Read In the Beginning (Archangel Jarahmael and the War to Conquer Heaven, Book I) Online

In the Beginning (Archangel Jarahmael and the War to Conquer Heaven, Book I)

BOOK: In the Beginning (Archangel Jarahmael and the War to Conquer Heaven, Book I)
>>DOWNLOAD HERE >>READ ONLINE NOW
ads 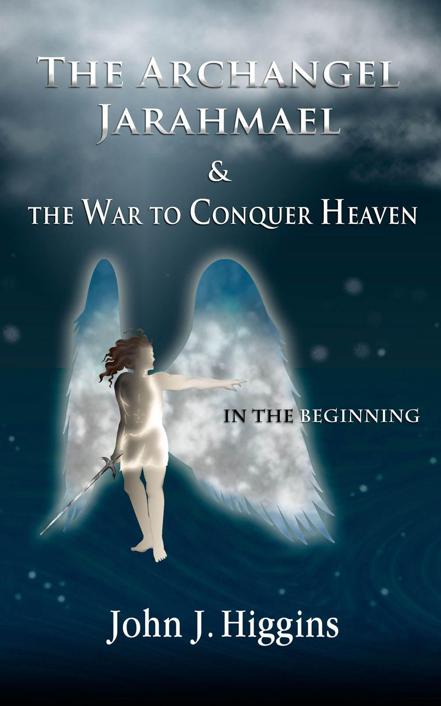 The Archangel Jarahmael and the War to Conquer Heaven

Archangel Jarahmael and the War to Conquer Heaven, Book I

This is a work of fiction. Any similarity with real persons or events is purely coincidental. Persons, events, and locations are either the product of the author's imagination, or used fictitiously.

THE ARCHANGEL JARAHMAEL AND THE WAR TO CONQUER HEAVEN

Book I: In the Beginning

To
the Almighty
who has guided me to this place . . .

The blue-tipped archangel flew through the open sky above Eden, passing through wisps of white clouds, searching the ground below very carefully. She must be here, he thought to himself as he descended towards the thatched hut that had been her home. He circled to make sure that her mate was not nearby: he wanted to be able to search without interruption. Leave his brother Archangel Michael and the Almighty to deal with the Human Adam.

Adam's mate had left him and was missing. The Almighty asked him, the Archangel Jarahmael, if he would go find her and bring her back to the Garden of Eden. Did the Almighty know about his feelings towards the Human woman? Did he approve of those feelings? Jarahmael had first seen her when he was off exploring and had ventured on his own into the Garden of Eden. Fascinating new creature she was, beautiful in a way he had not seen before in the Creation. She was a further development from the Simians, the first wingless angel-like creatures the Almighty had created from the clay of the planet Earth. She was more angel-like than the Simians, even Adam. She was the first earthen Being to have nearly white blonde hair and shining blue eyes. The Almighty had named her, Lillith, the sound of her name alone flooded Jarahmael with warmth and excitement.

Good.
Adam was not around as he landed by the hut near the center of the Garden of Eden. The Archangel had been flying over the landscape of Eden for most of the day and still had not seen any sign of the Human female. There were caves in the neighboring mountains where she could have hidden, but he had not had time to look there yet. He thought the best places to search would be the ones familiar to her. Besides, he thought he saw his brother Archangels Beelzebael and Sammuael fly off in that direction earlier. It was strange that they were here, as he was the only one assigned from the Seven Heavens to search for the Human, but maybe they decided to assist him on their own. Walking quietly, he ducked down to enter the hut where Lillith and Adam had been staying, to see if there were any clues as to where she had gone. Jarahmael knew they had been sleeping on straw and he could see the impressions left where the two Human bodies had slept. One was deeper and fresher than the other, slightly larger too. Around the bed were scattered some leaves and a few branches. He knew he had seen them somewhere before.
Didn't they come from the Tree of Life?

This would be the third night that she was missing. She had run away two nights ago, but it was only after she had been missing an entire night that Adam called out to the Almighty. Today had been the first chance Jarahmael had to search for her. He had been delayed, waiting for the Almighty's approval, before he could search for her, even though all of his thoughts had been focused on her since he first heard of her disappearance.

He leaned down to the straw and could smell her scent. He remembered the first time he had seen Lillith, while she was still one of the deeper secrets kept by the Almighty and Michael. Luciferael himself, the First Born of the Archangels did not even know of her and Adam's existence at the time. In fact, the rest of the Heavenly Host did not know of the Almighty's experiment in the Garden of Eden, He had kept it secret for some time.

The first time Jarahmael had seen her, she had been so stunning, bathing in the waters of the Garden of Eden. He could not take his eyes off her, and watched her every move. Her beauty made him feel as if he had entered a trance and was so taken with her that he had forgotten to make himself invisible as he approached, and blundered right upon her, in full view. He was drawn to her as if they always had known one another. It was a familiarity and comfort that made him feel they were part of the same energy. From the time of his creation his mind had always felt strongly connected to the Almighty and his brother Archangels, but this was different. Watching her, his body made of Light wanted to change into a solid form, satisfy this growing urge to get closer, much closer to her. Perhaps that was how earthen creatures feel.

He backed out of the hut, still looking at her impression on the straw as though he expected her to emerge. He turned around slowly, looking at the surrounding trees and lush plants in the Garden for any other signs of her. He spent quite a bit of time searching around the Garden as the day passed by. As the day was beginning to wane, he knew that he would have to come back tomorrow and continue the search. He could not stay much longer and still return to his palace in the Seventh Heaven before nightfall because he still had to pass through all the six lower Heavens to get back to his home.

He flapped his wings and began to slowly fly towards the sky, and as soon as he rose above treetop level, he saw Beelzebael and Sammuael emerge out of one of the caves and launch themselves upwards, flying rapidly into the Heavens.

That's odd, he thought. Jarahmael then wondered if they had spent this entire time off in that cave while he was searching.
What could the two of them have found there, that would have taken all that time?
He knew it was late and he should have been returning to his palace, but now he had to find out what they had been doing in that cave. Beelzebael and Sammuael were two of Luciferael's closest allies. Perhaps they weren't there to help find Lillith for the Almighty, maybe they were there to find Lillith for Luciferael. Or, he thought, it could be even worse. Maybe Luciferael wants them to destroy her!

Jarahmael made strong powerful thrusts with his wings as he altered course and pointed directly to the entrance of the cave. He felt it was better to be cautious, and landed outside the cave, the shadows of the trees nearby having lengthened, darkening the ground and the entrance. He quickly dimmed his brightness so he could slip in through the shadows.

Peering in the cave he did not see much within, but did notice that the cave went back quite a distance. Both Beelzebael and Sammuael had left empty handed. Whatever it was that kept Luciferael's Archangels busy in here must be in the back, he reasoned as he moved along the wall listening for any movement. As he approached the back of the cave he started to hear some soft breathing, and then beyond a slight turn in the cave he saw two glowing eyes swaying back and forth slightly, standing about six feet off the ground.

Jarahmael moved around this creature to make sure Lillith was not in its clutches, nor was there any danger lurking close-by in the darkness before increasing his own illumination. Jarahmael's brightness lit up the entire back section of the cave and he saw standing before him, one of Luciferael's creations, a serpent that he had seen before sneaking about in Eden. The serpent still stared straight ahead, swaying its head, its eyes remaining unfocused, not even looking at Jarahmael.

"Greetings!" Jarahmael said to the creature but it did not respond. Jarahmael walked around the creature looking for any signs of injury, but found none. The constant swaying seemed to be part of the creature's nature. Luciferael had created a number of Beings under the Almighty's authority, but these serpents, although beautiful in the coloration of their scales, were very strange. Trying to communicate with this creature seemed like a waste of time, but there must have been a reason why Beelzebael and Sammuael would spend so much time with the serpent.
There must be something more to it.

Perhaps if he tried to bind his mind with that of the creature, he could discover the reason for their visit. Jarahmael reached out his hand and touched the serpent on the back of its head while he looked into its eyes. A couple of visions flashed though Jarahmael's mind, the strongest of which was Sammuael telling the creature that he would forget all the details of what they had discussed. There was another flash recalling Beelzebael and Sammuael approaching the creature and then a few images of Lillith, fragments of earlier memories.

Unfortunately, Jarahmael could not identify all of the surroundings in the background of the serpent's memories of Lillith. There was no memory showing her in this cave, which was confirmed by the fact that Jarahmael had not seen any trace of her in here. Most of the fragments of the serpent's memories of Lillith had the lushness of Eden in the background, but Jarahmael had already searched most of Eden without result.

A sinking feeling came back to Jarahmael. Beelzebael and Sammuael had no qualms about destroying earlier life forms on the Earth. Was that the reason Luciferael would have sent the two of them to search for Lillith?

Jarahmael was sure he had seen whatever was left in this serpent's mind and there was little point in remaining here. Lillith would have no reason to come to this cave on her own, so she must be hiding elsewhere. Fortunately, Beelzebael and Sammuael had flown upwards into the Heavens, without Lillith. There was still hope. Jarahmael just needed more time to find her first. If he was having trouble locating her, she must be well hidden; hopefully Sammuael and Beelzebael would have the same difficulties in finding her.

Unlike Beelzebael and Sammuael, he decided he would not return to his home in the Heavens, but remain here in Eden and continue to search the caves overnight. There was a reason Sammuael erased this serpent's memory, and that meant Sammuael and Beelzebael now knew something more about Lillith's location than he did. He didn't know what they intended to do to her, but he knew he needed to find her first and bring her to safety.

Leaving the serpent in the cave just as he had found him, Jarahmael dimmed himself again so as not to emerge from the cave brightly lit and stand out in the darkness of the night. He needed to keep searching without drawing attention. As he emerged from the cave into the now darkened world of the Garden of Eden, he thought to himself, Life was so much easier in the beginning when it was only the Almighty and the Beings of Light in the Universe.