Read In the Dead: Volume 1 Online

In the Dead: Volume 1 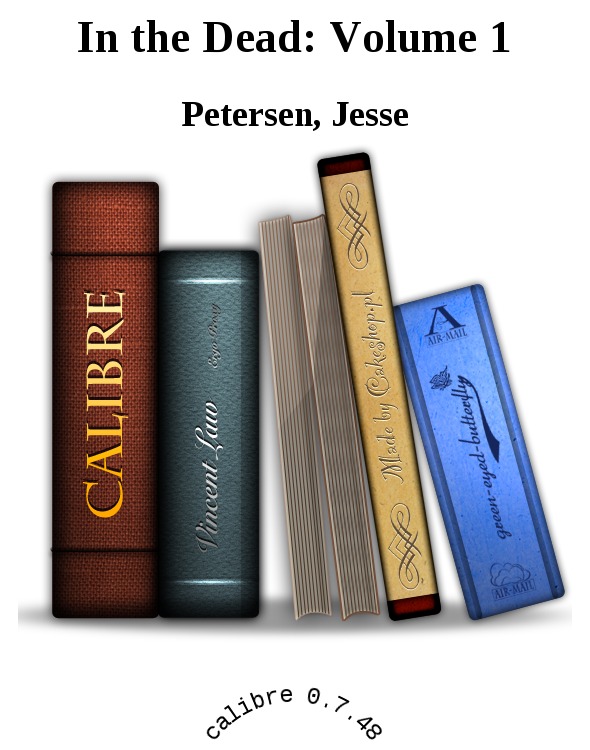 In the Dead: Volume 1

Check out these other books by Jesse Petersen:

Copyright Jesse Petersen, 2011
All rights reserved. No part of this book may be used or reproduced without written permission. For information address Jesse Petersen, PO Box 6205, Bloomington, IL 61702

Zander had been playing his game for six days straight. Not counting, of course, the occasional piss break and fridge run. This after he’d sat outside of a Game Hut, in the pouring Seattle rain, for three days, waiting for the store to do their midnight opening and hand over the copy he’d reserved six months before.

So he was almost ten days into his addiction. He smelled funky and he hadn’t seen another human in almost a week.

But it was worth it.

Bonewrecker 2
was the most awesome game ever made. Ever. Closely followed by
Bonewrecker: Origins
, of course. But now, he was watching the credits roll, naming off all the coders and voice actors who had filled his past week with such joy. And once that was done, he planned to log onto his online account and make the transition to the online version of the game.

“
At least it’s socializing,” he muttered to himself as he put one controller back into the recharging station and removed the other. He got up and stretched his back as the final
Thanks for Playing
screen flickered across his plasma TV. “Sort of.”

Well, others might differ with that opinion, including his ex-girlfriend, his former boss, his parents (rest their souls), but he was pretty happy with his life. Or lack thereof. So whatever. He had plenty of friends online who shared his hobbies. He would hook up with hardhabit1982 and glittergirl and shootfirst and soon they’d be shooting the shit (and some monsters and zombies) and saving the world.

He backed out of the game and into the main menu to highlight
play online
from the menu system.
Please wait, please wait, please wait…
He downed a sip of a very flat diet coke and rolled his eyes. Fuck the system was slow. Probably from everyone playing the game online. He always played story mode before he dove into online play. So everyone would be pretty far ahead of him.

Zander blinked at the screen. “What the hell?”

He pressed the
play online
icon a second time, but in a few moments it timed out again with the same notice.

“
Damn internet is down,” he grumbled.

For the next few minutes he tried all his tricks. He reset his box, he checked his connections, but every time he tried to play, the same
No Connection
message greeted him.

“
Fuck!” he grunted as he tossed the controller onto the couch and stomped to the door. It was probably the building. Having free internet was a perk of living in Garden Terrace Luxury Apartments, but during the day sometimes these spotty outages occurred when everyone was out at work. Everyone but him, of course.

He unlocked his door and stepped out into the hallway. Immediately, he blinked. The light was out in the hall. Not normal. Roger the super might be lax about important things like internet, but Zander had never known him not to replace a light bulb immediately. Roger had weird priorities.

Of course, by the time he’d had all these thoughts, his eyes had adjusted to the dim light and he could see the elevator at the end of the hall. But when he reached it and pressed the down button, it didn’t light. There was a faint buzzing from behind the door in the shaft.

“
Shit,” Zander muttered as he tried to slip his fingers in the space between the doors and jam them open. That didn’t work, of course.

He glanced at the stairwell. He was on the twelfth floor. There was no way he wanted to walk all the way down to the second floor where Roger’s apartment was located… and then find out the super was out. Because then there would be walking
up
the stairs after that and what the hell?

With a sigh, he looked back down the hall. He might not want to go find Roger, but he also didn’t want to go back to a no-internet gaming experience. So what were the other options?

He stepped over to 1212 and hesitated. Mrs. Floyd lived here. Fifty-five year old, extremely bitter divorcee. She hated him. Always turned her nose up at him in the elevator and her little dog (the one she carried in her purse) had tried to bite him like three times in the last year. But he really wanted to know if anyone else had internet, so…

He knocked and found himself praying she wouldn’t be home.

No such luck. He heard shuffling and muffled voices behind the door. But no one answered.

“
Great,” he muttered as he rolled his eyes. “Now she’s trying to pretend she’s not there.”

He knocked again, this time louder, but there was still no reply.

“
Hey!” he finally said, loud enough that he was sure whoever was inside would hear. “Sorry to bother you Mrs. Floyd, but I was wondering if you had internet? Mine is out and I’m just trying to figure out if it’s the building’s wireless or something about my connection.”

Now the muffled voices behind the door got loud and alarmed. Zander could have sworn he heard words like, “Internet? What the…? Monster!”

He gritted his teeth. “Look, I know you don’t like me, but I’m not a monster.”

There was another long pause and then the door opened, but it was only an inch. Mrs. Floyd still had the chain in place.

One of her watery blue eye poked into the open part of the door and she stared at him. “He looks… well, he looks like he always does.”

“
Of course I look the way I always do,” he snapped. “So do you have internet or not?”

Another female voice came from the apartment, this one way younger. “Open the door, Mom, I want to see this doufus.”

Zander blinked. Mom? He had no idea Mrs. Floyd had a daughter. She sounded young. And kind of hot.

The door shut in his face and then there was the sound of the chain sliding free of the lock. He rolled his eyes as the door opened. And then stopped to stare. There was a pistol being pointed right between his eyes.

He started as his stomach did a massive flip into his feet. He forced himself to look at who was pointing a weapon at his head and was surprised that it was Mrs. Floyd, herself, holding the pistol, without even a tremor. It was a Glock, he could now see that that he could breathe and really concentrate.

“
Walk into the apartment slowly,” she said. “And keep your hands where I can see them.”

Zander did as he was told, holding his arms out to his sides. As Mrs. Floyd shut the door behind her, he saw that a younger woman, probably about his own age, was also armed, though she had a sweet shotgot and she had it leveled at him, too. Her brown hair was pulled back in a slick ponytail and she was wearing a black tank top. She sort of looked like a heroine from a video game, which was awesome.

“
What the hell is going on?” he said as he backed up against the door.

“
Are you infected?” Mrs. Floyd asked in a no-nonsense tone.

“
In
…
fected
?” he repeated with a quick glance at the other woman. But she didn’t act like this was a weird question. In fact, her eyes narrowed and her finger was pressed firmly against the trigger. “What the hell are you talking about?”

The younger woman shook her head. “He’s
got
to be infected. They say they can manipulate for some time after infection but before full outbreak.”

“
His pupils aren’t red, though. And he doesn’t have any obvious bites.” Mrs. Floyd wrinkled her nose. “He smells terrible, but like Cheetos and sweat, not death.”

“
What the hell are you two talking about?” Zander asked as he did a quick pit sniff. Yeah, she was right, but that really wasn’t the point now. “Infected, red pupils, manipulation? Have you lost your minds?”

Or maybe he’d lost his… people told him if he didn’t get out of the gamer world, he might forget the real world. Could he be in a weird game-induced…
fugue
or something?

“
Are you seriously saying you don’t know what’s going on?” the younger woman said, her tone thick with incredulity. “Where the hell have you been?”

He shifted. “Um, in my apartment. Playing
Bonewrecker 2
.”

Mrs. Floyd stared at him. “Doing what?”

He glanced at the younger woman, sort of hoping she might help him out here, but she was still glaring at him, annoyed and completely unimpressed by his existence.

“
It’s a video game,” he admitted and was annoyed when hot blood rushed to his cheeks. Whatever. He had nothing to be embarrassed by.

“
A video game,” the younger woman repeated and slowly lowered her shotgun. “Seriously? You’ve been playing a video game for so long that you really don’t have any idea what’s going on?”

He nodded slowly. “Yeah, I guess not. What
is
going on?”

Mrs. Floyd lowered her Glock and walked away from him with a heavy sigh. “I don’t have the energy for this. I’m going to go check on our supplies.”

After she’d gone, the younger woman shook her head. “She doesn’t like you.”

“
You think?” he laughed. “Yeah, she’s always made that clear. So who are you? Her daughter?”

“
Zander,” he said, holding out his hand.

“
Zander the Gamer,” she replied without taking it. “Perfect. Look, I don’t have much more energy than my mother does, so I’m going to give you the short version. About five days ago, something happened in a lab on the University of Washington campus. A virus was released and it made… well, I guess you’d have to call them zombies. The whole city is pretty close to being wiped out. So basically, you missed the closest thing to Armageddon I can see. Congrats.”

Zander blinked and then looked around. The room looked normal. No hidden cameras. And the girl, Carrie, she didn’t seem high or crazy. She seemed totally serious.

She rolled her eyes. “Aren’t you? I mean, you don’t have any idea what’s been going on. Haven’t you heard the sirens outside? Your phone ringing? The yelling in the hallway?”

Zander bit his lip. “Well, I had headphones on for part of the time I played. Your Mom complained if I played too loud, so I started wearing them.”

She sighed. “I can’t believe you’re so out of touch.”

“
I can’t believe you’re trying to convince me there are zombies,” he replied, just as snotty as she was.

“
Okay, buddy,” she snapped and then headed for the terrace that was connected to the living room. She tugged the curtain back and slammed the sliding glass door open.

Zander followed her to the window, stepped out onto the concrete terrace and looked down the twelve floors to the ground. He gripped the metal railing with both hands and sucked in a breath.

Armageddon was an understatement. Smoke curled up from fires scattered as far as the eye could see in the forest of tall buildings. Cars were flipped on the streets below, crashed up on sidewalks and parked across intersections. And then there were the people, roving in big pods, jerking and wandering in a very zombie-like fashion.