Read In the Morning I'll Be Gone Online

In the Morning I'll Be Gone 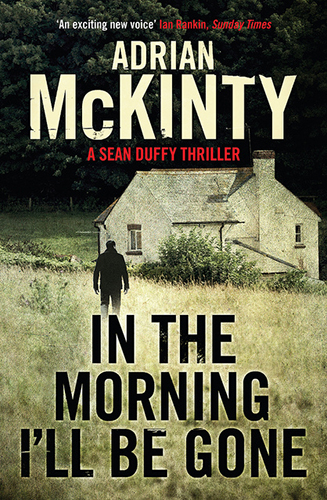 Published 2014 by Seventh Street Books™, an imprint of Prometheus Books

In the Morning I’ll Be Gone
. Copyright © 2014 by Adrian McKinty. All rights reserved. No part of this publication may be reproduced, stored in a retrieval system, or transmitted in any form or by any means, digital, electronic, mechanical, photocopying, recording, or otherwise, or conveyed via the Internet or a website without prior written permission of the publisher, except in the case of brief quotations embodied in critical articles and reviews. The characters, organizations, companies, products, and events in this book are fictitious. Any similarity to real persons, living or dead, or organizations or companies, currently or previously existing, or existing product names is coincidental and not intended by the author.

In the Morning I’ll Be Gone : a Detective Sean Duffy novel / by Adrian McKinty.

I Hear the Sirens in the Street

My friend you must understand that time forks perpetually into countless futures. And in at least one of them I have become your enemy.

10: Orla of the Golden Hair

13: The Encounter at the Rising Sun

22: Death in the Afternoon

The beeper began to whine at 4:27 p.m. on Wednesday, September 25, 1983. It was repeating a shrill C sharp at four-second intervals, which meant—for those of us who had bothered to read the manual—that it was a Class 1 emergency. This was a general alert being sent to every off-duty policeman, police reservist, and soldier in Northern Ireland. There were only five Class 1 emergencies and three of them were a Soviet nuclear strike, a Soviet invasion, and what the civil servants who’d written the manual had nonchalantly called “an extra-terrestrial trespass.”

So you’d think that I would have dashed across the room, grabbed the beeper, and run with a mounting sense of panic to the nearest telephone. You’d have thought wrong. For a start I was as high as Skylab, baked on Turkish black cannabis resin that I’d cooked myself and rolled into sweet Virginia tobacco. And then there was the fact that I was playing Galaxian on my Atari 5200 with the sound on the TV maxed and the curtains pulled for a full dramatic and immersive experience. I didn’t notice the beeper because its insistent whine sounded a lot like the red ships peeling off from the main Galaxian fleet as they swooped in for their oh-so-predictable attack.

They didn’t present any difficulty at all despite the sick genius of their teenage programmers back in Osaka because I had the moves and the skill and all they had were ones and zeros. I slid the joystick to the left, hugged the corners of the screen, and easily dodged their layered cluster bomb assault. That survived, I eased into the middle of the screen and killed the entire squadron as the ships attempted to get back into formation. It was only when the screen was blank and I saw that I was nudging close to my previous high score that I noticed the grey plastic rectangle sitting on the coffee table, beeping and vibrating with what in retrospect seemed to be more than its usual vehemence. I threw a pillow over the device, sat back down on the rug, and continued with the level. The phone began to ring and it went on and on and finally, more out of boredom than curiosity, I paused the game and answered it. It was Sergeant Pollock, the duty man at Bellaughray Station.

“Duffy, you didn’t answer your beeper!” he said.

“What’s going on, Pollock?” I asked him.

“Report to your local police station. This is a Class 1 emergency.”

“It’s big. There’s been a mass breakout of IRA prisoners from the Maze prison.”

“OK. But remember this is my off day so I’ll be on double time.”

“How can you think of money at a time like this, Duffy?”

“Another fine job from Her Majesty’s Prison Service, eh?”

“You can say that again. Let’s just hope we can clean up their mess . . . Listen are you OK with going to Carrick? I know you haven’t been back there since you were, uh, demoted. I could always send ya to Newtownabbey RUC.”

“Never fret, Pollock. I shall thrive on my native heath.”

I hung up and addressed the Galaxian fleet hovering silently on the TV screen: “Return to your alien masters and tell them that we Earthmen are not so easily crushed!” And with that I pulled the Atari out of the back of the TV and flipped on the news. HM Prison Maze (previously known as Long Kesh) was a maximum-security prison considered to be one of the most escape-proof penitentiaries in Europe. Of course, whenever you heard words like “escape proof” you immediately thought of that other great Belfast innovation, the “unsinkable”
Titanic
. The facts came drifting in as I put on my uniform and body armor. Thirty-eight IRA prisoners had escaped from H Block 7 of the facility. They had used smuggled-in guns to take hostages, then they’d grabbed a laundry van and stormed the gates. One prison officer was dead and twenty others had been injured. “Among the escapees are convicted murderers and some of the IRA’s leading bomb makers,” said an attractive, breathless young newsreader in the BBC studio.

“Well, that’s fantastic,” I muttered, and wondered whether it was anybody I’d personally put away. I made a cup of instant coffee and had a bowl of Frosties to get the Turkish black out of my system and then I went outside to my waiting BMW.

“Oh, Mr. Duffy, you won’t have heard the news!” Mrs. Campbell said to me over the fence. I was wearing a flak jacket, a riot helmet, and carrying a Heckler and Koch MP5 submachine gun so it wasn’t a particularly brilliant deduction from Mrs. C, but I gave her a grim little smile and said, “About the escape, you mean?”

She tucked a vivid line of burgundy hair behind an ear. “Yes, it’s shocking, they’ll murder us all in our beds! What will I do with my Stephen upstairs on disability?” Stephen’s “disability” was a steady diet of cheap gin and vodka, which meant that by lunchtime he was as pickled as Oliver Reed during the making of
The Three Musketeers
. She was a handsome woman, was Mrs. Campbell, even with her troubles and her 1950s nightdress and a fag-end hanging out of her mouth.

The Woman at the Window by Emyr Humphreys
Mind Games by Moore, TJ
Road's End: Apocalypse Riders by Britten Thorne
Through a Glass Darkly: A Novel by Karleen Koen
Mom Zone Mysteries 02 Staying Home Is a Killer by Sara Rosett
With His Protection (For His Pleasure, Book 15) by Favor, Kelly
The Bleeding Heart by Marilyn French
Lazarus Machine, The (A Tweed & Nightingale Adventure): 1 by Paul Crilley
Someone Is Bleeding by Richard Matheson
When You Don't See Me by Timothy James Beck