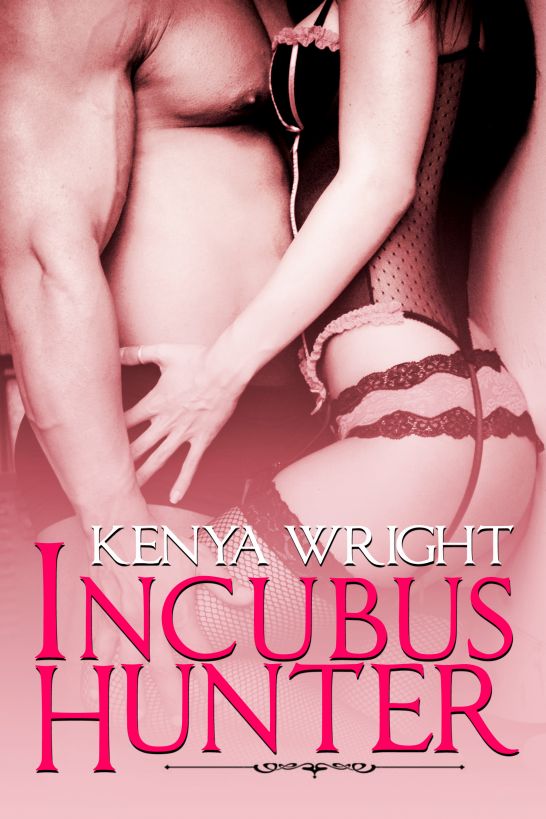 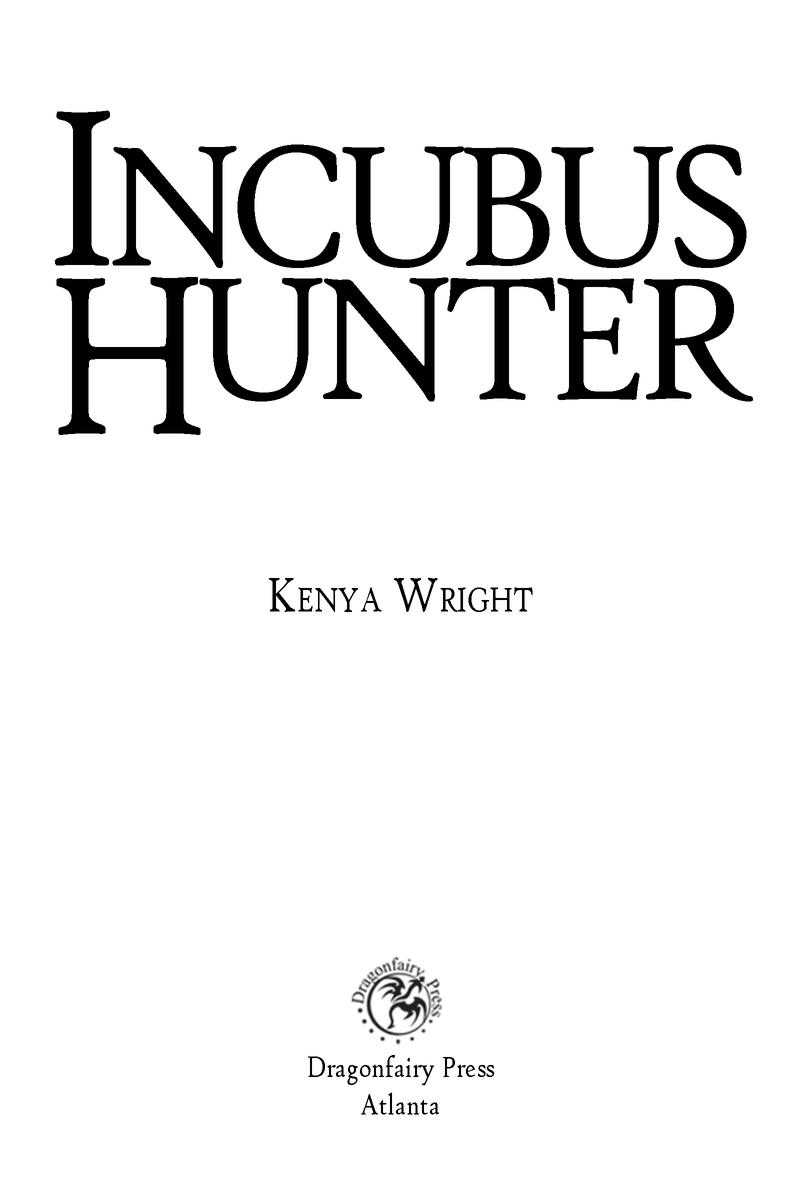 This is a work of fiction. All characters,
organizations, and events portrayed in this book are products of
the imagination or are used fictitiously.

Blaze fed from two blonde women’s arousal,
drawing their sexual energy into him. They kissed his face and
traced his rows of golden muscles with their tongues, completely
oblivious to the incubus demon’s actions.

Fanning cigarette smoke out of my face, I
took a large gulp of rum. A burning sensation traveled down my
throat. I crossed my legs, tapping my stilettos against the
bar.

A heart pumping song rocketed into a rapid
beat as the nightclub darkened. Laser projectors hanging from the
ceiling began blasting beams of multi-colored light through the
air. Hundreds of humans danced to the electric drum pounding out of
the club’s speakers.

This was an incubus demon’s perfect feeding
ground. No one here would be suspicious of a gorgeous man making
out with two women.

In fact, they’d root him on.

Blaze leaned back on the silver wall near the
dance floor and wore no shirt, just leather pants. The blondes
continued to stroke his muscular chest. His lips remained in a thin
line. His face displayed no emotion. He almost appeared bored.

That can’t be right.

Surely, being stroked by two seductive women
would be appreciated by any man, even one that was no longer human,
having been turned into a demon centuries ago.

I brushed my wig’s brunette strands out of my
face and raised my eyebrows as Blaze’s leather pants expanded and
stretched over his erection.

A third woman with long red hair strolled
toward him and rubbed her fingers through the mass of charcoal
black curls that framed his face.

How many women does he need to feed from?

Most incubi only had to drain one woman a day
to survive. Blaze had been feeding all night.

My sadistic boss, Adae, had given me an
inaccurate report on Blaze. I would have to curse Adae out
later.

I chewed the inside of my cheek, noticed what
I was doing, and forced myself to stop. Hopefully, Blaze hadn’t
trapped any other women into a spell and drawn them to him. He’d be
too strong, alert, and difficult for me to catch.

I finished my drink and scanned the crowded
club, from the silver and black striped door to the elevated VIP
area. No other women headed in Blaze’s direction. The humans were
all unaware, grooving to the song’s electronic cadence, lost in
their blissful moments. I longed to be carefree and untroubled like
them.

Regret rose in my heart. I gestured for my
waiter to fill my shot glass with another round of rum.

He hurried my way, immersing the area with
musk cologne. His smile widened and displayed perfect teeth. With a
wink, he topped my glass and left.

I swallowed the liquid down in one second,
welcoming the bitter sting to my tongue as the burning revisited my
throat.

I coughed, cleared my throat, and turned my
attention back to Blaze.

He now had his hand between one of the
blondes’ legs. The bulging muscles on his arms flexed as he plunged
his fingers back and forth into her.

I ran my fingers along the smooth edge of the
bar, witnessing the intense satisfaction flashing on the blonde’s
face.

Nothing passed through Blaze’s chocolate
brown eyes. He resembled a factory worker completing a task he’d
done many times before.

The blonde hiked her skirt up her thighs,
grabbed his shoulders, and rocked her hips into his hand while the
club’s music pumped around them and blended into a techno song.

She swayed with the new beat. Various colors
of light flickered over her lips. She flung them open. Ecstasy
crossed her face.

I licked my lips and then immediately stopped
myself.

The song slowed down and thumped at a
relaxing pace. The singer whispered French words over the
tempo.

With his hands still between the blonde’s
legs, Blaze buried his face into the redhead’s cleavage.

I shifted on the bar stool, nervously biting
my lip again. He was unlike any incubus demon I’d ever hunted.

The multi-colored neon light blended into
one, bathing the club in a deep blue.

My waiter came back to my side of the bar,
motioning to my empty glass as if asking me if I wanted another
drink. I shook my head no and immediately went back to watching the
demon, my heart pounding in my chest.

I was done drinking. Any more rum and I’d be
unable to concentrate on grabbing Blaze. I gazed his way and
froze.

I gripped the edge of the bar with my
fingers.

I scanned the crowd again, confirming that no
one else reacted to his eyes. Only me.
Perfect.
Humans
wouldn’t see the glow, but other supernaturals would. I didn’t want
any other incubus hunters trying to take my bounty.

Centering my attention back to Blaze and his
women, I noticed the redhead’s hands dive into her own jeans,
fondling and pleasuring herself.

I took my cell phone out and checked the
time. An hour had already passed. Most incubi fed for a while and
then left.

Sliding off of the barstool, I placed a big
tip on the table and strolled in Blaze’s direction, maneuvering
through dancing humans, drunks stumbling around the club, and
suspicious characters exhaling marijuana smoke.

My candy red strapless dress ended at the
middle of my thighs. I tugged it down a little to reveal more
cleavage. A few couples bumped into me, mainly men and women that
rubbed against each other, gyrating to the song’s pulsating
rhythm.

You got it, Carmen. Same type of demon, just
another day.

I blew out a large breath and pulled the
dress down some more until it was an inch above my nipples.
That
will get his attention
.

I had to capture him tonight. The bounty for
Blaze was two million dollars. It would clear my debt with Adae and
release my daughter.

You can do this
.

By the time the song ended, I arrived in
front of Blaze and set my hands on my hips.

Blaze focused those crimson eyes on mine. His
nostrils flared for a second.

Is he smelling the air?

I seized that opportunity to take a closer
look at his face.

My breath caught in my throat.

I knew he was good-looking, but I had no idea
how attractive he would be close up. His golden skin radiated
sensuality. I immediately wanted to touch it and discover if it was
as smooth as it seemed. He had luscious lips that were made for
kissing and sucking. His charcoal curls lazily hung around his
arched eyebrows, highlighting his chiseled cheeks and square
jaw.

He took his hand away from the blonde’s
leg.

She whimpered, grabbed for him, and shrieked
as he blocked her with his other hand.

I remained frozen in place, unsure of what I
should do next. Marijuana smoke drifted by my nose, but I refused
to wave it away. I needed to appear human.

Would a human woman be shocked by his actions
or in some sort of magical haze?

“Ladies, could you excuse me for a minute,”
he said in a deep voice, reminding me of a blues song’s seductive
notes. “I’d like to talk to my new friend.”

His eyes transformed from crimson red back to
pools of chocolate.

All three women’s eyes changed to their
regular colors.

Both blondes had blue eyes.

The redhead had emerald green. She blinked a
few times, leaned her head to the side, and looked back and forth
at me and Blaze. Confusion spread across her face, shading her
cheeks to rosy red. Her hand went to her throat, clutching a silver
necklace. She backed away from us, with her mouth open wide.

The blondes silently stumbled away, glancing
from side to side in shock. They grabbed each other’s hands and
avoided looking in my direction.

Perhaps they were friends and had come to the
club together. A drunk guy approached them and they waved him
away.

“You didn’t have to stop your party. I
would’ve joined.” I glanced at the curve of Blaze’s pecs and the
thick rows of golden muscle around his waist. My fangs ached inside
my gums, wanting to pierce his skin and taste him.

“Maybe next time.” He gazed intently at me,
curling his lips at the edges. His power thickened in the air,
vibrating against my skin like a gentle massage. He was nothing
like the lower level incubi I’d captured.

Fear crept up my spine.

I forced myself to remain where I was
standing and brushed my wig’s brunette waves behind my ears.

“But at least you have all of my attention.”
He placed his hands in his pockets and remained leaning on the
wall.

“Yes. And you have all of mine.” I glided my
hands up from my hips to the curve of my breasts, giving myself an
unintentional shiver.

In a blur, he appeared behind me, pressing
his hardness into the curve of my ass. “I hope that wig wasn’t for
me.”

My heart pounded in my ears.

I blinked twice and glanced at him over my
shoulder.

“You reek of heated honey. I knew you were an
elf when you first walked into the club. I’ve been drinking in your
scent all night.” A laugh escaped those luscious lips. “Why wear
the wig?”

“It’s for the humans.” I tried to calm the
fast pace of my heart.

Damn you, Adae. You never said Blaze was this
fast.

I cleared my throat. “My pointy ears usually
freak humans out. I’ve found that a wig hides them better than my
natural hair but—”

“Fuck these humans.” He pulled the wig off my
head. My ginger corkscrew curls fell down my face and past my
shoulders. He leaned in closer and laid his hands on my waist,
sending warmth through my dress’s fabric. “Much better.”

The club went silent. I looked around and saw
the glossy film of a massive bubble surrounding us. My nerves
flared on edge. I’d never had a demon do this before.

I opened my mouth, unsure of what to say next
as the woody fragrance of juniper mixed with pine surrounded
me.

“Let me look at you.” I attempted to turn
around, but he prevented my movement as he massaged my waist. The
simple contact stirred a hunger within me.

His fingers drifted up the outline of my
body. He guided me further to the smooth silver wall in front of
me.

Marooned! by Brad Strickland, THOMAS E. FULLER
No Laughing Matter by Carolyn Keene
Before the Dawn by Beverly Jenkins
Solaris by Stanislaw Lem
Nobody's Obligation (Swimming Upstream #2) by Rebecca Barber
An Invitation to Scandal by Kelly Boyce
Nevada by Imogen Binnie
An Ensuing Evil and Others by Peter Tremayne
Program 12 by Nicole Sobon
The Watchful Eye by Priscilla Masters