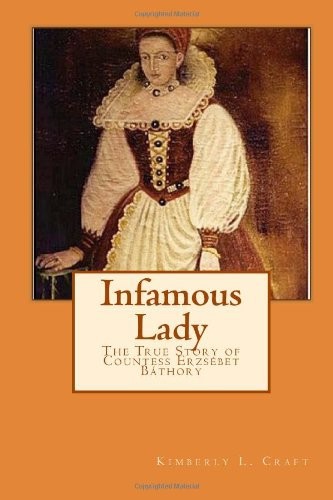 THE TRUE STORY OF

© 2009 by Kimberly L. Craft. All rights reserved. No part of this publication may be reproduced, stored in a retrieved system, or transmitted, in any form or by any means, electronic, mechanical, photocopying, recording, or otherwise, without prior written permission of the publisher. Printed in the United States of America.

World’s Worst Female Serial Killer. Over 650 servant girls murdered. Vampire drinks and bathes in the blood of her victims. Witch, lesbian, and sadist. Walled up alive in castle tower.

Had she lived today, the media—including the tabloids—would most certainly offer headlines like this about a most unusual Hungarian countess who lived four hundred years ago. Years ago, I happened to overhear a conversation. A young lady made a remark in passing to her friend about this particular woman, Countess Erzsébet (Elizabeth) Báthory of Hungary.
The friend had never heard the name before, and that caused the first young lady to explain: “She’s the world’s worst serial killer.”

“She killed over 600 people,” the first woman continued. “She bathed in the blood of her victims and was finally walled up in her castle.”

The friend remembered the story now, perhaps from an old horror movie.
“Yes, but was it true?” she asked.

“Yes, she was a real person, and she’s in the Guinness Book of World Records.”

Intrigued, I myself wondered why someone who had killed over 600 people—someone listed in, of all things, the Guinness Book (albeit as the world’s worst
female
serial killer)—was not a household word, particularly given the public’s fascination with “true crime” stories.

Some preliminary research quickly demonstrated that facts could not easily be separated from fantasy. Unlike other documented accounts of criminal personalities, the elaborate tales and legends woven around this particular figure had turned her into something of a caricature or cartoon character. On the one hand, she was a member of Hungary’s ruling elite, the wife of a national war hero, and descended from an old and illustrious noble family. On the other hand, she was a lesbian vampire witch who bathed in the blood of 600 victims whom she had tortured to death before writing about each in her diary. She attempted to preserve her youth and beauty through sorcery and murder, and the story of her final punishment—being walled up alive within a tower—prompted both books and horror movies, all retelling the ghastly story. It is said that Countess Báthory inspired both the Brothers Grimm as well as Bram Stoker; even a metal band by the same name found its inspiration in her. Yet, it didn’t make sense. The vampire stories could be brushed aside as superstition but, logistically, how would a member of the aristocracy, someone who managed vast estates, even have
time
to kill so many people? How could someone who attended the emperor’s court maintain her position in polite society if so much killing was going on? Where would she even stash so many bodies? And why were so many of her victims young girls?

The more I researched the subject, the more I discovered how strange this story really was. Countess Báthory was truly an enigma: uncovering, or recovering, her story became something of an obsession. I was particularly interested in the legal aspect. Her accomplices were tried and convicted while she, herself, was never tried—yet still convicted. Over 300 witnesses testified, but only a handful claimed to have actually seen her do anything wrong. As for the body count, those with knowledge testified to perhaps 50 dead over a period of decades; one or two thought the count was possibly as high as 200. In fact, the allegation of 650 victims came only from a single source—an unknown servant girl, still in childhood, who based her entire claim on hearsay.

There was, indeed, apparently much more to this story, all of it buried under the rubble of history: ruthless politics, relentless religious wars, blood-feuds with Ottoman Turks, and the crumbling vestiges of feudal society struggling to retain its power. In the end, I discovered, as always, that truth was indeed more interesting than fiction.

That said, many decisions had to be made during the preparation of this work. Proper names, for example, posed a particular problem: should they be spelled in the original language or in English? Should variant spellings be given? Four hundred years ago, few people were literate, and recordkeeping was not an exact science. In official court documents and letters, the same person’s name could be spelled two or three different ways and, in some cases, even phoenetically by the scribe. As far as possible, I decided to use formal spellings, in the original languages, for proper names; however, for the reader’s convenience, I have also included all of the variant spellings whenever possible.

Researching this project posed a particular challenge. Of all the material written about the Countess, much of it is fictional, speculative, or inaccurate. My challenge was to find as much original source material as possible. That said, the material would then have to be translated from Hungarian, Slovak, Latin, or German and finally reconstructed into a (hopefully) more accurate portrait of this woman and the events surrounding her life. Unfortunately, little information is available today. While other noble families of the time maintained and, to this day, still have historical archives in their names, none exists for Countess Báthory. As for the actual trial transcripts, various versions were already in existence at the time when they were originally written, some even with marked differences.

We know without doubt that Erzsébet existed, but we cannot find the site of her burial today—crypts allegedly housing her remains have supposedly been found empty. Thus, researching this work became quite the treasure hunt. The mystery of the Countess grew deeper and deeper, and finding the elusive fragment of a letter, document, or some other original source was very much like striking gold. For the interested reader and fan of this subject material, however, I am sure you will experience the same excitement that I did upon discovering what I promise will be fresh and new material on the Countess. In many cases, the information presented here is being published for the very first time in English: well over a year was spent researching and translating original source material.

Finally, in an effort to keep the content interesting yet reliable, I have written some of the material in the form of literary vignettes—snippets of detail that read in story form—using as much original dialogue as possible. The dialogue and scenes have been recreated from trial transcripts and witness depositions. Some artistic liberty has been taken since we do not know every detail, but the reader can be assured that there is more fact than fiction.

In the end, I have attempted to put together the best documentary possible on the Countess. I apologize to the reader in advance, however, since it is not, and never will be, perfect. In addition, the work will never truly be finished, since it will continue to evolve over the years as more information comes to light. It is, however, an honest effort to provide new information on the riddle of Erzsébet Báthory, her alleged activities, and the various conspiracies surrounding her personally. In some ways, she herself was a victim, and that, more than anything else, may be the most interesting facet of the so-called Blood Countess.

On the evening of December 29, 1610, a party of armed men arrived at the manor house of Castle Csejthe, in what was then the Kingdom of Hungary. The man in charge was the palatine (prime minister) of Hungary, György Thurzó. The other two nobles following behind him were Counts Nicolaus Zrínyi and György Drugeth de Homonnay, and the last, Squire Imre Megyeri. They were accompanied by a large party of armed guards. The men had been to this place before and moved in quickly.

Lying near the entryway, they found the body of a young girl who had been beaten to death. Struck by the mutilated condition of her body, they paused for a moment and then headed inside. They found two more young girls who had also been stabbed and beaten—one would die later, the other maimed for life. Moving through the manor house, they followed the sounds of screaming. Opening a door, they came upon three old women and a young man, all servants of Countess Erzsébet Báthory, in the midst of torturing one of the girls, with another sobbing child waiting to be taken next.

The beatings stopped suddenly as the men in arms quickly moved in to apprehend the four servants. Securing the suspects, they then made their way toward the private apartments of the 50-year-old Countess Erzsébet Báthory—also known to them as the Lady Widow Nádasdy. When they came upon her, she stared for a moment and then screamed at the crowd, “What is this intrusion? You shall all pay for this!”

And then slowly, in the dim light, she began to recognize exactly who these men were: the Prime Minister of Hungary, whom she affectionately called “cousin”; her two sons-in-law, Counts Zrínyi and Drugeth; and her son’s tutor, Imre Megyeri.
“Lady Widow Nádasdy,” the Palatine said, “In the Name of the King, you are hereby under arrest.”
“That’s ridiculous!” she laughed. But her expression quickly changed as the men came for her.

Hurling insults, the Palatine pulled her by the hair and rushed her through the manor house. He demanded that she take a hard look at the carnage and her four accomplices, now being put in chains. Disheveled but defiant, the Countess said nothing.
Furious, Thurzó turned to his men.
“Secure these four, and then take this bestial woman up to the castle. Search it from top to bottom!”

Outside, nearly thirty men from the town of Csejthe had gathered. The grim procession made its way toward the castle, determined now to discover the truth behind the rumors.

The day after her arrest, December 30, 1610, Palatine György Thurzó wrote to his wife:

My greetings and update, Beloved Heart!

I arrived here at Újhely yesterday evening in good health, thank God. I apprehended the Nádasdy woman. By now, she has been led away to the castle above. Now, those who tortured and murdered the innocent—those evil women in league with that young lad who in silent cruelty assisted with their atrocities—were sent to
Bytča. They are under
guard and will be held in strict captivity until, God willing, I arrive home to bring the strong justice they deserve. The women can remain imprisoned in the town, but the young lad must be confined at the castle.

As for our people and servants that I brought with me, when my men entered Csejthe Manor, they found a girl dead in the house; another followed in death as a result of many wounds and agonies. In addition to this, there was also a wounded and tortured woman there; the other victims were kept hidden away where this damned woman prepared these future martyrs.

I am just waiting until this cursed woman is brought to the castle and the others’ destination is determined, and then I break away and hope, if the way permits, that I make it home by tomorrow. May God grant it!

Fallen from Grace by Songstad, Leigh
Happy Together: 500 Things to Do for and With by Ken Shafer
This is Just Exactly Like You by Drew Perry
A Mother's Love by Mary Morris
The Descendants by Kaui Hart Hemmings
The Elemental Jewels (Book 1) by Jeffrey Quyle
Assassin's Baby (A Bad Boy Romance) by Amber Branley
A Method Truly Sublime (The Commander) by Farmer, Randall
Jack Davis Mystery - 01 - Shakedown by Joel Goldman
Captured Heart by Angelica Siren