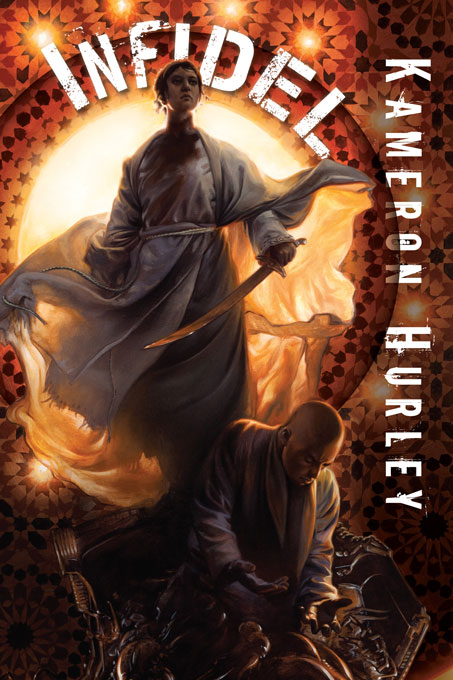 This edition of
Infidel
© 2011 by Night Shade Books

Please visit us on the web at

So long, and thanks for all the brutal women.

Do not be deceived: “Bad company ruins good morals.”

T
he smog in Mushtallah tasted of tar and ashes; it tasted like the war. Mushtallah was nearly a thousand miles from the front, but the organic filter surrounding the city couldn’t keep out the yeasty stink of spent bursts and burning flesh blowing in from the desert.

Nyx pulled on a pair of goggles and stepped over a dead raven. Dusty feathers, dog shit, and edible receipts clogged the gutters. Ahead of her, the pale, stupid-looking Ras Tiegan kid she was charged with keeping alive made her way down the crowded sidewalk, swinging her shopping bags ahead of her. Her name was Mercia, and she was daughter to the Ras Tiegan ambassador to Nasheen. The ambassador’s kid covered her hair like most Ras Tiegans, though on choking days like this one, most everyone did. Mercia had big dark eyes and a flat nose like her mother’s that gave her a distinctly foreign profile. The rest of her was awkward and gangly. Her hips were so bony she could have forced her way through the crowd without the bags. Rich Ras Tiegan girls were all too skinny.

Nyx moved around a tangle of women dancing outside a cantina blaring southern beat music. The tangy smell of oranges and saffron wafted out over the sidewalk. Nyx kept track of the time by counting the number of wasp, locust, and red beetle swarms buzzing by, delivering messages of a far higher caliber than she’d been entrusted with in years.

A bedraggled young vendor sat at the corner on a mat, holding up a “Paint your own prayer rug!” sign in one hand and a jar of zygotes covered in a sheen of ice flies in the other. Nyx’s footsteps slowed as she passed. If she’d still been a bloodletting bel dame, she’d have chopped off the woman’s head and collected the inevitable bounty on her. These days, women selling illegal genetic goods were policed solely by bel dames. There was a time when the vendor would have been spooked at Nyx’s approach. Nyx had been better dressed, better armed, and better supported, once: running with her bel dame sisters instead of a cocky boy shifter and reformed venom addict. Now, instead of collecting blood debt, she was babysitting diplomats and cutting up petty debtors when the First Families paid her in hard currency. It felt more honest. But a lot less honorable.

The woman shoved the jar of zygotes at her.

“Ten hours of viability left,” the woman babbled. “Good price in the pits for these!”

Invoking their name produced the desired effect. The woman’s eyes got wide. She jerked away from Nyx and collected up her illegal genetic material and her prayer rugs, then disappeared quickly and quietly down an alley.

Nyx looked up to see Mercia stepping into the doorway of a boutique selling conservative swimwear with tunics and hoods, oblivious of her spat with the vendor. Nyx slowed down. They were already in a better part of town than Nyx was used to—illegal merchants aside. With her whip at her hip and the hilt of a sword sticking up from a slit in the back of her burnous, she looked about like what she was: a bounty hunter, a mercenary, a body guard. Somebody hard up and dishonorable, like a woman just discharged from the front.

Nyx leaned against an unguarded bakkie—real risky, leaving them untended—to ease some of the pain in her back and knees. She wondered where she could get a hit of morphine this early in the day. She’d slept ten hours the night before, and thirteen the night before that. Too much sleep, even for a woman who bartered her organs for bread on occasion—one more reason she wasn’t a bel dame anymore. Yet here she was, rubbing at her eyes before noon. She thought about going back and seeing her magician, Yahfia, and getting swept for cancers. Frequent trips to the magician kept her team relaxed. Eshe, her kid clerk, and Suha, her broken-nosed weapons tech, were a good crew, but they still had a lot of blind faith in magicians and bug tech. They thought that anybody who could afford to get patched up by a magician lived forever. Nyx knew better.

Nyx’s charge walked out of the storefront. Mercia’s pale face, flat features, and the cut of her clothes drew the stares of small children. A pack of adolescent girls in chain mail and boots snickered at her. The Queen was half Ras Tiegan, and since the brutal turn in Nasheen’s war with Chenja five years before, the Queen and Ras Tieg weren’t nearly as popular as they’d once been. The war hadn’t been going well for Nasheen in almost a decade; there were boy shortages, rogue magicians, problems with the bel dame council, and one of Nasheen’s primary munitions compounds had been bombed out the year before; a blister burst that would keep the area contaminated for half a century at least.

Bad for Nasheen—good for business.

Nyx watched the Ras Tiegan kid. She wondered what the hell the kid had found in there that required another three bags. Shit, probably. The foreign kids were all buying shit these days.

“Carry this, will you?” the kid said, holding out the bags.

Nyx crossed her arms and spit a bloody wad of sen on the sidewalk. She was trying to give up whiskey. Replacing it wholesale by upping her sen habit had seemed like a good idea. Better to dull pain than dull thought. The kid, though, said she was allergic to sen and didn’t like the smell. Ras Tiegans were frail little roaches.

“A what?” the kid said. Daughters of diplomats took to languages like terrorists to water reservoirs, which meant the kid didn’t have an accent. Nyx sometimes forgot that most Nasheenian slang was beyond her.

The kid looked put out. “My mother says you’re to do what I say.”

“Well, you and me can chat with your mother about that when we next see her,” Nyx said. Nyx had acted babysitter to the daughters of diplomats enough times during the Queen’s summits to know that the bugs would be silent for a good long while yet. Hopefully after the kid’s mother deposited Nyx’s fee.

“You need a sherpa, I’ll hire a girl for you,” Nyx said, and eyed the tail-end of the pack of girls in boots. Nyx wasn’t so washed up yet that getting one of the girls into bed was all that ridiculous an idea. Young girls loved old bel dame stories.

“You’re not very accommodating,” the kid said. She sounded like some rich nose, one of the First Family women who lived up in the hills and sneered down at the sprawl of humanity they still called “the colonials,” a thousand years after the last battered ship of planetless refugees was allowed onto the planet. Anybody who happened to bump into Umayma these days en route to somewhere else was either rerouted or left to orbit the planet and die a slow death by asphyxiation. Nyx had heard that when they still had the ability, the Families had the magicians blow up the ships. On those nights there was enough light in the sky to read by. That’s what the old folks nattered about, anyway.

“My mother says you’re the best in the business,” Mercia said.

Nyx started moving down the street again, and the kid tagged after her. “No, just the cheapest,” Nyx said. That was mostly true.

“But not easy to buy out?” the kid said slyly. Nyx had already considered pulling out the kid’s sharp tongue. Probably be some monetary penalty for that, though.

“My mother wouldn’t have hired you if you were.” The kid pulled out a berry-smelling sweet stick and started sucking at it like a coastal infant. How old was she? Ras Tiegan girls all looked younger than Nasheenians. She might have been eighteen or nineteen, but didn’t look or act a day over fifteen.

“Takes some faith in your mother’s smarts to trust that,” Nyx said.

“She’s a diplomat,” the kid said, like that meant something.

“I’ve known some stupid diplomats.” Hell, Nyx had
killed
some stupid diplomats. Countries like Heidia and Druce paid good money to diplomats who “lost” family members while on foreign assignments, especially in Nasheen and Chenja. The first illegal note she took during her short bel dame career was for a Heidian deputy ambassador’s husband.

“My mother isn’t one of the stupid ones.”

Nyx watched a woman stepping out of a storefront ahead of them. The pitch to her walk as she came out told Nyx that she’d begun the movement from a standstill, loitering in the doorway, and the bag at her hip was holding something far heavier than the shoe brand it advertised.

Ahead of them, Nyx saw two more women standing alongside an otherwise unguarded bakkie. Never could say what made her watch some women closer than others. Maybe they tried too hard to look like they had nothing to do.

The bakkie was missing its tags. Missing tags meant the women were either bel dames or somebody doing black work. Generally, the sorts of people who illegally trafficked in bugs, people, and organs were gene pirates, mixing and matching blood codes and selling them illegally to the breeding programs in Nasheen and Chenja. Nyx had run that kind of black work before. She knew enough about it to know she didn’t want to have anything to do with the people running it.

As Nyx moved to get herself between the kid and the sidewalk, the women hanging around the bakkie too-casually turned their backs to her.

Nyx rolled her shoulders. The kid said something about a Ras Tiegan holiday where children wore funny hats.

Nyx saw a gap in the sidewalk traffic and grabbed the kid by the elbow. She steered her into the street.

Ravens’ feathers stirred around their ankles. The kid tensed under her fingers and went real quiet. One of the benefits of working with kids used to kidnapping attempts was that they knew when to shut up.

With her other hand, Nyx reached behind her where she kept a scattergun strapped to her back. She was a bad shot, but a scattergun would hit just about anything in the general direction she aimed it.

As they walked into the street, Nyx felt a rush of dizziness, as if her head was floating somewhere over her right shoulder. A gray haze ate at the edges of her vision. She shook her head and blinked. Too old for this, she thought.

A cat-pulled cart rolled past. A rickshaw driver swore at her. Dust clotted the air. The cats stank. The kid started sneezing. Mercia’s mother had said she was allergic to cats, too. And oranges. And cardamom. And a hundred other things. Nyx half-expected the kid to burst into hives at the sound of raised voices.

Nyx pushed the kid ahead of her and glanced at the cart window. She saw the reflection of the sidewalk behind her where the woman with the shoe bag was hastily stepping after them.

The kid dropped the slobbery sweet stick into the street.

“Suha,” Nyx said. Saying Suha’s name triggered the bug tucked into the whorl of cartilage at the entrance to her ear canal.

The Coven by Cate Tiernan
A Wilder Rose: A Novel by Susan Wittig Albert
Shades of Black by Carmelo Massimo Tidona
The Hunt Club Chronicles Bundle by Heather Boyd
Granny by Anthony Horowitz
Act of Betrayal by Sara Craven
Deceptive Nights by Sylvia Hubbard
Before I Sleep by Rachel Lee
Claimed by the Billionaire: Seduction #1 by Danielle Jamesen
The Power of the Dead by Henry Williamson