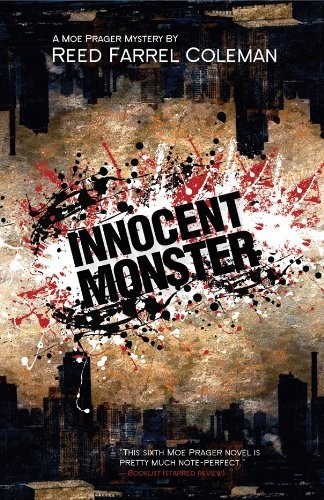 They Don’t Play Stickball in Milwaukee 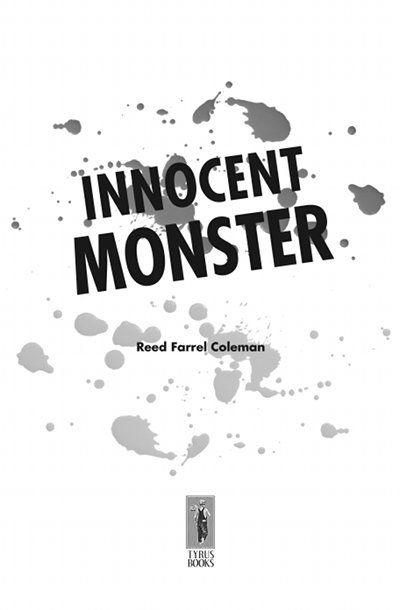 No part of this publication may be reproduced or transmitted in any form or by any means, electronic or mechanical, including photocopy, recording, or any information storage or retrieval system, without permission in writing from the publisher.

Any similarities to people or places, living or dead, is purely coincidental.

This work has been previously published in print format under the following ISBN:

I owe more than I can say to Peter Spiegelman for his editorial suggestions and his endless patience with me. Many thanks to Jonathan Santlofer for helping me navigate my way around the perilous fringes of the art world. Thanks to Marla Bayles, PhD, Ellen W. Schare, and Sara J. Henry. I also want to say that I am grateful to Tyrus Books, Busted Flush Press, and my agent David Hale Smith for finding a way to allow readers to once again walk the streets of Brooklyn with Moe as their guide.

Love to
Rosanne, Kaitlin, and Dylan.

Katy’s blood was no longer fresh on my hands and after 9/11 people seemed to stop taking notice. I stopped trying to scrub it away. With all due respect to Lady Macbeth, there isn’t enough soap or hot water to get those stains out and scouring brushes are impotent at guilt. Jews know from guilt. So do Catholics, but they know it differently. Jews know you can’t pray it away or confess it away and that there is no number of good acts that will balance the ledger sheet. Guilt is a tattoo and, if you’re lucky, it will fade. 9/11 faded my tattoo. Besides, in a world awash in blood, what’s one life, give or take?

Even my daughter Sarah started talking to me again, if only once a week and then with a robotic detachment that hurt me more than her year of silence ever did. In the wake of 9/11 all of us New Yorkers were really just robots there for a little while. So it was that the pain of my divorce from Carmella and the dissolution of our partnership barely registered. It had taken twenty years of secrets to destroy my first marriage and about twenty minutes to destroy my second. I wondered if there were Las Vegas odds on how fast I could fuck up a third? I missed Israel, Carmella’s son by another man and, for a very brief time, mine in every other way that mattered. But he was less than a year old when Carmella moved up to Toronto and I doubt he misses me. At my age, on the other hand, you start to spend a lot of your time missing people: some living, some dead, some just gone.

Although Carmella and I were no longer partners, I kept our firm, Prager & Melendez Investigations, Inc., open, at least until the end of our lease. And I couldn’t see putting Brian Doyle and Devo on the street because my marriage fell apart. It turned out to be one of those rare things done with best intentions that paid unexpected dividends. Sometimes the road to profit and not just to hell is paved with good intentions. Business boomed in the months following 9/11, but it was an odd kind of business. Other than our contract insurance work, we continued looking for people. That hadn’t changed. It was the nature of the people we were hired to find that had changed.

Suddenly our clients, especially the ones forty years old and up, had an urgent need to reconnect with people who’d fallen through the cracks in their lives. We had a lot of jobs finding old flames and first loves, childhood friends, teammates and coaches, even black sheep relatives from the “wrong” side of the family. National tragedy fucks with people’s heads. And in those days when Chicken Little screamed that the sky was falling, no one seemed inclined to argue. But the sky didn’t fall and, in terms of our once burgeoning caseload, the affection for reconnection waned.

That was six years ago now: our lease long expired, the office long closed. Brian Doyle and Devo have opened their own shop in lower Manhattan, scavenging off a better class of lice than on the Brooklyn side of the river. Currently, no one needs to pay to find anyone, not anymore. Well, at least not to find old flames or high school football heroes. You can find them where you find everything else in the world: on the Net. And if you don’t find them, just count to ten, and they’ll find you. Ah, the internet. Ten years ago I told Aaron to stop wasting our money on online advertising and building a topnotch website. He didn’t listen. Now internet sales accounted for about twenty percent of our business. So much for my business acumen, but the Net wasn’t all magic. If you want to find an ex who’s skipped town and is two years in arrears on child support payments, you might still consider using a professional investigator.

These days I was a professional wine merchant. Period. I didn’t even know where my PI license was or if it was still valid. Somewhere along the way I moved it out of my sock drawer and haven’t seen it since. I think I might hunt it down one day and make a collage of it and my equally valueless shares of Enron stock. But for now, I was too busy being bored numb and sleepwalking through preparations for the summer grand opening of our second Long Island store—Sunrise and Vine in Bridgehampton—to worry about the toys in my attic. Tucked away there in the basement office of my favorite store, Bordeaux In Brooklyn, I was so enraptured by the details of the local ordinances concerning exterior commercial signage that I nearly forgot to breathe.

“Are we on speaker phone?”

“How do you know something’s wrong?”

“Why would we fight?” she asked.

“Because if I answer your question about how I know something’s wrong, you’ll get pissy with me.”

“I know because you’ve called me once a week, every Sunday morning at eleven, for the last six years. Whenever you break that schedule, something’s wrong. That, and I can hear it in your voice. I guess there are still some things you can’t hide from me.”

She answered with silence, a noisy silence. I could hear her gears turning as she decided how to react. We had once been as close as a dad and daughter could be. No more. Sarah blamed me for her mother’s murder. That made two of us. I hadn’t pulled the trigger, but, in my way, I was just as guilty as the man who did.

She finally spoke. “Can you meet me for lunch?”

“I’ll see you at New Carmens on Sheepshead Bay Road in an hour and we can talk about it.”

All of four years old, Sea Cliff ‘s own Sashi Bluntstone is already a world-renowned artist. She first put paint brush to canvas at eighteen months of age and has yet to stop. She sold her first painting at age two to local collector and patron of the arts Sonia Barrows-Willingham of Glen Cove.

“I paid a mere five hundred dollars for ‘Pistachio Sprinkles,’” said Barrows-Willingham, gesturing at a canvas on the brick wall at the Junction Gallery in Sea Cliff. “Best five hundred dollars I ever invested. Just last month, I was offered twenty-five thousand for it. But I wouldn’t care if they offered me twenty-five million for it. I just love all of her work. It’s marvelous. I have several of her works and plan to add more. Don’t you just love them?”

Four-year-old Sashi, busy chasing her friends around the gallery, seemed completely unfazed by all the hoopla surrounding her first big showing. An apparently normal kid in most ways, the green-eyed and russet-haired prodigy is shy with most adults, but when she opens up, her favorite subject isn’t art, it’s her beagle puppy Cara.

The young Miss Bluntstone, whose work is most often categorized as Neo-Abstract Expressionism, is not without her detractors and doubters.

“At best, the child’s an unwitting shill for her ambitious parents. At worst... I don’t even want to consider it,” says Wallace Rusk, curator at the nearby Cold Spring Harbor Museum of Modern Art. “The child is being mercilessly exploited, which, if she were actually any good, might be understandable, if not forgivable. But it’s just so much kitsch and finger painting in the guise of high art.”

Yet in the face of withering criticism, nothing could dampen the palpable excitement in the crowded gallery. If there were any Sashi doubters or detractors on hand, they weren’t very vocal. There were abundant smiles and sales seemed brisk as gallery owner and art agent Randolph Junction delighted in placing red dots—marking the pieces as “sold”—on the small, white name placards next to each painting.