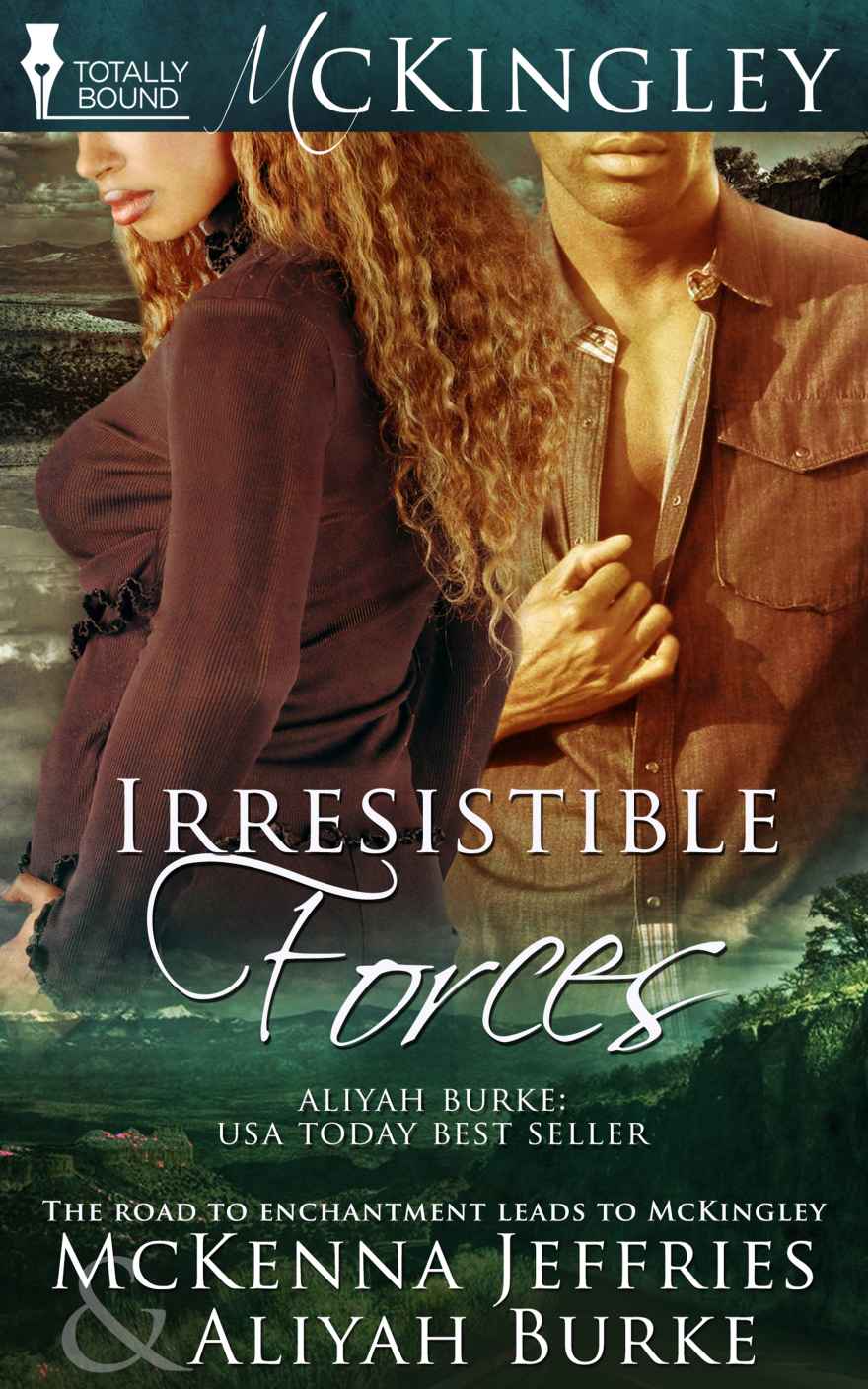 This book contains sexually explicit content which is only suitable for mature readers. This story has a
heat rating
of
Total-e-burning
and a
sexometer
of
1.

This story contains 112 pages, additionally there is also a
free excerpt
at the end of the book containing 10 pages.

Book five in the McKingley Series

When desire flows over it makes two head-strong people realise they are powerless under the onslaught of pleasure.

Leonardo Wright has been fighting his attraction to the sexy diva that gets under his skin like no other woman. Deyon is one woman who he can’t seem to resist. She is a family friend but he wants to take their relationship to another level. But he wants to do so on his terms…however when dealing with Deyon, she plays by her own rules and her passionate nature will not let him do as he wants. Take it slow and easy and build something lasting. Leo gives in and holds on for a journey that will bring him the one thing he wants more than all else—Deyon’s heart.

Deyon De’clare
is not prepared to wait for any man to make a decision for her. Leo wants to be involved with her…and he thinks it will be the way he wants it. He is very wrong. Whatever they have will be by both their terms—a mutual meeting of minds, body and souls. At least that is the plan if she can get the stubborn sheriff to understand that she is not a woman who does anything unless she wants to. And she does want Leonardo Wright more than she’d ever expected. But when you’re playing with matters of the heart, you have to give in to those irresistible forces.

To my brother who, as a police officer, protects and serves, thank you. To my sister thanks for passing on your love of reading and your support.

To the men and women who sacrifice so much to protect this country.

Thank you for all you do.

Leonardo Wright tapped his finger on the steering wheel as he drove towards his destination. Suddenly, a car going way too fast zoomed past him. Leo narrowed his eyes, recognising the night blue Audi S8—he flipped on his lights and went after the sporty sedan. From the type of vehicle, he figured the driver had been at business meetings today instead of at her store.

They continued driving above the posted speed limit. Leo knew she saw him, but she was thumbing her nose at him. Suddenly she made a turn and he clenched the wheel tightly, already mumbling the lecture he would be giving her. He followed and drove through the gates that lead to the oasis she had created. The automobile came to a screeching halt between the Sierra 2500HD crew cab and Toyota Land Cruiser, also in blue. The woman he was chasing was partial to blue. Leo parked behind her then turned off his cruiser.

Her car door swung open and one leg appeared, coming to rest on the ground. Leo studied the bare leg from the knee down until he saw the silver, high-heeled sandal. The rest of the woman came into view and he held the wheel, studying the beauty that was Deyon De’clare. She turned to face him, putting her hands on her hips. On her lush lips was a familiar teasing grin, which only made her captivating features even sexier. The face that had graced many runways and magazines—thus making her the most recognised full-figured supermodel in the world—was framed by wild, kinky hair. She wore shades, but Leo didn’t need to see her curly lashed, light-grey eyes to know they had the same teasing in them.

Although she wasn’t a model anymore—instead now a sought-after designer that catered to full-figured women—Deyon certainly knew how to capture one’s attention. She was her own best advertisement that curves were indeed beautiful, sexy and able to bring a man to his knees. As usual, Deyon was dressed stylishly. A dark royal blue with silver patchwork design shirt sloped off one shoulder, highlighting her rich caramel skin. The shorts were the same blue—without the silver—and stopped at her knees. Deyon bent into her car. Leo exited his cruiser before closing the door, gaze locked on her full ass. He clenched and unclenched his fists, aching to touch the round globes. Deyon stood, pushing her hair back with long fingers. She faced him again, holding a purse and briefcase then, using her hip, she closed her car door. Deyon strode towards him—her innate grace, power and all out sensuality of her walk another thing that made her successful as a model. Her movement had a rhythm that made his heart pound and his palms sweat. Leo kept his face contained.

“Leonardo, are you here to return my weapons?” Deyon’s melodious voice held playfulness.

Leo knew she was very serious. The question was the same one she had been asking him for a few months, just varied in the way she phrased it. It had begun around the same time she’d started calling him by his full first name instead of the shortened version as she had usually done before. Deyon pushed her shades up onto the top of her hair. She studied him.

“No, I’m holding them until you promise me that you won’t pull them on anyone again. When are you going to press charges?” he gave his standard reply.

“Admit it. You’re using my weapons. I bet they aren’t even at the station but at your house. You’re overstepping your authority, Sheriff.” Deyon paused, her brow furrowing, then she said, “As I’ve told you
ad-nauseum
, I only pulled them to defend myself when that fool grabbed me. And for the millionth time I’m not pressing charges. I handled it, and he won’t be working for me anymore. Leave it alone, Leonardo.” There was a sharp snap to her tone.

It was then that Leo noticed the strain on her face. Deyon might be acting like everything was okay, but clearly something was wrong. He noted the sweat beading on her forehead, her jaw was working and her gaze was slightly unfocused—he knew her well enough to know she wasn’t feeling well. For that reason, he’d leave the incident at her house—when a male model she had hired for a show hadn’t taken no for an answer—alone for now. Although he knew Deyon would not press charges because she’d handled it by tranqing the overzealous man before calling him, Leo still enjoyed needling her about it. Until that incident, he hadn’t realised how much an irate Deyon was a turn on. He focused on her, seeing her wavering where she stood under the unrelenting New Mexico sunlight.

“Come on into the house.” He slid his hand around her waist.

It was a testament to how ill Deyon must have been feeling that she didn’t resist. She let him lead her to her house. This close to her, the scent of coconut and peaches wafted to him. His member hardened as he imagined tasting every inch of her skin, following the intoxicating aroma. Leo was grateful Deyon, who usually noticed too much, was too distracted to realise his problem—his uniform wasn’t made to hide an erection. The fragrance was from the lotion Deyon used, which she had specially made at a store in town. There was so much he knew about Deyon. She was a close friend to his sister Arissa and had, by extension, become a part of the Wright family. Leo saw neither Arissa nor Jackson’s cars were parked in their slots to the right of the house. They were staying in the two apartments that made up the second floor of Deyon’s home. The place was an architectural vision that suited Deyon very well. She’d created a haven on this land with lots of space between her place and anyone else’s.

Deyon fumbled for her keys. Leo moved her hand gently away and slid his fingers into the pocket of her shorts. He bit back a groan at being this close to the curvaceous hips he longed to be buried between. Leo pulled out the keys and efficiently opened the door, keeping his other hand on her waist to steady her. Deyon leaned against him heavily.

“I can’t believe you drove and you were feeling like this. Recklessly and fast too.”

“I had to get home before it hit,” Deyon mumbled.

“You don’t get them often but even you know it can be dangerous if the migraine hits and you’re behind the wheel of a car.” Leo led her inside, kicking the outer door closer with his foot.

He glanced at the key ring and found the correct one. A little away, one on the left and another on the right of the centre door, were entrances that led to the apartments upstairs. Leo put the key in the lock of the middle door, pushing it open. The lights came on automatically. Deyon whimpered, pressing her face against the side of his neck. Leo shifted, cradling her, and reached for the lights. He switched them off, darkening the massive living room. Leo lifted Deyon and started towards the master suite.

“If you fall, we’ll both have to lay here until someone finds us.” Deyon sounded amused by the idea.

“Hush, I know your house as well as I know my own,” Leo stated.

“Thank God for that because I really didn’t want to be on the ground,” Deyon replied in a soft voice.

“Walk, and if I fell, crawl until I was at least inside the door. Rissa, Deiter or Jackson should be home soon and they would have gotten me the rest of the way.”