It Won't Hurt a Bit 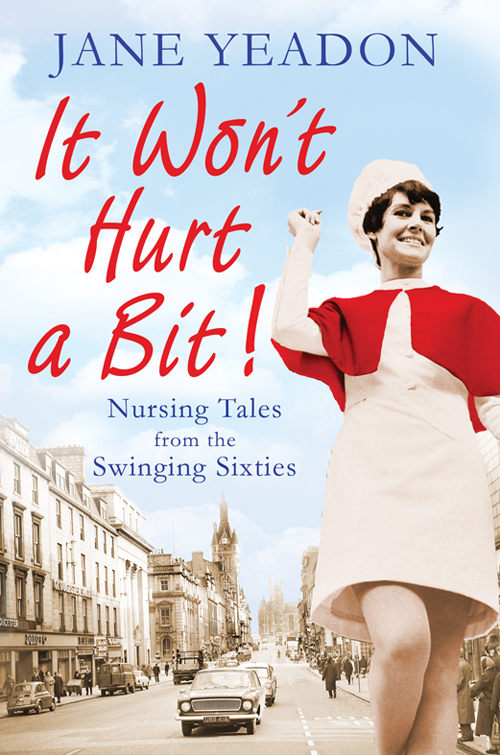 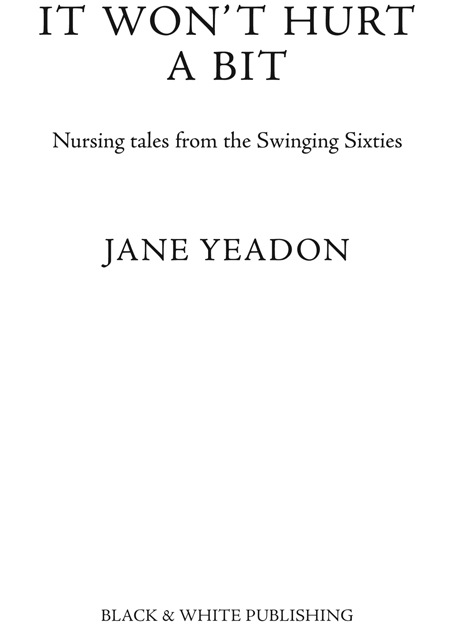 To David, Joanne and Mark

Thanks to Diana Stainforth and Harry Bingham of The Writers’ Workshop for their knowledge and help, the Black & White Publishing team for their grace, Mike Guild for his writing residence, Alister and Kenny my Brora wordsmiths, and medical experts and pals Roseann and James.

2
THE FIRST LINE OF DEFENCE

4
STEPS IN THE RIGHT DIRECTION

5
A VISIT TO THE GRANITE CITY

6
A SMALL MATTER OF AN INTERVIEW

14
SETTLING IN IF NOT DOWN

29
TYPHOID TAKES ME TO A SPECIAL CLINIC

30
THE JOYS AND JINGLES OF CASUALTY

35
CORPSE ON THE LOOSE

38
CHRISTMAS IN THE WORK HOUSE

I owe a lot to Alison-Mary Mackintosh – and even more to her nose bleeds.

In a classroom of such boredom that a sneeze would be an attention grabber, my friend was about to provide something a little more exciting.

‘Alison-Mary! You’re bleeding all over your desk and jotter.’ Our teacher had grown as pale as my pal. ‘Look, go and drip elsewhere. Take someone with you. And ok, take Jane if you must. At least she’s showing a bit of interest in
something
for a change.’ She shoved us out of the classroom at a speed suggesting First Aid definitely wasn’t her subject.

Apart from her name, there wasn’t much of Alison-Mary, and with the blood moving into a steady gush, soon there might be even less. I took her arm, piloting her to the nearest sink, unconvinced by her sanguine, ‘Happens a lot. It’ll stop in its own good time.’

I didn’t want her to know I was wondering where I could get a stretcher rather than the chair I’d suddenly, with a surge of importance, grabbed from the classroom. Handing over my one clean hanky and turning on the tap, I went for, ‘But not before the geography class finishes. Maybe if you feel faint we could stretch it till lunchtime. Here, sit down and lean over the sink. I don’t want to clean the floor.’

In the end, Alison-Mary was right, but not before a conversation regarding our future.

‘Think I’ll be a brain surgeon – see where all the blood comes from – and you’d be good at being a nurse,’ she’d said. ‘You don’t panic and must’ve registered I might faint.’

It would be nice to think that in my new, assertive chair-grabbing mode in the classroom I’d also shouted, ‘And we need a basin!’ That would have been even more dazzling, but in all honesty I can’t remember. It was a long time ago.

The Swinging Sixties, actually. An allegedly wonderful time of sex, drugs and rock’n’roll. Whilst at home on a Scottish upland farm, only the calendar recorded those years, and the nearest I was getting to anything swinging was the udder of our cow on her way to the milking shed.

And certainly my 1962 school wasn’t about to encourage reasoned debate with its young. I might have become Alison-Mary’s regular accompanist during her nosebleed tours and been charmed to have been asked by the odd concerned teacher for an opinion on her state of health, but it went no further. Even the social interaction in a school bus full of pupils returning to their rural homes could bring trouble.

One particularly warm sunny day, with the beginning of a new school year stretching interminably ahead, I was summoned to the rector’s office. I could have reached it blind-folded. With its dusty books and papers spilling over every surface, it had a sort of seedy charm, but this wasn’t a social call and it wasn’t a congratulations on Care of the Nosebleed Volume 5 either.

‘Jane, you’re over sixteen now but the bus driver’s complaining about you … again. Going home in particular, you’re acting like a kid, distracting everybody with your capering, teasing and shouting – shouting!’ Behind his desk, the headmaster boomed out his fury.

Coming from somebody who used his own voice so frequently and to foghorn effect in the school corridors, I thought that a bit rich and went for a gentle correction, ‘It’s just high spirits.’

His face went so purple I thought he was going to reach for the belt, coiled like a waiting serpent beside him. I might be too old for that but, just as bad, he was stretching for the phone. His fat fingers trembled round the receiver.

‘Rowdyism that’s what it is, I’m going to have a word with your mother. It’s a pity you’re not like your conscientious sister and that she’s left school – she used to keep you in order. Now, get out!’ He was already dialling.

We lived two miles beyond the bus route, though the steep cycle run home never felt half as uphill as the schoolwork. Poor Mum, I thought, pedalling hard against the strong prevailing wind, another bad-news phone call and now that Beth’s gone to university, there’s nobody to help with an ever-increasing load of homework for subjects that are completely boring in a place that feels like a jail.

I’d grown to love the idea of being a nurse. Those occasional forays with Alison-Mary had made me feel important, useful, even valued, and I’d learnt that practical help could make an immediate difference. I’d even found a posh word for my friend’s nosebleeds.

‘Next time, tell the teachers you’ve got epistaxis,’ I’d said.

She looked doubtful, but I thought it was a lovely word with an official stamp guaranteed to impress.

I pedalled on, consoling myself: schools didn’t keep you forever and there must be some point when, exams over and aged seventeen, I could head to the Big City, hit the high spots, train to be a nurse and look after people too ill to be interested in Latin declensions or split infinitives.

There was little traffic or action on the quiet country road home, but for all its isolation, the words of Bill Hayley and the Comets should reach these northern parts. Aiming for the future I sang, ‘One, two, three o’ clock, four o’clock – rock,’ the energy absent in school now powering the pedals so fast and throwing the words so high, they should have formed a vapour trail.

‘Five, six, seven,’ the last hill before home would need a gear change.

‘Adios amigo,’ I sang into the clear pure air of the back of beyond, reasoning that at the very least, Jim Reeves, the original singer, would’ve been impressed by a lung capacity which bounced off the hills.

Home at last, I threw the bike into the usual bed of nettles and was greeted by Bob the collie herding hens into a reception committee in our yard. They clucked outrage but Bob’s bark was welcoming even if he smelt vile.

‘Don’t let that dog into the house,’ my mother yelled through an open window, ‘he’s been rolling in something horrid.’

‘Sorry, old thing,’ I said, gently closing the door on him.

Mum was making porridge for the barn cats and seemed remarkably calm and intent on stirring a gluey mess over the stove. I breathed again. Maybe the phone call had been to someone else. Planning to take Bob for a walk to the river, where a dip in the water would sort out his personal hygiene and I could tell him how horrible the rector and school were, I tried to sidle past.

‘Hold it, Jane! I had Old Man Shanks on the phone today.’

For someone who’d been at the end of what must have been an awkward call, she sounded amazingly calm, eyes as glued to the pan as the contents were to its bottom. Maybe so many calls had made her immune, but she looked pleased so I stopped looking for excuses and began to hope for a miracle.

There was a tantalising pause and then she blurted out, ‘How’d you like to leave school?’

I sat down, stunned.

‘There’s a ward maid’s job going in Grantown’s Ian Charles Hospital. I spoke to the matron about it today and she said it might be a good idea for you to go there and get some work experience – see if you really want to go in for nursing.’ The stirring had slowed down as if conveying doubt but she carried on, ‘It’s just a wee hospital and it’ll be hard work but you’re really going nowhere in school and I don’t think I could stand another phone call. Old Man Shanks sounded as if he was going to have apoplexy and you wouldn’t want that on your conscience, would you?’

‘Very caring, I must say. Anyway, Matron says that Aberdeen’s Foresterhill will accept you for training on the strength of you passing its exam and having a decent interview. D’you think you’d manage that?’

I stood up, stretched and opened my arms wide, ‘Of course! And leave?’ I tried not to scream. ‘Leave? Mum, you must know that’s the best thing I could ever imagine. But when?’

‘Now. Well, as soon as you’ve handed back your books.’

‘And what did you say to the rector?’

The porridge was making a gentle boiling-point plopping sound.

‘That’s about ready,’ Mum pulled the pan to the side. ‘I probably sounded like that,’ she mused. ‘Anyway, it seemed to soothe him and to be frank, Jane, I think he’s glad to see the back of you. You’ve really been disruptive and not only in the school bus apparently. Anyway, with your practical bent, you’re more likely to get your education from the big bad outside world and he agreed.’

‘Well then I do believe in miracles,’ I grinned. ‘That must’ve been some phone call, and what does Dad say?’

‘We’ve been talking about it for a while now. He’s all in favour. Says he can’t stand the strain of homework either.’

‘Damn tractor’s broken down again and did I hear my name mentioned?’ My father stood in the doorway carrying enough silage aroma to mask the smell of burning porridge. With his arms covered in grease and his dungarees caked in mud, he looked like a man not so much broken as disillusioned by the wheel. He mopped his brow and leant his back against the door lintel. ‘My back’s killing me too. Never mind the nursing, what about being a physiotherapist. That’d be real handy.’

‘I’m not clever enough for that, Dad. I’d need lots of Highers. Anyway, it’s easier getting into nursing
and
I’m really good at treating epistaxis.’

Mum raised an admonitory wooden spoon. ‘I don’t know why you don’t just call it a plain nose bleed – and I imagine there’ll be a bit more than that to deal with. As a career, nursing’s no bed of roses. Blast! There’s Bob!’

He bounded in, tail fanning the smell of old bones, to charge the air with a heady mixture of glue, silage and porridge. Mum was right. Stopping blood flows and dabbing eau de cologne to fevered brows in hospital would prove as unlikely as fragrance in its sluices. Still, leaving school meant freedom and a step nearer my dream.

2
THE FIRST LINE OF DEFENCE

Ten miles and in the other direction from Forres, Grantown was too far to cycle home from every day. I would have to live in at the hospital tucked away on the outskirts of a town whose douce exterior might, hopefully, hide an exciting nightlife.

Dad took me there. ‘We’ll be hearing from you when you’ve time and you be sure and hing in,’ he said. Then, with an encouraging nod and valedictory toot of the car horn, he was gone in a cloud of black exhaust before I could say, ‘I’ll miss you.’