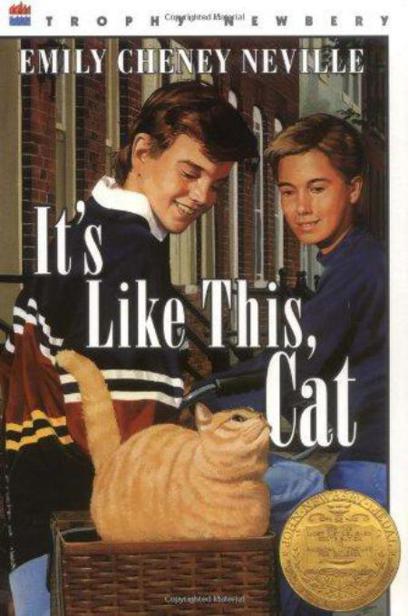 Copyright © 1963 by Emily Neville
Printed in the United States of America. All rights reserved. No part of this book may be used or reproduced in any manner whatsoever without written permission except in the case of brief quotations embodied in critical articles and reviews.

Chapter 2. Cat and the Underworld

Chapter 10. Cat and The Parkway

My father is always talking about how a dog can be very educational for a boy. This is one reason I got a cat.

My father talks a lot anyway. Maybe being a lawyer he gets in the habit. Also, he's a small guy with very little gray curly hair, so maybe he thinks he's got to roar a lot to make up for not being a big hairy tough guy. Mom is thin and quiet, and when anything upsets her, she gets asthma. In the apartment – we live right in the middle of New York City – we don't have any heavy drapes or rugs, and Mom never fries any food because the doctors figure dust and smoke make her asthma worse. I don't think it's dust; I think it's Pop's roaring.

The big hassle that led to me getting Cat came when I earned some extra money baby-sitting for a little boy around the corner on Gramercy Park. I spent the money on a Belafonte record. This record has one piece about a father telling his son about the birds and the bees. I think it's funny. Pop blows his stack.

"You're not going to play that stuff in this house!" he roars. "Why aren't you outdoors, anyway? Baby-sitting! Baby-talk records! When I was your age, I made money on a newspaper delivery route, and my dog Jeff and I used to go ten miles chasing rabbits on a good Saturday."

"Pop," I say patiently, "there are no rabbits out on Third Avenue. Honest, there aren't."

"Don't get fresh!" Pop jerks the plug out of the record player so hard the needle skips, which probably wrecks my record. So I get mad and start yelling too. Between rounds we both hear Mom in the kitchen starting to wheeze.

I slam the record player shut, grab a stick and ball, and run down the three flights of stairs to the street.

This isn't the first time Pop and I have played this scene, and there gets to be a pattern: When I slam out of our house mad, I go along over to my Aunt Kate's. She's not really my aunt. The kids around here call her Crazy Kate the Cat Woman because she walks along the street in funny old clothes and sneakers talking to herself, and she sometimes has half a dozen or more stray cats living with her. I guess she does sound a little looney, but it's just because she does things her own way, and she doesn't give a hoot what people think. She's sane, all right. In fact she makes a lot better sense than my pop.

It was three or four years ago, when I was a little kid, and I came tearing down our stairs crying mad after some fight with Pop, that I first met Kate. I plunged out of our door and into the street without looking. At the same moment I heard brakes scream and felt someone yank me back by the scruff of my neck. I got dropped in a heap on the sidewalk.

I looked up, and there was a shiny black car with M.D. plates and Kate waving her umbrella at the driver and shouting: "Listen, Dr. Big Shot, whose life are you saving? Can't you even watch out for a sniveling little kid crossing the street?"

The doctor looked pretty sheepish, and so did I. A few people on the sidewalk stopped to watch and snicker at us. Our janitor Butch was there, shaking his finger at me. Kate nodded to him and told him she was taking me home to mop me up.

Kate dragged me along by the hand to her apartment. She didn't say anything when we got there, just dumped me in a chair with a couple of kittens. Then she got me a cup of tea and a bowl of cottage cheese.

That stopped me snuffling to ask, "What do I put the cottage cheese on?"

"Don't put it on anything. Just eat it. Eat a bowl of it every day. Here, have an orange, too. But no cookies or candy, none of that sweet, starchy stuff. And no string beans. They're not good for you."

My eyes must have popped, but I guess I knew right that first day that you don't argue with Kate. I ate the cottage cheese – it doesn't really have any taste anyway – and I sure have always agreed with her about the string beans.

Off and on since then I've seen quite a lot of Kate. I'd pass her on the street, chirruping to some mangy old stray cat hiding under a car, and he'd always come out to be stroked. Sometimes there'd be a bunch of little kids dancing around jeering at her and calling her a witch. It made me feel real good and important to run them off.

Quite often I went with her to the A & P and helped her carry home the cat food and cottage cheese and fruit. She talks to herself all the time in the store, and if she thinks the peaches or melons don't look good that day, she shouts clear across the store to the manager. He comes across and picks her out an extra good one, just to keep the peace.

I introduced Kate to Mom, and they got along real well. Kate's leery of most people, afraid they'll make fun of her, I guess; my mom's not leery of people, but she's shy, and what with asthma and worrying about keeping me and Pop calmed down, she doesn't go out much or make dates with people. She and Kate would chat together in the stores or sitting on the stoop on a sunny day. Kate shook her head over Mom's asthma and said she'd get over it if she ate cottage cheese every day. Mom ate it for a while, but she put mayonnaise on it, which Kate says is just like poison.

The day of the fight with Pop about the Belafonte record it's cold and windy out and there are no kids in sight. I slam my ball back and forth against the wall where it says "No Ball Playing," just to limber up and let off a little spite, and then I go over to see Kate.