Read The Mushroom at the End of the World: On the Possibility of Life in Capitalist Ruins Online

The Mushroom at the End of the World: On the Possibility of Life in Capitalist Ruins

BOOK: The Mushroom at the End of the World: On the Possibility of Life in Capitalist Ruins
>>DOWNLOAD HERE >>READ ONLINE NOW
ads 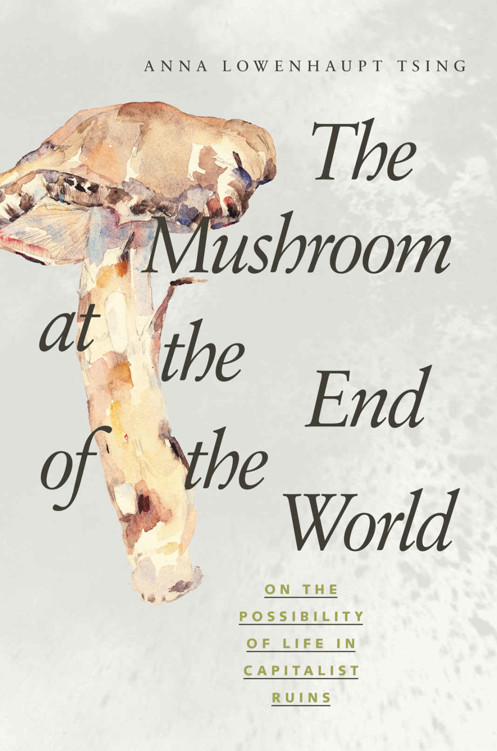 The Mushroom at the End of the World

The Mushroom at the End of the World

On the Possibility of Life in Capitalist Ruins

In the United Kingdom:

COMING UP AMONG PINES
…

…
IN GAPS AND PATCHES

PART IV In the Middle of Things

SPORE TRAIL. THE FURTHER ADVENTURES OF A MUSHROOM

E
VER SINCE THE
E
NLIGHTENMENT,
W
ESTERN PHILOSO
phers have shown us a Nature that is grand and universal but also passive and mechanical. Nature was a backdrop and resource for the moral intentionality of Man, which could tame and master Nature. It was left to fabulists, including non-Western and non-civilizational storytellers, to remind us of the lively activities of all beings, human and not human.

Several things have happened to undermine this division of labor. First, all that taming and mastering has made such a mess that it is unclear whether life on earth can continue. Second, interspecies entanglements that once seemed the stuff of fables are now materials for serious discussion among biologists and ecologists, who show how life requires the interplay of many kinds of beings. Humans cannot survive by stomping on all the others. Third, women and men from around the world have clamored to be included in the status once given to Man. Our riotous presence undermines the moral intentionality of Man’s Christian masculinity, which separated Man from Nature.

The time has come for new ways of telling true stories beyond civilizational first principles. Without Man and Nature, all creatures can come back to life, and men and women can express themselves without the strictures of a parochially imagined rationality. No longer relegated to whispers in the
night, such stories might be simultaneously true and fabulous. How else can we account for the fact that anything is alive in the mess we have made?

Following a mushroom, this book offers such true stories. Unlike most scholarly books, what follows is a riot of short chapters. I wanted them to be like the flushes of mushrooms that come up after a rain: an over-the-top bounty; a temptation to explore; an always too many. The chapters build an open-ended assemblage, not a logical machine; they gesture to the so-much-more out there. They tangle with and interrupt each other—mimicking the patchiness of the world I am trying to describe. Adding another thread, the photographs tell a story alongside the text but do not illustrate it directly. I use images to present the spirit of my argument rather than the scenes I discuss.

Imagine “first nature” to mean ecological relations (including humans) and “second nature” to refer to capitalist transformations of the environment. This usage—not the same as more popular versions—derives from William Cronon’s
Nature’s Metropolis
.
1
My book then offers “third nature,” that is, what manages to live despite capitalism. To even notice third nature, we must evade assumptions that the future is that singular direction ahead. Like virtual particles in a quantum field, multiple futures pop in and out of possibility; third nature emerges within such temporal polyphony. Yet progress stories have blinded us. To know the world without them, this book sketches open-ended assemblages of entangled ways of life, as these coalesce in coordination across many kinds of temporal rhythms. My experiment in form and my argument follow each other.

The book is based on fieldwork conducted during matsutake seasons between 2004 and 2011 in the United States, Japan, Canada, China, and Finland—as well as interviews with scientists, foresters, and matsutake traders there as well as in Denmark, Sweden, and Turkey. Perhaps my own matsutake trail is not yet over: matsutake in places as far afield as Morocco, Korea, and Bhutan beckon. My hope is that readers will experience some of this “mushroom fever” with me in the chapters to come.

Below the forest floor, fungal bodies extend themselves in nets and skeins, binding roots and mineral soils, long before producing mushrooms. All books emerge from similarly hidden collaborations. A list of
individuals is inadequate, and so I begin with the collaborative engagements that made this book possible. In contrast to most recent ethnography, the research on which this book is based was pursued in experiments in collaboration. Furthermore, the questions that seemed to me worth pursuing emerged from knots of intense discussion in which I have been only one among many participants.

This book emerged from the work of the Matsutake Worlds Research Group: Timothy Choy, Lieba Faier, Elaine Gan, Michael Hathaway, Miyako Inoue, Shiho Satsuka, and myself. In much of the history of anthropology, ethnography has been a solo performance; our group convened to explore a new anthropology of always-in-process collaboration. The point of ethnography is to learn how to think about a situation together with one’s informants; research categories develop
with
the research, not before it. How can one use this method when working with other researchers—each learning from different local knowledge? Rather than knowing the object in advance, as in big science, our group was determined to let our research goals emerge through collaboration. We took up this challenge by trying a variety of forms of research, analysis, and writing.

This book opens a Matsutake Worlds mini-series; Michael Hathaway and Shiho Satsuka will present the next volumes. Consider it an adventure story in which the plot unfolds from one book to the next. Our curiosity about matsutake worlds cannot be contained in one volume or expressed by one voice; stand by to find out what happens next. Furthermore, our books join other genres, including essays and articles.
2
Through the work of the team, plus filmmaker Sara Dosa, Elaine Gan and I designed a web space for stories of pickers, scientists, traders, and forest managers across several continents:
www.matsutakeworlds.org
. Elaine Gan’s art-and-science practice has inspired further collaborations.
3
Sara Dosa’s film
The Last Season
adds to these conversations.
4

Matsutake research takes one not only beyond disciplinary knowledge but also to places where varied languages, histories, ecologies, and cultural traditions shape worlds. Faier, Inoue, and Satsuka are scholars of Japan, and Choy and Hathaway of China. I was to be the group’s Southeast Asianist, working with pickers from Laos and Cambodia in the U.S. Pacific Northwest. It turned out, however, that I needed help. Collaboration with Hjorleifur Jonsson and the assistance of Lue Vang and David Pheng were essential to my research with Southeast Asians
in the United States.
5
Eric Jones, Kathryn Lynch, and Rebecca McLain of the Institute for Culture and Ecology got me started in the mushroom world and remained amazing colleagues. Meeting Beverly Brown was inspirational. Amy Peterson introduced me to the Japanese-American matsutake community and showed me the ropes. Sue Hilton looked at pines with me. In Yunnan, Luo Wen-hong became a team member. In Kyoto, Noboru Ishikawa was an extraordinary guide and colleague. In Finland, Eira-Maija Savonen arranged everything. Each trip made me aware of the importance of these collaborations.

There are many other kinds of collaborations that go into producing a book. This one draws particularly on two intellectual developments, both local and broad. I had the privilege of learning feminist science studies at the University of California, Santa Cruz, in part from teaching with Donna Haraway. Here I glimpsed how scholarship could cross between natural science and cultural studies not just through critique but also through world-building knowledge. Multispecies storytelling was one of our products. The feminist science studies community in Santa Cruz has continued to make my work possible. Through it, too, I met many later companions. Andrew Mathews kindly reintroduced me to forests. Heather Swanson helped me think through comparison, and Japan. Kirsten Rudestam talked to me about Oregon. I learned from conversations with Jeremy Campbell, Zachary Caple, Roseann Cohen, Rosa Ficek, Colin Hoag, Katy Overstreet, Bettina Stoetzer, and many more.

Meanwhile, the strength of critical feminist studies of capitalism in Santa Cruz and beyond inspired my interest in knowing capitalism beyond its heroic reifications. If I have continued to engage with Marxist categories, despite their sometimes-clunky relation to thick description, it is because of the insights of feminist colleagues, including Lisa Rofel and Sylvia Yanagisako. UC Santa Cruz’s Institute for Advanced Feminist Research stimulated my first attempts to describe global supply chains structurally, as translation machines, as did study groups at the University of Toronto (where I was invited by Tania Li) and at the University of Minnesota (where I was invited by Karen Ho). I feel privileged to have had a short moment of encouragement from Julie Graham before her death. The “economic diversity” perspective that she pioneered with Kathryn Gibson helped not just me but many scholars. On questions of power and difference, Santa Cruz conversations with James
Clifford, Rosa Ficek, Susan Harding, Gail Hershatter, Megan Moodie, Bregje van Eekelen, and many more were essential.

The Boy Who Paints Me by Sharlay
The Paid Companion by Amanda Quick
The Score by Howard Marks
Conflict of Interest (The McClouds of Mississippi) by Gina Wilkins
Icebreaker by Lian Tanner
Hunter by Diana Palmer
ChangingPaths by Marilu Mann
1633880583 (F) by Chris Willrich
Michael R Collings by The Slab- A Novel of Horror (retail) (epub)
Rip Tide (A Ripple Effect Cozy Mystery, Book 2) by Jeanne Glidewell