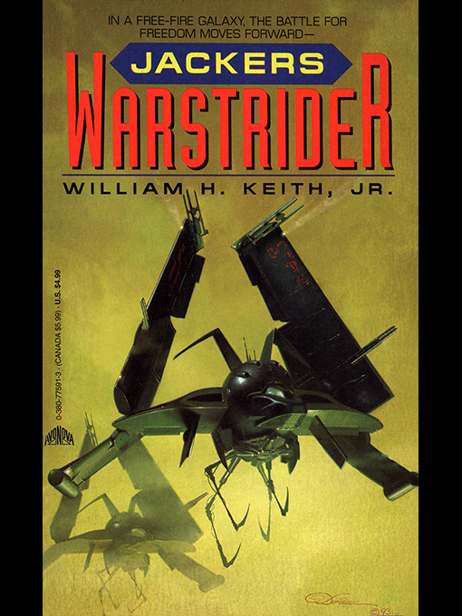 WARSTRIDER: JACKERS is an original publication of Avon Books. This work has never before appeared in book form. This work is a novel. Any similarity to actual persons or events is purely coincidental.

1350 Avenue of the Americas

Published by arrangement with the author

All rights reserved, which includes the right to reproduce this book or portions thereof in any form whatsoever except as provided by the U.S. Copyright Law. For information address The Ethan Ellenberg Literary Agency, 548 Broadway, #5-E, New York, New York 10012.

It was the celebration of the new year, the first day of the month of
Sho-gatsu,
and the celebrations were in full swing throughout the vast, slow-turning wheel that was Tenno Kyuden, the Palace of Heaven. His Divine Majesty, the Emperor of Man, had left the parties and ceremonials early, however, retiring to his private quarters. Now, he floated alone in space, the stars of the
Shichiju
scattered about him, colored motes in emptiness. That vista of suns adrift against the fog-glowing band of the Milky Way was illusion, of course, a ViReality given form and texture by the AIs that governed the palace, but the Emperor found it a useful one, a way of putting into perspective his own relative unimportance against the sweep and glory of the galactic backdrop.

There were many among his subjects who thought of the Emperor as a god… though Shiginori Konoye the man was all too aware of his own frailty. In the eighty-fifth year of his reign, which he had called
Fushi,
an era-name meaning Immortality, he was 181 Terran Standard years old. With medical nangineering and the antisenescence meteffectors coursing through his veins, cleaning, rebuilding, and repairing, there was theoretically no limit to the years of additional life he could expect. Expecting, however, was one thing.
Wanting
was something else.

With most of his life passing here within the Imperial Court at Tenno Kyuden, the synchorbital Palace of Heaven perched atop the Singapore Sky-el, Shiginori had been raised from childhood in the understanding that government was Imperial Nihon’s duty and burden in the great tapestry of the cosmos.

When the West had abandoned space travel five centuries earlier, a Nihon barely recovered from the ravages of war had stepped in, picked up the standard of Man’s ascent to space, and carried it on. Within fifty years, the economic strength rising from orbital factories and Lunar mines, not to mention the strategic advantages bestowed by orbital battle stations and laser platforms, had made Nihon the dominant power on the planet, a superpower easily able to assert control over Earth’s impoverished, warring nations.

The result had been the Terran Hegemony, fifty-seven nations joined together within the benevolent embrace of the
Teikokuno Heiwa,
the Imperial Peace. And when the K-T drive opened the worlds of other stars to terraforming and exploitation, the colonies of dozens of those nation-states had of course been added to the Hegemony. The Shichiju—the name meant “the Seventy” and was a little out of date for that reason—now embraced seventy-eight inhabited worlds in seventy-two star systems, these motes drifting now just beyond the silken hem of Shiginori’s
haori.

If the rule of Nihon over the Hegemony seemed only right and natural to Shiginori, so, too, did the Hegemony’s acceptance of that rule. It was for that reason that the Emperor of Man had been so surprised at the sharp and sudden flame of rebellion.

It was beyond understanding, really. Rising tensions, the appearance of agitators and rioting mobs on worlds as far removed as New America and Rainbow, had preceded the creation of something called the Network, a rebel underground dedicated, it seemed, to tearing the Hegemony asunder. The latest reports suggested that at least five worlds of the Shichiju, and possibly many more, were about to join together in a confederacy, with Network organizers forming the new government. At the same time, riots and protests had exploded at last into open conflict; the first battle of civil war had already been fought, at a world called Eridu some twenty-five light-years from Earth.

Nairan
—civil war. The very concept was unthinkable in a regime that had ruled in peace for centuries.

The problem, the Emperor thought, lay in the differences between the
Nihonjin,
the Japanese people, and the
gaijin,
the foreigners they governed. Raised with the twin concepts of
Kodo,
the Imperial Way, and
on,
their moral obligation to emperor and parents, the Japanese possessed an inner discipline that foreigners did not.

The stars, the blackness of space itself, dissolved around the Emperor. Startled, he looked around. He’d issued no mental command, and yet the virtual reality projected within his mind had changed. Trees, grass, cobblestone paths, and familiar buildings materialized around him, and he felt again the tug of gravity. He recognized this place, though he’d walked its gardens only a few times, during rare trips back to Earth. This was the shrine of Tsurugaoka at Kamakura, a holy place dedicated to Hachiman, God of War.

Concentrating, he issued orders through his cephlink, attempting to end the simulation, to break linkage, but nothing happened. Taking an unsteady step backward, he felt the rough bark of a gnarled and ancient ginkgo tree press against his spine. The scent of cherry blossoms filled his nostrils.

“What is the meaning of this?” he called.
Someone
must be monitoring this ViRscene, must be listening to his words. Who?

He thought he already knew
why.…

“Tenno-heika”
a voice said beside him. “Your Imperial Majesty.…”

Turning to his left he saw
Gensui
Tadashi Ikeda standing a few meters away in his spotless, Imperial Navy dress whites. The Fleet Admiral bowed deeply, and when he raised his eyes again, his gaze went no higher than the Emperor’s throat.

“Ah,
Ikedasan”
the Emperor said slowly. “I would be interested in knowing how you managed to override my personal AI.”

“Such things can be accomplished, Your Majesty, when there is great need. As now.”

Again, the Emperor tried to disconnect. This scene was
not
real. It was ViRdrama, a dream played out inside his brain by the software of a sophisticated artificial intelligence. His body lay safe in the Palace of Heaven, secure within its duralloy crypt. All he had to do was
wake up.…

But he could not. “What is it you want?”

“I am sure you can guess, Your Majesty. I am most sorry.”

“So. Is the condemned man to know the reason for his execution? For his assassination?”

Again, Ikeda bowed. “That is why I am here, Your Majesty.”

“Munimori sent you, I suppose.”

“Gensui
Munimori and I drew lots. This honor fell to me, though I am unworthy.”

“Indeed.” The Emperor waited, expressionless, forcing his assassin to volunteer the information rather than losing face by asking. His expression was that of
shiran kao,
the nonchalant face, revealing nothing.

“I speak for the
Kansei no Otoko”
Ikeda said. “The Men of Completion. They feel that your policies of admitting
gaijin
to the Imperial Navy, to the Imperial Council itself, have done terrible harm to the Empire and are in part responsible for our defeat at Eridu. Worse, you do not comport yourself as… as a god should.”

The accusation forced a smile from the Emperor, despite his
shiran kao.
The Japanese idea of a “god” was vastly different from that of most Westerners; most Japanese still thought of their parents as “gods” and revered the emperor as a similar god, one slightly higher in the celestial hierarchy.

But a few, the Men of Completion among them, took the idea that the emperor was descended from the Sun Goddess Ameratsu far more seriously.

Did that seriousness actually extend to the murder of the god they claimed to revere?

He took a breath to reply… and found his breathing blocked, as though an invisible, silken cord had tightened around his throat.
“Tawakeru na,”
he managed to say. “Stop playing the fool!” The cord tightened, the pressure building though it did not bite into his skin. Pain was growing in his chest as well, a burning, crushing pain that arced down his left arm.

Pain!
Normally, purely physical sensations could not cross the ViReality barrier. That his link was passing them through now was a kind of emergency warning, an indication that his body was in serious danger. He tried to raise his hands, but they dangled useless at his sides. Again he accessed his cephlink, calling for help.

“Your cephlink has been isolated, Your Majesty. I control the AI now, and I have directed it to shut down your breathing and your heart. You will not suffer for long, I promise.” Ikeda paused, his image licking its lips. “They will find your body in the palace,” he continued. “You will have committed
seppuku.
Your death poem will apologize for your causing civil war and disorder in your realm.”

“Your nephew and heir, your Majesty. Ichiro Takeda.”

“I very much regret to tell you that Prince Okada, your son and first heir, will also be found dead, by his own hand. Possibly because of grief at the news of your death.”

Iye…
Denial flooded the Emperor’s mind, a pain worse than the agony in his chest.
No… no…
Takeda was an empty-headed idiot, a pawn in the hands of Munimori and the other plotters. Evidently, that was what the Men of Completion were counting on.

Then the Tsurugaoka shrine dissolved into darkness, and the Emperor of Man floated once more, adrift in the endless, peaceful night.

To Western sensibilities, the tea ceremony is alien, flat, and lifeless. To Nihonjin, however, each motion, each aspect is charged with subtle meaning, providing aesthetic stimulation, refreshment, and the well-being and security of time-honored ritual. Here, surely, is the soul of Zen, understatement speaking directly to the mind.

—
Japan: From the Past to Tomorrow