Jaine Austen 4 - Shoes to Die For 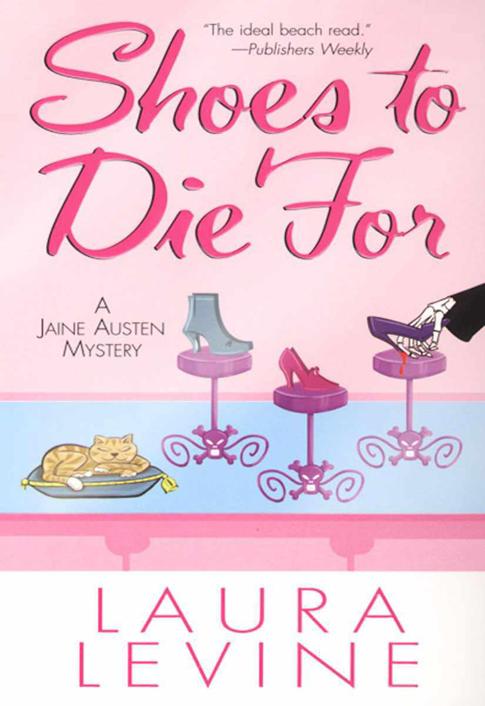 SHOES TO DIE FOR

“Laura Levine’s acerbic comedy-writing skills give a cutting edge to her series.”

“You will love it…Levine is a funny lady.”

“Levine’s series gets smarter with each book. Her dialogue is realistic yet hilarious, and her vivid characters jump off the page.”

“The identity of the real killer comes as a smart surprise.”

“
Last Writes
is sprightly and entertaining. I commend it to the attention of anyone wishing to be entertained.”

“Hilarious and an absolute delight. I highly recommend this book if you want to laugh and enjoy a good read.”

—
I Love a Mystery

THIS PEN FOR HIRE

“Jaine has a sassy attitude and I look forward to her new adventures.”

“A fluffy, fun and fast read.”

“Laura Levine’s hilarious debut mystery,
This Pen for Hire
, is a laugh a page (or two or three) as well as a crafty puzzle. Sleuth Jaine Austen’s amused take on life, love, sex and LA will delight readers. Sheer fun!”

“
This Pen for Hire
is as much about Jaine herself as about the mystery. Fans of Janet Evanovich’s Stephanie Plum series will want to check her out.”

THIS PEN FOR HIRE

SHOES TO DIE FOR

Shoes to Die For

For Gracie,
and all the other treasured ladies
in my life.

Thanks to my editor extraordinaire, John Scognamiglio, for coming up with such a nifty title and murder weapon. To my agent Evan Marshall, for always being there when I need him. To Joanne Fluke, author of the delicious Hannah Swensen mysteries, for her many acts of kindness and generosity. To Carlos Marrero, for yet another eye-catching cover. To my wonderful husband Mark, for putting up with me all year. And finally, thanks to my cat, Mr. Guy, because he refuses to get off my computer until I thank him.

I am definitely one of the eat-lunchers, as anyone can tell from the impressive collection of fast food wrappers in my garbage can.

But on the day my story begins, I had broken ranks with my fellow slobs and was heading across town to do lunch with my neighbor Lance. It was warm and hazy, and as I drove east toward La Brea Avenue I could almost make out the Hollywood sign behind a curtain of smog.

La Brea Avenue is a hotbed of hipness in midtown Los Angeles. A onetime industrial street, it’s now dotted with boutiques and restaurants so cool they don’t bother with signs out front. And it was to one of those restaurants, a place called Café Ennui, that I was headed. Only I was having a hell of a time finding it.

I’d driven up and down the stretch between Wilshire and Melrose at least three times and was about to give up when I saw a funky restaurant with a fifties diner table in the window. This must be it, I thought, as I parked my Corolla a few doors down. By now I was a good fifteen minutes late. I dashed into the restaurant, only to find that Lance wasn’t there. I figured he was tied up with a demanding customer. Lance is a salesman at Neiman Marcus, in the designer shoe department. Or as Lance likes to say, “I work in high heels.”

I took a seat at the table in the window and glanced around the restaurant. The place was an eclectic mix of funky tables and chairs. I was surprised to see I was the only customer.

A skinny guy with a shaved head stood behind a counter and shot me an icy stare. Not exactly service with a smile. I waved him over. Reluctantly, he got off his stool and started across the room.

“Hi,” I chirped, trying my best to ignore his look of disdain. “Do you think I could see a menu?”

“Sweetie,” he snipped, “this isn’t a restaurant.”

I looked around and for the first time noticed price tags dangling from the tables and chairs.

“Nooo, it’s not,” he said slowly, as if talking to a three-year-old.

“Then I guess you won’t be getting a tip,” I said, with a feeble smile.

He was not amused.

“Café Ennui is over there.”

He pointed a bony finger across the street to a store-front with blackened windows. No wonder I’d missed it. The place looked like it had gone out of business decades ago.

I slid out of my chair and, under the withering glare of my petulant furniture salesman, dashed across the street.

As it turns out, Café Ennui was anything but abandoned. Behind the blackened windows sat a gaggle of people who looked like they’d just stepped out of a Banana Republic ad, sipping mineral water and nibbling on various forms of lettuce. The average waist-line hovered somewhere in the low twenties.

I looked around and spotted Lance. It was hard to miss him, with his headful of tight blond curls and lime green T-shirt. I hustled over to where he sat at a tiny table for two.

“Sorry I’m late,” I said, plopping down into an uncomfortable metal chair, “but I couldn’t find the place. Do you realize the sign out front is the size of a postage stamp?”

“I know. They try to keep it exclusive. Even their phone number is unlisted.”

Welcome to La La Land, where colonic irrigation parlors take out full-page ads in the Yellow Pages, but restaurants are unlisted.

Lance shot me a disapproving look.

“Jaine, honey. Do you realize you’re the only person in the restaurant wearing elastic-waist pants?”

He was right, of course. The place was filled with perfect bodies in low-rider jeans and tank tops, slender midriffs exposed. And those were just the guys.

“So what?” I said, reaching for the menu. “Am I going to be arrested by the pants police?”

He shook his head and sighed.

I sighed, too, when I checked out the menu. What a disaster. All I saw was arugula and radicchio and baby vegetables. Not a calorie in sight. The most interesting thing on the menu was an old coffee stain.

Just when I was wondering if I could possibly convince Lance to ditch this place for a restaurant that served actual food, a sultry waitress with huge eyes and tiny boobs slithered up to us.

“What can I get you today?” she asked, with a brittle smile.

“How about something from McDonald’s?”

No, I didn’t really say that. What I said was: “Got any burgers?”

“We’ve got the ahi tuna burger with carmelized fennel.”

There was no way out of it. I’d have to order a salad.

“I’ll have the turkey cobb.”

“Surprise me,” I said, throwing caution to the wind.

Ms. Sultry, who looked like her last lunch had been a line of cocaine, took Lance’s order and slinked away.

“Really, Jaine,” Lance said, eyeing my
Dukakis for President
T-shirt. “You’re so hopelessly out of date. Don’t you want to be hip?”

“Oh, c’mon. You’re not nearly the chubbette you think you are.”

“In a town where a six is considered a plus size, I’m a chubbette.”

“You happen to be a very attractive woman. All you need is a little fashion advice.” Then, as if he’d just thought of it, he said, “Hey, that’s not a bad idea. How about I give you a fashion makeover?”

And then it dawned on me. I knew what this was all about.

“You’re looking for a project, aren’t you? You’re bored and lonely and between boyfriends, and you want something to do.”

But of course it was true. Ever since Lance discovered his last boyfriend was a married man, he’d been sulking around his apartment like a teenager with a rusted nipple ring.

I shot him a wilting look.

“Okay, so maybe it is true,” he confessed. “Maybe I am looking for a project. But that doesn’t change the fact that you’re in desperate need of a makeover.”

The Book of Fate by Parinoush Saniee
Coffin Collector by William Massa
Blaze of Winter: A Loveswept Contemporary Romance by Elisabeth Barrett
UndertheInfluence by Ava Adele
This Case Is Gonna Kill Me by Phillipa Bornikova
Travesties by Tom Stoppard
Undying by Woodham, Kenneth
Something Like Thunder by Jay Bell
Brother Against Brother by Franklin W. Dixon
Dead Money by Banks, Ray