Jane Austen Mysteries 10 Jane and the Madness of Lord Byron 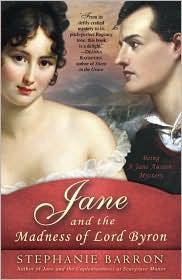 PRAISE FOR STEPHANIE BARRON'S
BEING A JANE AUSTEN MYSTERY SERIES

Jane and the Barque of Frailty

"Barron does an admirable job not only with the [Jane Austen] mysteries, but also in mimicking Austen's style."

"Satisfying right to the last revelation ... Like Regency great Georgette Heyer, the author excels at both period detail and modern verve. Aping Austen's cool, precise and very famous voice is a hard trick to pull off, but Barron manages it with aplomb."

"Charming, literate and unequaled in its dissection of Regency-era social injustices."

Jane and His Lordship's Legacy

"Considered by some as the best of the 'neo-Austens,' Barron gets high marks for authenticity and wit."

Jane and the Ghosts of Netley

"The latest installment in Stephanie Barron's charming series ... [is] a first-rate historical mystery. Barron writes a lively adventure that puts warm flesh on historical bones. The nice thing is she does so in a literary style that would not put Jane Austen's nose out of joint."

"With elements of an espionage thriller and a Regency romance, [this] is a book Barron fans have been awaiting. The suspense is superb.... Barron brings historical mysteries to a new level."

"A wonderfully intricate plot full of espionage and intrigue ... The Austen voice, both humorous and fanciful, with shades of
Northanger Abbey
, rings true as always. Once again Barron shows why she leads the pack of neo-Jane Austens."

Jane and the Prisoner of Wool House

"There's plenty to enjoy in the crime-solving side of Jane.... [She] is as worthy a detective as Columbo."

"A carefully written, thoroughly researched novel ... An enjoyable, authentic portrayal of this classic author, a strong setting and a thoroughly enjoyable plot will convert new readers to the series as well as satisfy longtime fans."

"The mores and manners of Jane Austen's 19th-century world are brought skillfully to life in
Jane and the Prisoner of Wool House
. A skillfully told tale with a surprise ending."

Jane and the Stillroom Maid

"Barron does a wonderful job of evoking the great British estates and the woes of spinsters living in that era ... often echoing the rhythms of the Austen novels with uncanny ease."

"This work bears all the wonderful trademarks of the earlier titles, including period detail, measured but often sardonic wit, and authenticity."

Jane and the Genius of the Place

"This is perhaps the best 'Jane' yet. The plot moves smoothly and quickly to its denouement. Barron's mysteries also educate the reader, in a painless fashion, about the political, social and cultural concerns of Austen's time. Jane [is] a subtle but determined sleuth."

"Barron tells the tale in Jane's leisurely voice, skillfully re-creating the tone and temper of the time without a hint of an anachronism."

Jane and the Unpleasantness at Scargrave Manor

Jane and the Man of the Cloth

Jane and the Wandering Eye

Jane and the Genius of the Place

Jane and the Stillroom Maid

Jane and the Prisoner of Wool House

Jane and the Ghosts of Netley

Jane and His Lordship's Legacy

Jane and the Barque of Frailty

Jane and the Madness of Lord Byron 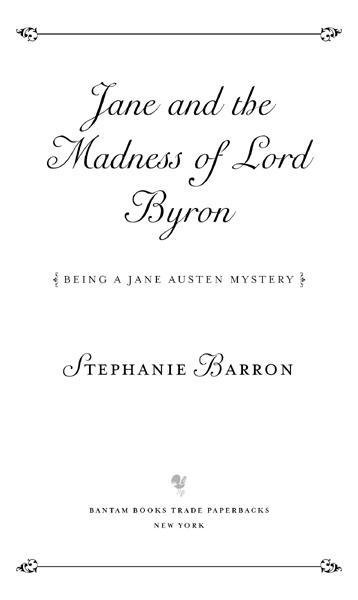 Jane and the Madness of Lord Byron
is a work of fiction. Names, characters, places, and incidents either are the product of the author's imagination or are used fictitiously. Any resemblance to actual persons, living or dead, events, or locales is entirely coincidental.

Pictures of perfection as you know
make me sick & wicked.

Chapter One - Summons from London

Chapter Two - An Interval for Reflection

Chapter Three - An Incident on the Road

Chapter Four - Pleasures of a Prince

Chapter Five - A Patron of Donaldson's

Chapter Six - Encounter at the Camp

Chapter Nine - A Remedy for Drowning

Chapter Fourteen - A Call to Justice

Chapter Fifteen - Evidence of an Undergroom

Chapter Nineteen - Incident on the Downs

Chapter Twenty-Three - Where the Tunnel Led

Chapter Twenty-Seven - A Matter of Questions

A Few Questions for Stephanie Barron