Read Jesus Lied - He Was Only Human: Debunking the New Testament Online

Jesus Lied - He Was Only Human: Debunking the New Testament 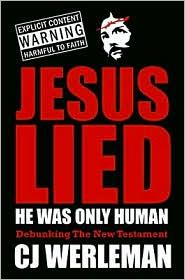 JESUS LIED - HE WAS ONLY HUMAN

This book is available in print at Amazon.com &
Amazon.co.uk

All rights reserved. No part of this publication may be reproduced, stored in or introduced into a retrieval system, or transmitted, in any form, or by any means (electronic, mechanical, photocopying, recording or otherwise) without the prior written permission of the publisher.

This book is sold subject to the condition that it shall not, by way of trade or otherwise, be lent, resold, hired out, or otherwise circulated without the publishers prior consent in any form of binding or cover other than that in which it is published and without a similar condition including this condition being imposed on the subsequent purchaser.

“
Thou shalt not bear false witness”

Shortly following the release of my first book, ‘God Hates You. Hate Him Back’, I received a number of emails from Christians. While not all received were of the “burn in Hell you scum of Satan” kind, many were. Here is just one example:

“CJ, why write the biography of a God you don’t believe in? Why tell people to hate something that you believe is non-existent? Isn’t this just as meaningful as ‘Leprechauns Hate You. Hate Leprechauns Back’? You don’t see Christians writing about non-belief!”

My reply to that kind of statement is that first of all, I am utterly enthralled by religion, all religion! I am constantly surprised, shocked and perplexed that anyone can feel indifference to the most important philosophical questions of all time, the questions that religion purport to answer: “What is the meaning of the human existence”; and “how did we get here?”

These are questions that, I believe, are responsible for religious belief and are ultimately the questions that drive the modern fields of science to ever-greater heights and depths.

My overall objective, as an anti-theist, is to demonstrate that your average Sunday churchgoer has a complete misunderstanding of the particular God they believe in. In their minds, their God is a god of mercy, love, and compassion. A characterization that is ultimately due to Bible illiteracy, charismatic preachers and historical ignorance.

My aim, therefore, in writing ‘God Hates You. Hate Him Back’ was to bring the Bible back to the people, so to speak, to remind them of who God really is. God, as depicted in His own Bible, is a vindictive, capricious, baby killing, genocidal, merciless, ethnic-cleansing, alpha-male, misogynistic sky-bully. I believe, based on reader and critic reviews, I achieved that aim – that indeed the God of Abraham, if in the unlikely event he were more than imaginary, is a complete and utter asshole, and certainly a deity worthy of our disdain rather than praise.

Furthermore, I am convinced more than ever that Isaac Asimov, Russian born American author, blew bible-based superstition away with a metaphorical 12-gauge, when he wrote:

“
Properly read, the bible is the most potent force for atheism ever conceived.”

In an idealistic sense, my goal in writing my first book, was to increase public cognition of God’s depraved behavior and malevolent attitudes, at least by our 21
st
century standards. Ultimately, I wanted to play a small part in providing North America with another nudge on its continued trend in moving away from belief in the God of Abraham, just as the rest of the western developed world appears to be doing.

It is my dream that America, within the next half-century, will look increasingly like the nations of Scandinavia. It is in these nations that belief in any kind of God is confined to less than 30% of their respective populations, resulting in countries such as Sweden, Norway, and Denmark enjoying the fruits of living in societies ranked highest by the United Nations, at least in terms of societal health. (Societal health measured by such metrics as: crime rate; adult literacy; affordable housing; gender equality; teen pregnancy; and access to education).

There was a time when religion ruled our lives; we refer to that period of time as the Dark Ages.

It preceded the Period of Enlightenment, which marked the beginning of the end for religion’s relevancy in governing its people. In more modern times, we have seen what the theist worldview looks like, a world where the laws of God are enacted. It looks like Taliban ruled Afghanistan, Saudi Arabia, and Banda Aceh, Indonesia.

Monotheistic religions, the ones written by men (yes, men only) who believed the shovel to be emergent technology, dresses itself up as a magic potion for today and tomorrow’s problems. It does this by holding a venerated rear view mirror to ancient times and the moral judgments of bronze aged men. The sixty-six books of the Bible, and the confusing contradictory rambles of the Koran, are less of a guide to modern man for spiritual or moral direction than any number of quasi pop-psycho-babble titles found on our bookshelves today. This includes such entrepreneurial self-styled B.S. gurus as Deepak Chopra, Anthony Robbins, or Dinesh D’Souza. These gentlemen are slick in their ability to sprinkle scientific and psychological vernacular to confuse you into believing their revelations to be profound. In other words, people still buy bullshit… and a lot of it!

Sam Harris places ancient sky-god religion in context of its relevancy to the modern world so eloquently in his book End of Faith:

“
What if all our knowledge about the world were suddenly to disappear? Imagine that six billion of us wake up tomorrow morning in a state of utter ignorance and confusion. Our books and computers are still here, but we can’t make heads or tails of their contents. We have even forgotten how to drive our cars and brush our teeth. What knowledge would we want to reclaim first? Well, there’s that business about getting food and building shelter that we would to get reacquainted with. We would want to relearn how to use and repair many of our machines. Learning to understand spoken and written language would also be a top priority, given that these skills are necessary for acquiring most others. When in this process of reclaiming our humanity will it be important to know that Jesus was born of a virgin? Or that he was resurrected? And how would we relearn these truths, if they are indeed true? By reading the Bible? Our tour of the shelves will deliver similar pearls from antiquity – like the ‘fact’ that Isis, the goddess of fertility, sports an impressive pair of cow horns. Reading further, we will learn that Thor carries a hammer and that Marduk’s sacred animals are horses, dogs and a dragon with a forked tongue…and when we will want to relearn that premarital sex is a sin? Or that adulteresses should be stoned to death?”

Harris further contends that if the above ‘all-humanity memory loss’ were to occur, then our relearning of all things of relevance would place the Bible and Koran on the shelf next to Ovid’s ‘Metamorphoses’ and the ‘Egyptian Book of the Dead’ and Dr Seuss’ ‘Green Eggs and Ham’.

This now brings me to my objective in writing this book, ‘Jesus Lied. He Was Only Human’. As mentioned above, my primary focus of my first book was to remind the world that the God of the Bible
is
a villainous old sod. While I gave a summary of all sixty-six chapters of the Old and New Testament, word space and theme prevented me from taking an in depth analysis of the proclaimed “Son of the Creator”, Jesus “bring my enemies before me and slaughter them” Christ (Luke 19:27).

I’ve written this book as analysis of the New Testament, including an examination of the origins for Christianity; how the Christian Bible came into being; who wrote it; the contradictions and irreconcilable discrepancies of the Gospels; and Paul’s domineering influence in shaping the Christian.

By the time you’re done reading this book you will know of the arbitrary decisions made by theologically motivated old men in hand picking the “writings of Jesus”. It was these old men who chose to include or omit such details as; the respective identities of the Gospels; that Jesus caused great suffering to his followers; how the Gospels, being the four biographers of Jesus, cannot corroborate a single event of Jesus birth, baptism, ministry, arrest, trial, crucifixion, or resurrection; and how Paul started a religion that Jesus, as a fundamentalist Jew of his time, would never had approved of. Thread by thread, we will destroy the fabric that is the myth of Jesus Christ, Superstar. This will leave you with three ultimate conclusions, that:

It’s important to recognize that nothing contained in this book is a revelation. Everything I cover in this book originates either directly from the Bible, or are facts as acknowledged by consensus among scholarly theologians today. What they are not, however, are facts known to Mr. and Mrs. Evangelical Happy-Clapper or your average card carrying Christian in the pews. However, it is my belief that Christianity will continue its downward trend in the United States. Especially as this information, once only known to the intellectual few and the theological protectors of the Church (i.e. the ones smart enough to read the bible they were told to believe in), becomes common knowledge for all.

Christianity remains the largest faith group in the world today, that is if you count Catholics, Protestants, Eastern Orthodox, evangelicals, Mormons, Jehovah’s Witnesses, and all denominations remotely connected with Christianity. Yet these groups don’t always agree. In fact, some of them strongly disagree with each other that violent confrontation often results -- begging the question: What is Christianity?

Let’s go through a quick definition.

The word “Christianity” of course derives from the word “Christ,” which literally means “Anointed One.” Christians universally believe that the AD 1
st
century figure named Jesus of Nazareth was the “Anointed One.” (Do not confuse this as the Messiah that starry-eyed twenty-something’s proclaimed as Barak Obama) While this definition seems simple enough to us on the outside looking in, it is far from not, judging by the 38,000+ denominations of this religion which persist to this day. The reason for this massive number of dissonance in the teaching of the doctrines is easy to pinpoint; Christianity is complex because the early Christians couldn’t agree on any of the central tenets of the story… and still don’t 2000 years later. Not helping this is the infinite contradictions and the crude carpentry of tacking together the respective books of the New Testament.

“Christianity makes no sense: 38,000 denominations can’t be wrong,” would make an excellent bumper sticker! But rest assured Christians have a rebuttal for this philosophical phenomenon. The following is a typical explanation, this taken from a brochure distributed by North Point Ministries, USA:

“
So, why are there so many different denominations and types of churches? There are several reasons. For starters, let’s not forget that denominations are made up of churches and churches are made of people; and sometimes people just don’t get along. After all, just because people are Christians doesn’t mean they always agree. Moreover, Christians still struggle with pride, selfishness, and stubbornness, and this means they sometimes respond to relational conflict poorly.

This is the tired and overused, “Jesus was perfect, man is fallible”, excuse. But the apology completely misses the target, as the fallibility is contained within the text, the New Testament. Christianity manufactures these divisions because of the irreconcilable discrepancies, illogical assertions, false promises, historical and geographical errors, contradictions, and corrupted texts that constitute the canonized books of this religion. Put simply, Christianity is an argument from errors and ignorance.