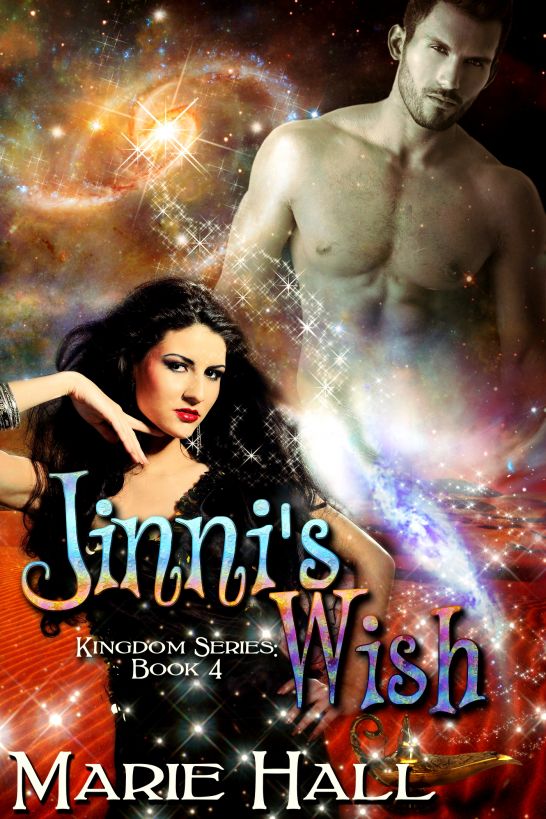 A long, long time ago there lived a man. A
Jinni, who had one wish. To know love. But the woman he thought he
knew betrayed him and the love he thought they shared. Tortured for
his crimes, he was cast out of Kingdom, stripped of all his powers,
left to langour in pain and solitude, until eventually he becomes
nothing but a ghost...

Paz Lopez is an artist with a dream. To buy a
ridiculously large penthouse in the swankiest section of Chicago.
But there's just one hitch, she has no man to share her dream with.
A fateful visit to a carnival and Madam Pandora's tent sends Paz on
a mission to find the love of her life before it's too late.

But the Madam forgot to tell Paz one very
important detail... to meet him, Paz will have to die first.

This is a work of fiction. Names, characters,
places, brands, media, and incidents are either the product of the
author's imagination or are used fictitiously. The author
acknowledges the trademarked status and trademark owners of various
products referenced in this work of fiction, which have been used
without permission. The publication/use of these trademarks is not
authorized, associated with, or sponsored by the trademark
owners.

This ebook is licensed for your personal
enjoyment only. This ebook may not be re-sold or given away to
other people. If you would like to share this book with another
person, please purchase an additional copy for each person you
share it with. If you are reading this book and did not purchase
it, or it was not purchased for your use only, then you should
return to Smashwords.com and purchase your own copy. Thank you for
respecting the author's work.

The author and illustrator have asserted
their respective rights under the Copyright Designs and Patent Acts
1988 (as amended) to be identified as the author of this book and
illustrator of the artwork.

To my girls, you know who you are. I
seriously could never get these things done without you constantly
forcing me to sit down and write instead of playing another round
of solitaire. Ya’ll are awesome and I heart you!

This is to all the fans who write me and tell
me how much they just love my books. Writing is such a solitary
profession, to get a note is super rewarding. To my fans in Latvia
(which is so freaking awesome, seriously), to my fans who bake the
Mad Hatter cupcakes now because they sounded so yummy, to those who
had to buy each book in a row because they were so hooked… I do
this for you guys. Thanks!

“What kind of name is that?” Paz Lopez hopped
on one bare foot, while simultaneously gripping the cell phone with
her chin as she attempted to slip on her blood red pump. She very
nearly broke her neck in the process when she stumbled over the
corner of her cream shag rug. “Dang it,” she hissed.

She could already picture Richard rolling his
eyes on the other end of the line. “Diabolique.”

This time, she was the one to roll her eyes.
Plopping down on the edge of her unmade bed, she did what her
father used to always say:
work smarter, not harder
. So much
easier to put shoes on when sitting, instead of hopping around like
a broken jack in the box.

“I heard you the first time. But that doesn’t
sound like any kind of carnival I’d want to visit. Sounds
creepy.”

“Aww, come on, chicken. Todd and I are going
and it’s sorta lame that all you ever want to do on a Friday night
is vegg in front of that dinosaur you call a TV and down two point
two glasses of vino.”

Paz loved her brother, she really did. But
ugh… she rubbed her nose, stomach churning with nerves and
irritation. Now was
so
not the time to be talking about
carnivals, or whatever the hell this Diabolique place was. She had
an art show in an hour, today was her make it or break it day. It’d
taken months for the hottest gallery in town:
Moderne
, to
agree to even potentially host an exhibit for her.

Of course they hadn’t. She was too new. But
she had a friend, who knew a friend, who knew a guy who had an
exhibit scheduled and was in need of ten more paintings to fill the
space. Fast forward several boxes of tissues, lots of chocolate,
and probably two (okay three) bottles of champagne later, Paz was
here. Ready to break out. To become a name. Finally.

If only her stupid nerves would settle down
and stop making her feel like she was totally going to puke all
over her pearl gray goose down comforter. Pinching her nose, she
counted slowly to ten. She only got to three before Richard
starting acting obnoxious as usual.

“I know you’re there. I hear you breathing.”
He proceeded to pantomime harsh deep breaths. “Answer me, or I will
stalk you. I know where you
liiiiveee
.”

Giggling, she yanked her purple head pillow
off the bed and shoved it against her stomach. Maybe pressure would
ease the knee-knocking nerves. “You’re really annoying.”

He snorted. “Yeah, well Todd loves it. So
tell me you’re coming.”

Paz shoved about a week’s worth of bras
underneath her bed and lifted the teal shirt off the lampshade
she’d tossed carelessly aside last night. Jeez, she was really a
slob. Maybe when she got filthy stinking rich she could afford a
maid.

“Are you coming to my show?” She plucked at
her bejeweled skirt. Her first and only attempt at making clothes.
Skirts were supposedly so easy to make.

She’d had to undo the stitching four times
before she felt certain she wouldn’t zip it up and have a wardrobe
malfunction. Namely having the stupid thing fall down around her
ankles when she stepped off her elevator into the lobby of her
swank Chicago digs.

Though swank was sorta stretching it. She
wasn’t sure the five hundred square foot broom closet she currently
called home could ever be considered swank, but she had a great
address in the hippest part of town and with any luck, she’d be
moving to that penthouse suite after tonight.

“We wouldn’t miss it.” His voice was warm,
reassuring, and Paz couldn’t help but smile. She loved her brother.
“But Todd told me to ask you now, because we both know how you get
when you’re talking about your art.”

“No I don’t.” She tossed the pillow away,
fiddling with the large cream flower on her black cable knit
sweater.

“Pfft. I didn’t even have to tell you how you
act and you’re already defending it. So answer, sis. I’m not
getting any younger.”

“Fine.” She stood, grabbing her purse and
wallet off her green distressed thrift store nightstand. “I’ll go
butt face. But I won’t promise to like it, so there.”

“You don’t have to like it, but you do have
to visit Madam Pandora’s tent with me. Bye!”

“What?” Her brows dipped, but all she heard
was the buzz of an empty line.

Rolling her eyes, she patted her flat blunt
bangs and took a deep breath, ready to face her future. Her stomach
nosedived. Well, unless she had to puke first.

The Chicago fairgrounds were magical at
night. Neon lights lit up the park like a firework’s display.
Crowds clamored from one red and white pinstriped tent to the next.
The buttery scent of popcorn wafted in the air, tickling her
nose.

Todd’s expressive light brown eyes twinkled
merrily as he hugged her against his broad chest. A good foot
taller than her, with chestnut brown hair, and tanned good looks.
Gorgeous and so her type, if it wasn’t for the fact that he was
totally off the market.

“On me then,” he said, voice light and
carefree. “A treat for my favorite artist…”

Todd clamped onto Richard’s hand and kissed
the knuckle. A look passing between them made Paz’s knees turn to
jelly. What would it feel like to have someone look at her that
way? Not that she was old, only twenty-seven, but still, old enough
to crave what she’d never known.

There’d been passion, maybe some toe-curling
moments with past boyfriends, but nothing that had ever stuck
beyond month six. Maybe she was cursed.

But she’d sold all ten of her paintings. She
smiled, biting her bottom lip… well on her way toward that maid
she’d always dreamed of. So maybe not that cursed.

“Okay, I’m so gonna barf if you guys keep
looking at each other like that.”

Todd smirked, patting her head like she was a
dog.

She gave him the evil eye. “Not a dog, Todd.
Go get me my popcorn,” she clapped her hands, “and make it a large.
With butter. Momma’s got a serious hankering from some greasy fat
tonight.”

Todd saluted and winked. “Anything for you,
baby?”

Richard shrugged. “Trying to watch my carbs.
Whatever you have I’ll share.” Then he sighed, a silly mopey
I’m-so-incredibly-happy kind of sound and again Paz couldn’t help
feeling like the third wheel.

“I love him,” Richard whispered, quietly,
like he wasn’t even really saying it to her.

She nodded, tucking his cowlick back. “I
know. Aren’t you sure you wouldn’t rather me, yanno, be home and
stuff tonight? I mean, this is your one year anniversary. Why in
the world would you want me here? Shouldn’t you be
bow-chica-wow…”

Richard tugged on the end of her thick black
hair.

“You’re disgusting. And no. He loves you as
much as I do. Besides, Madam Pandora’s awaits.”

A cool rush brushed against Paz’s legs. She
was wearing thick stockings, and had traded in the killer pumps for
a more ankle friendly pair of sparkling black flats, but she
probably should have grabbed a thicker jacket.

Even with the sweater underneath, she was
starting to shiver.

She grumped. “Why do you want me to go there
so bad? What is it anyway?”

Glancing around, Paz frowned. The carnival
was definitely as creepy as she’d expected it to be from the sound
of the name. Diabolique made her think of the devil. Coming from a
strict Catholic upbringing, anything to do with Mr. Red, Bad, and
Evil still made her skin get the creepy crawlies.

Not to mention the carnival was just strange
looking. Aside from the garish striped tents, and neon lights, the
rides were all black. Thick, dark black. Blending into shadow if
not for the lights affixed to the rides.

At first she’d had a mini heart attack when
they’d bought their tickets, thinking maybe this night wouldn’t
suck so hard after all. The man selling them behind the booth had
been hot. No scratch that, he was way hotter than hot. Which
sounded really lame, but how else could she describe the panty
melting smile of his straight white teeth. The artfully arranged
blond surfer hair, like liquid gold the way it’d gleamed beneath
the light. And his face, oh man… she couldn’t paint something so
pretty. High cheekbones and hard square jaw, dimples when he’d
grinned.