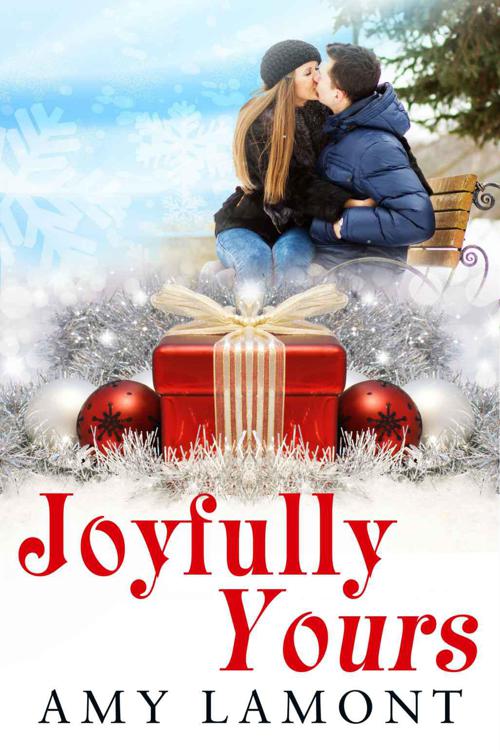 ALL RIGHTS RESERVED. This ebook is licensed for your personal enjoyment only
.
No part of this book may be reproduced or transmitted in any form or by any means, electronic or mechanical, including photocopying, recording, or by any information storage and retrieval system without express written permission from the author.

This is a work of fiction. Names, characters, places and incidents either are products of the author’s imagination or are used fictitiously. Any resemblance to actual events or locales or persons, living or dead, is entirely coincidental.

For Mike, Sarah, and Meredith, the best part of every day

Faith Leary had kicked off the holiday season the same way every year since she’d reached adulthood—standing in the express checkout line at Carlucci’s Market the day before Thanksgiving. 'Cause nothing said “Happy Holidays” better than a dented can of cranberry sauce.

Though this year was a little different. She’d made a major score. Only one of the two cans of cranberry sauce she held was dented. Her mother would have only half as much to complain about.

And speaking of things to complain about…she tapped out a sharp beat with her toe on the dingy linoleum floor. She stretched up onto her toes and leaned sideways in an attempt to see around the man in front of her. The customer at the register pulled out a wad of coupons and Faith bit back a groan. With a quick huff to blow the fringe of bangs out of her eyes, she shuffled both cans of cranberry sauce into one hand and dug into her over-sized bag with the other. She stirred through the debris living in the bottom of her purse until her fingers wrapped around her phone.

The line didn’t move an inch.

Faith checked the time. 2:10. She’d promised Mrs. Marshall she’d arrive no later than 2:30. If she didn’t make it, she’d have to wait until after the Thanksgiving weekend to get paid for walking Mrs. Marshall’s ancient Lhasa Apsos. She had a few bills to pay, and in another week her rent was due. Her negative bank balance meant she couldn’t afford to hold off on getting her paycheck.

That’s what you get for waiting until the day before Thanksgiving to buy cranberry sauce. Honestly, Faith.
She cringed and almost turned to see if her mother stood behind her in the grocery line. She stopped at the last minute.
That
voice was all in her head.

Stay in line and miss any chance of making rent on time this month or put down her only contribution to Thanksgiving dinner and risk her mother’s anger? Eviction was the worst that could happen if she paid her rent late. And that was a lengthy process. Her landlord worked with her in the past. Maybe he’d do it again.

There would be no working things out with her mother. For the rest of her life she’d hear about the Thanksgiving she’d completely ruined by waiting until the last minute to get cranberries. Sighing again, Faith dialed Mrs. Marshall and told her she wouldn’t make it.

Faith checked her phone again when she reached the head of the checkout line
.
2:20. Was it possible only fifteen minutes passed?

Faith once again plumbed the depths of her bag, this time in search of her wallet. Opening it, she found two crumpled dollar bills. Wasn’t there a five in there yesterday?

Oh, wait.
She gave it to the bartender when she bought a Coke at the place her band played last night. What remained in her wallet was the change he gave her. She offered the cashier a weak smile as she dived back into her bag. Surely she’d stuck a few singles in a pocket here or there.

Dragging her fingers across the crumb-coated bottom, they closed around some change. Snatching it up, she counted out seventy-two cents.

She squinted at the price glowing green on top of the cash register, mentally cursing any store for having a cash only line in this day and age. “How much is it again?”

Faith went in once more, this time coming up empty-handed. She pulled items out, piling her sunglasses, lip gloss, tissues, and a half-eaten Hershey bar on the conveyor belt. The toe of the man in line behind her started tapping and she ground her back teeth together.

Faith turned toward the end of the checkout lane.

A pair of sky blue eyes met hers, their color enhanced by the dark hair dipping over his forehead. He offered her a friendly grin and her lips curled in response. Her gaze drifted down, admiring his strong jaw and then roaming even lower…locking on the spot under his chin.

She blinked once, then again. The vision in front of her didn’t change. His black shirt and white tab collar were still there.

Holy crap.
How fast does a person get sent to hell for checking out a priest?

Faith turned back to the cashier and forced down all thoughts of what she had almost done. She had absolutely
not
been about to start batting her eyelashes at a priest. Nope, not her.

At least there was one good thing about all this—with a priest bearing witness to this whole mess, the people behind her would
probably
refrain from showering her with stinging insults and settle for dirty looks.

Faith dug in her purse again, avoiding eye contact with the priest. “Thanks, but it’s okay. I’m sure I have–”

“Lady,” the man waiting in line behind her said, “take the money so the rest of us have a chance to make it home before Thanksgiving.”

Faith’s shoulders dropped and she turned to the priest. “I can pay you back.”

“Don’t worry about it. Consider it my good deed for the day.” He flashed another grin that made her want to melt into a puddle at his feet. You know, before she remembered the whole priest thing. He handed her the two dollars and she paid for her cranberries and stuffed her belongings back in her purse.

She turned back towards the priest to offer her thanks, but he’d already disappeared.

She grabbed her bag and hurried outside before the other patrons had a chance to grab their torches and pitchforks.

Holidays sure did seem to bring out the best in people.

Out in the parking lot, Faith braced herself against the cold November chill, pulling her black pea coat tight around her body. A few yards away, her Good Samaritan leaned against a car, talking on his phone.

There was something bizarre about a priest talking on a cell phone. Like the time she’d driven through Pennsylvania and snapped a picture of an Amish woman filling the gas tank of a ginormous SUV. In this case, she decided to refrain from taking advantage of the photo op. She’d already ogled the guy. Taking a picture might elevate her to stalker status. She was pretty sure nothing good could come from stalking a priest.

He hung up the phone before she had a chance to escape the parking lot and her shoulders sagged. She might not want to be accused of stalking, but she should go give him a real thank you for helping her out. He
had
saved her from the unruly masses in Carlucci’s Market.

“Excuse me,” she called before he could get into his car, a sensible Ford. “I wanted to thank you again. I think you may have saved my life back there.” She jerked a thumb over her shoulder in the direction of the store.

“Is there somewhere I can send the money? I thought I had a little more cash in my wallet….”

He waved her offer away. “Don’t worry about it. Happens to all of us.”

Faith bit her bottom lip, trying to imagine the handsome, clean-cut man in front of her digging in his pockets for spare change.

As if he could read her mind, he nodded. “Even me. Once I was late for an appointment and didn’t have money for the parking meter. I asked a lady passing by if she had any change. I even told her I was a priest. She hit me with her purse and told me I should be ashamed of myself for impersonating a man of the cloth.”

Faith laughed at the picture he painted. His eyes dipped down for an instant and her laughter cut off on a choking wheeze.

Yikes.
Was it her imagination or had the priest just checked her out? She hopped backwards a step and stuttered out another quick thanks before scurrying away. Must be her imagination. Or maybe he was one of those pervy priests.

As she made the trek to the train platform, half her brain dwelled with disgust on the idea of him checking her out. The other half was happy she’d taken the extra few minutes to do her hair and put on some makeup this morning.

Faith trudged up the walkway of her mother’s duplex clutching her two cans of cranberries to her chest. Looking up at the house, her steps slowed. The faded brick and white awnings were exactly the same as when she was a kid. Warmth seeped slowly into her chest, but she couldn’t help but shake her head.

Distance-wise she was only a few miles or so from her own apartment. But her neighborhood, with its mixture of industrial buildings, artists’ studios, and funky little shops, was a long way from the tree-lined streets and neat rows of duplexes that marked the Brooklyn neighborhood she’d grown up in.

She clutched the wrought iron railing separating her mother’s stoop from the neighbor’s, ready to navigate the too-steep concrete steps in order to get to the welcoming warmth of her family home.

Definitely too steep
. Faith tottered up on her slim heels, wishing her feet were snug inside a toasty pair of Uggs instead of the heels that were sure to be the death of her. But there was no way she could arrive at her mother’s house for a holiday in comfortable clothing. Her mother would have her head if she showed up in the jeans and boots she wanted to wear. She’d opted instead for a little black dress and the silver heels of death. She might still catch hell for not being more festive, but for some reason she had no sweater sets featuring pumpkins and fall leaves. She rolled her eyes as she remembered the outfit her sister Maddie wore to Thanksgiving last year.

Faith raised a hand to knock, but the door burst open. She tripped over the threshold and fell into her brother’s arms.

He snatched her into the house and shoved her into the powder room just inside the front door before she could so much as blink. “Faith, thank God you’re here.”

She gave him the stink eye. “What the heck, Frank?”

He took her by the shoulders. “Just wait. Wait until you see the yummy morsel Mom invited to dinner.”

She scrunched her nose at him. Frank didn’t usually have such a flare for the dramatic, but they did seem to share the same taste in men. A fact their mother tried to ignore, often inviting a “nice girl” over for dinner in an attempt to convince Frank that being gay was just a phase. His excitement over his mother’s guest definitely raised her curiosity.

Frank slid her coat off her shoulders and opened the bathroom door enough to slip an arm out and hang it on the hall coat rack. He cracked the door a bit wider and poked his head out, ensuring the coast was clear before tugging her by the hand to the living room doorway. With a finger to his lips, he motioned for her to take a peek around the corner while he moved stealthily to the other side to get his own gander at their guest.