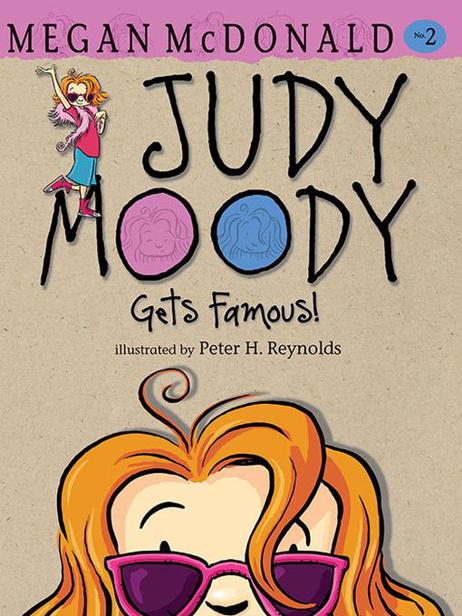 How Do You Spell Famous?

The Moody Hall of Fame

Fame Is the Pits

Judy Moody marched into third grade on a plain old Thursday, in a plain old ordinary mood. That was
before
Judy got stung by the Queen Bee.

Judy sat down at her desk, in the front row next to Frank Pearl.

“Hey, did you see Jessica Finch?” asked Frank in a low voice.

“Yeah, so? I see her every day. She sits catty-cornered behind me.”

Judy turned to look at Jessica, then whispered to Frank, “Where’d she get that? Burger Barn?”

“Well, it looks be-dumb, if you ask me,” said Judy, though secretly she admired the sparkling ruby-like gems.

“Who are you dressing up as? The Queen of England?”

“The envy spelling bee?” Judy asked. Judy didn’t envy anybody who had to spell long words into a microphone with a million and one people staring bug-eyed at her. She knew those people were silently yelling
FLUB IT UP
because they wanted their own kid to win.

“It’s a tiara,” said Jessica. “T-I-A-R-A. A tiara is a fancy crown like the Queen of England wears. Queen of the Bee has to know tons of definitions.”

“What word did you win for?” Judy asked. “Frank wants to know,” she added, in case Jessica thought
she
was interested.

Artichoke
! Judy could barely spell
meatloa
f
!
Give me S-C-I-E-N-C-E any day,
she thought. Was that the rule?
I
before
E
? Or was it
E
before
I
?

“I have spelling posters in my room at home,” said Jessica. “With all the rules. I even have a glow-in-the-dark one.”

“That would give me spelling nightmares. I’ll take my glow-in-the-dark skeleton poster any day. It shows all two hundred and six bones in the body!”

“Judy,” said Mr. Todd. “The back of your head is not nearly as interesting as the front. And so far I’ve seen more of it today than I’d like.”

Jessica tapped Judy and passed her a folded page from the newspaper. Right there, SMACK-DAB in the MIDDLE of the newspaper for the whole world to see, was a picture of Jessica Finch. It even said LOCAL GIRL BECOMES QUEEN BEE in big fat headline letters.

Dark Briggate Blues by Chris Nickson
She Is the Darkness: Book Two of Glittering Stone: A Novel of the Black Company by Cook, Glen
Three Rivers by Tiffany Quay Tyson
Dead Seth by Tim O'Rourke
Packing For Mars by Roach, Mary
Mosaic by Jeri Taylor
Ready for You by Celia Juliano
Tainted by Temptation by Katy Madison
Leaving Him: A New Adult International Romance Serial (Angelique's Greek Book 4) by Kay Brody
Get Happy by Mary Amato