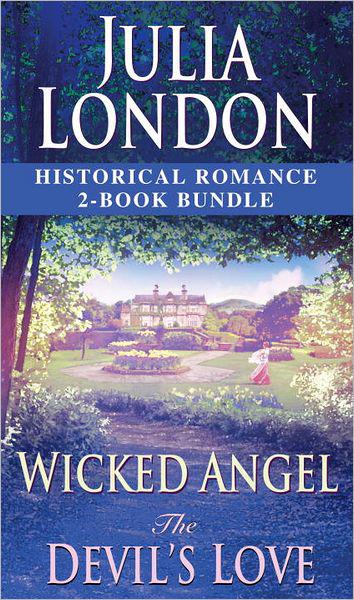 “I tolerated it,” Abbey replied, noticing that he seemed perturbed. She found this highly amusing, given that he had just been dancing with his former lover. “And did you enjoy yours?” she asked.

“I would not even call it tolerable,” he muttered. Michael frowned slightly and then pulled her onto the balcony, pushing her toward a dark corner.

“Is something wrong?” Abbey asked.

“Yes, something is wrong, Abbey. I have not kissed you all damned evening,” he said, pulling her to him and claiming her mouth in a bruising kiss.

He groaned and brought her hand to his lips. “Will there ever come a time when I don’t want you?” he whispered.

Michael laughed and led her farther into the shadows.

To Nancy, for making me do it;
Jim, for giving me the time and space;
and to Meredith and Christine,
for believing I could do it

The day dawned bright in brilliant contrast to the previous night’s raging storm, which had all but sunk the merchant vessel. An exhausted young man lay sprawled against the hull of the ship, still a little green from his first battle waged against nature’s wrath on the high seas. With his eyes closed and his body protesting against the slightest movement, he mused that it had been no less exacting than any battle he had ever fought on the continent.

A commotion above forced him to open one eye. Michael Ingram groaned when he spotted a little girl, dressed as a pirate, scampering about the quarterdeck. A scarf was tied about her dark curls, and her skinny legs were sticking out of a pair of men’s pantaloons cut below her knees and belted at her tiny waist. She was barefoot and looked as if she had not seen the inside of a tub in weeks. She also was waving a wooden sword about, the very same wooden sword she had driven into his stomach two days before when she had leapt from behind a barrel yelling
“En garde.”
On this beautiful, clear morning, she was shouting at something beyond the
ship—no doubt at whitecaps, as she was fond of doing—and yelling about pirates.

“Good God, look at her,” Michael muttered. Amid a pile of wood shavings, the man sitting next to him squinted up at the little girl. “Did you see her last night? In the worst of it, she was up there with the captain, waving that thing around as if she were fighting her make-believe pirates,” Michael complained.

The older man shrugged. “She be a little girl, Ingram. You pay her too much heed,” he responded in a typically gruff manner. Michael smiled. A bear of a man with fists that looked like hams, the giant had taken to the seas when the estate at which he had gardened most of his adult life was lost in an all-night gaming spree.

When Michael joined the crew, at first he had been very wary of the man. The rough crew outwardly resented the fact that he had been born to privilege. But circumstances—his father’s oppressive debt, to be precise—had brought him to Carrington, a minor baron his family had known some years ago and a man with a solid reputation for having mastered the seas. He had struck a bargain with Captain Carrington that made the crew his bedfellows, and Withers the most frightening of them all. Yet it was Withers who had saved him from certain bodily injury—if not death—by grabbing the scruff of his neck and yanking him from a scrap with three other men. From that moment forward, Withers had been a staunch ally and protector of the young man.

The little girl spied the two men and waved furiously to them. Neither moved.

“Do not encourage her, whatever you do,” Michael grumbled.

Withers grunted and turned his attention back to his whittling. “She ain’t interested in me, lad. It’s you she admires; that’s why she torments you so.”

Michael groaned again as the girl stooped to retrieve her doll before climbing down from the quarterdeck. Dragging the wooden sword behind her, she began to make her way through the storm debris on deck.

“She is a terror, that one. A bloody hellion. A menace to every man on this ship,” Michael avowed. “Captain Carrington has no shame letting her run amok like that. I don’t think the little beastie even owns a frock.”

Withers glanced up as she began to run toward them. “She’s a spirited thing, all right. Reckon that’s why the captain brought her along when her mama died a few years ago. There’ll be plenty of time for frocks and ribbons,” he muttered as the girl skid to a stop in front of them.

“Did you not hear me? Land ahoy!” she announced breathlessly, then wiped her runny nose with the back of her hand.

Michael glanced at her scabby knees and the dirt caked on her bare limbs. He shielded his eyes from the sun and looked up at the little hellion’s face. “There is no land, Abigail,” he said with the strained patience of a weary parent.

The girl fisted her hands against her hips and scowled at him. “There
is
land, and I saw it first! It’s a
pirate’s
cove, and we are going to attack and steal their treasure!” she announced triumphantly, lifting her doll high above her head. “All men are to lend a hand to turn the ship about! That’s the rule!”

“We are hundreds of miles from land,” Withers said impassively.

Ignoring the big bear, Abigail thrust her doll in Michael’s face. “
She
saw land too! Get to your feet, Michael Ingram, or my papa will have you flogged!”

“Abigail, run along,” Michael said, waving his hand at her as if she were a gnat. With a swiftness that momentarily stunned him, Abigail dropped her doll and slammed her wooden sword down on his foot.

Michael scrambled to his feet and glared down at the little girl before she could do it again. She jutted out her chin, squared her shoulders, and glared right back. That is when Michael did the unthinkable. He grabbed the doll out of her hand and angrily wrenched the head from its socket.

“She
cannot possibly
see land without her head,” he said, and thrust the mangled doll in her face. Abigail’s fierce look crumbled into one of horror as she gaped at the maimed doll.

“Good God,” Withers muttered to himself as the little girl’s mouth twisted into a blood-curdling scream.

Dropping her sword, she whirled about, racing for the captain’s cabin and screaming for her papa with each step. Her horrific screams brought half the sailors running toward the main deck looking as if they honestly expected to find pirates.

Withers pushed himself to his feet and clamped a large hand on Michael’s shoulder. “Get below, lad. I ain’t losing a perfectly good mate over this.” He shoved Michael with all his might toward the door leading to the lower decks.

Without argument, Michael quickly disappeared belowdecks with the broken doll, making his way through the darkened bowels until he reached his bunk. There he searched for a place to hide the incriminating doll parts. Finally, in desperation, he opened his trunk and buried them beneath his few personal belongings.

“That little beastie will be the death of me yet,” he muttered as he threw himself on his bunk and slung an arm over his eyes.

Several days later Michael had a change of heart after seeing the despondent little girl search the deck for her doll. He was not so hard-hearted that the poignant face did not stir him at least a little. Deciding she had paid sufficiently for her crime, he determined he would repair the damage as best he could and return the doll. With some twine, he managed to secure the head to the body, but in the process, he ripped the doll’s soiled dress. With a frustrated sigh, he held up the doll and studied it in the dim light of the lantern that swung above his bunk. An idea struck him, and well after midnight, he held up his creation for his bunkmates Withers, Bailey, and Hans to see. He had fashioned a pirate scarf out of the dress and had used a stick to make a peg leg where a cloth leg had once been. He had ripped the hem from the doll’s bloomers and
fashioned short pants like Abigail wore. With a square of dark cloth cut from his own coat, he had made an eye patch. The doll was transformed into a miniature version of Abigail the pirate.

“Perfect,” Hans drawled. “A miniature hellion to haunt my sleep.”

Michael laughed and tossed the doll into his trunk. But he never got the opportunity to return the doll to little Abigail. The next morning when the ship weighed anchor off the coast of Italy, Captain Carrington put Abigail on a small skiff to shore. To the collective astonishment of all hands, the little monster was dressed in a fashionable frock with satin ribbons and a lace collar. Rumor belowdecks was that she was too much for even the captain to handle, so accompanied by Carrington’s solicitor, she was being hauled off to school, where a host of nuns would try to tame her. Mildly amused, Michael watched from the main deck, the doll dangling at his side. The little beastie stood defiantly in the middle of the small boat, ranting at her papa for sending her away. As the boat made for shore, she shouted at Captain Carrington that she would return with a
hundred
pirates, stabbing the air with her fist for emphasis.