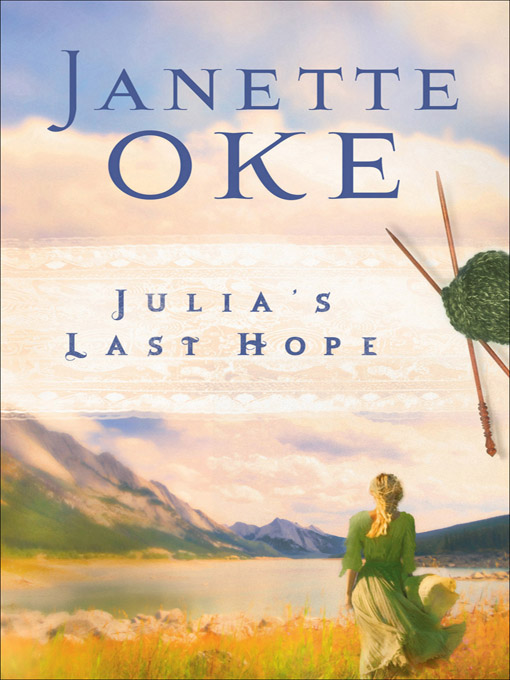 Return to Harmony
•
Another Homecoming

When Calls the Heart   •   When Comes the Spring

When Breaks the Dawn   •   When Hope Springs New

Beyond the Gathering Storm

The Tender Years   •   A Searching Heart

Once Upon a Summer   •   The Winds of Autumn

The Distant Beacon   •   The Beloved Land

A Bride for Donnigan   •   Heart of the Wilderness

Too Long a Stranger   •   The Bluebird and the Sparrow

A Gown of Spanish Lace   •   Drums of Change

Library of Congress has cataloged the original edition as follows:

Dedicated to the memory of

who went to be with the Lord

She was so much more than a doctor

to the many who knew and loved her.

JANETTE OKE was born in Champion, Alberta, to a Canadian prairie farmer and his wife, and she grew up in a large family full of laughter and love. She is a graduate of Mountain View Bible College in Alberta, where she met her husband, Edward, and they were married in May of 1957. After pastoring churches in Indiana and Canada, the Okes spent some years in Calgary, where Edward served in several positions on college faculties while Janette continued her writing. She has written forty-eight novels for adults and another sixteen for children, and her book sales total nearly thirty million copies.

The Okes have three sons and one daughter, all married, and are enjoying their fifteen grandchildren. Edward and Janette are active in their local church and make their home near Didsbury, Alberta.

No one in the household was prepared for the news. Julia Harrigan was in the east parlor, her back turned to the warm rays of the Saturday morning sun. It promised to be another delightful spring day. She hummed softly as her hands worked a dainty hem in a new tablecloth and smiled as the smooth fabric, fine linen imported from England, slipped through her fingers. She did love fine things.

From the dining room came the contented sound of Hettie’s low, rich singing as she cleared away the remains of the morning breakfast.

A gentle squeaking sound coming from the porch told Julia that her two daughters were seated in the double porch swing. She imagined their yellow-gold hair reflecting the morning sun, their wide, frilly skirts fanned out across the whiteness of the painted seat. Then the swing became silent, and Julia heard footsteps cross the veranda as the girls moved on to some other activity, chattering as they went.

“Papa was wrong,” she whispered, giving the needle an extra thrust for emphasis. “John Harrigan
can
support me in the manner to which I am accustomed.”

Julia almost chuckled at the thought of her father’s concern. She looked about her. The east parlor walls were papered with soft yellow roses, the furniture was white wicker, padded liberally and covered with yellow chintz. Everything about the room spoke of comfort and a family of means.

The large, bright entrance hall featured a winding staircase that led to comfortable and homey bedrooms above. Pastoral pictures, gentle in expression and presenting a sense of harmony and peace, lined the hallway.

In fact, everything about the house spoke of quietness and calm. Julia had always dreamed of having a home that would convey to her family and guests strong feelings of tranquillity. Knowing this, John gave her every opportunity to create a peaceful atmosphere in their home.

Raised in the East and educated in a fine school, Julia had been brought up to be a woman of gentle spirit. But when she met the young John Harrigan, a rugged westerner, she did not hesitate to make her choice known. Even her father was amazed at the way she put her dainty foot down.

“I want to marry him,” she insisted.

“Think, girl!” her father roared. “You are used to finery and ease. Do you think this rough woodsman will be able to provide it for you?”

“I really don’t care,” she responded. “Surely there is more to life than tea parties and silk dresses.”

“Yes, there is more to life. There is poverty and need and hungry, unkempt children. But I do not wish it for an offspring of mine.”

She pleaded then. “Oh, Papa. Please—I beg of you, don’t send him away. I would rather have little with this man by my side than a fine mansion and someone I don’t love.”

In the end her father gave in, though reluctantly.

“I am thankful that your dear mama isn’t alive to see you leave for that godforsaken wasteland,” he whispered as he kissed her goodbye after the wedding ceremony. “She would never forgive me.” His heavy sigh told Julia that he suffered because of her going.

“Come and see us someday, Papa,” she pleaded. “I will write to you as soon as we are settled.” And she kissed his cheek where the tears had left dampness.

So she and John moved West, settling in a remote village tucked in the Rocky Mountains. John took a job as overseer in a large lumber mill.

Julia stopped her needlework to concentrate on those early years of marriage. They had been difficult, requiring both her and John to make many adjustments. Thinking back, she was glad her father had not made a trip west to visit them at the time.

Then their lives took an unexpected turn. John’s uncle came to them in need. Born and raised in the wilds, Uncle George was a salty, rough man, crude in his manners, and Julia felt uneasy around him. But he was John’s kin, and when he took ill, Julia suggested he move into the spare room in the small house they rented.

By the time he died, Julia had changed her mind about Uncle George. At his simple funeral service she cried harder than any of the other mourners. She would miss him, she knew. She had learned to love him in the time that she had waited on him.

“You mustn’t weep so,” John cautioned as he placed his arm around her shoulders. “You must be extra careful.”

Julia looked at her increasing waistline. Not wishing to harm their unborn child, she stopped her crying, straightened her shoulders, and blew her nose in her linen handkerchief.

“I will miss him,” she said softly. “He really had a special sweetness about him.”

“I never thought I’d hear you call Uncle George sweet,” John teased. “Salty was the word you used to use for him. Remember how uncomfortable his quick, sharp tongue used to make you?” John pulled Julia into his arms. “But Uncle George surprised us, didn’t he? Underneath all that, he had a sweet spirit. We both will miss him.”

And Then Things Fall Apart by Arlaina Tibensky
Eyes of the Predator by Glenn Trust
The Wind From Hastings by Morgan Llywelyn
Vampire Food 08: He Smelled Like Peach Pie by Kat Barrett
Independence by Crane, Shelly
The Magus by John Fowles
A Lost Witch (A Modern Witch Series: Book 7) by Geary, Debora
Cruising for Love (The Escape Series Book 2) by Ann Omasta
Mr. Young (Seducing Mr Young) by Katelyn Skye
A Season in Purgatory by Dominick Dunne