Read Just What Kind of Mother Are You? Online

Just What Kind of Mother Are You? 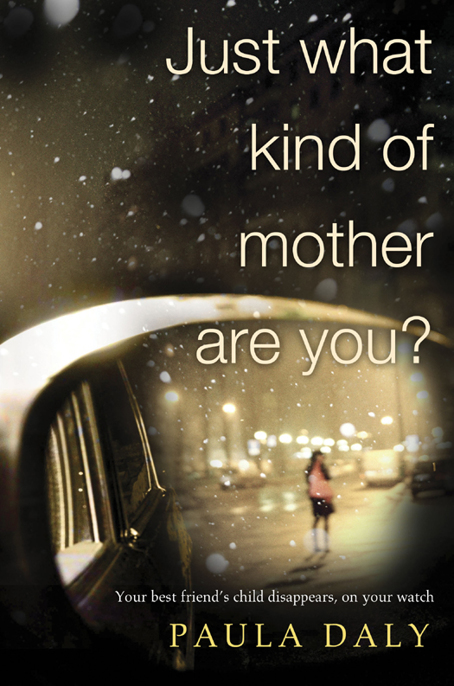 All rights reserved. The use of any part of this publication, reproduced, transmitted in any form or by any means electronic, mechanical, photocopying, recording or otherwise, or stored in a retrieval system without the prior written consent of the publisher—or in the case of photocopying or other reprographic copying, license from the Canadian Copyright Licensing agency—is an infringement of the copyright law.

Just What Kind of Mother Are You?
is a work of fiction. Names, characters, places and incidents are products of the author’s imagination or are used fictitiously. Any resemblance to actual events or locales or persons, living or dead, is entirely coincidental.

Published in Canada by Doubleday Canada,
a division of Random House of Canada Limited

He arrives with time to spare. Reverse-parking, he gets out and the cold hits him. Slapping him hard in the face and stinging his skin. He smells good. Expensive
.

He’s parked a few hundred yards from the school at the viewing point. On a clear day there’s an uninterrupted vista across the lake, over to the mountains beyond. In better weather there’d be an ice-cream van, Japanese tourists taking photographs. Not today, though. Not with the clouds so low in the sky, and not with the autumn darkness fast approaching
.

The lake water reflects the trees. It’s a muddy, coffee-coloured brown – soon to be slate-grey – and the air is still
.

Maybe he should get a dog, he ponders briefly. Something friendly – a spaniel perhaps, or one of those white, fluffy things. Kids love dogs, don’t they? It might just be worth a go
.

He checks for signs of life but for the moment he’s still alone. It’s just him, watching. Sizing up the scene, weighing up the risks
.

Risk assessment is part of his job. Mostly he just makes stuff up, putting down on paper whatever the fire-safety officer wants to read. Along with a few extras, though, enough to give the impression that he actually gives a shit
.

This is different. This, he really does need to look at carefully. Because he knows he can be rash. He knows he can be lacking in the necessary thoroughness and can end up paying for it later. He can’t afford for that to happen now. Not with this
.

He checks his watch. Tons of time before he’s expected elsewhere. That’s the great thing about his job, it leaves plenty of time for this other … interest
.

That’s how he’s thinking of it at the moment, just an interest. Nothing serious. He’s figuring things out, seeing if he likes it. Kind of the way one might do with evening classes
.

‘Come along for a couple of sessions of calligraphy before you pay in full.’

‘Conversational French might not be for you, after all.’

He knows his interest can wane quickly, but that’s what makes him successful, because, don’t all successful people have a low boredom threshold?

As a child he’d been told he couldn’t stick at anything, couldn’t sit still and focus on one thing at a time. He can still be like that so he needs to check before committing. He wants to be sure. He wants to be certain he’s going to follow it through before taking the first step
.

He gets back inside his car and waits
.

When he spots them his pulse flickers. Each is coatless, hatless, wearing shoes inappropriate for the season. The first to pass in front of the car are a couple of girls. Dyed hair, sulky expressions, big, shapeless legs
.

Next are two groups of boys. Fourteen- or fifteen-year-olds. Slapping each other across the backs of heads, laughing at nothing. One of them glances his way before sticking two fingers up. This makes him laugh. Harmless enough, he thinks
.

That’s when he sees her
.

She’s alone. Walking purposefully. Spine erect, with short, neat steps. She’s around twelve – though she could be older. She might just be young-looking for her age
.

She passes in front of the car and again his pulse quickens. He feels a shiver of pleasure flash through him as, momentarily, she slows. She’s hanging back from the group of boys, unsure of what to do. He watches rapt as her face changes, watches as it takes on a determined expression, and at once she makes the bold decision to overtake
.

Half skipping, half running, she flits off the pavement and picks up her pace. She’s fawn-like! he thinks, totally delighted by her. Her slim ankles are moving quickly as she pulls away from the group
.

He glances down and sees that his palms are wet. And it’s then that he knows for sure. Smiling, he realizes he had not been wrong to come here
.

He drops down the sun visor and checks his reflection. He looks exactly the same as he did ten minutes ago, but marvels at how different he feels. It’s as if all the pieces have clicked together, and he understands, perhaps for the first time, what people mean when they say, ‘It just feels right.’

Turning the ignition, he flicks on the heated seat and, still smiling, heads towards Windermere
.

I
WAKE UP MORE
tired than when I went to sleep. I’ve had five and a half hours and, after hitting the snooze button for the third time, I lift my head.

It’s the kind of tired I’m beyond finding reasons for. You know the sort, you first notice it and you think: What is
wrong
with me? I must have some crazy blood disorder. Or, worse, I must have contracted something really awful because no one can feel this tired. Can they?

But I’ve had the checks. The blood tests came back normal. My GP – a wily old guy who I’m guessing has had more than his fair share of women in complaining of being exhausted all the time – broke the news to me with a wry smile. ‘Sorry, Lisa,’ he said, ‘but this thing you’re suffering from … it’s just life.’

Often I feel like I’m in a giant social experiment. As if some bright spark decided to get all the women of the western world together as part of one big study: Let’s educate them! Let’s give them good, meaningful work to do! Then let’s see what happens when they procreate. Let’s watch it
blow
!

That’s the worst part. I can’t even complain without feeling guilty, because I’ve got everything. Everything a person could possibly want. Should want. And I do. I want all of it.

Where did I go to? I think, looking in the bathroom mirror as
I brush my teeth. I used to be so nice. I used to have time for people. Now I’m in a state of constant tired irritation and I hate it.

I’m overwhelmed. That’s the only word I can use to describe myself. That’s what it will say on my headstone.

Lisa Kallisto: she was just so overwhelmed.

I’m the first up. Sometimes my eldest gets downstairs before me if her hair is going through an unruly patch, if she needs to devote extra attention to it. But, usually, at six forty, it’s just me.

‘Get up an hour earlier,’ the magazines say. Embrace the quiet time, the time before the frenzy starts. Plan your day, make your tick list, drink your hot water with a slice of lemon in it. Detox and you
will
feel the benefits.

I get the coffee going and start scooping kibble into bowls. We have three dogs, all Staffordshire Bull Terrier crosses – not what I’d pick if I had the choice, but they’re good dogs. Clean, good-natured, good with the kids, and as I let them out of the utility room where they sleep, they fire past me in a rush of giddiness, sit by their bowls, expectant. ‘Go ahead,’ I say, and they dive in.

Walking them in the morning is generally my husband’s job, because Joe often works late. You’re imagining him in an office, tie pulled loose, hair ruffled, deadline looming? I do it myself sometimes. Never thought I’d marry a taxi driver. Especially one with ‘Joe le Taxi’ painted on the side of his people carrier in great big silver letters.

Joe did an airport run down to Heathrow last night. Some Arabs offered him double the usual fare if he acted as their personal driver for the time they were here in the Lakes. They wanted the usual: trips to Wordsworth’s house, Beatrix Potter’s farm, boat rides on Ullswater, Kendal Mint Cake. I heard him roll into bed around four, round about the time I’d woken up panicking that I’d forgotten to post a
Congratulations on Your New Baby card out to one of my kennel girls.

‘Get a good tip?’ I mumbled, my face pushed hard into the pillow, as Joe wriggled in next to me, smelling of beer.

He always keeps a couple of cans in the car if he’s on a late. Then, he says, he can get straight off to sleep the minute he climbs into bed. I’m sick of telling him it is not good – taxi driver swigging away at the wheel – but he’s beyond stubborn.

The Elevator: A 21st Century Romance (Book 1) by Ashford, John
Catacombs by Anne McCaffrey
Clash by Rick Bundschuh Bethany Hamilton
The Destroyer by Tara Isabella Burton
The Cry of the Sloth by Sam Savage
It's All About the Bike by Robert Penn
Diann Ducharme by The Outer Banks House (v5)
Negotiating Skills by Laurel Cremant
De Valera's Irelands by Dermot Keogh, Keogh Doherty, Dermot Keogh
Running With Argentine by William Lee Gordon