Keena Ford and the Second-Grade Mix-Up 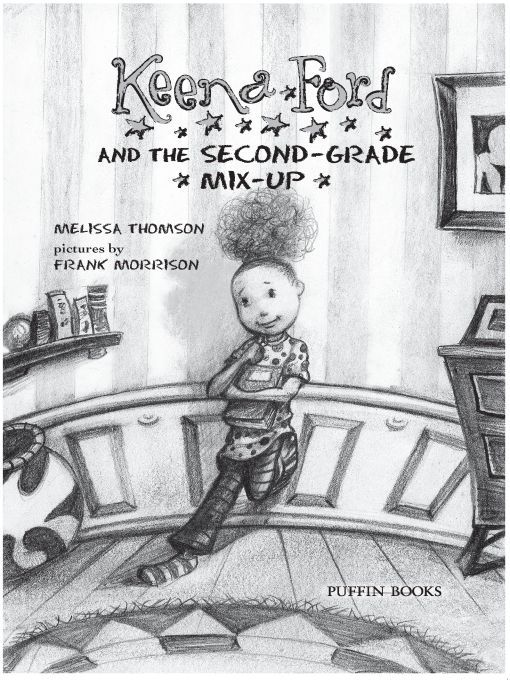 Table of Contents
Title Page
Copyright Page
Dedication
WEDNESDAY, AUGUST 25
THURSDAY, AUGUST 26
FRIDAY, AUGUST 27
SATURDAY, AUGUST 28
MONDAY, AUGUST 30
TUESDAY, AUGUST 31
WEDNESDAY, SEPTEMBER 1
THURSDAY, SEPTEMBER 2
FRIDAY, SEPTEMBER 3
SATURDAY, SEPTEMBER 4
THE BIG BIRTHDAY MIX-UP
“Excuse me, ladies. I am very excited to report that we have a class birthday tomorrow, September 2. Keena Ford will be the first student to wear our special birthday crown.” Then she looked at me and smiled. “Keena, I hope you like chocolate cake,” she said.
I tried to open my mouth to tell Ms. Campbell that there must be some mistake. My birthday is February 9. But I thought about that birthday crown. And I thought about the cake. I love birthday cake almost as much as I love pudding pie. So when I opened my mouth, this was what came out:
“Yes, Ms. Campbell. I LOVE chocolate cake.”
OTHER BOOKS YOU MAY ENJOY
Amber Brown Wants Extra Credit
Cam Jansen and the Secret Service Mystery
Cam Jansen and the Sports Day Mysteries, A Super Special
Cam Jansen and the Summer Camp Mysteries, A Super Special
George’s Marvelous Medicine
Hank the Cowdog 52: The Quest for the Great White Quail
Horrible Harry and the Triple Revenge
Trouble According to Humphrey
The Twits
Paula Danziger
David A. Adler
David A. Adler
David A. Adler
Roald Dahl
John Erickson
Suzy Kline
Betty Birney
Roald Dahl 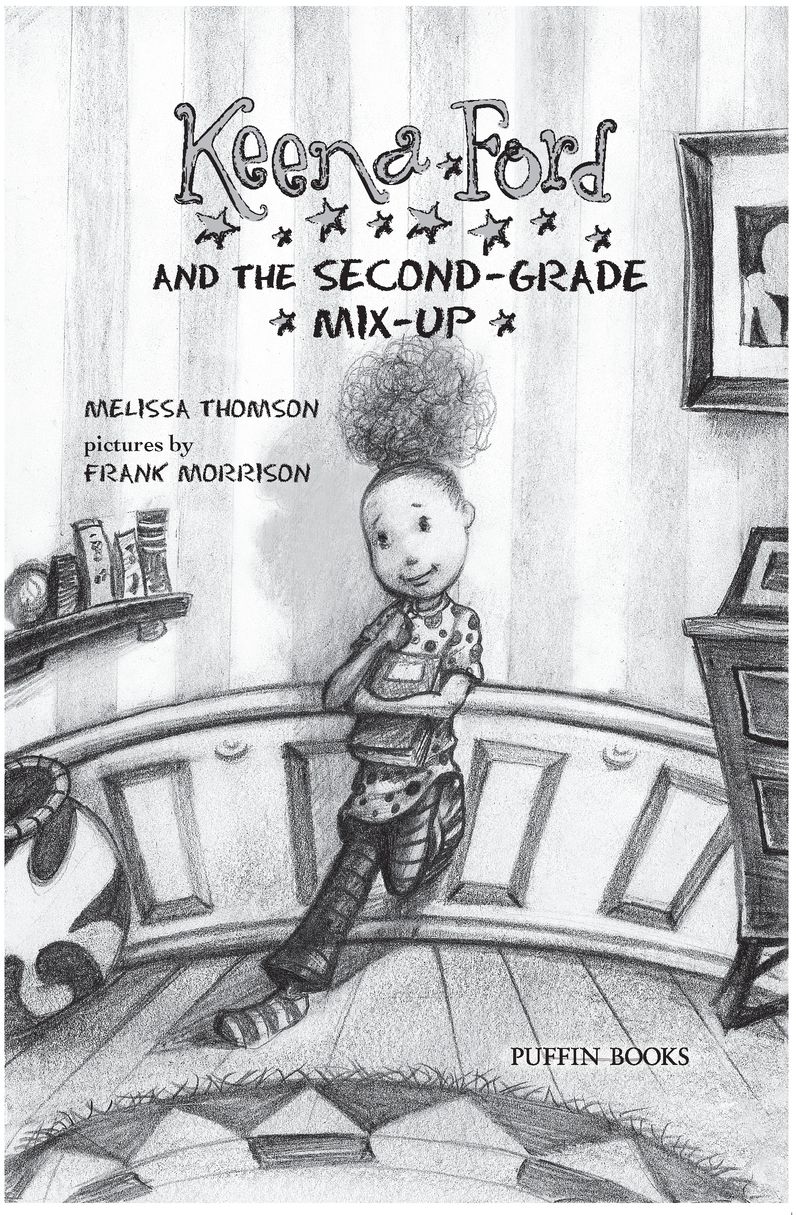 To the students of Emery Elementary
in Washington, DC
—M.T.
To my wonderful daughter Nia
—F.M.

WEDNESDAY, AUGUST 25
4:30 P.M.
I’m Keena, and I am the MOST important person in this journal, because it is MY journal. But there are some other important people too, like my mom and my brother, Brian. I live with them in our apartment in Washington, DC. Brian is starting middle school and he thinks he is SO cool. But he still sleeps with his blankie! Ha! I haven’t told his friends yet. I’m waiting for the perfect time.
My dad is really important too. He lives in Maryland and I visit him on weekends. He has a bald head and a fish named Henry.
Someone else who is important is my very best friend, Eric. He and his dad live in our building in the apartment right above ours. This other girl in our building, Tiffany Harris, says I can’t be best friends with a boy, but what does she know? I tried being friends with her, but all we did was have stupid tea parties. And her tea tasted like a wet paper bag. 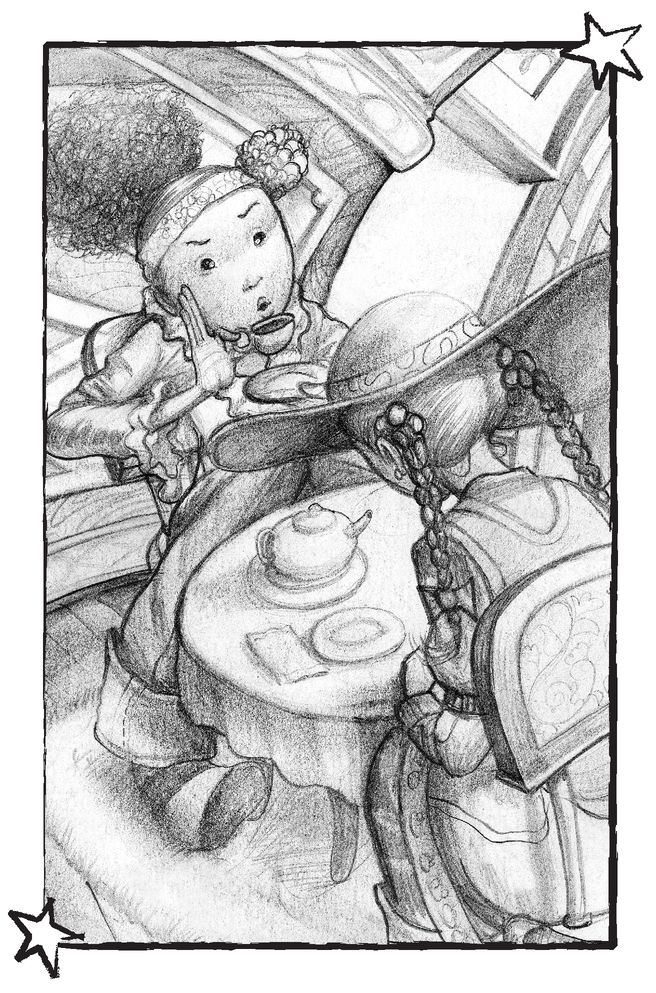 I guess I should write down that Mr. Lemon is important too. He teaches time-out. It’s the class where you go if you broke a rule by mistake. You go there when the other kids go outside to play after lunch. Mr. Lemon and I spend a LOT of time together.
I think I will probably write about some other people, but they won’t be as important as the ones I already said.
My mom got me this journal because I behaved myself at the doctor’s office this afternoon. It was my back-to-school checkup, and I had to get one shot. I cried, but I didn’t pinch anyone. At the doctor’s office, the nurse is allowed to stick you with needles, but you are not allowed to pinch. I learned this last year when I had to get a shot. The nurse said, “This will feel like a pinch for just a second.” And then I said, “YOW!!” because it hurt, and hurt for a LONG time. Then I said, “That did NOT pinch for just a second. It pinched for a very long time.” She just looked at me, so I showed her what I was talking about. I grabbed her arm and pinched—HARD. Just so she would know what it really felt like, instead of telling kids it will only pinch for a second. Then I learned that you never, ever pinch or you get in big trouble. Last year I did NOT get a journal.
But this year I was very good, so Mom let me pick out my journal myself. She said writing in a journal is a great idea because I can get my feelings out without yelling or pinching. And I can write down the things that you are not supposed to say out loud, like: “Brian just passed gas.”
I say a lot of things that you are not supposed to say out loud. I think I will have a lot to write in my new journal.
I am a very good writer for my age. My teacher last year told me that. She also said that if I spent more time writing and less time worrying about other people’s business, then I could be a famous writer someday. But if I don’t pay attention to other people’s business, what will I write about?
Mom bought me a dictionary to go with my journal so I can spell big words. Already I had to look up “attention,” “worrying,” and “business.” But I didn’t have to look up “dictionary” because it’s right on the front of the dictionary. Isn’t that handy?
THURSDAY, AUGUST 26
4:00 P.M.
Look! So far I have been writing in my journal every day. I knew I would have a lot to write about. Today was a big day because it was the last morning of camp for Eric and me. Last night Eric called me and sounded very mysterious. He said, “Be sure to wear your camp T-shirt tomorrow.”
“But MONDAYS are camp T-shirt days,” I said. “Tomorrow is Wacky Thursday.” I had already picked out my final Wacky Thursday outfit. I was going to wear what I wore for Hallow een last year when I was a cat who was also a princess and also a witch.
“Just please wear your T-shirt, Keena. I will explain the plan tomorrow,” Eric said.
“Or you could explain it right now,” I said.
“What’s that? Keena? I can’t hear you. I think we are going through a tunnel.” Then I heard a clicking sound as he hung up the phone. I know that sometimes when people drive through tunnels their phones stop working. But there is no tunnel in Eric’s apartment, unless you count the time we tried to dig a tunnel to my apartment through a loose floor tile. We got in big trouble for that one.
I thought about not wearing my T-shirt to show Eric he’s not the boss of me, but I was too curious to see what he had planned. So when Eric arrived this morning, I was wearing my T-shirt and my cat ears. I opened the door to see Eric in his T-shirt, hiding something behind his back.
“Ta-daaaa!” he said, and held out two permanent markers. 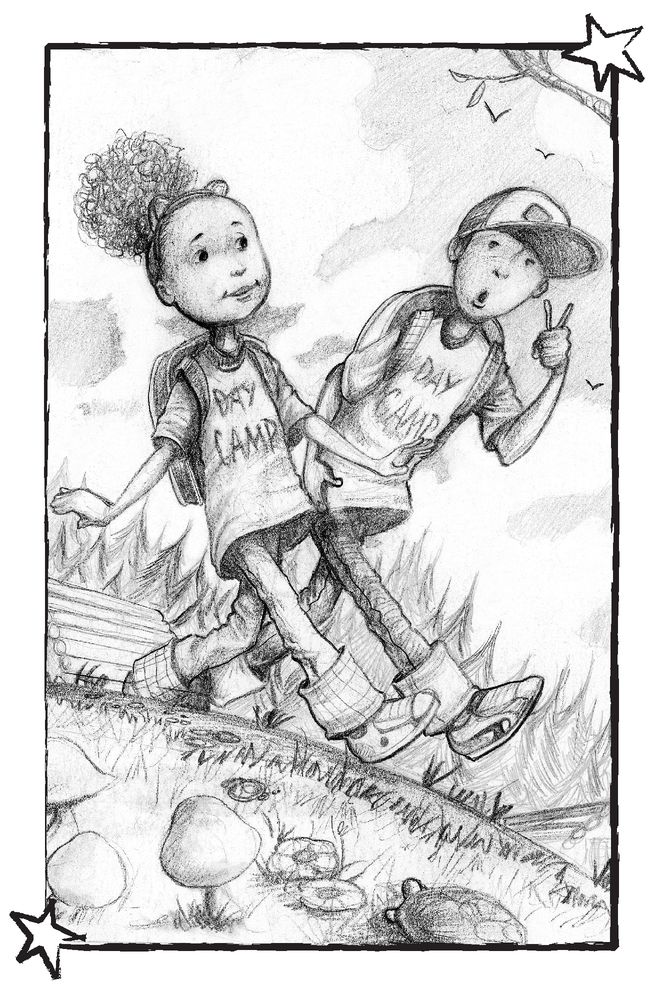 “Huh?” I said.
“When we get to camp, we’ll get everyone to sign our T-shirts with a permanent marker. Then we will always remember our friends from camp!” Eric seemed very excited.
I tried to act excited too, because even if Eric’s great ideas aren’t that great, he IS my very best friend.
“Okay,” I said. I was thinking to myself, “What’s so great about two old markers?” But at least I had my cat ears.
You know what, though? Eric’s idea was really good! We got all of the other kids and even the counselors to sign our T-shirts. Everyone else wished they had worn their camp T-shirts too. It was lots of fun with only one problem. The problem was that the ink went through the shirt and onto my skin in some places, so it says “Nancy” on my arm and “Leonda” on my stomach. I can’t quite seem to wash it off. But I’m sure my mom can fix it with a little scrubbing, once I show her.

Man From Tennessee by Greene, Jennifer
Use Your Loaf: How to bake bread at home and get perfect results by Daly, Jason
How Evan Broke His Head and Other Secrets by Garth Stein
Holy Island Trilogy 03 - The Final Countdown by Sheila Quigley
Her Own Best Enemy (The Remnants, Book 1) by Justlin, Cynthia
Sexual Solstice by Bradley, Tracey B.
A Spoonful of Luger by Ormerod, Roger
Fearless in Tibet: The Life of the Mystic Terton Sogyal by Pistono, Matteo
The Hanging in the Hotel by Simon Brett
Fan by Danny Rhodes