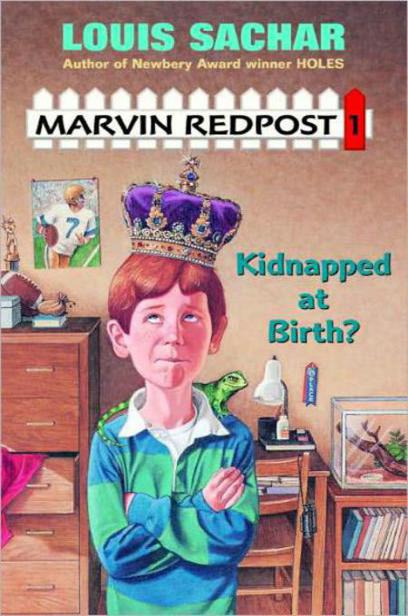 Could Marvin Redpost be a prince?

He knew in his bones it was true. He could feel his royal blood swirling around inside him.

“I was kidnapped the day I was born,” he said. “I was just a baby but I can remember now. The kidnappers hid me in a hospital. Mr. and Mrs. Redpost took me home from the hospital by mistake.”

“You remember this?” asked Mrs. North. “From when you were one day old?”

“It’s kind of a haze,” Marvin admitted. “I don’t remember exactly what the kidnappers looked like. One of them had a big black mustache.”

Dedicated to Rebecca and Sam
,
with special thanks to their parents

Marvin Redpost
put down his pencil. He was the first one done.

He took his report to Mrs. North.

He had to copy it over. “Neater this time, Marvin,” said Mrs. North.

He was in the third grade. His class had been learning cursive writing.

“We’re lucky to be left-handed,” said Mrs. North. “It means we have royal blood.”

She smiled at him.

He returned to his seat.

He picked up his pencil and wrote as fast as he could.

He had to write twice as fast this time, just to catch up with everyone else.

He had to write a report on something he read in
Current Events. Current Events
was a newspaper for children.

This is what Marvin wrote.

The King of Shampoon is looking for his lost son. The son’s name is Prince Robert. Prince Robert was kidnapped the day he was born. That was nine years ago.

Prince Robert is nine years old. He has red hair and blue eyes. Unless he’s dead.

The King is going all around the world looking for his lost son. He hopes he isn’t dead. So do I. This week the King is in Washington, D.C.

Marvin finished writing just as the bell rang for recess. He gave his report to Mrs.
North, then ran outside to play wall-ball.

Marvin was nine years old. He had red hair. He had blue eyes.

He lived in a small town, not too far from Washington, D.C.

You Can Do Anything!

After school they all went to Stuart’s house.

“Put your dog outside,” said Nick.

Nick was brave. He once rode his bike full speed down Suicide Hill. But he was afraid of Fluffy, Stuart’s little white dog.

“Where’d you get that stupid dog?” asked Nick.

“He is too,” said Nick. “He looks like a rat that ran through a cotton candy machine.”

“We got him at the pound,” said Stuart. “I picked him out myself.”

Marvin was afraid they’d get into a fight. Nick and Stuart were always getting into fights.

“I think my parents picked the wrong baby,” Marvin said.

“At the hospital,” said Marvin. “They took the wrong baby home. They’re not really my parents.”

He had been thinking about this all day. He didn’t really believe it. He just wanted to keep his best friends from fighting.

“I was kidnapped the day I was born,” said Marvin.

Stuart was smart. It sometimes amazed Marvin how quickly he caught on to things.

“Marvin’s parents are really the King and Queen of Shampoon,” Stuart explained.

“No,” said Stuart. “Don’t you remember what we read in
Current Events
? The Prince was kidnapped at birth.”

“I have red hair and blue eyes,” said Marvin. “Everyone else in my family has brown hair and brown eyes. And I’m left-handed. That means I have royal blood.”

“Wait a second,” said Nick. “If your parents are the King and Queen of Shampoon, then how did you end up in the hospital here?”

Marvin thought a moment. He hadn’t figured that part out.

“Simple!” said Stuart. “The kidnappers had to hide the baby somewhere. Well, what better place to hide a baby than with a bunch of other babies in a hospital?”

“Or,” said Stuart, “maybe your parents didn’t get you at the hospital. Maybe you’re adopted. They just haven’t told you.”

“I bet you that’s it!” said Nick. “The kidnappers left you in a garbage bin. Then a policeman found you and took you to an orphanage. And then Mr. and Mrs. Redpost adopted you.”

“Or else,” Stuart whispered, “Mr. and Mrs. Redpost might be the kidnappers.”