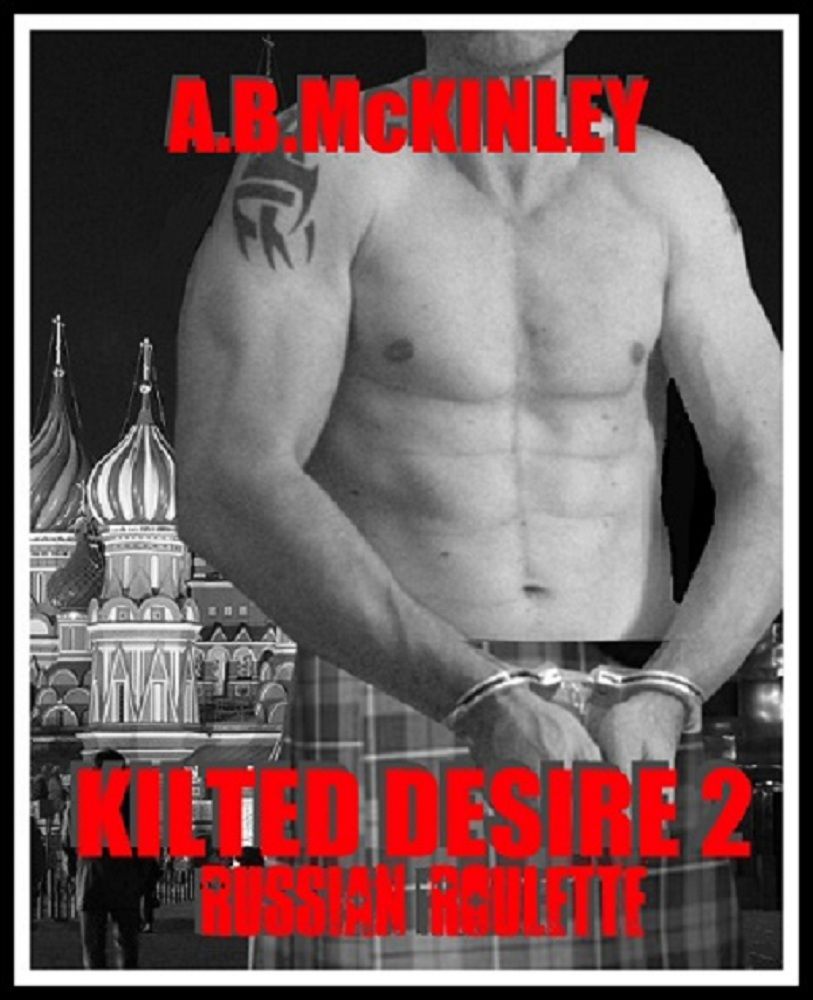 This
e-Book is licensed for your personal enjoyment only. This e-Book may not be
re-sold or given away to other people. If you would like to share this book
with another person, please purchase an additional copy for each
recipient
. If you are reading this book and did not purchase
it, or it was not purchased for your use only, then please return to Amazon.com
and purchase your own copy. Thank you for respecting the hard work of this
author.

All characters appearing in
this book are fictitious. Any resemblance to real persons, living or dead is
purely coincidental.

I truly appreciate it.”

“A Highly Recommended
read! Once again, Author A.B. McKinley has given the reader a story packed with
sexy romance and thrilling action. Hero Scott Maclaren races to beat the clock
while traveling around the globe with old friends and new.

The love interest in his
life,
inspires him to face brutal villains with the
skills of a warrior and the honor of a solider. Travel with Scott to
California, Colorado and Russia and experience hot action, sexy romance
combined with white-knuckle danger leaving you on the edge of your seat.
Romance lovers, action thrillers, suspense junkies will burrow deep for
uninterrupted time to read
Kilted Desire - Russian
Roulette
.
It’s simply impossible to put down once you start reading.”

“Never before has a book held more heart-felt betrayal. Scott Maclaren
only wanted a peaceful life after he returned from Baghdad. As you move through
the pages and away from the Ohio setting, the story becomes more suspenseful.
It evolves into a fast-paced action-adventure, romance. You will fall even more
in love with the main character, who has once again risked life and limb to do
what is right.

This time, Scott
Maclaren’s
honor and
integrity places him in danger, and his military skills and background will be
utilized to their fullest! This was my favorite part of the book. I truly loved
the Scottish duo, and the dynamics between these two characters. Scott
Maclaren; in my opinion; is Scotland’s James Bond.

There are characters you will love and ones you will love to hate even
more! All questions you may have carried from book one will be answered… There
is conflict, right from the start, very sensual romance and of course,
betrayal… as only A.B. McKinley can deliver with his art of storytelling.”

“Kilted Desire -
Russian Roulette
is an amazing follow up to the first Kilted
Desire. AB McKinley has truly done it again!! This book has Action, Adventure,
Intrigue
and of course Romance...

McKinley takes his hero
Scott Maclaren, to new heights of awesomeness. He goes on a mission, fights the
bad guys, deals with betrayal, and finds a way to work in some fun.

I love how this author
makes you feel like you are there with the characters, and feel exactly what
they are feeling, from the adrenalin rush of the fights to the passion of the
love scenes. I would recommend this book to everyone that I know...* * * *
* 5 Stars”

“This book has everything you could ask for action, adventure, betrayal,
love and a main character to make any woman's heart beat faster.”

“The sequel in A.B.
McKinley’s Kilted Desire series was fabulous. The romance was sweet, the
betrayals bitter, and the suspense leaves one thinking, just one more
chapter. Once again Scott is our Scotsman in shining army; be prepared to
swoon, ladies!
Superb.
Kudos to A.B. for another
impressive adventure!
Anticipating the next.”

“This is the second
installment in A.B. McKinley’s, Kilted Desire Series.

In
Kilted Desire
-
Russian Roulette
,
Book Two, there is
betrayal coming from every side of main character, Scott
Maclarens
’
life. This story is an action-packed, on the edge of your seat adventure.

I finished this book in
one day and was sad when it ended. We are taken on a whirlwind ride to Russia.

“Just as always, he is
still a man of his word and follows through completely with what he says he
will do. Meet Batman and Robin out to save the day, with a new Scottish ‘
hotty
’ introduced. When I am reading one of McKinley's
books, I find it brings me to Scotland, the way he talks. I swoon all day.”

“Kilted Desire 2 is the kind
of excitement and fervor I
crave !
The story wasn’t
predictable, which kept me more intrigued with every page I read! Suspense
combined with sultry passion is the perfect recipe in a book, and I'm HUNGRY
for more!!!!!”

“I just read
Kilted Desire – Russian
Roulette
by
A.B. McKinley and I loved it!
Lots of action, adventure,
romance and mayhem.
This book is just as good as book one. No let me
rephrase that, book two is much, much better than book one.

There is passion and betrayal. What follows is fast paced,
exciting, scary,
dangerous
with romance
thrown in for good measure. You MUST read this book to find out what
happens with the intrepid, brave Scotsman, Scott Maclaren.

Hopefully, this will be the second in what will be a long series of
action/adventure books featuring Scott Maclaren and maybe his Scottish mate.
They make an excellent team.”

It was late when
they awoke the next day. There was a considerable amount of New Year’s action
going on in the bedroom until the early hours of the morning, so they both
slept in.

“Guid morning,” said
Scott, as he cupped her breasts. He was lying behind her, his body pressed
against hers and his arms wrapped around her.

“You’re bad,” she
replied, as she reached her hands behind her and caressed his thigh.

“Damn, I love waking
up with yer,” he said, still holding her tightly from behind, as they remained
on their sides.

“Good.
Because you are going to be doing it for a very long time.”

“Suits
me!
I guess we should think
aboot getting up. It’s nearly noon.”

“Come on. Let’s get
up, we’ve got things to do,” she said, laughing. They both got out of bed and
got dressed.

They planned to go
to Katie’s parent’s house later that afternoon. It was already arranged for Michael
to drop the girls off over there at 5:00 p.m. It was fast approaching 3:00 p.m.
Scott sat on the couch and watched a basketball game on TV. He waited patiently
for Katie, as she finished doing her hair and make-up so they could leave.

The game had just
gone to a commercial break when he heard something. A car pulled up outside the
house. He drew back the curtain and saw Michael and the girls just as they were
getting out of the car. Michael grabbed the girl’s suitcases from the trunk and
handed them to his daughters. The girls started walking up the slippery walkway
towards the house.

Scott opened the
door, and walked halfway down the path to help them. They struggled to pull the
heavy cases up the slight slope, due to the ice. Michael appeared not to care.
He walked back around the car and reached for the driver’s door. He stopped. He
looked across the yard at Scott. Pointed at him, and made a slashing motion
with his hand, as he moved it across his neck. He then got into his car. Scott understood
the meaning. Michael was letting him know that he intended to kill him.
Which did not bother him in the least.
Scott was only sorry
the girls witnessed it. ‘Michael is an idiot!’ Scott thought. Michael screeched
the car’s tires as he pulled away. Scott quickly ushered the girls into their
warm house.

Katie came down the
stairs to find both girls visibly, very upset. She managed to get them calmed
down and distracted
them
by letting them play video
games. She walked back into the living room to talk with Scott.

“He did this on
purpose! He knew he was to take them to my parent’s later. He came here early,
because he knew you would be here.”

“Aye, that does nae
surprise me.”

“The girls said he’s
been mean to them all week! He has asked them questions about you and they
don’t know what to say. That’s it. He’s never taking them again,” she said
angrily.

“He does nae care
aboot them Katie, yer know that. But, yer
cannae
stop
him reet now from seeing them. We’ll have tae talk tae an attorney tae see what
can be done and where we stand.”