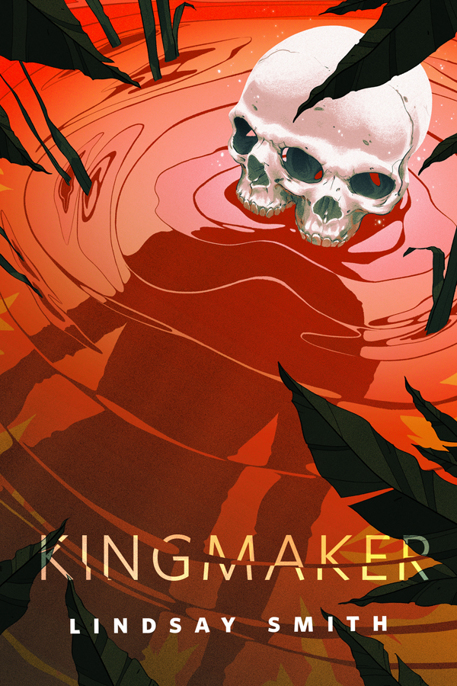 Vera was quickly learning the sounds different bones made when they shattered. The twinkling smash of finger bones as fist met face—the meaty bite of the jaw, with the added arpeggio of teeth knocking loose. Wet, sucking slaps as ribs popped and punctured the lungs they encased. Vera forced herself to lean forward for a better view of the brawling ring. There it was, the dry autumn-leaf crackle of a massive thighbone splitting in two.

And now for the reigning champion’s signature move: a slow, rolling crunch up his opponent’s spine. It reminded her far too much of the harp lessons in her parents’ parlor that she’d left behind for this life.

“And there you have it, folks! Another flawless victory from Jorn, fighting for the Stargazers tonight!” The announcer stepped into the ring, as far as possible from Jorn’s hulking, heaving, gasping mass. “Bad luck for the Bayside gang. But I’m sure they’ll cough up another challenger for next week!”

The roaring, teeming crowd, frothy as the storm-tossed Bay of Dreams, might as well have been whispering for all Vera heard them. Her gaze fixed on the blood-spattered behemoth that was Jornisander, bodyguard to the Stargazers gang boss. No, it couldn’t be mere coincidence that the Stargazers had insisted on this brawl as the venue for their meeting. The Stargazers wanted to make clear the cost of breaking an agreement with them; wanted to let Vera know that she wasn’t bargaining with timid hares.

But then, Vera wasn’t the timid hare she was portraying, either.

“Now there’s a smart fighter,” Vera’s companion, Tyrond, said, gesturing toward Jornisander in the ring. “He fights slow, almost lazy. Lets those muscles do the work for him while his opponent wears himself out.”

“Looks dumb as rocks to me,” Vera said. He’d have to be, to fling himself into death matches again and again. Not that she reckoned he had much choice in the matter.

Tyrond laughed to himself. “Yeah, probably. Makes for a better bodyguard that way. Stargazers don’t want some smarty learning all their secrets.”

Vera allowed herself a narrow smile. That was her true purpose here: not to broker some tedious deal, but to learn all of the Stargazer gang’s secrets for the Ministry of Affairs. Her gaze skimmed over the pulped corpse of the other fighter as the fight organizers struggled to pry it off the sawdust ring. He wasn’t the only one with a death wish here tonight.

“Let’s wait for the riffraff to clear out. The Stargazers should be sending out a lieutenant to meet with us soon,” Tyrond said.

“They’d better,” Vera huffed. “My client isn’t in the business of waiting.”

But inside, she was a roiling sea of nerves. The fresh tang of blood in the air mingled with the afterbirth of her dreams from last night. Violent dreams, blossoming with bruises, threats, a knife blade at her throat. Most Barstadters interpreted their dreams as a promise from the Dreamer, a gentle nudge toward wonderful things to come. But Vera’s always felt more like a warning.

Dreamer, I hope you know what you’re doing,
she prayed, and waited.

“Please, please, come inside. Make yourselves at home.”

The cramped tunnel dead-end looked decidedly unlike any home Vera had ever known, but she followed the lieutenants inside without protest. If the stacks of busted wood pallets, rags, and burlap sacks and the sickly tang of Dreamless resin in the air seemed unusual to her guide, Tyrond, he didn’t show it. Vera sat on the painted crate the lieutenant offered her, gathering her skirts around her with just enough show of prissiness to suit the character she was playing.

“I’m Synarius. First lieutenant of the Stargazers.” The man drummed his fingers against his well-fed belly—one of the few she’d seen since they’d entered the tunnels this evening. “And this is my second—”

“I don’t give a damn who you are. Who you aren’t is the leader.” Vera slipped into a righteous rage like a tailored glove. “You don’t believe my client warrants meeting with the boss?”

Behind Synarius, his bodyguard—Jorn, the brawler from that night’s match, she realized—began to straighten, as if he’d just deemed her a potential threat. Nightmares, but he was a slow one. If she’d thought to smuggle a blade down here with her, she could probably slit Synarius’s throat before he had a chance to react. That would save the Ministry of Affairs—and the whole damned Empire—a lot of trouble. Skip over this whole tiresome masquerade.

That’s what bored Vera about spywork—the slow, agonizing crawl toward a far-flung goal. It was worse than when she’d had to attend finishing classes, back when the most that was expected of her was embroidery and harp-playing. Stitch forward and back, forward and back, and never make a lick of progress at all. Well, it was time to plunge ahead.

“The Stargazers boss is a very busy man, and you, my dear, have yet to prove your value to him. Not that you aren’t lovely to behold,” Synarius added, sharing a wry grin with his second lieutenant. “But I’m guessing your ‘client’ sent you here for a different purpose.”

Enough games. “Eighty crates of Dreamless resin,” Vera said. “Three tons of regulated stone from the northern colonies, complete with papers. Five artifacts smuggled out of the City of Secrets in the Land of the Iron Winds.”

“You smuggled something out of Birnau?” The second lieutenant’s eyebrows danced toward his hairline. “But how…?”

“And enough grain alcohol to scrub your brains right out of your skull. That’s what my client’s looking to move.” Vera sat back. “We could do it ourselves, it matters not to us, but as a
courtesy
to the Stargazers as the reigning gang of this tunnel branch…”

“Oh, please, don’t do us any favors.” Synarius’s lips snapped taut in a mirthless grin. “If your client tries to offload a single item in our territory, we
will
have your hides for breakfast. I’m sure you know what the Stargazer boss is capable of.”

Vera had heard plenty of tales of the Stargazers’ cruelty. The usual dreck, about making a stew of his tunneler subjects who displeased him, bodies strung up by their intestines over the tunnel entrances … the sort of limitless violence only a life in the tunnels could allow. No one in the daylight world of Barstadt City behaved this way. Not where polite society could see. But Vera feared only one criminal mastermind, and she was fresh out of fear to spare for the ruthless Stargazers.

“Oh, come off of it. We’d find some other tunnel branch where we can sell our wares. Even you must admit the Stargazers don’t own the
whole
city.”

Vera rolled her eyes. “In any case … The deal is yours to take, or not. Feel free to talk it over with the Stargazers boss, then send for us through Tyrond here. If we don’t hear from you before Tremmer’s Month is out, then we’ll find someone else more amenable to our terms.”

Synarius looked to his second lieutenant, some wordless exchange passing between them, then back at Vera with a nod. “Very well. You’ll have your word by the end of the month if we’re interested.”

“Dreamer bless,” Vera said, with a curtness both she and her persona felt. She started to stand, but then, with a show of reluctance, settled back onto her crate. “Oh. I’m afraid there’s one more thing my client asked me to investigate.”

Synarius grunted to himself. “Yes. Of course. By all means, make even
more
demands.” The tips of his teeth showed through his grin. Tyrond’s hand fell on Vera’s shoulder—a warning.

But this was the whole purpose of her mission here tonight—not to arrange some foolish trade deal with the Stargazers, and certainly not to watch tunnelers beat the pulp out of one another. Vera was here to find the chink in the armor of the entire underground criminal system, and pry at that chink until it was a gaping wound.

It was her business to do so. And given recent events, it would be her distinct pleasure to watch the whole corrupt system burn.

“My client has asked me.” She rolled her eyes again to indicate that this was wholly her foolish client’s idea and to please, Dreamer, don’t gut her on the spot; she added a sly grin to scaffold it. The knowing smile of a servant:
Aren’t the people we serve such silly fools? Aren’t we fools ourselves to be subject to their whims?
A smirk to build camaraderie. “My client has heard some upsetting rumors of late—that some group of vigilantes amongst the tunnelers have been threatening the order down here.”

Synarius heaved a sigh, but his second lieutenant, Vera noticed, stiffened and stood straighter. Interesting. What was his name again? That’s right, Synarius hadn’t introduced him. Even
more
interesting. “I assume you’re talking about the Destroyers,” Synarius said.

“The Destroyers. Yes, that was it,” Vera said. “The way I hear it, they’ve been targeting the gangleaders and the corrupt aristocrats who work with them. Trying to fight for justice for the lowest tunnelers, to protect them from exploitation.”

Vera made herself swallow hard. “My client only wishes to know whether the Destroyers are really the threat we’ve heard they are. And if they are, we’d like your assurance that they won’t cause any …
problems
for this deal. In fact, my client is rather interested in meeting with one of their representatives.”

Vera took care not to look directly at the second lieutenant, but she watched him from the corner of her eye. Was that a bead of sweat trickling down his temple? A shifting tightness in his jaw? He knew more about the Destroyers than he wanted to admit, she was sure of it. But he wasn’t about to admit it in front of a Stargazers lieutenant.

Because the Destroyers wanted to take down the gangs that kept the tunnelers enslaved, or as good as. And the Stargazers were the cruelest gang of them all.

“The Destroyers never have been and never will be an issue for the Stargazers,” Synarius said thinly. “We do not allow dissent. Our tunnelers know their place. They know that were it not for us, their lives would be even more miserable, with no one to find them work and pay them and keep them from far greater predators within Barstadt’s underground.”

Vera had a hard time imagining any predator worse than the Stargazers, but knew better than to say so. “Then I take it you don’t know who’s in charge of the Destroyers.”

“We’re done here.” Synarius stood up abruptly. “You’ll hear from us, or not. Good evening.”

Vera didn’t even try to conceal her smile as Tyrond ushered her away from the nook.

“Reckless,” the Minister of Affairs, Petran Durst, boomed through his office. “Fantastically reckless, Miss Orban. I expected better from you.”

Vera regarded her boss with only slightly more respect than she’d regarded Synarius. She was a spy for the empire’s Ministry of Affairs, an intelligence service and secret police tasked by the Emperor to disrupt organized crime, corruption, and threats to the empire. But Vera was fairly certain the biggest threat to the empire was often the empire itself—a rigid caste that cleaved between the aristocracy and merchant classes, and the tunnelers who toiled away beneath them. Vera’s family, merchants themselves, had poured untold time and energy toward launching her into the aristocracy through a fortuitous marriage. She’d thanked them by running off to the Ministry, leaving the smoldering wreckage of a fantastic scandal in her wake.