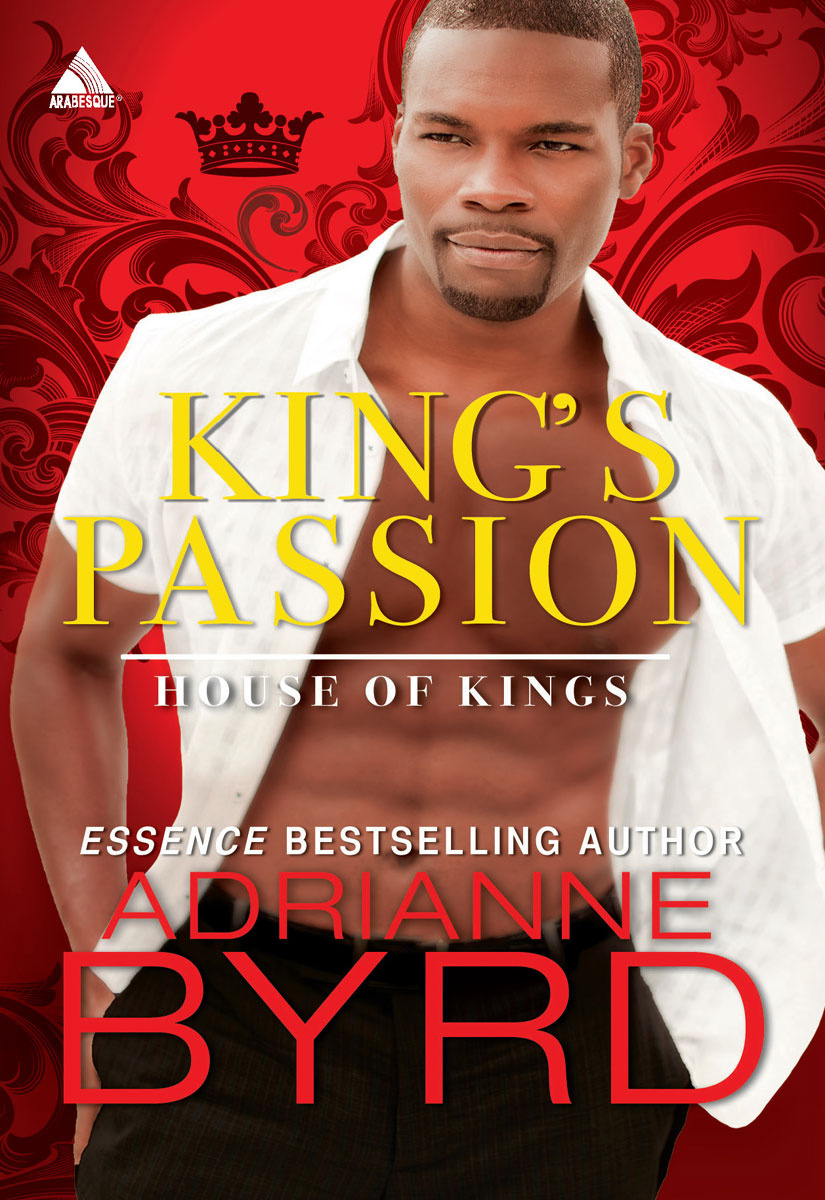 To Alice: Forever my inspiration

To my family and friends, thanks for all the support
and love that you've given me.

To my editor, Evette Porter, for helping me through one crazy year. To my wonderful fans and readers, thank you for allowing me to do what I do. It's always a pleasure to entertain you.

I wish you all the best of love.

The House of Kings series

Many of you have followed the Unforgettable series, which morphed into the Hinton Brothers series. Now I'm introducing you to the Hintons' playboy bachelor cousinsâthe Kings.

Eamon, Xavier and Jeremy along with their infamous cousin Quentin Hinton are business partners in a gentlemen's club franchise called The Doll House. One of their most popular and lucrative specialties is their bachelor party services. And with clubs in Atlanta, Las Vegas and Los Angeles, the brothers are determined to make sure their clients' last night of bachelorhood is one that they'll never forget.

In
King's Passion,
Eamon, the eldest brother, books a high-end client, Marcus Henderson, for an over-the-top, bachelor-party extravaganza. According to the best man, there's to be no expense spared for this wild night. Even Eamon gets caught up in the excitement. But things take a detour when the groom-to-be gets so plastered that he ends up marrying one of the hired strippers. When the dust clears and the alcohol wears off, Eamon has another headache to contend withâthe angry ex-bride-to-be, Victoria Gregory.

Next month, look for the second title in the House of Kings series,
King's Promise,
featuring Eamon's brother Xavier King. And in August, read the final book in the trilogy,
King's Pleasure,
featuring Jeremy King.

Remember, in love, never bet against a King.â¦

Who's Afraid of Victoria Gregory?

Then There Were Three

Q
uentin Dewayne Hinton was at a crossroads. Actually, he'd been there for quite some time. The hard part had been admitting it. Once upon a time, his father had told him that “pride was the bane of all men.” If anyone knew that, it would be his father. Roger Hinton was a proud man who ran his family like a corporation. His God was the Dow Jones, and his heart and soul belonged to the numbers in his bank account.

Chuckling at his analogy, Q climbed out of his black Mercedes and gave the parking deck a casual glance from behind his Oliver Peoples sunglasses. He slid his hand into the pants pocket of his gray, tailored Italian suit while he opened the glass door to the high-rise building with his other hand. Though he was nervous about this meeting, one would never know it by his confident stride through the Peachtree Tower. Inside the massive, ornate lobby, Quentin
kept his focus straight ahead toward the brass elevator doors.

As luck would have it, a very tall and very beautiful woman stepped into the compartment behind him as he pushed the button for the thirty-third floor. As usual, he started his inspection from the feet up. Pretty toes, nice ankles, firm calves. So far, everything had his imaginary dog tail wagging. Amazing legs, slim waistâby the time he made it to the woman's long neck, he was turning toward her ready to spit his best pick-up line.

But then the image of Alyssa Hinton's face smiled.

“You know it never would have worked between us,” she said.

“What?” He blinked and then snatched off his shades.

“Are you okay?” the beautiful woman who was
not
Alyssa asked, frowning at him.

Quentin quickly glanced around the small compartment and saw that they were the only two people in the elevator.

“Sir?” The woman's brows dipped in concern and suspicion. “You look like you just saw a ghost.”

“Iâ¦uh.” He straightened his shoulders and cleared his throat. “I guess I was awed by your beauty.”

The woman's expression clearly reflected that she wasn't buying his answer and she inched closer to the corner of the elevator car.

Q didn't blame her. He rubbed his eyes and slid his sunglasses back on just as the elevator arrived on his floor. He tossed the woman another quick smile but then rushed out of the small compartment.

Pull yourself together, man.

He squared his shoulders again and marched toward
suite thirty-three hundred. Once in the quiet office, he felt another wave of relief to see the lobby was empty.

“May I help you?” the receptionist asked from behind the counter.

The woman looked down and ran her finger over a column of names in her appointment book. “Ah. Here you are. If you can just sign in for me here.” She handed over a clipboard.

Quentin took it and the pen and scrawled his name. When he looked up to hand the clipboard back to the receptionist, Alyssa smiled.

“The doctor will be with you in a second.”

Q blinked and then snatched his shades off again.

The receptionist frowned. “Are you all right?”

You mean other than my seeing things?
“Yes. I'm fine. Thanks.” He quickly turned toward the waiting area and commanded himself to pull it together. He sat down and slipped his sunglasses in the inside breast pocket of his coat jacket. A second later an office door to his right opened.

A tall, older dark-skinned brother in an Armani suit crossed the threshold while still shaking hands with an attractive, red-bone sister who was needlessly hiding her curves in a black, shapeless skirt-suit.

“Thank you, doctor,” Mr. Armani said, cheesing at her as he released her hand.

“Yes.” He stood up, feeling his nerves twist.

“Hello. I'm Dr. Julianne Turner. Won't you come in and have a seat?”

Q forced a smile and strolled into the office. He hesitated for a second before he took his seat in the chair in the psychiatrist's office. He shifted a bit, trying to make himself comfortable, but that wasn't possible on the first visit.

“You look uneasy,” the doctor said, removing her golden pen from her breast-pocket.

“Uh-huh.” Dr. Turner clicked the back of the pen and started writing.

Q frowned. What the hell had he done to warrant her writing something down already? He leaned forward to read her handwriting on the yellow tablet, but before he could make out the words, the doctor looked up with a knowing smile.

“So what brings you here todayâ¦do you mind if I call you Quentin?” she asked.

“No. Please do.” This should've been the one question that Quentin was prepared for. But instead his brain zoned out, leaving him staring at the doctor as if he was waiting for an answer.

“Please don't tell her that you think you're still in love with me,” Alyssa said from across the room. She was wearing those wonderful tight blue jeans and the white top that she'd worn the day they had gone horseback riding together and the first time he'd kissed her under an oak tree.

He paused for a couple more seconds and then said, “Love.”

Across the room, Alyssa groaned.

“Are you in love, Quentin?”

Q's head turned toward Alyssa, but she was gone. “I thought I was.”

He faced her again. “Let's just say that I don't understand love. How it magically appears, puts you in a spell and then
poof!
After that, you question whether it was ever there at all.” Sensing that he wasn't making any sense, Q cleared his throat. “Maybe I should lie down.”

“If you like,” Dr. Turner said as she scribbled away on her notepad.

Q assumed the position on the doctor's leather chaise and leaned back on the arm. “You know, my brothers have been telling me for years that I needed to see a shrink.”

“Are you here at their urging?”

“So you wanted to come?”

Scribbling. “And why is that?”

Quentin lowered his gaze from the ceiling to stare at the floor-to-ceiling glass window to see an image of Alyssa in her white wedding gown, checking out her reflection. “I'm afraid that I missed my one chance.”

Alyssa spun around and shook her head at Quentin. “You don't love me.”

“Yes,” he said simply. “The woman I thought was for me married my brother two years ago. I went to the wedding, stood in line with the other groomsmen and watched
Sterling marry the woman of my dreamsâthen I left and haven't seen them since.”

“So you're estranged from your brother?”

“With Sterlingâyes.” Q shrugged. “I still talk to my other brother Jonas from time to time. But it's not the same. He's happily married with children andâ¦everything has changed. Everyone has changed. Everyone is falling in love,” Q chuckled. “Who knows, maybe something
is
wrong with me.”

“You don't really believe that, do you?” she asked.

Alyssa shook her head at him.

“I don't know what I believe. Once I lost Alyssa, I swore off love and renewed my vow to be a bachelor for life. And why not? There are more than enough women out there who'd love the pleasure of my company. You know what I mean?” He turned his head and caught a glimpse of the doctor's long legs.
Nice.

“Sorry.” Quentin smiled and turned back around.

“Anyway,” Q said, “like I was saying, bachelorhood is for me. So I figured that birds of feather flock together, right?”

Scribbling. “You tell me.”

“It beats talking to a woman that's not really here,” Alyssa said, twirling around in her dress.

Quentin rolled his eyes but had to concede her point. “Well, I considered my business partners and cousins Xavier, Jeremy and Eamon a part of my flock. Well, maybe not Eamon so muchâbut definitely Xavier and Jeremy. They all loved women as much as I did. None of them wanted to settle down with just one, which actually made them the perfect partners in The Dollhouse.”

“Only the hottest gentlemen's clubs in the country, of course I'm a little biased.” A smile eased across Quentin's face as his chest expanded with pride. “We're in Atlanta, Las Vegas and Los Angeles. But the
big
moneymaker is our side business called Bachelor Adventuresâwhere we host the wildest bachelor parties ever. The women have their day, the men have their night. You know what I mean?”

Scribbling.
“So you and your cousins provide a service for men to enjoy their last night of bachelorhood?”

“That was the plan.”

Q drew a deep breath. “Until love showed up. What else? Then they started to fall one by one. Take Eamon for exampleâ¦”