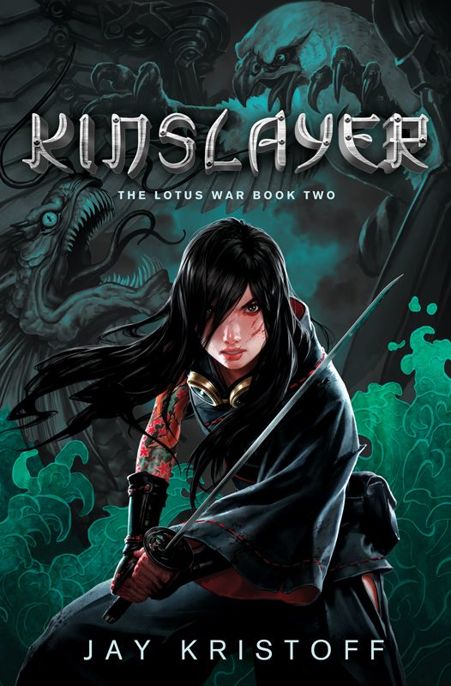 For Kath and Tony.

Your anger is a gift.

WHO THE HELLS ARE ALL THESE PEOPLE?

Yukiko
—A young girl with the ability to speak telepathically to animals (a gift called “the Kenning”). Commanded to capture a legendary thunder tiger by Shima’s cruel Shōgun, Yukiko ended up forging a powerful bond with the beast, whom she named Buruu. While lost in the wilderness, she joined the ranks of a guerrilla rebellion, known as the Kagé (meaning “Shadows”), and decided to take retribution on the Shōgun for his crimes against her family.

Last known whereabouts: after murdering Shōgun Yoritomo, Yukiko fled Kigen city. She returned forty-nine days later and delivered an impassioned speech, urging the populace to rise against the government and the Lotus Guild.

Buruu
—A thunder tiger (aka arashitora). Yukiko’s best friend and loyal companion. Buruu is the last of his race in Shima. His feathers were clipped by Shōgun Yoritomo, and until he molts again, he cannot fly without the aid of mechanical wings built for him by the Guild Artificer, Kin.

Kin
—An Artificer (engineer) of the Lotus Guild who crashed with Yukiko in the Iishi Mountains. In defiance of all he had been raised to believe, Kin built mechanical wings for Buruu, allowing the thunder tiger and Yukiko to escape the Shōgun’s clutches.

Masaru
—aka “The Black Fox of Shima.” Hunt Master of the Imperial Court. Yukiko’s father. Drunkard. Gambler. Lotus-addict. But he turned out to be a decent fellow, underneath it all.

Last known whereabouts: Masaru was shot and killed by Yoritomo-no-miya during a showdown in Kigen’s Market Square.

Last known whereabouts: Kasumi was killed during Masaru’s jailbreak. She died in his arms.

Akihito
—A hunter of the Imperial Court. Masaru’s right-hand man, and Yukiko’s friend since childhood. His leg was badly wounded during Masaru’s jailbreak.

Last known whereabouts: limping to Kigen docks with Michi in order to flee the city after the Shōgun’s assassination.

Yoritomo-no-miya
—Shōgun of Shima. Daimyo of the Tiger clan. Last son of the Kazumitsu Dynasty, a familial line that has ruled the Shima Imperium for two centuries. A lunatic who came too young to power, and was ultimately consumed by it.

Last known whereabouts: Yoritomo was slain telepathically by Yukiko and Masaru during their showdown in the Market Square.

Aisha
—Yoritomo’s sister. Last daughter of the Kazumitsu Dynasty. Secret ally of the Kagé rebellion (a fact discovered by Yoritomo before his death).

Last known whereabouts: Yoritomo alluded to a grim fate for his beloved sibling, but whether Aisha survived his retribution remains unknown.

Michi
—A maidservant of the Lady Aisha. Secret member of the Kagé rebellion. Swordmaster.

Last known whereabouts: making her way to Kigen docks with Akihito in order to flee the city after the Shōgun’s assassination.

Hiro
—aka “The Boy with the Sea-Green Eyes.” Iron Samurai. Member of the Kazumitsu Elite (the Shōgun’s personal bodyguard). Hiro formed a romantic relationship with Yukiko while she was resident in the Shōgun’s palace, but ultimately betrayed her when he discovered she was plotting against his lord and master, Yoritomo.

Last known whereabouts: during a bloody battle in Kigen arena, Buruu tore Hiro’s arm off and Yukiko stabbed him in the chest. He was left for dead on the arena floor.

Daichi
—Leader of the Kagé rebellion. A former member of the Kazumitsu Elite who rebelled against the Shōgunate after Yoritomo mutilated his daughter, Kaori. While in Yoritomo’s service, Daichi murdered Yukiko’s mother—a warning to Masaru when he refused to obey the Shōgun’s will.

Kaori
—Lieutenant of the Kagé rebellion. Daichi’s daughter. She bears an awful knife scar on her face, courtesy of Yoritomo-no-miya.

Kensai—
Second Bloom of the Lotus Guild, and Voice of the Guild in Kigen city. One of the most powerful and influential Guildsmen alive. Kin’s adoptive uncle.

Isao
—A young member of the Kagé rebellion. He spied on Yukiko while bathing, discovering she bore the tattoo of the Shōgun on her arm.

Atsushi
—A young member of the Kagé rebellion. Isao’s partner in crime during the “Affair of the Bathhouse Wall.”

1. The Girl All Guildsmen Fear

3. The First and Only Reason

15. The Hour of the Phoenix

26. Footprints in the Snow

33. Between Bending and Breaking

35. Children of the Grave

40. Fodder for the Judge

“The prelude was Void,

And unto Void they return. Black as mother’s womb.”

So spoke he the first; holy Lord Izanagi, Maker and Father,

Unto the second; great Lady Izanami, Mother of All Things,

Not his to foresee, the doom of all mortal men,

Would also be hers.

—
from the
Book of Ten Thousand Days

Now witness the end of the beginning.

A ghost-pale girl, sixteen years old, wisps of dark hair and warm scarlet scrawled across her face. A smiling tyrant, stained with his own sister’s blood, a smoking iron-thrower in a white-knuckle grip. The pair standing in the crowded Market Square as children’s ashes swirl and dance in the gulf between them. And she stretches out her hand, and opens her mouth, and speaks the last words the tyrant will ever hear.

“Let me show you what one little girl can do.”

Fifty-five days ago. Almost two months since the last son of the Kazumitsu Dynasty perished at her hands. So much chaos since then. The earth shifting beneath our feet. The threads beginning to unravel. One by one by one.

Our war of conquest against the round-eyed gaijin collapsed as news of the Shōgun’s death spread, the threat and promise of a now-empty throne coalescing in every clanlord’s mind. And as the shadow of civil war reared over the Seven Isles, the Lotus Guild urged only calm. Obeisance to their puppets in the Tiger clan. Threatening embargoes of their precious fuel—the blood-red chi driving the Shōgunate’s iron heart—to any who disobeyed their will.

Then came the truth of how that fuel was made.

The words that would begin the avalanche were transmitted over the pirate radio frequencies of the Kagé rebels. The Shadows revealed that inochi—the wondrous fertilizer used on blood lotus fields across the Seven Isles—had been manufactured with the remains of gaijin prisoners of war. And Shima’s people awoke to the horror that the Imperium, the technology driving it, their entire way of life—all had been watered with innocent blood.

Zombie Fight Night: Battles of the Dead by A. P. Fuchs
Handle with Care by Porterfield, Emily
Dead Spy Running by Jon Stock
Solitaire Spirit: Three Times Around the World Single-Handed by Les Powles
Green Girl by Sara Seale
Between Two Worlds by Katherine Kirkpatrick
1 The Bank of the River by Michael Richan
Dear Carolina by Kristy W Harvey
Raw Silk by Delilah Devlin
A Fish in the Water: A Memoir by Mario Vargas Llosa