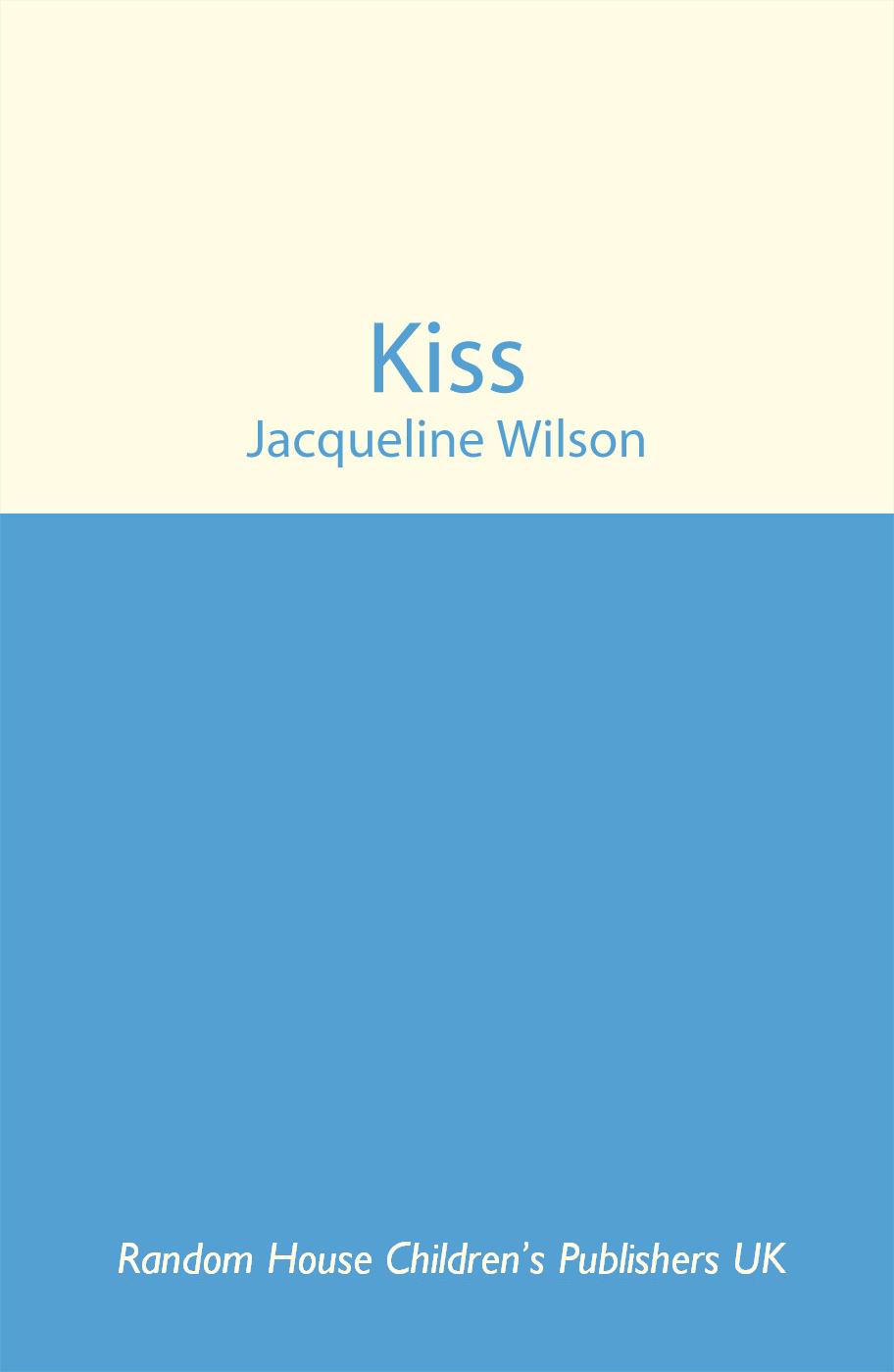 Sylvie and Carl have been friends since they were tiny. They’ve always played together and called each other boyfriend and girlfriend. They even have a magical fantasy world that belongs to them alone.

But as they become teenagers, things begin to change. Carl has a new friend, Paul, who is taking all his attention. Sylvie can tell his feelings have changed. But can she guess at the true reasons behind it all?

A moving and delicately handled treatment of first love and first heartbreak from the best-selling, award-winning Jacqueline Wilson. 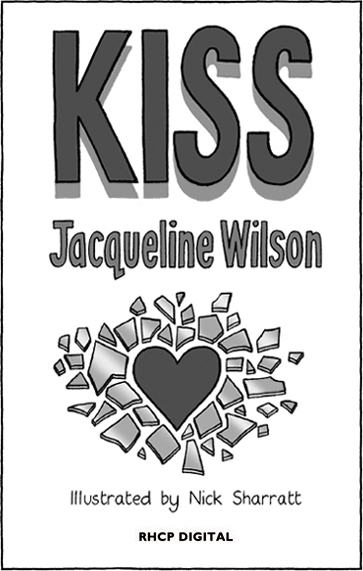 I HATED LUNCH
times. I always missed Carl so much.

When we were in middle school we spent all our time together. We’d rush off the moment the bell went, shovel down our school dinners in ten minutes flat, and then we’d have a whole hour just being
us
. We’d sneak off to one of our special favourite places. When it was sunny we’d sprawl by the sandpit or sit kicking our legs on the wall near the bike sheds. We’d lurk in the library most of the winter. It didn’t really matter where we were, just so long as we were together.

Some days we didn’t talk much; we just read our books, chuckling or commenting every now and then. Sometimes we drew together or played silly paper games. But
most
days we’d invent another episode of Glassworld. We’d act
it out, though we couldn’t do it properly at school the way we could inside the Glass Hut. The other kids thought us weird enough as it was. If they came across us declaring undying love as King Carlo and Queen Sylviana they’d fall about laughing. We’d mutter under our breath and make minute gestures and the magic would start working and we’d be whirled off to the glitter of Glassworld.

It was always a shock when the bell rang for afternoon school, shattering our crystal crowns and glass boots. We trudged back along the pizza-smelling corridors in our shabby trainers, wishing we could stay in Glassworld for ever.

I still kept the Glassworld Chronicles up to date in our huge manuscript book, and Carl occasionally added notes or an illustration, but we didn’t often act it out nowadays. Carl always had so much boring homework. Sometimes he didn’t come to the Glass Hut for days and I’d have to go calling for him.

It didn’t always work then. He’d follow me down through the garden and sit in the hut with me, but he’d be all quiet and moody and not contribute anything, or he’d be silly and mess around and say his speeches in stupid voices, sending it all up. I could generally get him to play properly eventually, but it was very hard work.

‘Maybe you shouldn’t keep pestering Carl to play with you,’ said Mum.

‘But he’s my best friend in all the world.
We always play together,’ I said.

‘Oh, Sylvie,’ said Mum. She sighed. Nowadays she often sighed when she talked to me. ‘You’re too old for this playing lark now, making up all these secret imaginary games. It’s not normal. You’re thirteen, for God’s sake. When are you going to start acting like a teenager?’

‘You don’t know anything about it,’ I said loftily. ‘They’re not little kids’ games. We’re writing our own series of books. You wait. They’ll be published one day and Carl and I will make millions, what with all the royalties and the foreign rights and the film deals.’

‘Oh well, you can maybe pay off the mortgage then,’ said Mum. She sighed again. ‘Who do you think you are, eh? J. K. Rowling? Anyway, Carl doesn’t seem quite so keen on this playing – sorry,
writing
lark nowadays. You’re both growing up. Maybe it’s time to make a few new friends. Isn’t there anyone you can make friends with at school?’

That was true enough. Lucy and I had made friends that worrying first day in Milstead High School. I’d known her in first school and middle school, but I hadn’t ever needed to make a proper best friend of any of the girls because I’d always had Carl.

It was hard trying to make friends now in Year Nine. Nearly everyone had been at our middle school so they just carried on in the
same twosomes or little gangs. There were several new girls in our form, but they palled up together. There was also Miranda Holbein in the other Year Nine form, but she was way out of my league.

It was a great relief when Lucy asked if I’d sit next to her and acted friendly. She was a giggly girl with very pink cheeks, as if she was permanently embarrassed. She sang in the choir and was always very
good
. She had pageboy hair and always had a shining white school shirt and never hitched up her knee-length skirt and wore polished brown lace-up shoes. She looked almost as babyish as I did. So we sat next to each other in every lesson and shared chocolates and crisps at break. We chatted about ordinary humdrum things like television programmes (she liked anything to do with hospitals and wanted to be a nurse when she grew up) and pop stars (she loved several members of boy bands in a devoted little-sisterly fashion, knowing off by heart their birth signs and favourite food and every single number one on their albums, in order).

Lucy was fine for an everyday friend. I would never ever count her as my
best
friend, of course. She lived just round the corner from school so she went home at lunch time. I lived too far away. Anyway, my mum was busy working at the building society, not home to cook me egg and chips like Lucy’s mum. I was stuck for company each lunch time. We weren’t
allowed mobile phones at school but I mentally sent Carl text messages:
I MISS U. TALK
2
ME. C U IN G H
2
NITE
?

We used to pretend we were so in tune with each other we were telepathic. Maybe our psychic brainwaves weren’t wired up for new technology. Nothing went
ching-ching
in Carl’s head. If he ever tried to send me similar messages I didn’t pick them up, though I waited tensely enough, eager and alert.

I asked Carl over and over what he did during his lunch times at Kingsmere Grammar but he was unusually uncommunicative. He ate. He read.

‘OK. You want me to describe my visit to the boys’ toilet in elaborate detail?’

‘Maybe you’d like to follow me around with a webcam,’ said Carl. He suddenly grinned, and switched to manic TV-presenter mode. ‘
Here is our unwitting suspect, Carl Johnson. Let’s hone in on him. Ah! What is he up to now? He’s lifting a finger. Has he spotted us? Is he about to remonstrate? No, he’s picking his nose. Let’s have a close-up of the bogey, guys
.’

‘
Oh, Carl’s close friend Sylvie is making a pithy comment. Let’s focus on little Sylvie. Smile
at the camera, babe
,’ he said, sticking his squared fingers right in front of my face.

I stuck my tongue out.

‘
Keep it out, keep it out, that’s the girl! We’re now switching to our all-time favourite Live Op Channel. Ms Sylvie West has suffered all her childhood from Sharp Tongue Syndrome but the eminent ear, nose and throat specialist, Mr Carl Johnson, is about to operate. Scissors please, nurse!
’

‘
Yes, here are the scissors
,’ I said, snip-snapping my fingers. ‘
But we’ve switched to the Mystery Channel now and I’m playing a scary girl driven bonkers by her mad best friend so she decides to – stab – him – to – death!
’

I made my scissor fingers strike Carl’s chest while he shrieked and staggered and fell flat at my feet, miming a bloody death. He did it so well that I could almost
see
a pool of scarlet blood.

I bent over him. He lay very still, eyes half open but staring past me, unblinking.

‘Carl? Carl!’ I said, giving his shoulder a little shake.

He didn’t stir. My heart started beating faster. I crept closer, hanging my head down until my long hair tickled his cheeks. He didn’t flinch. I listened. He didn’t seem to be breathing.

‘Stop it, Carl, you’re frightening me!’ I said.

He suddenly sat bolt upright so that our heads bumped together. I screamed.

‘
Ah, I’m glad I’m frightening you because
we’ve switched to the Horror Channel now and I am a ghost come back to haunt you. Be very afraid, Sylvie West, because I am going to
get
you!
’

His hands clutched my neck but I wrestled with him. I was small and skinny but I could fight like a wildcat when I wanted. We tussled a bit but then Carl’s fingers started tickling my neck. I creased up laughing and then tickled him in turn. We lay flat on our backs for a long time, giggling feebly. Then Carl reached out and held my hand in the special best-friendship clasp we’d invented way back when we were seven. I held his hand tight and knew that we were best friends for ever. More than best friends. We’d played weddings together when we were little. Carl used to make me rings out of sweet wrappers. Maybe he’d give me a real ring one day.

How could I ever compare my bland little conversations with Lucy to the glorious fun I always had with Carl?

There weren’t really any other girls to go round with at lunch time. I got on with nearly everyone, but I didn’t want to foist myself upon them. One time when I was sitting in the library Miranda Holbein sauntered in and waved her fingers at me. I was so startled I looked round, convinced she must be waving to someone behind me.

I waggled my fingers back foolishly and then gathered up my books and rushed for the door. I
didn’t want to annoy Miranda. We’d only been at the school a few weeks but she already had a serious reputation. She could make mincemeat of you if she didn’t like your looks.

I
didn’t like my looks. I was so tiny people couldn’t believe I was in Year Nine at high school. I looked the youngest of all the girls in my class. They all called me Little Titch. I didn’t exactly get teased. I was looked on as the class mascot – quite cute, but not to be taken seriously.

Everyone was in total awe of Miranda. She looked much older than me, much older than any of us. She seemed at least sixteen, even in her bottle-green school uniform. She had bright magenta-red hair, obviously dyed, though this was strictly against school rules. She cheerily lied to Miss Michaels, swearing that every startling strand of hair was natural. It swung down past her pointed chin but she often plaited it in little rows, fastening each end with tiny beads and ribbons.