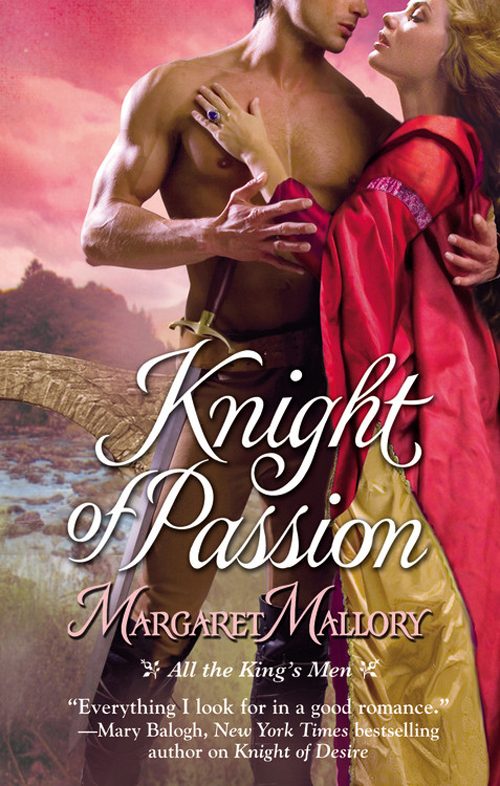 “So we shall work together?” Linnet asked.

“Aye, I am all for joining forces,” Jamie said, still hoping this would include more tonight than scheming on the queen’s
behalf. Tomorrow he would worry about the consequences.

Her eyes grew wide as he closed the distance between them to stand a hairbreadth from her. As he lifted his hand to cup her
cheek, she backed away.

“I told you once,” she said, her voice sharp with anger. “I will not have you touch me and regret it after.” When he opened
his mouth to deny it, she held up her hand. “I will choose a lover who is not so harsh in his judgment of me.”

He clenched his jaw at the thought of her with another man. “So, it is a lover you are seeking again, and not a husband,”
he bit out. “Tell me, what are you looking for in the man you choose this time?”

She raised her eyebrows and blinked those wide, innocent blue eyes at him. “Who is to say I expect to find all I want in one
man?”

“4 Stars! A riveting story… Such depth and sensuality are a rare treat.”

“Fascinating… An excellent historical romance. Ms. Mallory gives us amazingly vivid details of the characters, romance, and
intrigue of England. You’re not just reading a novel, you are stepping into the story and feeling all the emotions of each
character…
Knight of Pleasure
is amazing and I highly recommend it.”

“An absolute delight… captivating… Combining a luscious romantic story with a fascinating look at an intriguing time in history,
Mallory captures her readers’ attention… I look forward to the next book in the series, KNIGHT OF PASSION.”

“If you like heated romance sprinkled liberally with royal politics, you can’t miss this book.”

“A beautifully written tale, allowing us to spend a night or two of pleasure engrossed in the story of Isobel and Stephen…
Their romance is extremely satisfying for us to experience while the historical background makes the tale so much richer.
A fantastic job.”

“Isobel almost jumps from the page as a fully developed character whose strengths and weaknesses make her seem extraordinarily
real. Readers will rally behind her.”

“Lovely… your own heart weeps with all the issues that are keeping [Isobel and Stephen] apart.”

“Mallory opens readers’ eyes to the world of King Henry V… detail-enriched… bringing alive historical facts and surroundings…
I thoroughly enjoyed reading the fascinating and scintillating exchanges between Isobel and Stephen and watching as both characters
grew in both love and maturity.”

“An impressive debut… Margaret Mallory is a star in the making.”

“5 Stars! Amazing… The fifteenth century came alive… I swear the turning pages crackled with the friction both characters
put out…
Knight of Desire
is the first in the All the King’s Men series and what a way to start it off.”

“A fast-paced tale of romance and intrigue that will sweep you along and have you rooting for William and his fair Catherine
to fight their way to love at last.”

“4 Stars! Mallory’s debut is impressive. She breathes life into major historical characters… in a dramatic romance.”

“A lavish historical romance, evocative and emotionally rich.
Knight of Desire
will transport you.”

“4 Hearts! A breath of fresh air… a fascinating tale, mixing emotionally complex characters with a captivating plot… I really
enjoyed following William and Catherine as they explored their growing feelings for each other.”

“
Knight of Desire
is akin to stepping into another century; Mallory has a grasp of history reminiscent of reading the great Roberta Gellis.”

“Stunning! Margaret Mallory writes with a freshness that dazzles.”

“An amazing debut… I’m looking forward to the next installment of this series.”

“Medieval romance has a refreshing new voice in Margaret Mallory!”

“Mallory spins a masterful tale, blending history and passion into a sensuous delight.”

“The story sizzles with romance and adventure.”

Excerpt from
Knight of Desire
copyright © 2009 by Peggy L. Brown All rights reserved. Except as permitted under the U.S. Copyright Act of 1976, no part of this publication may be reproduced, distributed, or transmitted in any form or by any means, or stored in a database or retrieval system, without the prior written permission of the publisher.

Forever is an imprint of Grand Central Publishing. The Forever name and logo is a trademark of Hachette Book Group, Inc.

This book is dedicated to my children, Emily and Jeff, who are the joy of my life and make me proud every day.

“So we shall work together?” Linnet asked.

A Preview of
Knight of Desire

I am grateful to everyone at Grand Central Publishing for their support, especially my insightful editor, Alex Logan. It’s
lucky for us both that she has a sense of humor. Special thanks also goes to Claire Brown for another gorgeous cover. As always,
I want to thank my agent and friend, Kevan Lyon, for her sage advice and constant support.

A big thank-you goes to my friends and sister—Anthea, Ginny, Jessica, and Cathy—whose comments on the draft manuscript saved
my editor much needless suffering. I am in awe of the generosity of other romance writers and am very grateful for it.

I appreciate every single person who e-mailed to tell me they loved one of my books. You make the months alone with my laptop
worthwhile.

Thanks to all the friends and family who have thrown themselves into supporting the only author they know. My biggest thanks
goes to my husband, who helped me through an incredibly busy year.

“Were I a man, a duke, and next of blood, I would remove these tedious stumbling-blocks And smooth my way upon their headless necks…”

“W
hat if we get caught?” Jamie said, glancing up and down the palace corridor.

Getting caught was precisely the point, but Linnet was not going to tell Jamie that. She looked up at him through her lashes and said, “Don’t you want to?”

The way his eyes went dark made her breath catch.

“You know I do,” he said, brushing the back of his fingers against her cheek.

Her skin tingled from his touch. If she did not take care, Jamie could make her forget her purpose.

She felt a twinge of guilt for not telling him. None of the other young men at court would care what her reasons were if she
dragged one of them into an empty bedchamber. But Jamie would refuse her if he knew. That stubborn sense of honor—misplaced
though it may be—was one of the things she liked best about him.

“Everyone is attending the celebrations,” she assured him.

The feasting that began with King Henry’s triumphal entry into Paris with his French princess was continuing without pause
through Advent.

“But the guest who has this chamber could return at any time,” Jamie said.

He sucked in his breath as she ran a finger down his chest.

“If you are going to be a frightened mouse,” she said, “I can find someone else.”

Jamie’s boyish sweetness was gone. He gripped her arm and jerked open the bedchamber door. Before she knew it, she was inside
the bedchamber with her back pressed against the door. Jamie kissed her long and hard.

“You are the only one I want.” This was the truth, but she regretted telling him. He would read more into it than he ought.

“ ’Tis the same for me,” he whispered and rested his forehead against hers.

She closed her eyes and breathed in his scent as she leaned against him. He could be such a tender boy.

But she did not know how much time she had. “Now,” she whispered in his ear. “I want to do it now.”

When she rubbed her hand up his cock for good measure, he made a sound between a growl and a moan and lifted her from the
ground. Men were so predictable, so easily managed, there was almost no challenge in it. Still, Jamie’s reaction was gratifying.

As he carried her to the bed, Linnet gave herself a moment to savor the thought of how angry Alain, her “father,” was going
to be. That man would rue the day.

From the moment Jamie laid her down and started kissing her, she forgot about Alain and her plans for revenge. This part she
could not control, did not even try. A fire had raged between them since the day he arrived in Paris with the king. No matter
how often they sneaked away to be together, the fire only burned hotter. She gave into it with abandon now, as she did every
time.

The Revenant by Sonia Gensler
Valiant Soldier, Beautiful Enemy by Diane Gaston
The Year My Mother Came Back by Alice Eve Cohen
Prisoner of the State: The Secret Journal of Premier Zhao Ziyang by Adi Ignatius
For Want of a Nail by Mary Robinette Kowal
The Breadth of Heaven by Rosemary Pollock
The Rivers of Zadaa by D.J. MacHale
Raven and the Cowboy: A Loveswept Historical Romance by Sandra Chastain
The Pleasure of Memory by Welcome Cole
Raintree County by Ross Lockridge