Read Knowing Me Knowing You Online

Knowing Me Knowing You 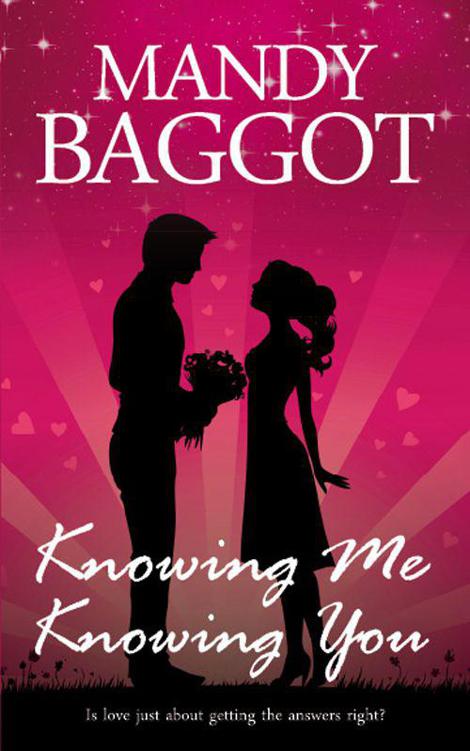 Mandy lives in leafy Wiltshire and has Sting as a neighbour. She lives with her husband, two daughters and two cats (
Kravitz
and Springsteen). When she isn’t writing she loves to sing and do Lady Gaga impressions (check out You Tube). She will soon be working on her fifth novel – if she can stay off Twitter for long enough.

I've just read your book and thought it was excellent!

It
had
a real ‘feel good’ factor about it. (Excess All Areas)

I was entertained by the book from beginning to end and when I finished reading it, I felt the same satisfied feeling I have after watching a good film. (Breaking the Ice)

The book takes a thorough look at relationships, love, commitment and honesty and all the complicated baggage that comes with the territory. It is chick-lit to its fingertips! (Knowing Me Knowing You)

Bird
poo
and porridge
were
basically one and the same bloody thing as far as Kate was concerned. Well, at least they were when it came to stains. No matter how much you scrubbed, no matter what product you used, you were always left with a white residue that stood out a mile.

A pigeon had shit on her in the car park, all over the shoulder of her one decent work jacket. Old style M&S she had picked up at a charity shop but still in good condition. That meant the first four chargeable units of the morning had been spent trying to get the mark off. And it was, as always, to no avail. You could still see it and now it didn’t look like bird shit, it looked like a semen stain.

It was 2.00pm now and she had just noticed another mark on her sleeve. This one was definitely porridge unless a bird had got very intimate without her knowledge
.
J
udging by the hard, crusted, almost concrete look about it, it had possibly been there for weeks. She hadn’t had a chance to get to the dry cleaners in ages. Giuseppe gave her a good discount and his mother’s special recipes for everything Italian, pasta and tomato based, but dry cleaning was still
something
she considered a luxury. And
,
every time Kate went in to Giuseppe’s she suspected he knew she hadn’t tried any of the recipes because she couldn’t cook and she was sure he could smell that.

The M&S jacket was one of those wool mix ones that you couldn’t just put in the washing machine, which was probably why it had ended up in Marie Curie. The last time she had risked the washing machine with a jacket like that
,
it had shrunk to something not even a size
six
model could force
herself
into.

She hurriedly slipped it off her shoulders, ripped a paper towel from the wall and wet it under the tap. For the second time that day she began dabbing and scrubbing and cursing under her breath, getting hotter and more frustrated by the second. It wasn’t shifting; the paper towel was disintegrating until the only things rubbing the stain were her fingers. Tears began to well up in her eyes. She had spilt coffee on her desk this morning and had to share the lift
with Smelly Milo from the post-
room, the Ready
Brek
was the last straw. It felt like her world was ending. This couldn’t be how
it was going to be from now on.
She didn’t want to feel tired all the time, inadequate all the time and she didn’t want to be sorting out soiled clothes all the time, especially her own. What was next?
Incontinence and the nursing home?
S
he was only just past thirty.

She was just about to give in to the emotion threatening to spill out when the door to the toilets swung open with a bang and in walked her boss, Miranda Marsh.

Blonde hair swishing, a reek of designer fragrance, and the familiar tip tap of her Jimmy
Choo's
introduced her
. Now was no time for losing control. A stiff upper lip was required and more restraint than a stag party in a lap dancing bar.

‘
Oh there you are Kate,
’
Miranda remarked, standing uncomfortably close to her as only she could.

She was wearing a Jigsaw suit that fitted like a glove. No charity shop cast offs for her, she was a Per
Una
woman if ever there was one. Miranda was a size
eight
, petite, always smart, always organised, completely bloody annoying and unstained.

‘
Yes, here I am. Sorry, is Mr Coombs here already? I was just coming,
’
Kate spoke hurriedly, putting her jacket back on and crossing the damp sleeve behind her, out of sight.

‘
No he isn’t. He’s cancelled again! Silly bloody little man, that’s the third time. And this time he didn’t
bother to make up a plausible excuse, just muttered something about his granddaughter needing his professional opinion on buying an MG,
’
Miranda replied with a sigh, turning away from Kate and checking out her reflection in the mirror.

‘
Oh that’s a shame,
’
Kate remarked not meaning it at all.

She had a tonne of work on her desk already; she could do without meetings with clients until she had broken the back of it.

‘
He’s a time waster anyway that man. Too much money, not enough to keep him occupied in his retirement. I really don’t know why we bother a
cting for him.
A
change to his Will here, a bit of
conveyancing
there and that ridiculous trust fund he insisted on setting up. It isn’t going to make us millionaires is it?
’
Miranda continued, putting her hands in her long, blonde hair and preening it.

Kate didn’t respond. She knew that the ‘us’ didn’t really include her; it meant Randall
’
s
,
the firm of solicitors they both worked for. Kate was a legal executive and Miranda was a solicitor. There wasn’t much difference in their legal knowledge and ability, but being a solicitor and the head of the department meant Miranda had her eyes on the prize that was partnership.

Kate on the other hand didn’t really know what she was doing practising law. It had been a choice between that and engineering, according to a very dodgy questionnaire she had gone through with her school careers adviser many years ago. There had been nothing else she had a yearning for. So she got on the study treadmill, looked at all the right books, attended all the necessary courses and passed all the exams for the heart
-
flipping excitement of drafting wills and dealing with dead people. Still, the pay was reasonable and she got the occasional bag of home
-
grown marrows from Mr Jarvis
who seemed to change his Will
as
often
as
he changed his fertiliser.

‘
You haven’t forgotten Friday have you Kate?
’
Miranda said in a way that was more of a statement than a question.

Kate watched her; she was still looking at herself in the mirror and pouting her lips at herself. She looked like someone with a horrendous facial tic.

She knew exactly what Miranda was going to say next and she was desperately trying to sound like she didn’t for lots of reasons.

‘
Yes, the dinner at the Grand,
Peterson Finance
,
’
Miranda reminded.

‘
Good! Perfect! I knew you wouldn’t! I have finally found
the
dress after weeks of searching and I can’t wait to wear it. It’s just like the one Kate
Winslet
wore to the Oscars, you know the one don’t you?
’
Miranda spoke with a wide, red lipstick smile
turning
her attention back to Kate and finally away from the mirror.

She didn’t have
a clue what Kate
Winslet
had worn to the Oscars on any year she had attended and
she didn’t really care
that much either. The Oscars had no place in her life at the moment and in fact never had. The only Oscar she knew of was a woolly
-
faced owl in one of
Bethan’s
story books.

Kate smiled at Miranda and tried to ignore the extremely uncomfortable feeling that was creeping over her at the thought of a large social engagement she didn’t want to attend. She hadn’t been out much lately, a couple of dinners with some of her childminder Hermione’s
friends from the Medieval Fair Society and a pizza and vodka night with her secretary Lynn and some of the other very young secretaries who seemed to be able to drink their own body weight in shots.

To Asmara by Thomas Keneally
Sins of the Fathers by James Craig
The Harvesting by Melanie Karsak
Ghost River by Tony Birch
Catering to the Italian Playboy by Tamelia Tumlin
The Folly by Ivan Vladislavic
Love in Retrograde by Charlie Cochet
The Sheikh's Pregnant Bride (The Jawhara Sheikhs Series Book 1) by Leslie North
Paladin Prophecy 2: Alliance by Mark Frost
The Wives of Bath by Susan Swan