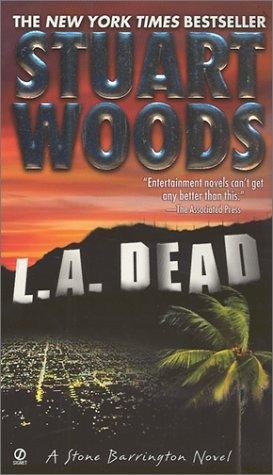 “Alive with action and humor … so delightfully, typically Woods, it will send his fans into paroxysms of joy… . Entertainment novels can’t get any better than this.”

“One of the smoothest writers in the pop-literature biz and always a pleasure to read… . A stylish whodunit.”

Praise for Stuart Woods and His Bestselling Novels

“Keeps you turning page after page.”

“Blackmail, murder, suspense, love—what else could you want in a book?”

“Another gem… . A book to read and get chills from on even the hottest day.”

This book is for Barbara Danielson and Lewis Moore.

“So, what’s happening here? You two look like you’re going to start shooting any minute.”

“Congratulations,” Elaine said. “Anybody you know?”

“It would be, if it weren’t so insane,” Dino added.

“You and Dolce are really going to do this?” Elaine asked, incredulous.

“He won’t listen to me,” Dino said. “I’ve been telling him for a year to stay away from her.”

“What’ve you got against your sister-in-law?” Elaine asked him.

“First of all, she’s my sister-in-law,” Dino replied. “Second, she’s evil. Her old man is the devil, and Dolce is his handmaiden.”

“Don’t start that again, Dino,” Stone said. “I don’t want to hear it anymore. We’re in love, we’re getting married, and that’s it. What’s wrong with that?”

Elaine shrugged. “You’re still in love with Arrington,” she said. “Everybody knows that.”

“What do you mean, ‘everybody’?” Stone demanded.

“Me and Dino,” Elaine replied.

“She’s married; she has a child,” Stone said.

“So?” Elaine queried. “So, she’s married to a movie star; nobody ever took a girl away from a movie star? Happens all the time.”

“I’m not breaking up anybody’s marriage,” Stone said, “and Arrington knows it. I’ve told her so. Anyway, there’s the boy.”

“Wouldn’t be the first kid raised by a stepfather,” Elaine said.

“Dino, I told you, the blood test was done; I saw the lab report. The boy is Vance Calder’s, and that’s all there is to it. I’m not taking a kid away from his father. Besides, I like Vance.”

“What’s not to like?” Elaine asked. “He’s handsome; he’s the biggest star in Hollywood; he’s the most charming man I ever met.” She sipped her drink. “Present company included,” she added.

“This is Thursday,” Elaine pointed out. “What the hell are you doing here?”

“I got news for you. It’s after midnight, all the flights have departed.”

“We’re taking a private jet, belongs to some friend of Eduardo.”

“Not bad,” Elaine said, looking impressed. “That way, you get to your hotel late enough tomorrow, so you don’t have to wait for the people in your room to check out.”

“Eduardo has a palazzo,” Dino said. “We’re being forced to stay there.”

“She’s Italian,” Elaine pointed out. “She won’t divorce you.”

“The Bianchi family has found a way around that,” Dino said. “Remember how Dolce got divorced?”

“I didn’t know she was married,” Elaine said.

“A youthful indiscretion. She married a capo in the Bonnano family when she was nineteen. It lasted less than three weeks, until she caught him in her bed with her maid of honor.”

“Not for some years. When it was inconvenient for her to still be married, the guy turned up in New York dead. Took two in the back of the head, a classic hit.”

Bedded by the Laird (Highland Warriors) by Kennedy, Rachael
Country Wives by Rebecca Shaw
The Surge by Roland Smith
Reunited by Ashley Blake
Perfectly Matched by Heather Webber
Before I Do Amazon by Freethy, Barbara
Woman On the Run by Lisa Marie Rice
Coldstorm (Heart of a Vampire, Book 7) by Amber Kallyn
Gone by Annabel Wolfe
Red Lightning by John Varley