Landfall: Tales From the Flood/Ark Universe 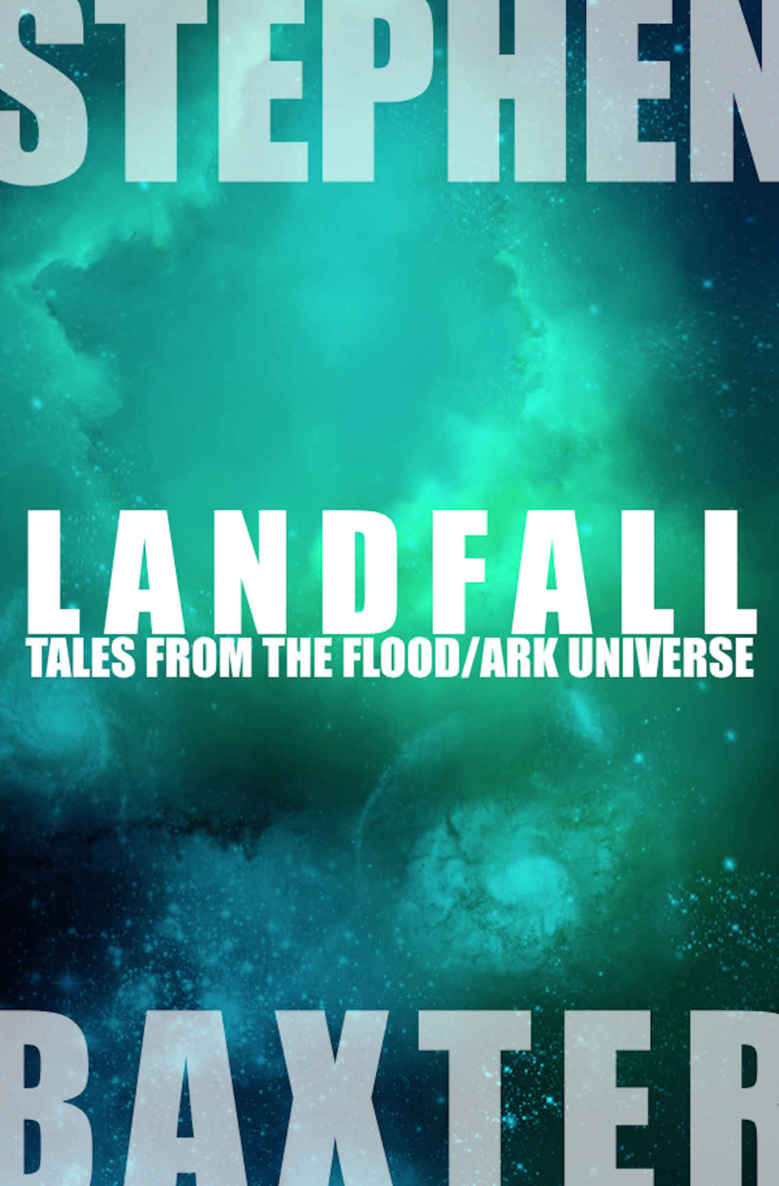 Tales from the Flood / Ark Universe

All rights reserved. No part of this book may be reproduced, transmitted or distributed in any form or by any means, electronic or mechanical, including posting text or links to text online, printing, photocopying, recording, or by any information storage and retrieval system, without the written permission of the Publisher.

‘Earth I’ first appeared in
UNIVERSES
. Copyright © 2013 by Stephen Baxter

These three stories previously appeared in the UNIVERSES omnibus from PS Publishing, 2013.

In common with many science fiction writers, the universes I invent and inhabit tend to sprawl over several books and short stories. For me, this goes back a quarter of a century to my first published story, the beginning of my ongoing
Xeelee Sequence.

My novels
Flood
and
Ark
(Gollancz, 2008-9) introduced a universe in which a handful of refugees in a primitive starship flee a drowning Earth. In the books we get to see the refugees reach colony worlds they call ‘Earth II’ and ‘Earth III’. Possibly my most frequently asked question since then has been, ‘What happened next?’ The three novellas included here are intended to answer that question. These stories are exercises in world-building.

Xaia sat up straighter in her chair, favouring her left arm with the crudely sewn gash in the forearm, and cradling her cup of looted Brythonic wine in her right hand. ‘Home, Teif?’ She forced a smile. ‘We’re having too much fun. We’ve barely started. Ask the crews.’

Xaia sat with Teif and Manda, her admiral and her general, under the silvered awning over the prow of the
Cora
. On the polished table before them, maps of the Scatter and the world were held in place by the weight of wine flagons. The
Cora
stood to sea with her sister ships a kilometre or so from the island of Manhatun, whose low, craggy profile wavered in the heat haze. From here Xaia could see smoke rising from the burning houses in the port city, and warriors with carts drawn by huge, high-stepping horses working their way through the narrow streets, and the landing craft plying to and fro, laden with goods and hostages. Balloons blazoned with the crest of the house of Windru drifted over the helpless city. On the higher land clumps of Purple glistened, useless, ugly.

The heat was intense. It was April, the peak of the hotspring; though the sun still set it each night it sailed high to the zenith each day, pouring light and warmth into the world like wine into a cup. Even sitting inert under this reflective awning was exhausting, and to work like Xaia’s crews was almost impossible. But she heard the crackle of gunfire, and the throaty boom of an artillery piece; even in the day’s heat the mopping up was continuing.

‘That’s just it,’ Teif said. ‘I have asked the crews. They’re exhausted, Lady. They long for home.’ He was a heavy-set man, about fifty, ferociously strong, supremely competent. He wore a thick grey beard that Xaia always thought must have been impossibly stuffy in the hot seasons.

Manda snorted. She stood, her wine cup in her hand, and stretched. She was taller than Xaia, well-muscled, her chest a big-lunged barrel. In her late twenties, a few years younger than Xaia, she wore her hair shaved to the scalp. In her glinting body armour she looked beautiful, but rather terrifying, Xaia thought. And even here, on Xaia’s flagship, surrounded by Teif’s best sailors, Manda’s heavy iron sword was within reach of an outstretched hand. Manda said, ‘Don’t listen to this worn-out old salt dog, Lady. My warriors loved you even before the coldspring raid that broke the siege.’

The siege of the island nation of Brython, Zeeland’s greatest rival in the Scatter, had lasted years, through the unending days of the coolsummers and the icebound dark of the coldwinters, when countless crew had died of cold and disease on their frozen-in ships. It was Xaia’s bold scheme that had broken the deadlock. The previous year she had modified a handful of her ships to give them broad, shallow-draft hulls, that did not get frozen in when the pack ice came but were lifted up above it. Even before this year’s spring equinox she had had the crews out hacking the ships free of the ice. Then teams of horses with thick gripping shoes nailed to their soles had dragged the ships across the frozen sea, and Zeelander warriors and gunfire fell on the ports of Brython, even before they emerged from their winter slumber.

Xaia knew that Manda was right about her hold on the crews. Xaia was co-Speaker of the Zeelander parliament with her spouse Thom Robell, the two of them scions of the greatest houses of Zeeland, with lineages reaching back to the Founders. Though they had their rivals in parliament, together she and Thom, united with their child Maxx, effectively ruled Zeeland, and everybody knew it. And after such a feat as the siege breaking, and not to mention the reward of Brythonic treasure on which the crews had gorged, the crews were hers for life.

‘I didn’t plan the storm that blew us off course,’ Xaia pointed out. ‘It was fortuitous that we ended up in Manhatun waters. And as an ally of Brython -’

‘We didn’t need more loot,’ Teif said. ‘The holds are creaking as it is.’

Manda said, ‘You have to seize your chances, Teif, you old stay-at-home! Who was it urged us to pursue the Brythonic army after Lundin surrendered?’

Teif spoke pointedly to Xaia. ‘The crew will follow you to the ends of Earth II, Lady. That’s true. But they have hearts, and hearths, and families. Why, most of Manda’s warriors are mothers. And mostly they would like to follow you home. That’s what they say, when they think I can’t hear them.’ He eyed her. ‘And you, too, have duties there, now that the war is won.’

Xaia, restless, stood beside Manda and stared out at the burning port. ‘Duties!’

‘An empire to build across the Scatter, now that Brython is broken at last.’

‘I don’t see myself as much of a builder, Teif. Besides it’s Thom who wears the Fourteen Orbs.’

‘But when the war is won wife and husband rule as a team. That’s the way it’s always been done.’

In Zeeland it had become the custom for men to take senior political positions at home while women went off to wage war. There was a theory behind it, dating back to the Founders, that women, less prone to blood lust than men, would wage war only when necessary, for national advantage and not for glory. Xaia knew herself well enough to know what a crock
that
was.

‘And besides,’ Teif said, ‘there’s Maxx. You haven’t seen your son in years.’

Manda laughed. ‘He’ll be fourteen years old by now. What do you think, that he’ll have sprouted a grey beard like yours?’

‘Go home, Lady,’ Teif said patiently, ignoring Manda. ‘You have won Brython, the greatest nation in the world after Zeeland. What else is there worth conquering?’

On impulse Xaia sat down and pulled a sea chart towards her. She almost knocked over a wine flagon in doing so; Manda caught it with the reactions of a cat. ‘There’s a whole world! The Scatter is just a patch on the face of the planet. There are the continents, the Belt, the Frysby -’

Teif snorted. ‘The Frysby as you know is a plate of rusted sand, where even the Purple struggles to cling on at the coasts. And the Belt is a strip of land inhabited by relics and wild horses.’

Xaia studied the map. The Belt was a peculiar linear continent that stretched across the world’s latitudes, from north pole to south – much of it uninhabitable, of course, save for the equatorial regions, where it bounded the ocean which contained the Scatter. But Xaia’s sketchy map showed one prominent settlement, called Ararat. She stabbed her finger down. ‘Look at the distances. From here in Manhatun we are as close to Ararat as to Zeeland.’

Manda nodded. ‘We could sail there and back before the end of coolsummer.’

‘Ararat is the city established where the Founders landed. Don’t they have the Shuttle itself? Who knows what other Founder treasure we might find? And the rest of the Belt is pretty much unexplored ...’

Teif looked as if he was regretting starting the conversation. ‘What are you talking about? You can’t seriously be thinking of mounting some kind of expedition to the Belt! It’s world-spanning - and worthless.’

Manda snapped back, ‘But even the Brythonics have legends of the City of the Living Dead, to be found to the far north of the Belt. Alien treasure.’

Alien treasure.
Xaia felt the hairs on her arms prickle, despite the smothering heat.

‘Or the far south, as others say,’ Teif said scornfully. ‘Anywhere out of reach, that’s where treasure always lies. Ask the scholars of the Four Universities, who have preserved much of the Founders’ lore. There’s precious little there about a City of the Living Dead. Nothing in the surveys the Founders made from orbit before they landed -’

‘But the Founders didn’t explore the whole world,’ Xaia said. ‘There’s no doubt the Dead existed, of course. We have the ruins on Little Jamaica to prove that, evidence in the Scatter itself. If we were to compare traditions among our own people with whatever we can extract from our Brythonic prisoners, and anything we could find out from Ararat -’

‘What traditions?’ Teif said, almost pleading. ‘Lady, there were no humans at all on this world four hundred years ago! Time enough to spin out lies, but -’

Xaia looked out over the length of her flagship, the iron plates set in a timber frame, much battered by war, much repaired. With the Brython war over, so was her freedom to act. Now, suddenly, out of nowhere, she had a new goal - a last chance to achieve greatness for herself, before she was subsumed into her loving, combative relationship with her husband. ‘We can do this. We have the ships, the crew, hardened by experience. We have holds full of Brythonic guns and gunpowder. There can’t be a force on Earth II to match us.’

‘And we have time,’ Manda pointed out. ‘Long months of the coolsummer before the hotfall comes -’

‘And then the winter to freeze the marrow in our bones,’ Teif said. ‘You’re talking yourself into this, Lady. I know you – impulsive! Don’t listen to Manda. She always drives you on; she for one has nothing to go home to.’

‘If you follow this whim you could cost many lives, and dissipate everything you have achieved so far. You’re just putting off your own return,’ he said now, more boldly. ‘Putting off facing your proper responsibilities.’

‘Only you could speak to me like that,’ Xaia said calmly.

‘The crews will be unhappy,’ he warned. ‘I’m serious, Lady. Some of them are already uncomfortable at having spilled so much blood in Brython. We’re all the Founders’ children. All descended from the same Fifteen. They fled a drowning Earth. They didn’t come here to bring war. If they could see us now -’

Xaia snorted. ‘The Founders were heroes. But they have been dead four hundred years. Listen to yourself, man. In another four hundred years we’ll probably be worshipping them like gods. I’m going to take a look at the inventory. Prepare a study, both of you, on the feasibility of reaching the Belt. I want a report before the sun goes down.’ She slammed her wine cup down on the map of the world, and, without looking back, walked out into the dense light of the overhead sun.