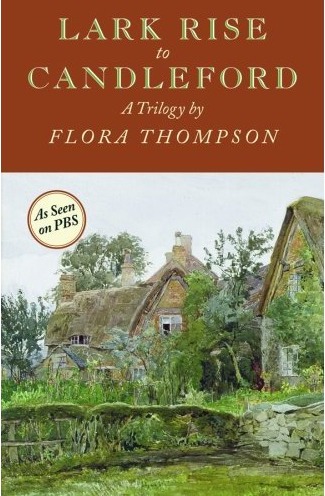 Part One of the trilogy "Lark Rise to
Candleford"

Flora Jane Thompson (5 December 1876 – 21 May 1947) was an English
novelist and poet famous for her semi-autobiographical trilogy about the
English countryside,
Lark Rise to Candleford
.

She was born in Juniper Hill in north-east Oxfordshire, the eldest of
six children of Albert and Emma Timms, a stonemason and nursemaid respectively.
Her favourite brother, Edwin, was killed near Ypres in 1916. Flora was educated
in Cottisford and worked in various post offices in southern England. The first
of these was Fringford, a village about four miles north-east of Bicester.
Flora started work here in 1891, as assistant to the postmistress, Mrs. Kezia
Whitton. Among other post offices where Flora worked was that at Grayshott, in
Hampshire, and she later moved to Bournemouth. In 1903 she married John William
Thompson, with whom she had two sons (the younger, Peter, later lost at sea in
1941) and a daughter.

Flora benefited from good access to books when the public library
opened in Winton, in 1907. Not long after, in 1911, she won an essay
competition in
The Ladies Companion
for a 300-word essay on Jane Austen.
She later wrote extensively, publishing short stories and magazine and
newspaper articles. She was a keen self-taught naturalist and many of her nature
articles were anthologised in 1986.

Her most famous works are the
Lark Rise to Candleford
trilogy,
which she sent as essays to Oxford University Press in 1938 and which were
published soon after. She wrote a sequel
Heatherley
which was published
posthumously. The books are a fictionalised, if autobiographical, social
history of rural English life in the late 19th and early 20th century and are
now considered minor classics.

Flora Thompson died in 1947 in Brixham, Devon and is buried at
Longcross Cemetery, Dartmouth, Devon.

IV At the
'Wagon and Horses'

X Daughters
of the Hamlet

XIV To
Church on Sunday

By absolute values, a true writer can never be other than
what he is. But in our imperfect world his living light will only shine among
men if it appears at precisely the right time. If it does so appear, it is not merely
good luck, because the truth should also possess a super-sensitive probe (like
the woodcock's bill) for testing the subsoil of what it works on. This is
something very different from what is called 'appealing to the popular
imagination'. Flora Thompson possesses the attributes both of sympathetic
presentation and literary power to such a degree of quality and beauty that her
claims upon posterity can hardly be questioned. Her lovers guessed it when her
three memorial volumes,
Lark Rise, Over to Candleford
, and
Candleford
Green
, were published separately; now that they form a trilogy, each part illuminating
and reflecting the others in a delicate interplay, the time of speculation is
over. This wholeness, they will say, is a triune achievement: a triumph of
evocation in the resurrecting of an age that, being transitional, was the most
difficult to catch as it flew; another in diversity of rural portraiture
engagingly blended with autobiography; and the last in the overtones and
implications of a set of values which is the author's 'message'.

Nor will these lovers be deceived by the limitations of her
range, her personal simplicity and humility of spirit and the excellent lowness
of her voice as the narrator of these quiet annals, into withholding from her
the full measure of what is her due. Is that range so restricted? The trilogy
enables us to appreciate for the first time what she has done both for
literature and social history. By the playing of these soft pipes the hamlet,
the village, and the small market town are reawakened at the very moment when
the rich, glowing life and culture of an immemorial design for living was
passing from them, at the precise point of meeting when the beginnings of what
was to be touched the last lingering evidences of what was departing. Of late
years memorial books, I might almost say by the score, have strained to
overhear the few fading syllables of that country civilization of which the
younger generation of today knows and can know nothing. A few of these have
been of high distinction. I have only to mention the names of George Bourne, Adrian
Bell, Walter Rose, W. R. Mottram, and the author of
How Green was My Valley
.
But none of these authors singly achieved the triple revelation of the hamlet,
the village, and the market town; none, with the possible exception of the
last, has, like Flora Thompson, chronicled the individual life as an integral
part of the group life and as the more of an individual one for it.

Again, by these three books being subdued into sections of
one whole, Laura now emerges into her full selfhood and as the chorus of the complete
drama. Now for the first time Flora Thompson's master work in portrait-painting
is seen to be herself. But we keep on forgetting that Laura is her own self, so
subtly has our author's spiritual humility contributed to the fineness of the
self-portrait. She has lost her life to another and so exquisitely regained it
that the personal quality of Laura, which is the key to the whole and diffuses
over it a tranquil radiance, is never mistaken as other than that of a separate
person. As remote from the present day as Uncle Tom, Queenie, or Dorcas Lane,
she is yet more living even than they. At the same time, she is something else
than the Cranfordian Miss, 'quaint and old-fashioned', as another character
calls her, something else than the lover of Nature and of books, the questing
contemplative, the solitary in the Wordsworthian, quite un-Cranfordian sense.
She is the recorder of hamlet, village, and country town who was of them but
detached from them, and whose observation of their inmates by intimacy by no
means clouded precision of insight and an objective capacity to grasp in a few
sentences the essentials of character. One of the very best things Laura ever
did was to become assistant post-mistress at Candleford Green. The post-office magnetized
the whole village.

When George Bourne described Bettesworth and the craftsmen of
his wheelwright's shop, he made them the vehicle of an immensely valuable inquiry
into social conditions now made obsolete by urban invasion. Flora Thompson's method
is entirely different. But the result is the same in both writers. It is the
revelation of a local self-acting society living by a fixed pattern of
behaviour and with its roots warmly bedded in the soil. The pattern was
disintegrating and the roots were loosening, but enough remained for sure
inferences to be drawn from it. Flora Thompson does not reconstruct the
shattered fabric like a historian nor illustrate and analyse it like a
sociologist: she reanimates it.

In this tripartite book we distinguish three strata of social
and economic period, cross-hatched by differences of social degree. In terms of
geological time, the lowest stratum is the old order of rural England surviving
rare but intact from a pre-industrial and pre-Enclosure past almost timeless in
its continuity. The middle stratum, particularly represented in Lark Rise,
discloses the old order impoverished, reduced in status, dispropertied but
still clinging to the old values, loyalties, and domestic stabilities. The top
stratum, symbolized in the row of new villas that began to link up Candleford
Green with Candleford Town, is modern suburbia. This wholly novel class in
itself had shed the older differentiations and possessed no rural background
other than the accident of place. It was the vanguard of the city black-coats
and proletariat, governed by the mass-mind.

Nor is the stratification a simple one. The two lower layers
are not only hierarchical in many grades between squire and labourer, but the upper
one of the pair is dyed a different colour from that of the natural deposit.
This is the sombre tint of Victorian moralism, quite different from the social
ethics of the old order to which it was alien. Puritanism in rural England was
never a home-brew; it was always imported from the town. The topmost layer of
the three had and has no fixed principles; its aim was quantitative imitation
and to 'keep up appearances'. Mr. Green of
Candleford Green
, who read
Nat Gould and Marie Corelli because everybody did, considered the expert
craftsman as inferior in status to himself, sitting on a stool and adding up
figures.

It is clear, then, that Flora Thompson's simple-seeming
chronicles of life in hamlet, village, and market town are, when regarded as an
index to social change, of great complexity and heavy with revolutionary meaning.
But this you do not notice until you look below the surface. The surface is the
family lives and characters of Laura and her neighbours at Lark Rise, inhabited
by ex-peasants, and the two Candlefords, where society is more mixed and
occupation more varied. But the surface is transparent, and there are
threatening depths of dislocation and frustration below it. Flora Thompson's
method of revealing them is a literary one, as was George Eliot's; that is to
say, by the selective representation of domestic interiors in which living personages
pass their daily lives. The social document is a by-product of people's normal
activities and intercourse intensely localized, just as beauty is a by-product
of the craftsman's utility-work for his neighbours.

Thus, the commonest occurrences, the lightest of words, the
very ordinariness of the home-task are pregnant with a dual meaning. This is the
reverse of a photographic method like that of the fashionable 'mass-observation'
because it looks inward to human character and outward to changes in environment
affecting the whole structure of society and modifying, even distorting, the
way people think and act. Her art is in fact universalized by its very
particularity, its very confinement to small places and the people Laura knew.
It all seems a placid water-colour of the English school, delicately and
reticently painted in and charmed by the character of Laura herself. But it is
not. What Flora Thompson depicts is the utter ruin of a closely knit organic society
with a richly interwoven and traditional culture that had defied every change,
every aggression, except the one that established the modern world. It is notable
that, though husbandry itself plays little part in the trilogy, it is the story
of the irreparable calamity of the English fields. In the shell of her
concealed art we hear the thunder of an ocean of change, a change tragic
indeed, since nothing has taken and nothing can take the place of what has
gone.

The Ferrari in the Bedroom by Jean Shepherd
The Mother Hunt by Rex Stout
Instructing Sarah by Rainey, Anne
Charlotte Boyett-Compo- WIND VERSE- Prisoners of the Wind by Unknown
To The Grave by Steve Robinson
Keena Ford and the Second-Grade Mix-Up by Melissa Thomson
Master Chief by Alan Maki
Crash by Silver,Eve
Penumbra by Carolyn Haines
Mere Anarchy by Woody Allen