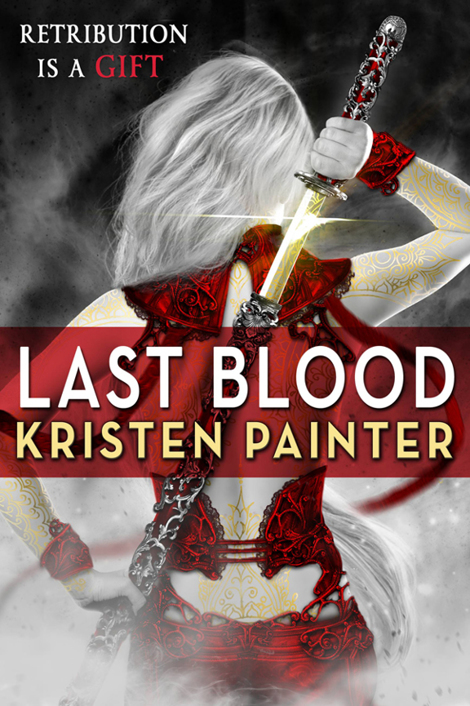 A Preview of
Red-Headed Stepchild

For Rocki and Louisa, my sisters from other misters.

I love you guys!

H
eaven has no rage like love to hatred turned—nor hell a fury like a woman scorned.

T
wenty-four hours. That’s how long it had taken Chrysabelle to get herself together after finding out that the raptor fae had devoured Mal’s love for her, leaving him cold and uncaring, only to then discover she was also pregnant with Mal’s child. Twenty-four hours as a sobbing wreck curled in her bed. Then she’d run out of tears and passed another twenty-four hours there, staring blindly at the ceiling, thinking about nothing and everything, rationalizing her choices, and trying to make sense of her future. On the third day, she’d gotten out of bed with the resolute knowledge that whatever she had to do to protect that future wasn’t going to get done in bed.

If there was anything she’d learned from her mother, it was that strong women pushed forward, no matter what the circumstances, and strong women protected their children. Even at the cost of their own lives.

Being able to protect herself and her child meant being ready for anything, and that meant training. Lots of it.

Beating the daylights out of an opponent had always given Chrysabelle a sense of peace. Even now, when the opponent was her brother, it still worked. The focus of landing each hit and avoiding his incoming blows almost made her forget about the life-changing secret growing in her belly.

It was still better than moping in bed, staring into space and trying to figure out how to make sense of a life without Mal when the child she carried was a constant reminder of everything she’d lost.

She ducked too late to avoid Damian’s bokken. The wooden practice sword caught the side of her headgear, spun her off balance, and knocked her to her hands and knees.

“Hey.” He straightened, bokken falling to his side. “Pay attention, will you? The last thing I want to do is concuss the sister I just found.” Under his own headgear, he smiled as he offered his hand. “More accurately, who just found me.”

She took the help and he pulled her to her feet. “Thanks.”

“You want to stop? You seem a little distracted.” Concern sparked in his blue eyes. “I realize we’re just getting to know each other, but I
am
your brother. If there’s anything you want to talk about…”

“Thank you.” His offer meant a lot, but this wasn’t something she was ready to share. “I’m fine.” Other than the gaping hole in her heart. She lifted her bokken. “Let’s keep going. I like having a partner again.” And she liked maintaining her edge.

He tipped his head to one side. “You’re sure? We’ve
sparred more in the last day than I used to in a week at the Domus.”

She allowed a tiny bit of what she was feeling into her face. “I need this.” Because stopping meant dealing with her reality.

“Cool with me.” He went back to first stance.

“Cool? I think a little Fi rubbed off on you.” She matched him, shifting most of her weight onto her back foot and bending her knees slightly. She pointed the tip of her bokken at his eyes and forced herself to concentrate on the present.

“There are worse people to hang out with.” He nodded at her and took the same stance.

What did he mean by that? Mal? Before she could unravel that thread any further, knocking interrupted them. They both turned toward the door.

“Speak of the devil.” Damian came out of fighting stance. “Not that you’re the devil, Fi.” He laughed. “Nice to see you.”

Fi smiled and gave a little finger wave. “You too, Damian. You seem like you’re settling in okay.”

“You too from what I hear.” He planted the tip of his sword against the gym mats and pulled off his face mask, tucking it beneath his arm. “I guess you’re here to see Chrys?”

Fi’s brows rose a tiny bit, maybe at his shortening of Chrysabelle’s name. She nodded. “Yep. You cool if she and I chat for a bit?”

Chrysabelle glanced at Damian. He took her bokken. “Sure. It’s almost lunch anyway. I’m going to get a shower, and then I’ll come back over and eat.” He winked at Fi. “If you two aren’t still having your super-secret girl talk.”

“Guys never change no matter how old they get.” Fi rolled her eyes. “I’m sure we’ll be done by then.”

Damian nodded, but the humor faded from his face and he glanced at Chrysabelle. “It’s okay if I come back for lunch, isn’t it?”

She tugged off her headgear. “Of course it’s okay. You know half of all of this is yours. House included. You don’t have to ask for permission to come over here and you certainly don’t have to stay in the guesthouse.” Again, she wondered if his reluctance had something to do with Mal. Or her relationship with Mal. Not that there was any current relationship to speak of.

“I know, but I’m comfortable there. And I feel a little responsible for Amylia.”

“She the comarré you brought back from Čachtice?” Fi asked.

“Yes,” Chrysabelle answered, but she kept her eyes on Damian. “And you shouldn’t feel responsible. I would have brought her back anyway.”

He shrugged, walked to the weapons rack, and notched the first bokken into place. “Then you’re a better person than I am.” He dropped the second one into its slot, hung up his face mask, then headed for the door. “I would have left her. After Saraphina… you just never know. See you at lunch.”

“Okay.” She watched her brother leave, sighing with frustration.

Fi spoke after the door closed behind him. “Things not going as planned?”

“Does anything?” Chrysabelle prayed Fi didn’t see that as an opening to ask about Mal. She pushed some stray hair behind one ear and quickly moved on. “How are you? How’s Doc? I’m sorry I missed the wedding.”

Fi shrugged. “So did everyone else. It was just me, Doc, his council members as witnesses, and Isaiah, Doc’s—I mean, our butler, who happens to be a minister of the Church of Bast, so he married us. Really, we just wanted to make it official and get on with our life.”

“I understand that. And I have to say, marriage suits you. You look… different. But in a good way.” Fi’s formerly long wavy hair was pin-straight and cut in a precise chin-length bob, her makeup impeccable, her clothes—which had always been good—seemed even better. “How’s Doc doing with his new position as pride leader?”

“He’s good. Busy. Running a pride is a twenty-four-seven job.” Fi looked down at her sleek little navy dress. “As for the rest of me, being the pride leader’s wife comes with access to all the best stuff, including a personal beauty team.” She laughed nervously. “Who knew?” Her smile washed out. “There’s so much stuff to go to. Meetings. Appearances. Dinners. It’s a
lot
of work.”

Which would explain the dark smudges under her eyes. Chrysabelle tipped her head to one side. “Sounds like it. Is there anything I can do to help?”

A slight alarm sounded in Chrysabelle’s head. “Why? Who’s threatening you?”

“No one. Yet. But that’s the point.” She hugged her arms around her body. “Barasa—he’s one of Doc’s council members and the pride’s main physician—he says a pride leader’s wife needs to know how to fight. And that opposition ‘rears its head’ at least once a year. More when the wife is new.”

“But I thought the only challenge that counts is one issued by the pride leader or his wife, right?”

“Yes, but…” Fi stared at the ceiling. “I’m not known for my even temper.” She shook her head and twisted the toe of one coral stiletto into the gym mat. “And it’s occurred to me that I might be a target. Doc isn’t always with me. I have a bodyguard almost all the time now when I go out.”

Chrysabelle looked over Fi’s shoulder. “Where is he now?”

“I made him stay with the car. I know how Velimai feels about strangers in her house. Sorry, your house. Yours and Damian’s.
Whoever
it belongs to now. You know what I mean.”

Chrysabelle rested her hand on top of Fi’s arm, hoping to ease some of her anxiety. “I’d be happy to help you.”

“You will? Awesome! Doc’s had his council members trying to teach me, but they’re varcolai. I don’t have that same strength or speed. Plus they’re guys. Who knows better how to fight like a girl than another girl?” Fi grinned. “I’ve seen you fight. You go hardcore. I wanna do that too.”

Four (Their Dead Lives,1) by Scott, Zack
Penumbra by Carolyn Haines
Claudine by Barbara Palmer
Cast of Shadows - v4 by Kevin Guilfoile
All That Matters by Flagg, Shannon
Angie Arms - Flames series 04 by The Strongest Flames
An Earl's Guide to Catch a Lady by Wilde, Tanya
Saline Solution by Marco Vassi
Omega Point by Guy Haley
The Trouble With Spells by Lacey Weatherford