Read One Day in Oradour Online

One Day in Oradour 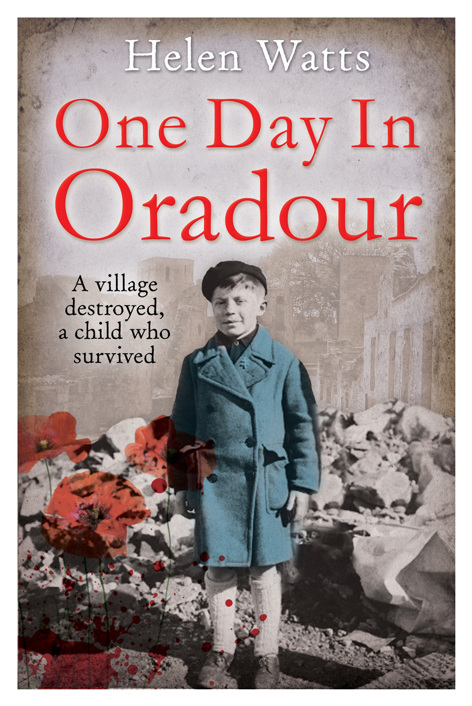 For the 206 children of Oradour-sur-Glane whose lives were cut so cruelly short on 10th June 1944 and for my own children, Jack and Georgia.

May the stories of children lost teach those who will guide our future.

9. The Gathering of the Troops

21. Escape from the Barn

27: The True Story of Oradour-Sur-Glane

Even before he flew over the brow of the bridge into the blinding glare of the headlights, Major Klausner knew that something wasn’t quite right. A movement, a shadowy figure at the side of the road, had caught his eye, but so absorbing was the cauldron of resentment and frustration bubbling up inside him that he had ignored the alarm bells ringing in his head.
Just another stupid French peasant out poaching
, he had thought.

On he’d sped, along the dark, tree-covered lane. Rain had started to fall and he knew he should slow down but he just wanted to get back to base, back to Limoges. He had already wasted enough time for one day and
he needed to clear his head and start drawing up some plans of his own. Next time he wasn’t going to miss the chance to show the men in 3rd Battalion why he’d been made their commander. And he was desperate to teach some of those loathsome Resistance fighters a lesson.

For days, the French Resistance had been hampering the progress of the SS battalions as they marched north to Normandy to defend against the Allied invasion. Speed was of the essence and yet the German troops were having to cope with ambush after ambush.

The previous day, Klausner’s friend Major Dietrich had come under attack while leading his battalion across the Dordogne river. The poor swine had been totally exposed out there on the bridge, with nowhere to shelter, when the Resistance opened fire. And they had only just regrouped when they came under a second attack on the north side of the river. Thankfully, and in typical fashion, Dietrich had made sure that the river bank was littered with French bodies before moving on.

Then this other Resistance cell had had the gall to attack the German garrison in Guéret, and Klausner had been summoned immediately to the division headquarters in Limoges.

‘You have complete authority to re-take the garrison and annihilate them,’ Major General Scholz had said, waving a copy of a memo he had received a few days
before from General Müller, who commanded the entire Das Reich division within the SS. ‘Remember, these Resistance fighters are illegal combatants. They are defying the 1940 Armistice that their own country signed.’

As he stood before Scholz’s desk, Klausner had had to clench his jaw to prevent the smile from curling around his lips and his stomach had lurched with a rush of excitement. This was his chance to strike back. Justice would be brought. The Resistance would be left in no doubt that any more attacks around this region were a very bad idea.

Swiftly, Klausner had mustered a small convoy and headed for Guéret. They made good progress on the quiet, evening roads and took no time at all to surround the garrison.

But the siege was over before they even entered the building. The sound of their vehicles flying into the courtyard and pulling up abruptly on the gravel had alarmed the Resistance fighters. Momentarily distracted by the noise from outside, the gang leader lowered his guard long enough for the commander of the garrison to overpower him, killing him with one shot to the chest at close range from his own gun.

With their leader dead, and realising that they were outnumbered, the remaining gang members lost their
nerve. Two surrendered immediately to the garrison commander and it took only minutes for the rest to be rounded up. So by the time Klausner and his men got inside, the garrison was already back under control.

Klausner knew that his words of praise to the commander should have been heart-felt, but even as he uttered them he could feel the resentment rising in his throat. He hated the Resistance and their underhand tactics. Too spineless to stand up and fight in public for their country, too cowardly to battle face to face, army to army, they chose instead to strike in the night, to lay traps and to pick off their targets from afar. How dare they call themselves heroes! How he would have loved to be the one to teach them a lesson here tonight… to show them what a true hero looked like.

Spinning on the heels of his highly polished SS boots, Klausner had stormed out of the garrison, barking at his men to follow him, then leapt into the closest vehicle and sped off.

Now, alone, and several kilometres ahead of the rest of the returning convoy, Klausner knew he had hit the bridge too fast to be able to stop himself careering into the road block ahead. Dazzled by the lights, he would have to take his chances and swerve.

Trees to the right. Open darkness to the left.

He braced himself, slammed on the brakes and turned the steering wheel. The front tyres hit the grassy bank at the side of the road, throwing Klausner first forwards, and then sideways as the brakes finally bit and the jeep span to a halt. A jolt of pain ran through his shoulder where it had struck the side of the jeep and his neck felt numb.

He blinked repeatedly, disoriented by the lights. He could just make out the shape of a small delivery van, with a car parked either side of it, all facing the bridge, engines running. Klausner heard footsteps approaching fast. He had to get out. He slid his hand into his jacket to draw his pistol while desperately groping for the door lever.

‘Don’t move!’ screamed a voice in his ear. The attacker went straight for Klausner’s hand and twisted his wrist, jerking his arm behind his back as he slammed the Major’s head into the steering wheel. Pain shot through Klausner’s eyes and nose and a salty trickle of blood immediately ran down onto his upper lip.

The door was wrenched open by a second attacker who snatched the keys from the ignition. Klausner’s hands were tied behind his back and his pistol removed from his jacket.

While the second attacker held Klausner’s own pistol to his temple, the first yanked him upright before
grabbing him by the collar and dragging him out of the jeep. He breathed heavily as he pulled Klausner up onto his feet. Standing behind him he put his lips against Klausner’s ear and spat out some words in German, spoken with a thick French accent.

‘You’re coming with us, Major. Don’t make a sound.’

‘Come, Alexis, we must go,’ said the second attacker. ‘The others can’t be far behind.’ He moved round in front of Klausner as he spoke, and Klausner could see that he was much smaller than the man holding him, but fit and well-toned. His face was narrow, his features pointed, the tip of his nose slightly up-turned and shrew-like, and he wore a lumpy woollen hat pulled down low over his intense, beady little eyes. Klausner noticed a dark, raised line of flesh across the man’s cheek. A fresh scar, just beginning to heal.

Klausner knew these were Resistance fighters. If he was lucky they were taking him hostage. If not, he was a dead man. His best hope was to go quietly and buy himself time.

Two more men, both dressed completely in black, with leather jackets and felt berets, helped to bundle Klausner into the back of the delivery van, then the smaller of his two assailants climbed into the driver’s seat. Klausner counted five others getting into the cars.

As the doors on the rear of the van were slammed
shut and bolted, another man jumped into the passenger seat beside the driver. ‘Quick! Quick!’ he screamed. ‘Headlights. The other edge of the woods. Go, go, go!’

This must have been the lookout – the figure in the trees – who Klausner had passed on the lane before he reached the bridge.

Klausner tried to sit up to see out of the tiny window in between him and the front cab of the van but, not being able to use his hands to hold himself up, he was instantly thrown to the floor again as the van did a violent U-turn to make its escape.

Klausner quickly lost track of where he was as the van made countless twists and turns down the winding country lanes. He was not surprised that his captors were avoiding the main roads. Very soon the entire Das Reich division would know that his jeep had been found abandoned and the whole area between Guéret and Limoges would be under search.

He had to think fast.

He groped in the dark for anything which might function as a weapon but found only empty sacks and something like grain or seed spilled all over the floor. There was a sweet, earthy smell, too. Klausner guessed he was in some kind of farm vehicle.

Finding nothing useful, Klausner began instead to work at the rope which bound his hands. He twisted and
pulled his wrists this way and that behind his back until he could feel the knots loosening and the rope starting to slacken. His skin burned with pain and he had to grit his teeth, but eventually he could feel a hand starting to slide. One more tug and twist and he was free.