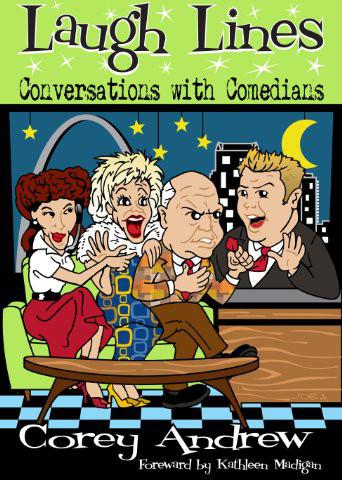 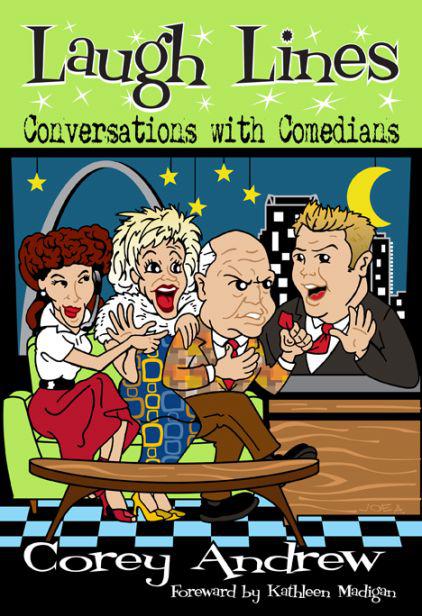 All rights reserved. Except for brief quotations in critical articles or reviews, no part of the book may be reproduced in any manner without prior written permission of the publisher.

I’ve been having chats about comedy with Kathleen Madigan for the last decade and a half—since I was a journalism student at Southern Illinois University, also her alma mater. I asked Kathleen to share her thoughts on a necessary evil in a stand-up comic’s world—being interviewed by members of the media (and why she doesn’t mind
me
bending her ear so much).—Corey

“
I think a lot of them are lazy. They don’t do their homework beforehand. They don’t think of good questions.

I have to be polite. I have to be nice. It’s amazing to me. I’ll be speaking to someone from a major newspaper, who goes, ‘Um, why did you get into comedy?’ That has been answered 150 times on my Web site. Internally, I get pissed. I went to journalism school. ‘I know what you were supposed to do, motherfucker, and you didn’t do it! Now I’m gonna have to sit here and repeat everything that was available to you an hour ago.’

I can’t even imagine. Even when I was in journalism school, tired and hung over, I would not have gone in ill-prepared into something, because I would have thought I could fuck myself.

Now, the pay is crap. I can understand. Why would you want to work that hard for shit money? I get it. Back then, I was talking to major newspapers and radio stations and they still weren’t asking good questions.

I appreciate the amount of knowledge you have about comedy. I say ‘
Ron White’
to you; you already know who that is. I say that to other reporters; ‘Is that one of them
Blue Collar
guys?’ I’m not expecting everybody to know everybody, but it’s nice to talk to you, because you have knowledge of stand-up comedy, of the people involved, of what’s going on in the field.

Your questions are different and more thought out. It’s like when I’m on the road. I can write you out the top hack 50 questions. It doesn’t go deep. It always stays way superficial.

Looking back, meeting a Python, a Not Ready for Prime-Time Player, half the cast of Carol Burnett and the Kids in the Hall seems a bit surreal.

My love for comedy was introduced and heavily influenced by my father, who would let me stay up waaaaaaay after bedtime for early tastes of “Saturday Night Live” and “The Three Stooges.”

One of my most vivid memories of him was my waking up bleary-eyed and walking to the living room to listen to him sing-a-long with Moe, Larry and Curly to “The Alphabet Song,” while enjoying a deep dish of ice cream topped with peanuts, cookies and a spoonful of frozen, crunchy peanut butter.

HBO in the ’80s was a great place for a comedy-loving kid like me to find stand-up—even if I didn’t fully understand all the jokes. I loved Rodney Dangerfield’s young comedians’ specials and dreamed of one day being in front of a brick wall with a microphone.

I interviewed these comedians over the past 15 years, beginning when I was a budding journalist in college. My friends, James Hallar and Scott Kastrup, got a kick out of meeting Rudy Ray Moore and his entourage while we were all still pups in school.

Everyone included here were people I wanted to speak to, peel their brains a little and find out more about. I am an admirer of all contained herein because making people laugh is one of the greatest things in the world.

I’ve only included the excerpts of the interviews that I think are insightful or amusing, which is why some are shorter—or much longer—than others.

I hope you enjoy getting to know the 50 or so humorists in “Laugh Lines.”

This book is dedicated to my future husband, Kendall, for his patience and love (especially during the editing process). Our babies also deserve thanks, as they snuggled on the couch with me as it was being put together. I love you, Zuni, Phoebe, Tootie and Mr. Bernie.

To my wonderful friend, artist Joe Anders, who created a hilarious and eye-catching cover for this book, I owe an enormous amount of gratitude. He also drew some hysterical caricatures within. Love that Aykroyd.

Here’s to Kevin Duncan, an amazing artist I had the privilege of collaborating with during my professional career as a newsman, and once again for this book. So many of these pieces made me laugh out loud—and almost tinkle a little.

Thanks also go to Jimmy Valentine, who I’ve not had the pleasure of meeting in person yet. He used my interviews to create some hysterical caricatures of the comics within. That Mitch is priceless.

I’d also like to thank Dave Kirk, a new friend, who did a charming black and white portrait of Bob and David.

Gentlemen, I hope the words contained in this book do justice to the fine drawings within.

A special tip of the Kangol to Katy. She knows why.

Kids in the Hall—Dave Foley

Kids in the Hall—Mark McKinney

Kids in the Hall—Scott Thompson

5 minutes in a limo with George Carlin 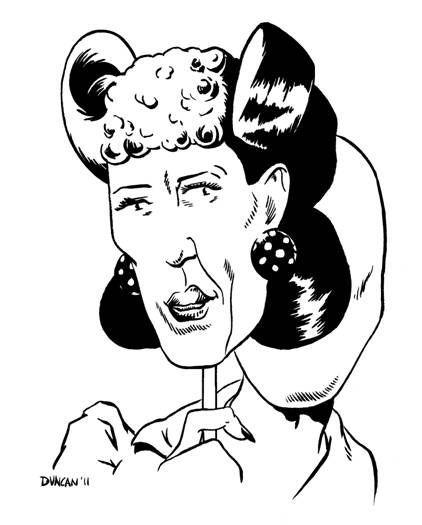