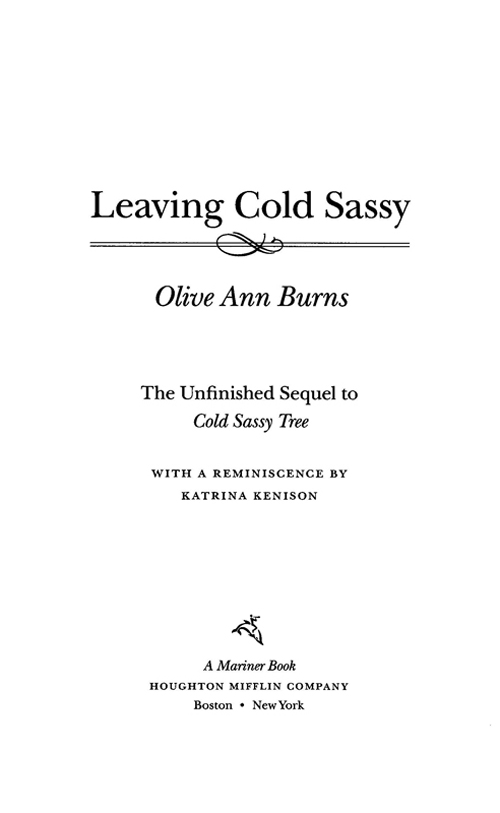 A Note from the Publisher

Papa and the Bull

Copyright Â© 1992 by the Estate of Olive Ann Burns

All photographs are courtesy of Mr and Mrs. Nathan LeGrand, Becky Sparks, and John Sparks, unless otherwise credited.

A Note from the Publisher

A
T THE
time of her death in 1990, Olive Ann Burns had been working for five years on a sequel to her best-selling novel,
Cold Sassy Tree.
Since its publication in 1984,
Cold Sassy Tree
has become a phenomenon, taking its place alongside such American classics as
The Adventures of Tom Sawyer
and
To Kill a Mockingbird.
It is the story of life in a small Georgia town at the turn of the century, as seen through the eyes of fourteen-year-old Will Tweedy. In the course of three momentous weeks, Will mourns his grandmother's death and then watches as his grandfather scandalizes all of Cold Sassy by up and marrying a fresh-faced young milliner thirty years his junior.

In
Time, Dirt, and Money
(the working title for her novel), Olive Ann picks up Will's story in 1917, just as he is falling in love with his own wife-to-be and grappling with the changes time has wrought in his beloved hometown. Fifteen chapters of the novel are complete, and Olive Ann had mapped out the rest of the story in her mind. Despite a long battle with cancer and congestive heart failure, she continued to write with tremendous energy and pleasure.

To the end of her life Olive Ann Burns was passionately interested in Will Tweedy's futureâas were her thousands of fans, who have waited eagerly for a second book. In large part, we are publishing her unfinished novel for those readers. Anyone who came under the spell of
Cold Sassy Tree
will welcome this glimpse of Will Tweedy, now on the brink of adulthood; of the feisty young schoolteacher who captures his heart; and of Cold Sassy itself, a town that has claimed a permanent place in our imaginations.

We would not undertake such a publication were we not certain that Olive Ann herself wished it. For years, Olive Ann promised her readers a sequel; she dictated the first draft when she became too ill to write. She endured nearly three years of complete bedrest without complaint, for she spent long afternoons in Cold Sassy, Georgia, chronicling the adventures of our old friends. But during her last hospitalization, she realized that she might not live to complete the novel. Late on the night of June 22, 1990, while lying awake in the Georgia Baptist Hospital, she dictated a letter to her next-door neighbor, Norma Duncan. It said, in part, “I've figured out a way that if I don't get to finish the novel it might still be marketed as a small book.” With this publication, we fulfill Olive Ann's wish to let people know what happened to Will Tweedy, and we trust that her many fans will welcome her final pages.

I
THOUGHT
I was roaring into Sanna Klein's life, but if I'd been on tiptoe instead of a motorcycle, it wouldn't have made any difference. She didn't even hear me coming. Everybody in Cold Sassy was at the watermelon cutting that Sunday afternoon except the bedsick, and to her, meeting them was more of an ordeal than a party.

The school board always put on a watermelon social the day before school started in September to introduce the new teachers to the townspeople. I'd never missed a one, but this year I wasn't going. I didn't much feel like facing that many homefolks. It was 1917, the United States had got itself into a world war, and I was twenty-five years old and not even in uniform. While some of the fellows I grew up with were already dying in France, I was working for the University of Georgia over in Athens, twenty-three miles from Cold Sassy. I told myself I'd outgrown a small-town watermelon cutting. But the truth is, I didn't have the nerve to go. Then on Thursday I ran into my old friend Smiley Snodgrass at the Athens Hardware Store. “Well, if it ain't Will Tweedy!” he yelled, slapping me on the back. “Hey, Will, you go'n get over to P.C. for the watermelon cuttin' Sunday?”

I need to explain “P.C.” Back in 1907 our town council decided Cold Sassy sounded too countrified for an up-and-coming business community, and they changed the name to Progressive City. My Grandpa Blakeslee wouldn't have allowed it, but he was dead. In the nearly ten years since, the town had progressed, but the new name still hadn't caught on. Progressive City sounded silly and took too long to say. Those of us who didn't keep calling it Cold Sassy just called it P.C. Old Doc Slaughter still had
COLD SASSY, GEORGIA
, on his office letterhead. “Anybody you hear callin' our town Progressive City,” he said, “you know he's just passin' th'ew.”

Anyhow, here was Smiley, come to Athens to buy some plumbing pipes. Smiley was bursting with news. “I done got you a teacher picked out, Will. Her name's Miss Klein and she's from over in Mitchellville. We ain't got but three new teachers this year,” he added.

“Yeah, Papa told me.” Papa was head of the school board.

“I reckon I'll see you there.”

“Cain't make it this year, Smiley. I'll meet her later.”

“Well, I'll gar'ntee you, Will Tweedy, if your later ain't soon, somebody's go'n beat you to her. She's a pure-T beauty, Will. Real foreign-lookin'. I-talian maybe. Or Spanish. Might could even be a Gypsy. Anyhow, she's got heavy black hair, and black eyes, and her eyelidsâlaw, they's so smoky-dark it's like she reached in the f'arplace and got herself some sut and smeared it on.”

When I didn't say anything, he added, “I reckon you know that her and them other two teachers are rentin' the upstairs rooms at Miss Love's house.”

“I built a bathroom up there so Miss Love could rent to'm.”

“Miss Love thunk it up, to save space indoors.”

The bathroom was set into an L-shaped corner of the roof. From the street it looked like a playhouse. Had a roof, a porch, a corner column, banisters, a door, and two little windows. Smiley had cut a door to the bathroom porch from the upstairs hall. This bathroom was an improvement over the backyard privy Miss Love had to use when she married Grandpa Blakeslee, but nobody would look forward to going out there on a freezing-cold, rainy night.

The clerk came over to Smiley. “I've got up your order, sir, and toted the sum. You want to come see is it right?”

Smiley started to follow, then turned back to me.

“Well, anyhow, but...well, you know...” Smiley kept the conjunctions coming whenever he was trying to think what he wanted to say. “Well, ain't it about time you quit bein' hurt about Trulu Philpot or whatever her name was?”

“You tend to your business and I'll tend to mine.”

He shrugged. “Well, so anyhow, yesterd'y I took Miss Klein's trunk and thangs upstairs to her room, and I'm sayin' you better latch on to her.”

I picked up a tenpenny nail, tossed it, caught it, and put it back in the barrel. “I know I'm God's gift to women, Smiley, but you met her first. How come you're so willin' to give her to me?”

“Shoot dog, Will, Miss Klein isâwell, refined as heck. She wouldn't give somebody like me a second look. Now I don't go so far as to say you're refined, but, uh...at least you're educated.”

Smiley wasn't the only one who already had me matched up with Sanna Klein. The next day I got a note from Miss Love, my grandpa's widow. The word
widow
sounds like “old woman,” but Miss Love was still high-style and beautiful, and looked young despite the fact her hair turned solid white in the month after Grandpa died. Every widower and bachelor in town would be courting her if she'd give them half a chance.

As usual, she began the letter “Dear Will Tweedy.” Grandpa Blakeslee used to call me both names, and Miss Love had kept it upâin his memory, so to speak. Maybe it was in his memory that we both still called our town Cold Sassy instead of Progressive City or P.C.

You must come meet “my girls”âall twenty-two years old. The first to arrive was Miss Isa Belle Hazelhurst, from Ty Ty. She has dimples and a sweet face, but is a little empty and silly, I'm afraid. You'll be interested in her south Georgia accent. She pronounces the “i” in “nice” and “ice” like the sound of “i” in “bicycle,” Those sixth-graders will be mocking her from the first day, poor thing. “Isa Belle” is pronounced like “Isa-belle” but she says just call her Issie.

She is sharing the large upstairs bedroom with Miss Lucy Mercer Clack from Clarkesville, a nice plain sensible young lady.

Miss Sanna Klein has the small bedroom by herself. I think you may be really interested in her, Will. She's a beautiful little brunette.

Judging by the quality of her clothes and her manners, she obviously has what your mother would call “background.” She's from Mitchellville and is to teach fourth grade. Just a lovely girl.

See you at the watermelon cutting if not before.

P.S. I guess you've heard that your Aunt Loma came in on the train Tuesday.

Two years before, Aunt Loma had gone off to New York City to seek fame and fortune on the stage, leaving her son, Campbell Junior, for my parents to raise. She claimed to feel guilty about it and had just gone back to New York after being home for a month “to be with my boy.” But from what I heard, she didn't spend any time with Campbell Junior except to tuck him in bed at night like he was still little bitty instead of twelve years old.

I wondered briefly why Aunt Loma was back again so soon. But I was more interested in Miss Sanna Klein. Sanna...Sanna...What an odd name. Vaguely familiar, though I was sure I'd never known a Sanna before.

Sanna Klein was exotic and beautiful. She was refined. Miss Love approved of her. Suddenly nothing this side of dropping dead could have kept me away from the watermelon cutting.

Usually when I went home, I took the train from Athens and used Papa's car after I got to Cold Sassy. But that Sunday I rode my motorcycle, with the sidecar attached so I could take two pillowcases full of dirty clothes for Mama's washerwoman to do up. There's nothing like a Harley-Davidson for getting around mud holes, rocks, and wagon ruts on dirt roadsâor for making an impression on girls. I stopped by home, left the clothes on the back porch, and went directly to Sheffield Park.

Saddle horses and buggy horses were tied under trees on the far side of the baseball field. Cars sat in a straggly row near the wagon road into the park, so as not to scare the horses or make dust. I stopped the Harley-Davidson between Miss Love's old black Pierce automobile and Wildcat Lindsey's new Model-T Ford, and lit up a cigar. Most of the university students smoked cigarettes, but I favored Tampa Nuggets.

Then I headed over toward the town band, already playing in the big eight-sided pavilion for the crowd gathered in the shade of some huge oak trees. The dusty, dried-up grass was thick with low-hovering yellow jackets, but I barely noticed them. My mind was on Sanna Klein.