Read Lesson of the Fire Online

Lesson of the Fire 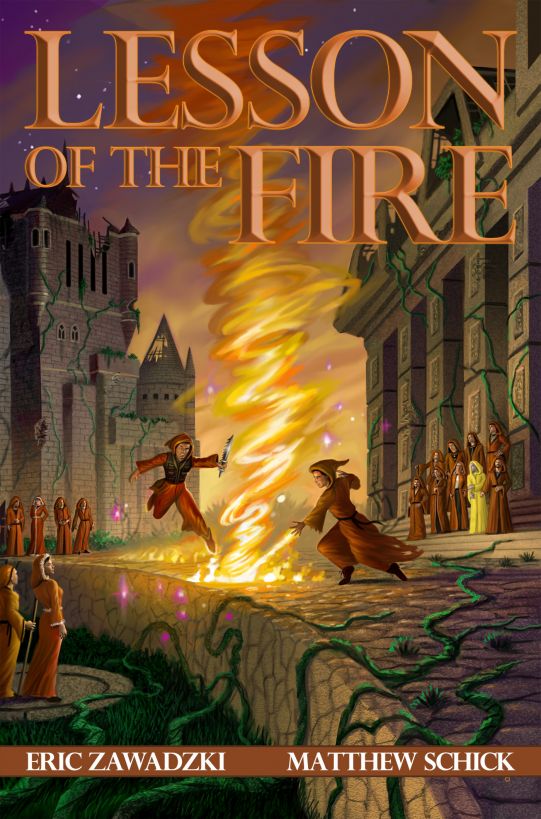 By Eric Zawadzki and Matthew Schick

Lesson of the Fire

This is a work of fiction. Names, places,
characters and events are used fictitiously,

and any resemblance to actual persons, living
or dead, places or events
is entirely coincidental. 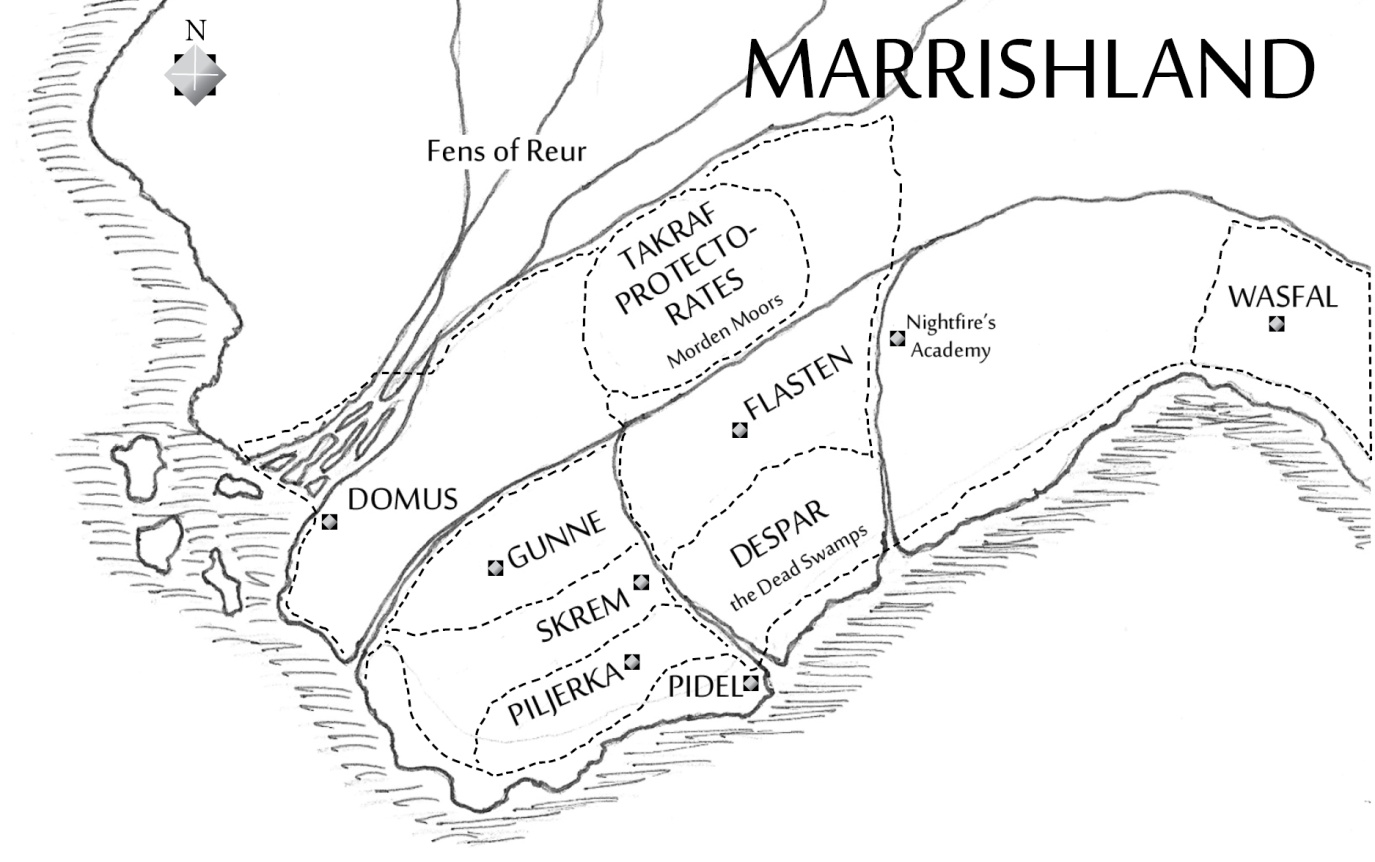 The following is an account of the Takraf
War, written as what Mar scholars describe as a narrative history
in the tradition of the Gesyk Philosophy. This means it is both a
history and a story about the people who played a role in that
history. Like a “pure” history, it is based on eyewitness accounts
of events. Numerous scholars labored over it to ensure every detail
is as accurate as possible. The account describes all the major
events of the Takraf War, as well as the causes and consequences of
each.

Its focus, however, is on the people who
played important roles in that conflict — their motives and their
relationships to each other. While it is easy to see nothing but a
civil war between factions vying for control, those at the center
of it were passionate people fighting ideological battles. In
particular, the account explores why the war’s outcome mattered so
much to each of them that they put their own lives at risk.

Most of all, it is the story of Mardux Sven
Takraf himself — a genius or madman, a hero or tyrant, depending on
whom you ask — and of the humble storyteller whose tales of
Takraf’s life shaped its outcome by teaching him the lesson of the
fire.

“
First-degree wizards wear bright green
cloaks. As a wizard rises from first-degree to seventh, the color
of his cloak changes to reflect his rank — green, auburn, blue,
amber, cyan, lavender and yellow. A wizard who reaches the highest
rank, eighth-degree, wears red.”

The Magical Tradition of Marrishland

Eda Stormgul walked the broken stone streets
of Domus Palus, the capital and largest city in Marrishland. Swamp
grass grew from cracks in the street, and to one side, a tree grew
in the crumbled remains of a centuries old building’s
foundation.

Even in the midst of high
civilization
,
the
swamp encroaches,
she mused.

The wizard wore thigh-high leather boots over
her thick brown pants. Her tan shirt clung to her body in the early
summer heat, and the clean leather utility vest and thick
cyan-colored wool cloak she wore only made her sweat more. Heavy
leather gloves hung from her belt, and the hilt and gouger of a
marsord peeked through a slot in her cloak just above the knee.

The suffocating night air only added to the
sense of being smothered as the crumbling stone buildings leaned in
around her. Eight lesser wizards followed her in loose formation,
the colors of their cloaks — six wore bright green and two auburn —
barely visible in the light from a dozen constellations. None of
the lesser wizards carried a marsord, the rare, two-bladed weapon
that only the rich and powerful could afford to have crafted from
what little metal was found in Marrishland. Eda knew she wore hers
at the pleasure of her eighth-degree patron. She had no delusions
about her status.

The patrol walked the night-shrouded streets
with no torches. Eda glanced up, feeling watched. Overhead, the
constellation of Marrish stared down at her from the moonless
sky.

The stars, souls of our
greatest heroes
, Eda thought, remembering
her father’s stories. He had believed they continued to guide the
Mar in death as they had in life. Most of the wizards living in
Domus Palus regarded it as superstitious nonsense only taken
seriously by rural mundanes, and Eda had lived in the city long
enough to question her beliefs.

At home, we shunned slaves and wizards.
Here, I am a wizard, with two slaves, and though my father might be
watching me from above, he might also be feeding the swamp.

The gaze of the stars felt accusing now. Her
boot caught on a crooked cobblestone, and she stumbled. One of the
green-cloaked wizards caught her before she fell. She thanked him
and turned her attention from the stars to the path ahead.

A flash of white light, like a lantern
suddenly lit, filled the square. Shielding their eyes, the wizards
hesitated.

This is what we have waited
for,
Eda thought, grasping the hilt of her
marsord and drawing the finely sharpened hacker from its sheath. A
form materialized in the light. A man crouched on the ground in the
center of the light, his red cloak tight around him. He kept his
head down as he recovered from teleportation sickness.

Eda reached for a bottle on her belt, nodding
to her wizards. She poured a few drops of the bitter brown liquid
onto her tongue and blinked her eyes a few times as the torutsen
took effect. The wizards followed suit.

All around, a sea of colored motes appeared —
green, blue, auburn, amber, cyan, lavender, yellow and red —
drifting lazily across the square like dust caught in the sun. Near
the wizards, it whirled as they gathered it with silent will. This
was the myst, the source of magic, and though Eda knew it was
always there, only torutsen allowed her to see it like this. She
had heard some people say that, with enough training, one did not
need torutsen anymore.

The man rose to his feet before she was
ready.

Some of the greens shot small bursts of fire
that quickly turned parts of his cloak black. The auburns hollered
for a direct attack, but Eda shook her head.

He recovered too
quickly,
she thought, raising her
marsord.

The first real flame erupted from the stone
near the man and immediately went out. Other bursts exploded
against an invisible shield thrown up absently even as the red
wizard expanded the circle of white light surrounding him.

Eda joined the attack, tearing at his
defenses with counterspells.

The explosions and steam drew six more
auburns and two more greens to the square. They were seventeen
against one as the new wizards created a cocoon to entrap the man.
He disappeared from view in their cloud of smoke and flame.

Eda stepped away from the
cocoon, nodding to the auburn in charge of the
reinforcements.
They will take care of the
rest
. She ordered her patrol to fall back,
but kept her eyes on the white cocoon surrounding the
intruder.

“He must have suffocated by now,” someone
said.

Eda nodded grimly.
At least his blood is not on my head.

“Where is that light coming from?” a green
whispered.

The white light had not faltered.

“Get back!” she shouted to the auburns,
raising her marsord.

Too late. A circle of green flame exploded
from the cocoon, engulfing the reinforcements in a wall of fire
that stopped just short of Eda and her patrol.

When her vision cleared, the man was already
moving toward her with incredible speed.

She cut at him with the hacker and he swept
the blade aside with his arm. Leaning in, she reversed the marsord
and lunged for his ribs with the gouger, but he caught the short
blade with his left hand, lifting his right hand at the same time
as he met her eyes.

Eda’s eyes widened as she saw his
clean-shaven face.

The greens in the square picked at his back
with sparks and skin rashes — weak attacks were all they could
manage, right now.

“Is it you?” she started, and he closed his
fist.

An unseen hand slammed her down to the uneven
stones. The marsord was wrenched from her hand, clattering to the
stony pavement.

Stunned, she watched him calmly pick up the
weapon and turn his back on her — one red-garbed wizard against
sixteen greens and auburns, who howled as they charged with knives.
He lowered the loosely held marsord and raised his left hand as if
such a gesture would halt them.

She shouted at them to stop, but they didn’t
hear her.

The wall of flame they ran through was
white-hot. Their screams turned from rage to agony as they writhed
on the ground.

She reached for the myst through the wall of
cyan motes that their adversary had built around her. The motes of
green and blue passed through the barrier in an insignificant
trickle. The red wizard took two quick steps toward her and pressed
her marsord against her throat.

“Surrender!” he demanded, his face clearly
familiar to Eda now that the fight had subsided. His head whipped
up as someone groaned in the square.

He glanced at her two auburns, who were
healing the wounded. In a few more minutes, someone might be able
to fight.

“Tell the others to do the same.”

“Obey him,” Eda called to them.

The auburns nodded and continued their
healing.

He helped her to her feet and handed her back
her marsord as though giving a bowl of soup to a guest. Then he
helped the auburns heal the injured. She followed him. Two of the
greens had died, their faces seared to the bone. Eda turned
away.

How hot is his fire,
she thought,
if it cut
that deep?
Mar magic was best at healing
surface wounds, and fire seldom burned to a deadly
depth.

“What is your name?” he asked her after all
the wizards had been healed. “And why did you attack me?”

She cleared her throat and
met his green eyes.
Maybe it is not him.
No, it is him. How could he forget me?

“Eda Stormgul,” she said. “Our master has
ordered us to kill all eighth-degree wizards entering Domus Palus
until the Chair is secured by his allies.”

Rage flashed across his face, but it wasn’t
directed at her. He glanced at the dead greens. “Who sends greens
and auburns to fight reds?”

Eda had been asking herself that question all
day. “We have received many strange orders lately. Rumor has it one
of Nightfire’s apprentices intends to try for the Chair — the one
man the Dux of Flasten fears.”

The red smiled at the flattery. “He does not
fear me, yet, but he will.”