Let Me Just Say This 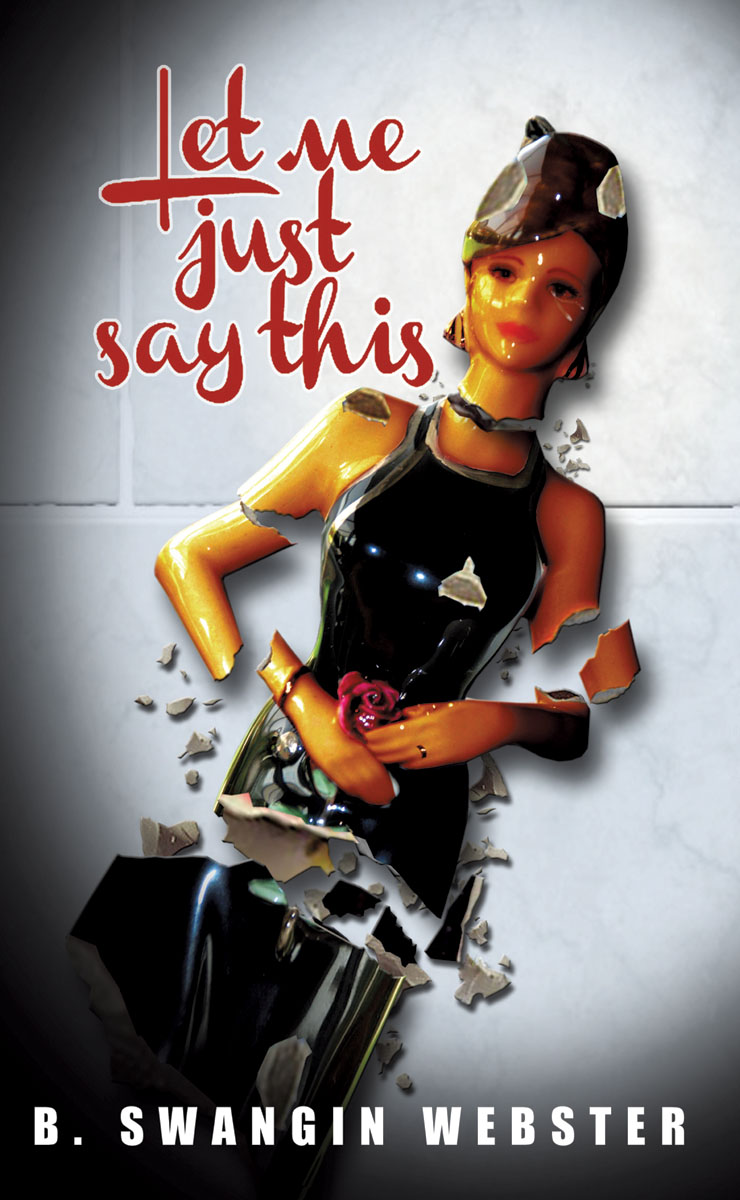 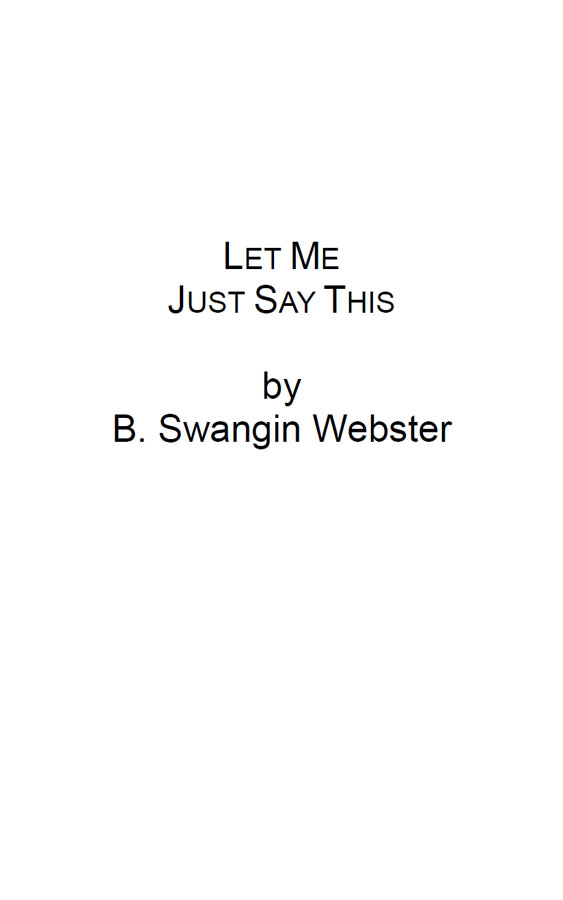 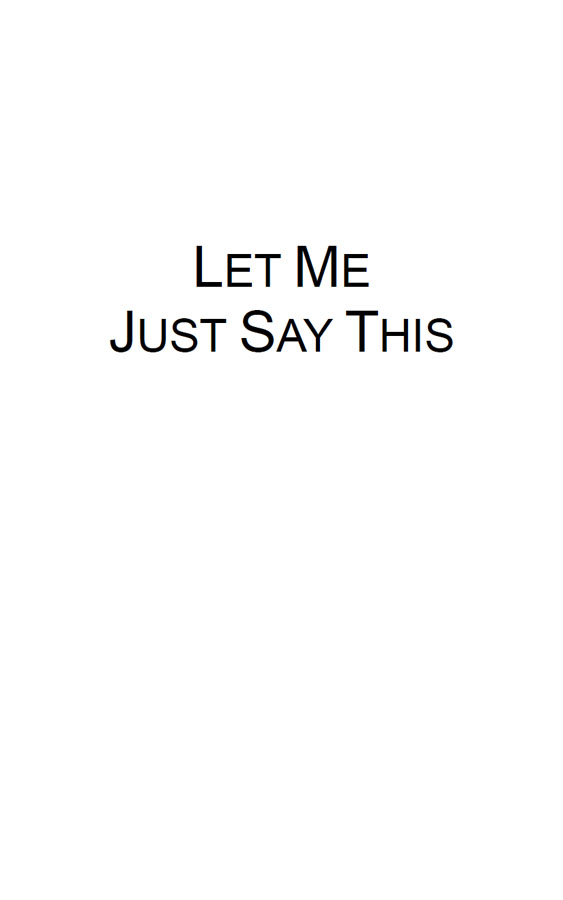 For anyone who has a dream. It might be deferred for a while, but as long as it is your dream, make sure you pursue it. Make it happen or forever wonder what if.

I would like to thank HIM from whom all blessings flow.

I would like to thank all of my friends. Because of you, this is a dream turned into a reality.

I would like to thank my kids, Kiera, Zac Jr., Greg, Justin, and RaShaunda. I couldn't ask for better young adults.

I would like to also thank LZ and Zavier, Jayden, Tyson, and now the diva, Khloe and baby Isaiah; Nina loves you more and more each day.

To Renesha, always good for a laugh or two.

To my Mattawoman family, I love you to death. Thanks for the push to get me moving and the “mini- meetings” in the conference room.

Shelia, you are like my mother and always there for a good laugh, dirty joke and a good cursing out when necessary.

To Cliff, thanks for all of the laughter in the “morning lounge”.

To Shirley, I love you girl. To my sister; although far in distance, still close to heart.

To my brother Mike, well, what is there to say? To my other children, Nu-Nu and Rico and Kelly I love you very much. To Yvonne Medley, thank you for sharing your writing group with me and encouraging me and congratulations on your new novel.

Ok people, Let me just say this: This is the work of an overly active imagination. Don't call the police, and don't overthink it. Just enjoy it and happy reading.

He shook his hand while trying to stop the sting, “See what you make me do? Why you always have to pluck my fucking nerves? Why can't you leave shit alone when I say so? You make me so fucking mad I can't see straight! Shit!”

He makes me sick, Cheryl thought as she walked into the bathroom to wash her face and calm down. I'm so sick of this. As she turned toward the mirror, she shook her head.

“When are you going to leave him? He slaps you around whenever he gets the inkling to, and it's not even like he cares about your feelings,” she said out loud.

As she started to giggle, she felt as if she was losing her mind.

Kevin went to the den and poured himself a drink.

“Shit! Ungrateful! That's what she is.” It wasn't like she could hear him screaming to himself. “Why can't you just take no for an answer? Always nagging me! I said no the first four times you asked, yet you had to keep pushing me!”

He took a gulp from the glass and sat it on the table and walked quickly back upstairs.

“Look, maybe you can go with me sometime, but stop acting like some spoiled brat that can't get her way. If and when I want you to go with me, I'll take you. You understand?”

“Who are you talking to?” she shouted.

“Who do you think I'm talking to?”

Cheryl brushed by him and he grabbed her arm. Cheryl pulled away from him. He spun her around and before she could say another word, he slapped her so hard she bit the inside of her mouth.

Kevin shoved her against the wall, and as she tried pushing him away, he slapped her so hard she saw blackness for a split second. As he started walking away, Cheryl mumbled.

“What the fuck did you say?”

“Don't try and whisper now, if you got shit to say, say it out loud!”

“All I said was, why you always gotta be pushing and hitting on me?”

“Don't you ever fucking question me,” he said, slamming her against the wall, over and over again. As she tried to walk away, he pushed her once more, this time sending her to her knees.

How could he be so cold? How had their marriage gotten to this point?

She was only 40 years old, but felt like a woman of 60. Her body had grown as tired as her mind had. They had been married for 17 years, but it felt more like a lifetime. Donnell and Kayla were wonderful children, never mind that Kevin thought Donnell was more feminine than Kayla. They lived in an exclusive gated community in Southern Maryland and she had everything a woman could want, except for the one thing every woman wanted: the love of a man.

“Yeah, book three tickets to Atlanta,” Kevin said into the phone. “I'll let Rebecca know that she will also go with us.” After a slight pause, he continued. “If you want her to go, you have to spring for her ticket. Why do you think Cheryl isn't going? I am trying to enjoy myself and take care of business and being nagged is not a part of the plans.” He laughed out loud. “Nigga, you are crazy. Holla.”

Cheryl walked in just as he finished his conversation.

“Why can't I go with you this time?” she inquired. “You always say, next time, next time, but that doesn't happen.” She followed him from the den and up the stairs to their bedroom.

“Look, I won't have this conversation with you again. I don't have time to baby-sit.”

“Baby-sit! I ain't no fucking baby. I am your wife and all I
am asking is that I go with you this time. Is that too much to ask?”

“Look, every damn time I get ready to go outta town, I gotta hear this from you. You are not going and that's the end of the fucking conversation!”

Kevin stormed out of their bedroom and slammed the door behind him.

Cheryl had planned every detail of Kevin's coming out party for K & B Alliance. She had ordered the best wine, had the best caterer money could afford, and even hired a wait staff. She had gotten her hair done and even got a manicure and pedicure. She had driven all the way to Neiman Marcus on Wisconsin Avenue in D.C. to find the perfect blue dress. Blue was her favorite color and always made her feel better.

After putting her dress on, she looked herself over in the full-length mirror and smiled. She felt sexy. Kevin had on a black Madison pinstriped suit by Brooks Brothers, which she had had tailored to fit his athletic build. He had on a midnight blue shirt with black tie and pocket square. He smelled of musk and shea butter. He had gotten his hair cut two days earlier, because he didn't like to have his hair cut on the day of an event. His goatee was neatly trimmed, just like she liked it, and he had bought himself a new Dallas star earring for his left ear. It seemed as if his light brown eyes had somehow gotten lighter overnight. To say he was as vain as any woman was an understatement. Kevin looked so good, if the guests weren't starting to arrive, she would have jumped his bones.

They opened the door to their first guests and hugged Calvin and his wife Ann.

“How are you guys doing, so great you could make it.” Kevin said as he gave Ann a polite hug and kiss.

“Wouldn't miss this for anything in the world.” Calvin said as he gave Kevin a hearty handshake and reached for Cheryl's hand and gave it a kiss.

Ann pulled Cheryl to the side and told her how much she liked her new dress and Cheryl gave compliments to Ann as well.

“Kevin so tell Ann how you managed to get this company off of the ground and keep your wife happy. Doing the same thing is proving to be a lot harder than either of us could think of.” Calvin said as they walked from the door and further into the party.

“Let's just say that you have to have an understanding and when you both understand that it is going to be better to be your own boss than to work for someone else, than the sacrifice becomes worth it.”

“I totally agree.” Cheryl chimed in as she looked lovingly at her husband.

“Man, this is over the top. Your wife is an excellent hostess. I am going to have to have Mary call her when we get ready for our next party. She pulled out all the stops,” Malik said to Kevin, shaking his hand.

Kevin heard laughter coming from the other side of the room and went to see what the crew was up to. The old crew consisted of men ranging in age from 50 to 60. They had helped to finance Kevin and Black's business. As he walked up he could hear the conversation.

“Man, you see that dress? Ooo Weee, I wish I was the material because I would be rubbing up on that all night long,” James said.

“Nigga, you crazy! But you ain't never lied. You see those shoes? What I wouldn't do to have them legs wrapped around me all night,” Joe commented. As Kevin approached, they all gave each other looks.

“Man, great party, and better scenery. You know what I mean?” James said, while slapping Kevin on the back. Kevin knew there were some fine honeys here, because he told Cheryl to make sure and invite some of her college friends. One that he wished she had omitted was her friend Dee. That girl was too ghetto for his taste.

“Yeah, most of them are single, but y'all better slow your old asses down. I am not going to be calling 911 tonight because y'all can't act your age.”

“Look young blood, if 911 is going to be called, we would be the one calling them. These girls wouldn't be able to handle this,” Joe said as he grabbed his crotch. They started laughing.

As Kevin walked off he overheard Derek say, “Y'all can have those women. If he wasn't my boy, I would be scooping her right from under him.”

“Why y'all gotta be so damn loud; but man, what I wouldn't do to have those shoes in the air all night long.” The group started laughing again, unaware that Kevin was still listening. Kevin went upstairs and saw Cheryl bending over, changing her shoes.

“What in the hell are you doing up here? The party is downstairs.”

“I'll be down in a minute, just slipping into some more comfortable shoes.”

“Put the other ones back on,” he said through tight lips.