Read Let the Wild Out Online 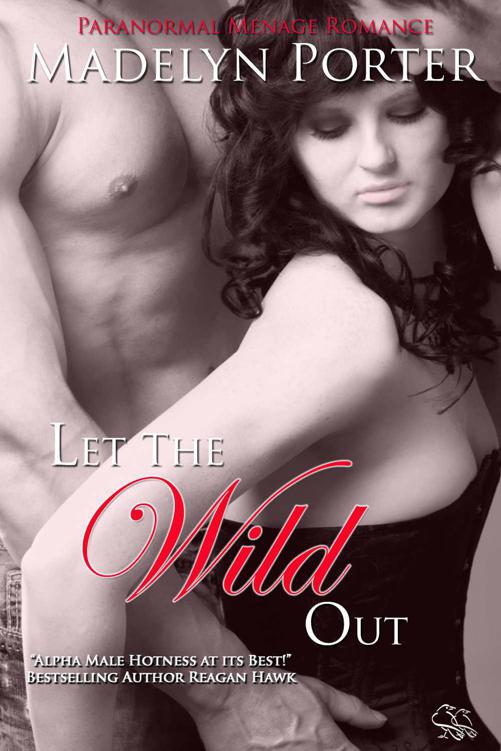 Let the Wild
Out © Copyright 2013 by Madelyn Porter

Published
by The Raven Books

All
books copyrighted to the author and may not be resold or given away without
written permission from the author, Madelyn Porter.

This
novel is a work of fiction. Any and all characters, events, and places are of
the author’s imagination and should not be confused with fact. Any resemblance
to persons, living or dead, or events or places is merely coincidence.

Published by The Raven Books

Let
the Wild Out

This is fantasy. In real life
always practice safe sex.

Rachel
Dunne thinks she's safe from the politics of her people by keeping a low
profile in America. When she comes face to face with one of the clan chiefs in
search of a mate, she’s stunned yet incredibly turned on. There is a catch—one
queen to two opposing clan chiefs. It’s hard enough fighting off the
advances of one
sizzling hot
piece of alpha
man-flesh, can she possibly resist two?

Everyone should have
at least
two lovers.

That’s what Rachel Dunne’s crazy aunt used to tell her anyway.
Her mother would have rolled over in her grave if she’d known her father’s
sister had been given custody. After her parents died, Aunt Elvie was the only
family member who could take her in. Rachel spent her teenage years under the
care of a free lovin’, spirit séance havin’, illegal herb growin’, occasionally
under arrest, Auntie Elvie. Luckily the sheriff was one of Elvie’s pot customer
slash on-and-off-again lovers, and Elvie never stayed behind bars for too long.

It wasn’t an ideal childhood. But what Elvie lacked in
modern morals and conventions she more than made up with love and patience. As
for an Uncle Elvie, there wasn’t one—there were several. Elvie rotated her
lovers like most people changed toothbrushes, and she always kept at least two
of them around at a time. Though, for their kind, such things were not unusual.

Oh, Aunt Elvie also happened to be a bird shifter. Rachel
always thought it accounted for her flighty behavior and great appetite for
life. Though, how a bird shifter could get arrested in the middle of a forest
was beyond her. Rachel suspected her aunt liked being put in cuffs.

For some reason, Aunt Elvie and her childhood had been on
her mind a lot lately.

“What kind are you?”

Rachel pretended not to hear the man who spoke, keeping her
attention on the ebook reader she held. She had seen him following her as she
left the bookstore where guest authors, Mandy M. Roth and Michelle M. Pillow,
had joint book readings. She’d felt his presence as she walked the streets and smelled
him as he came into the coffee shop. She didn’t need to look at him to know he
had dark hair and a rock-solid body. That much she’d seen from the reflection
in the bookstore window. But experience taught her to stay away from other
shifters. They had a wildness about them, an animalistic quality and a freedom
Rachel fought hard to control in herself.

“What kind are you?” The unmistakable brogue of his Gaelic
accent seemed out of place in the small Colorado town. That might account for
his forward behavior. The shifters she’d met from overseas tended to have less
puritanical ways. In America, unless on a preserve, shifters tended to mind
their own business.

Rachel glanced at the hand he pressed flat against the
table. There was no point in denying his claim. She could smell the shifter on
him, as he could on her. However, his fragrance was potent and raw. He’d
changed recently and, if the prickling sense of danger curling through her was
any indication, he was dangerous. No wild bird here. Without looking up, she
said, “I heard you the first two times, but my parents told me to never talk to
strangers. Just keep it moving, buddy. I’m not in the life and I’m not looking
for friends.”

The man turned his hand over so she could see his palm. An
ancient, circular design had been burned into the flesh with a branding iron.
It looked old, probably given to him in childhood in an ancient ritual. She
stiffened, not needing further introduction. Rachel didn’t move for a long
moment. She knew that mark. Everyone with shifter blood knew that mark. She’d
never expected to see it in her lifetime, had hoped not. As far as she’d known,
the marked ones were all living overseas, and she preferred it that way. Slowly
lifting the back of her hand to her head in a subtle gesture of respect Aunt
Elvie had taught her, she said, “My chief.”

“For someone not in the life, you know who I am.” He pulled
his fingers into a fist. “Now I asked you a question. What kind are you?”

“Trout,” Rachel lied, finally looking up at him. “My kind is
a trout. I’m diluted blood.”

She wasn’t sure it was wise to lie to her clan chief, but if
he was asking about her kind, then being a tame creature of the river wasn’t
useful to anyone. It had been a long time since she shifted, so her smell
wouldn’t be potent at all. The lie would be believable. Hopefully he’d leave
her alone now. Rachel fought the nervousness in her stomach. If he caught her
lying to him she wasn’t sure what he’d do. The stories from the old country
were brutal, practically medieval.

He slid into the chair across from her. “Trout?”

“Yes, my chief. A fish. When I change I swim in streams and
try not to get hooked by fishermen while avoiding other spawning creatures. You
can see why I’m not interested in the life.” Rachel made a move to stand,
refusing to look into his eyes in case he sensed her fear. “If you would excuse
me, I have to get to—”

“Wait.” He reached for her hand. The warmth of his touch
took her by surprise.

“Yes?” Was it just her imagination, or could she feel the
scar on his palm? Her attention focused on it, on him. Awareness shot through
her.

“Who are your family? Which clan?”

“My family is gone. My aunt, Elvie Dunne, raised me. She passed
two years back. My father, her brother, belonged to yours, the Duncanis clan. I
don’t talk to any others. Any other questions you have are better directed at
someone else. I hear there are shifters living in Colorado Springs. Perhaps you
should try there.” Rachel withdrew her hand and he let her go. “Excuse me, Chief,
but I can’t lose my job.”

“No reason to be so formal. Call me Douglas.”

She nodded, not saying his name or meeting his eyes.
Grabbing her ebook reader, she held it a little too tightly.

As she walked away, she detected his whisper, “I’ll be
seeing you, little trout.”

Douglas absently scratched at his scar as he watched the
petite brunette leave the coffee shop. A fish? She couldn’t be the shifter he searched
for. As chief of one of the two shifter clans, he needed a powerful woman, a
woman whose shifter blood was strong; a woman the other clan chief would
respect and also be willing to take as a bride. Since the Medieval clan battles,
that was their way. One bride to the two male chiefs.

As chieftess queen, his future bride would act as an
intermediary between the two clans, and none would know which father sired her
children, though occasionally the lineage could be guessed at merely by looking
at the offspring. The oldest child would go to the oldest chief, the second to
the youngest, and the third to the oldest chief again, continuing back and
forth for however many offspring there were, to be raised according to the father
clan’s traditions. For this reason, royalty never married royalty, instead
choosing a bride who showed signs of strong shifter blood.

Douglas had grown up with these facts of his birthright and
accepted his destiny. After forty years as an unmarried chief, his people were
restless for new royal blood. When the chiefs didn’t have children, his people
had a tendency to panic. Without leadership, the old battles could be resumed
and chaos would ensue. Thousands had been lost in those dark times.

Chief William of the Cononious Clan had just ascended to his
rule after his adopted father, the former chief, Tobias died. The people had
been pushing them both for a bride. In truth, he did not know William well. The
man was not Douglas’s blood brother. They had not been raised together and only
met every other year at clan rituals. Now they would be sharing a wife.

With his father newly in the grave, William didn’t have time
for the search. It didn’t matter. Douglas and William both knew what to look
for. The bride had to be strong, full-blooded and, though hardly an official
requirement, young and pretty. Though, “young” to a shifter was much different
than young to a human. A shifter’s lifespan was three times as long as any so-called
mortal.

It was too bad. The little trout shifter was pretty. She
would have definitely been a candidate if not for her diluted blood. Though some
shifters still cared about such things, his decision was more practical. With
diluted blood, she’d not live as long as he did, and she would potentially give
the chiefs less children. Since Douglas’s own mother had given birth to only
one child, leaving Tobias to adopt William, the people were anxious to
replenish the royal lines.

Bugging Out by Noah Mann
Suddenly Last Summer by Sarah Morgan
Up in Flames by Tory Richards
PRINCE CHARMING: A Secret Baby Stepbrother Romance by Mia Carson
Make Me Yours: A BWWM Billionaire Love Story by Cher Etan, BWWM Club
What Has Become of You by Jan Elizabeth Watson
The Witch Hunter by Nicole R. Taylor
Turned Out Saga by Angel M. Hunter
Akeelah and the Bee by James W. Ellison
Game On by Calvin Slater