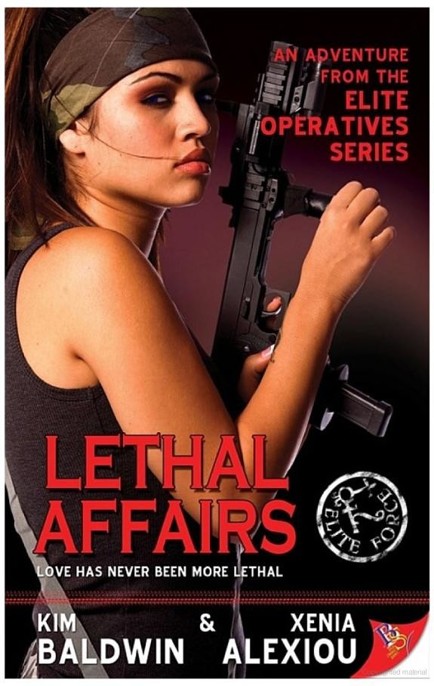 E-Books are not transferable. They cannot be sold, shared or given away as it is an infringement on the copyright of this work.

“In a change of pace from her previous novels of suspense, Kim Baldwin has given her fans an intelligent romance filled with delightful peeks at the lives of the rich and famous...the reader journeys into some of the hot dance clubs in Paris and Rome and gets a front row seat to some very powerful sex scenes. Baldwin definitely proves that lust has gotten a bad rap.
Focus of Desire
is a great read, with humor, strong dialogue and heat.” –
JustAboutwWrite.com

“With each new book Kim Baldwin improves her craft and her storytelling.
Flight Risk
…has heated action and vibrant depictions that make the reader feel as though she was right in the middle of the story …fast moving with crisp dialogue, and effective use of the characters’ thoughts and emotions...this reviewer could not put the book down. Baldwin outdid herself with
Flight Risk
...her best storytelling to date. I highly recommend this thrilling story.” –
Independent Gay Writer

“A hallmark of great writing is consummate characterization, and
Whitewater Rendezvous
does not disappoint…Captures the reader from the very first page…totally immerses and envelopes the reader in the Arctic experience. Superior chapter endings, stylishly and tightly written sentences, precise pacing, and exquisite narrative all coalesce to produce a novel of first-rate quality, both in concept and expression.” –
Midwest Book Review

“Nature’s fury has nothing on the fire of desire and passion that burns in Kim Baldwin’s
Force of Nature
! Filled with passion, plenty of laughs, and “yeah, I know how that feels...” moments, Force of Nature is a book you simply can’t put down. All we have to say is, where’s the sequel?!” –
Outlookpress.com

“‘A riveting novel of suspense’ seems to be a very overworked phrase. However, it is extremely apt when discussing…
Hunter’s Pursuit
. Look for this excellent novel.” –
Mega-Scene Magazine

“
Hunter’s Pursuit
is a...fierce first novel, an action-packed thriller pitting deadly professional killers against each other. Baldwin’s fast-paced plot comes...leavened, as every intelligent adventure novel’s excesses ought to be, with some lovin’.” –
Book Marks
,
Q Syndicate

This is a Work oF FicTion. naMEs, characTErs, PlacEs, and incidEnTs arE ThE ProducT oF ThE auThor’s iMaGinaTion or arE usEd FicTiTiously. any rEsEMBlancE To acTual PErsons, liVinG or dEad, BusinEss EsTaBlishMEnTs, EVEnTs, or localEs is EnTirEly coincidEnTal.

This Book, or ParTs ThErEoF, May noT BE rEProducEd in any ForM WiThouT PErMission.

The authors wish to thank all the talented women at Bold Strokes Books for making this book possible. Radclyffe, for her vision, faith in us, and example. Editors Jennifer Knight, Shelley Thrasher, and Julie Greystone for making every word the best it can be. Graphic artist Sheri for an amazing cover. JLee Meyer for taking the author photo. Connie Ward, consulting publicist and first-reader extraordinaire, and all of the other associates who work behind the scenes to make each BSB book an exceptional read.

We’d also like to thank our friends and first readers Jenny Harmon, for your invaluable feedback and insights, and Sharon Lloyd, whose keen eyes seem to catch every typo and careless omission.

And to the readers who encourage us by buying our books, showing up for personal appearances, and for taking the time to email us. Thank you so much.

Co-authoring a book with someone who lives on another continent can create some unique challenges, but Lethal Affairs was a labor of love from start to finish. My dear friend Xenia, thank you for entrusting me to help bring your stories to life on the page. I’m honored.

For Marty, for always going above and beyond to support my writing. You rock.
For my Father, your love and encouragement knows no bounds.
I also have to thank a wonderful bunch of friends who provide unwavering support for all my endeavors. Linda and Vicki, Kat and Ed, Felicity, Marsha and Ellen, and Claudia and Esther. You are family, and near or far, I hold you always close to my heart.

There are so many people who believed in my ability to do this that I literally don’t know where to start or who to thank first.

Kim, thanks for having faith in me and in this series. Claudia, for being my rock, and for telling me as long as I can remember that I’m a born storyteller. Dorien, Esther, Nicki, Miriam, Ro (Zus), for your constant encouragement and enthusiasm. Maria, for helping Manny sound so authentic. Dennis, for your dedication and endless supply of patience. And most of all, my family, for their support and for being my number one fans.

For my sister Anastasia. Thank you for always believing in me. Ε¯σαι η καρδι¬ μου.

weat dripped from Domino’s forehead into her eyes, making it difficult to focus. She’d been cooped up in this stifling room across the street from his hotel for four days, sitting at the curtained window with a view of Hamad Omar Hasan, the founder of an extremist group making life difficult for the American and U.N. Forces in his native Kuwait. Legal authorities had located him but didn’t have enough evidence to arrest him, so the Elite Operatives Organization had the task of neutralizing him.

Though exhausted from the heat and lack of sleep, she watched his every move through a telescope. Years of training enabled her to shut out all distractions that might compromise the operation. This first time in the field she was strictly surveillance, so she had to notice everything. It was fourteen hundred hours—two p.m.—Hasan’s usual nap time. He was lying on the couch today, though.

awn was still an hour away, so relatively few souls were already at work in the sleepy seaport capital of Malta on this cool June morning. Bakers, of course, and vendors at the open-air market, and fishermen returning from another night of casting their nets into the warm azure waters of the Mediterranean. In the Co-Cathedral of Saint John, five priests prepared for Sunday morning mass.

The massive sixteenth century cathedral was Valletta’s most important historical monument. Its lofty baroque interior and priceless art brought in tourists and had inspired Sir Walter Scott to proclaim it the most magnificent place he had ever seen.

As the eldest of the priests replaced votive candles in the chapels, he stopped occasionally to admire the ornately carved stone walls and the inlaid marble tombs of knights that comprised its floor. Stooped and balding, except for the fringed crown of gray around the back of his head that he now scratched at absently, the monsignor had been at St. John’s for thirty of his sixty-four years, longer than any of the others.

In the nave, the monsignor looked up to admire Mattia Preti’s masterpiece, the vaulted ceiling with its vivid scenes from the life of Saint John painted directly onto the plaster in fresco. He was drawn to the scaffolding around one scene and the intense concentration of the woman at work there.

Like most priests, he was a good listener in the way most people are not. He’d heard tens of thousands confess their sins and so was wiser than most in the nature of men and their ability to hide what was in their heart. And he had grown adept at hearing beyond words, at understanding from someone’s sighs and silences, postures, and expressions what they loved, or dreamed, or feared, or needed to confess.

But the young American was an enigma. He had tried on several occasions to strike up a conversation with her about her life or her work and had found her always well-mannered, almost uncommonly polite, but guarded. And her answers to his questions seemed practiced. Never spontaneous.

He had learned she was thirty-three, unmarried, and that she never knew her parents. She traveled a lot and loved her work, she said, particularly when it involved cathedrals, and she told him her time at Saint John’s had been very rewarding.

And she certainly was a dedicated and capable artisan, always there even before he was, working tirelessly, often late into the night. And the result of her painstaking efforts thus far, in the neighboring scenes, was breathtaking.

But there was much she wasn’t saying. Intense, he thought. Very earnest
.
He wondered why such an attractive young woman always appeared so lonely. Vowing to try again soon to draw her out, he resumed his preparations for mass.

Luka Madison paused to unzip the top of her navy coveralls, shrugging out of the sleeves to tie them around her waist. Beneath, she wore a black, long-sleeved T-shirt and jeans, both molded to her fivefoot six-inch frame. Comfortable sneakers completed the ensemble. Standing for long hours, day after day, seldom bothered her. She was in excellent physical condition, trim and athletically toned but not overly muscular, with dexterous hands used to long labor.

Dirty Player: A Rough Riders Novel by Stacey Lynn
A Hire Love by Candice Dow
I So Don't Do Makeup by Barrie Summy
Leona''s Unlucky Mission by Ahmet Zappa, Shana Muldoon Zappa & Ahmet Zappa
The Ex-Wife by Dow, Candice
The Girl Who Remembered the Snow by Charles Mathes
These Damn Suspicions by Amy Valenti
Brooklyn & Beale by Olivia Evans
Being Human by Patricia Lynne
A Winter's Knight: A Regency Romance by Cole, Elizabeth