Read Lie of the Land Online

Lie of the Land 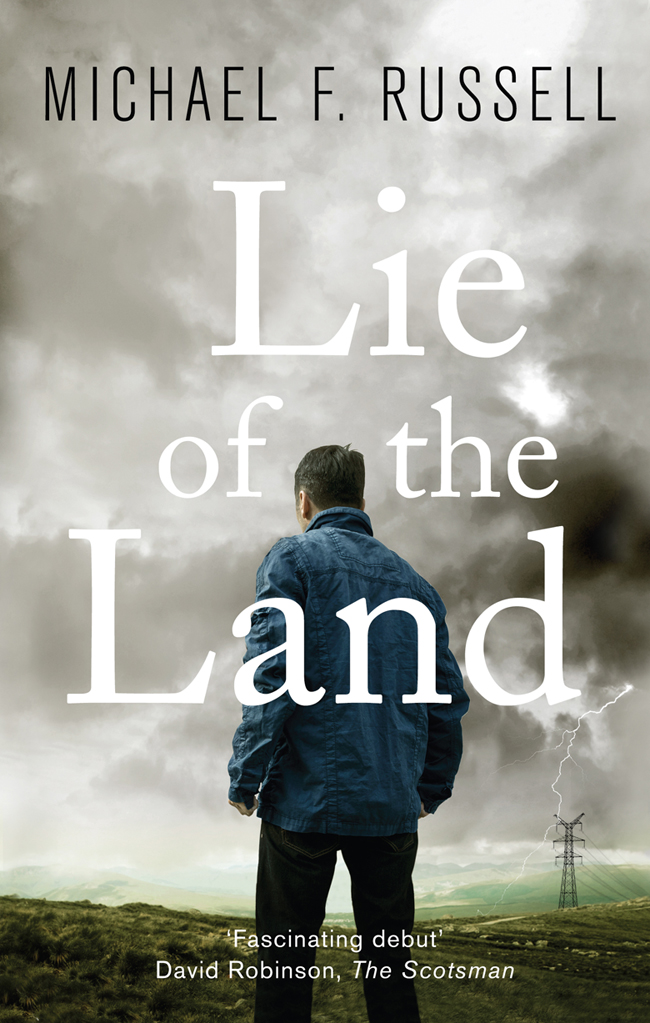 Lie of the Land

First published in Great Britain in 2015 by
Polygon, an imprint of Birlinn Ltd.

The moral right of Michael F. Russell to be identified as the author of this work has been asserted by him in accordance with the Copyright, Designs and Patents Act, 1988.

British Library Cataloguing in Publication Data
A catalogue record for this book is available on request from the British Library.

The publishers acknowledge investment from Creative Scotland towards the publication of this volume.

For Helena, Danny and Joe

Carl closed the graveyard's rusty metal gate, breathing hard, lungs aching from the effort of walking. What was it â about half a mile from the hotel? Too fast, he'd gone far too fast for a body that had spent most of a month lying flat and then a week shuffling between rooms.

Crows rasped in the trees as the wind freshened from off the sea. The place reeked of wet earth and rotting leaves. He felt light-headed, dizzy, the fresh air knifing his lungs. He coughed, hawking a gobbet onto the gravel path that skirted the graveyard.

He soon found Howard's grave, a fresh mound next to those of the two German tourists. Carl stood for a while, then dropped to his haunches and scooped a handful of earth from Howard's grave.

An oystercatcher alarm-called as it flew, arrowing level with the dark-rock shoreline. He had come to know the sound of the bird. The soil was cold and sticky in his hand.

âSorry,' he whispered, throwing the handful back onto the pile. His throat tightened. âWhy did I fucking listen to you? Why did I let you do it?' He gasped for breath. âWhere is everything? What am I doing here?'

Now that the fever had left him, realising where he was and what had happened threatened to blot out every other thought and feeling. Consciousness without purpose was now the dominant state. Never waking up at all would have been better.

Mistakes: to the nth power.

The world was dead, and he had helped kill it, in his own little
way. Call it a sin of omission. Carl could add his only friend to the list of the dead while he was at it. There was guilt enough to gorge on, with extra guilt to go. It entered his bloodstream with every breath, all washed down with a cold glass of grief.

He stood for a moment, staring down at the grave. Insects crawled on the rectangular mound of earth. They had a job to do, above and below the ground. Wind stirred the trees again, making them sway and creak. Everything had an appointed function, except him.

There was an obvious destination: somewhere he had to go. As he looked around the bay, judging distances, Carl wondered if he could make it. Going back to where Howard died meant taking one of two routes: he could cross to the south headland, on the main road, before heading inland and into the hills. But that meant going through the main part of the village. Which meant people, and the gauntlet of shock and sympathy. Or he could continue the way he had come, up the back road over the north headland. That way he'd avoid people, but it also took him away from where he needed to go, behind the village, over rough ground, circling around Inverlair and to the south. Call it nine miles of trudging through heather and bogs. That would take him hours, if he managed it at all. With no real conviction, he set off for the hard way.

On the back road up and out of Inverlair Bay, past the church and the community hall and the start of the forestry track, he made it as far as the roadblock, a line of shin-high boulders splashed with red paint. Never mind being at the edge of the world, he couldn't have gone much further anyway.

He sat on the stones, gasping for breath. To his right, over a rusty barbed-wire fence, fields of rushes and thistles sloped down towards the grey sea. He scanned the horizon for a white boat, for salvation, but saw nothing except the fusing of cloud and water.

Some way off the road was a derelict old house, windowless,
with a ragged corrugated-iron roof. To his left, the hills rose to the fissured rocky summit of Ben Bronach, and beyond, to the deer forest. After a few minutes Carl got up and, standing at the roadblock with his hands in his coat pockets, considered the road ahead. He stepped over the painted boulders.

Maybe today was the day when the world would open up again. He could drive away from Inverlair. He could leave Room 14 and Simone and the baby, today, the eighty-second day of his confinement. This would be the last day he'd have to spend here, in this prison refuge. The redzone would open. Its signal would fail.

He took Howard's deltameter out of his pocket and watched the EMF waveform on the screen, spiking at 85 microtesla today, close to the active neural level. Another hundred metres or so and, he knew, the buzzing sound would start in his head. Another two hundred after that and the pain would skewer through his head, from temple to temple. Any further and sleep was death.

Today was not the day. But he'd known that anyway. There would be no escape. Even before he took his dead friend's gadget out of his pocket to check the signal he knew what it would tell him.

The next day, he stood in Room 14's en suite, in front of the mirror. Pits of ash where his eyes had been, thick phlegm-flecked beard and limp coils of oily hair.

With a pair of borrowed scissors he cut his beard to a point where shaving could finish the job. Without hot water it stung and he nicked the skin a few times as he went, hair filling the sink, red drops on the thin scum of soap and grease. Even though the razor was blunt he managed to shave off half his beard, stopping to touch the hairless side of his face, the fever-scooped hollows where his cheeks had been. Two months ago his face had been full and he hadn't felt like a decrepit wreck of a man.

Death had looked in on him, given his lungs a squeeze, then let him go.
I'll be back later for you, pal. Take care of yourself â until I take care of you
.

Neck next, and he was done; now to complete the transformation, from stinking caveman to heroin chic all in a few snips. Reaching above his ear he gathered a handful of greasy, matted hair, and started cutting until he was right down to the scalp. Getting rid of his hair made the scab on his forehead stand out. He tried to forget how it had happened, and continued cutting. The person he'd been must be somewhere underneath this feral disguise. He must be.

That night, Carl stood on the hotel's first-floor landing. Above the dark stairwell there was a stained-glass window, red roses and green petals on a blue background, the full moon blazing the colours alive. He heard an owl hooting. This is Tuesday, he said to himself, as he gazed, open-mouthed, at the moon-bright glass. Nearly a week since the fever had left his bleached bones washed up in a single bed.

He was hungry again. Appetite had been reborn. And that was a good thing, on balance. Resurrection. Coming back from the brink. Five days he'd been up and about, and now it was time to visit the ground floor. Maybe even rejoin what was left of the human race. He was in the grip of life now. He took a deep breath and, as planned, his lungs cracked a volley of phlegm, which he spat into a hankie. In the soundless night, it wouldn't do to cough in an inconvenient place and alert anyone to his presence.

On his seventh step down, the stairs creaked. Carl held his breath, gaping up at the stained-glass roses shining in the moonlight. What did he expect to happen? Simone's dad come stomping through from the annexe, dressing gown flying, shotgun at the ready? The only sound was the clock ticking in the lobby; moon glinting on the brass pendulum as it measured the night.

It was even darker on the ground floor as Carl made his way
along the lobby past reception, through the fire door and into the annexe, cupping the candle, which he'd stuck onto a saucer. He waited a few seconds, listening out for signs of life, letting the fire door swing gently back into place. But there was nothing except his own breathing as he crept into the kitchen. It was still warm; he could feel heat radiating from the stove. There wasn't much to eat: the remains of a mushroom omelette in the fridge along with milk and some butter, still chilled, even though the generator was off for the night. And fish, of course. At least there was no question of an Omega 3 deficiency. No danger of that in this place. Insanity maybe, but at least his heart wouldn't pack in.

He set the candle and saucer down on the worktop, next to a kid's storybook. Simone kept things as normal as she could for her boy. Fair play to her.

Scoffing the greasy slab of omelette with his fingers, he saw an open black bin bag on the wicker kitchen chair. He reached into it.

The bag was full of baby clothes, sleepsuits and tiny vests. He lowered the candle to read the handwritten label taped to the bag: Under Three Months.

He laid a sleepsuit out flat on the table, adjusting the position of the candle so he could get a better look. The suit was pink with little smiling teddies on it. The bag of clothes certainly answered The Burning Question. Carl imagined the pink suit filled with a screaming, red-faced baby.

Without warning the candle fell over and went out, the air heavy with smoke.

Fuck. He hadn't melted enough wax on to the saucer.

He wondered if he could negotiate his way back upstairs, in darkness, without knocking anything over. As he visualised the obstacles, his eyes grew accustomed to the lack of light. Gathering
candle and saucer, he crept into the hallway. There were no windows in the corridor between the annexe and the actual hotel, and it was darker there, but he could still make out all the important shapes to avoid, the edge of the reception desk. And the big brass bell, on its stand by the front door, a touch of baronial charm for the tourists. Better not knock that bugger over.

He was near the annexe fire door when he heard a sound from upstairs. It was Simone's dad, George, sobbing, groaning and calling out in his sleep. Carl froze. There came another, quieter moan. Then silence.

Wanting You by Ryan Michele
The Sword and the Plough by Carl Hubrick
Raetian Tales 1: A Wind from the South by Diane Duane
Valiant by Sarah McGuire
Sacrificed to the Dragon: Part Three by Jessie Donovan
Power Play [Pleasure Playground 2] by Eliza Gayle
Fountain of the Dead by Scott T. Goudsward
White Bone by Ridley Pearson
Yours All Along by Roni Loren
Lantana Lane by Eleanor Dark