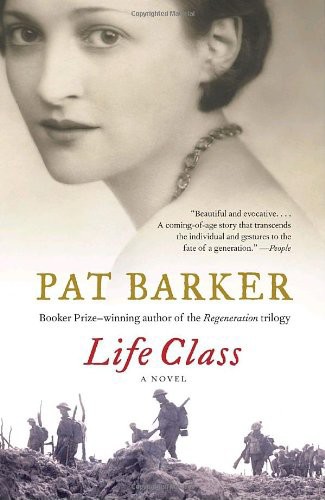 Blow Your House Down

The Man Who Wasn’t There

The Eye in the Door

They’d been drawing for over half an hour. There was no sound except for the slurring of pencils on Michelet paper or the barely perceptible squeak of charcoal. At the centre of the circle of students, close to the dais, a stove cast a barred red light on to the floor. The smell of burning coke mingled with other smells: sweat, hot cloth, cigar and tobacco smoke. Now and again you could hear the soft pop of lips inhaling and another plume of blue smoke would rise to join the pall that hung over the whole room.

Nobody spoke. You were not allowed to talk in the life class. In the Antiques Room, where they spent the mornings copying from casts of Classical and Renaissance sculpture, talking was permitted, and the students – a few of the women, in particular – chattered non-stop. Here, apart from the naked woman on the dais, the atmosphere was not unlike a men’s club. The women students had their own separate life class somewhere on the lower floor. Even the Slade, scandalously modern in most respects, segregated the sexes when the naked human body was on display.

Paul Tarrant, sitting on the back row, as far away from the stove as he could get, coughed discreetly into his handkerchief. He was still struggling to throw off the bronchitis that had plagued him all winter and the fumes irritated his lungs. He’d finished his drawing, or at least he’d reached the point where he knew that further work would only make matters worse. He leaned back and contemplated the page. Not one of his better efforts.

He knew, without turning to look, that Professor Tonks had entered the room. It was always like this with Tonks, the quiet entry. He seemed to insinuate himself into the room. You knew he’d arrived only when you saw the students sitting opposite straighten their shoulders or bend more anxiously over their
drawings. Tonks was a dark planet whose presence could be deduced only by a deviation in the orbit of other bodies.

Paul risked a sidelong glance. Tonks, bent at the shoulders like a butcher’s hook, was scrutinizing a student’s drawing. He said something, too low to be heard. The student mumbled a reply and Tonks moved on. Another student, then another. He was working his way along the back row, passing quickly from drawing to drawing. Sugden brought him to a halt. Sugden was hopeless, among the worst in the class. Tonks always spent more time on the weaker students, which indicated a kindly disposition, perhaps, or would have done had he not left so many of them in tatters.

So far his progress had been quiet, but now suddenly he raised his voice.

‘For God’s sake, man, look at that arm. It’s got no more bones in it than a sausage. Your pencil’s blunt, your easel’s wobbly, you’re working in your own light and you seem to have no grasp of human anatomy at all. What
is
the point?’

Many of Tonks’s strictures related to the students’ ignorance of anatomy. ‘Is it a blancmange?’ had been one of his comments on Paul’s early efforts. Tonks had trained as a surgeon and taught anatomy to medical students before Professor Browne invited him to join the staff at the Slade. His eye, honed in the dissecting room and the theatre, detected every failure to convey what lay beneath the skin. ‘Look for the line,’ he would say again and again. ‘Drawing is an explication of the form.’ It was one of the catchphrases Slade students sometimes chanted to each other. Along with: ‘I thy God am a jealous God. Thou shalt have none other Tonks but me.’

There was no getting round Tonks’s opinion of your work. Tonks
was
the Slade.

Paul looked at his drawing. If he’d been dissatisfied before he was dismayed now. As Tonks drew closer, his drawing became mysteriously weaker. Not only had he failed to ‘explicate the form’, but he’d also tried to cover up the failure with all the techniques he’d learned before coming to the Slade: shading, cross-hatching, variations in tone, even, now and then, a little discreet smudging of the line. In the process, he’d produced the kind of drawing
that at school – and even, later, in night classes – had evoked oohs and ahs of admiration. Once, not so long ago, he’d have been pleased with this work; now, he saw its deficiencies only too clearly. Not only was the drawing bad, it was bad in exactly the way Tonks most despised. More than just a failure, it was a dishonest failure.

He took a deep breath. A second later Tonks’s shadow fell across the page, though he immediately moved a little to one side so that the full awfulness could be revealed. A long pause. Then he said, conversationally, as if he were really interested in the answer, ‘Is that really the best you can do?’

Why indeed? Paul made no reply and after a moment Tonks moved on. At last, from somewhere, a rush of anger. ‘If I knew how to draw I wouldn’t need to be here at all, would I?’

He’d shouted, though he hadn’t meant to. All around people were turning to stare at him. Without giving Tonks a chance to reply, he threw down his pencil and walked out.

The corridor, empty between classes, stretched ahead of him. Its walls seemed to throb with his anger. The heat of it kept him going all the way to the main entrance and out into the quad. There he stopped and looked around him. What was he doing, storming out like that in the middle of a session? It was asking for trouble. And yet he knew he couldn’t go back. Students were sitting in small circles on the grass, laughing and talking, but they were mainly medical students enjoying a break between lectures and there was nobody he knew. He threaded his way between the groups and out through the iron gates into Gower Street. At first he started to walk towards Russell Square, the nearest green space, but that wasn’t far enough. He needed to get right away, to think about his future in unfamiliar surroundings, because although, in one sense, his spat with Tonks had been relatively trivial, he felt that it marked a crisis in his career.

If you could call it a career.

He’d been walking round and round the lake for over an hour. His shadow, hardly visible when he first entered the park, now trotted at his heels like a stunted child. Round and round the problem went: no talent, wasting my time, better leave now and get a job. Or would it be more sensible to wait till the end of the year? He’d always intended to spend two years at the Slade and it seemed a bit feeble to leave before the first year was over, but then what was the point of continuing when his work not only failed to improve, but actually seemed to deteriorate from week to week? It wasn’t as if he had unlimited money. He had a legacy from his grandmother, a slum landlord of quite astonishing rapacity who, by skimping on repairs and bringing up her large family on bread and scrape, had salted away a great deal of money in the box under her bed. What would her advice have been?

–
Have nowt to do with Nancy-boy stuff like art, there’s no money in that, and if you’ve got tangled up in it, lad, get out as fast as you can.

She’d been horrified when he went to work as an orderly in a hospital; real men earned their living by their own sweat and blood.

This was getting him nowhere. He found a bench and sat down, feeling the heat heavy on his shoulder blades. Craning his neck, he looked up at the tops of the trees, dark against the pulsing sun. Everything was flooded in lemony light. After a while he straightened up and looked about him, and it was then that he became aware of the girl on the other side of the lake.

A young girl, still with the childish blondeness that rarely survives into adult life, was wandering along the waterside. She was about fifteen, dressed in the shabby, respectable clothes of a maid, her only ornament a bunch of purple velvet violets pinned to the crown of her black straw hat. Sent into service, he guessed, away from her own overcrowded home. Girls that age are not easily accommodated in two-bedroomed houses, parents needing privacy, adolescent brothers curious, younger children sleeping four to a bed. This would be her afternoon off.