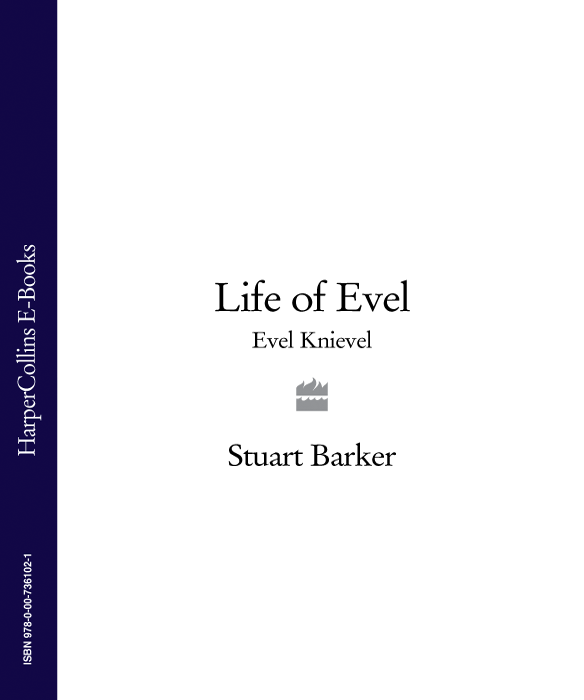 1 The Richest Hill on Earth

6 Sins of the Flesh

13 The Return of the King

Evel Knievel’s incredible career reached its literal and metaphorical apex on 8 September 1974 when he attempted to jump the Snake River Canyon in Idaho in a custom-built, rocket-powered Sky Cycle.

The world held its breath as the 35-year-old daredevil from Montana blasted into the sky at 350mph in a bid to span the three-quarter-mile chasm. It had taken seven years to plan and execute the attempt and Knievel had invested $1 million of his own money to make it happen. Audiences packed cinemas across America to watch the event live on closed-circuit television (also known as pay-per-view), and newspapers around the world held their front-page headlines. It was the most-hyped stunt in history – and it didn’t work. Knievel’s drogue parachute blew out on take-off and, after soaring a thousand feet into the Idaho sky, his X-2 Sky Cycle started drifting down towards the murky green depths of the Snake River. Once he was hidden from view of the thousands of spectators on the canyon rim, many feared Knievel had finally gone too far and had ended his remarkable life in a watery grave.

When he was rescued by boat and helicopter and returned to the canyon rim, Knievel was dazed and bloodied, and, having just bombed out of the biggest stunt event of all time, he considered retiring to enjoy the reputed $6 million he had earned from the event. But having already tried to blow a million dollars on a ‘last supper’ drinking party before the jump, Knievel needed more money to fund his extravagant lifestyle and within nine months he was back with a sellout performance at Wembley Stadium in London in what was to be the only UK appearance of his career.

Even by today’s Extreme-sports standards, Knievel’s Snake River jump remains a monumental act of daring, bravado, showmanship, courage and, for some, sheer stupidity. But whatever anyone’s personal take on the Snake River attempt, there is no denying that it represented the zenith of Evel Knievel’s career. His fame continued into the late Seventies and he carried on performing for a further six years after his most famous stunt, but never again did he capture the collective imagination of the world in such a way, nor attempt anything quite so spectacular and original, or on such a magnificent scale.

It mattered not. Knievel had already secured his title as the ‘King of the Daredevils’, the self-styled ‘last of the gladiators’, and he was being embraced by a whole new generation of skaters, snowboarders, freestyle motorcycle riders and base jumpers, among others, as the Godfather of daring – the original Extreme athlete. Here was a man who transformed what was nothing more than a county-fair sideshow act into a global spectacular; a man who had reportedly broken every bone in his body and, while that was some way from the truth, had certainly suffered more pain and injury during his 15-year career than most people could ever imagine in a lifetime.

A natural-born hustler, Knievel’s career would never have progressed from state fairs and local car-race meetings had he not possessed a Herculean aptitude for self-promotion. Right up until the Snake River Canyon attempt, Knievel handled all of his own PR, bookings and promotions; not because he couldn’t afford hired help, but simply because he knew he was the best man in the world for the job. He frequently referred to himself as a P. T. Barnum for the modern age.

Evel’s first promotional masterpiece was the jump which made him famous all over the world – his attempt to leap over the majestic fountains outside the newly opened Caesar’s Palace casino in Las Vegas in 1967. The film footage of the crash, which resulted in Evel spending 29 days in a coma, was said to have been screened over the following years more than any other roll of film since the Zapruder footage of President Kennedy’s assassination. It is certainly one of the most watched pieces of sports footage in history. Children and adults alike around the world were captivated by the gory, slow-motion images of Knievel’s body being battered, torn and crunched over the Tarmac surface of his landing area. No one had ever seen anything quite like it before, and few thought they would see anything like it ever again. Surely Knievel would never be able to ride again after such a horrendous crash, even if he wanted to?

He did ride again and he did crash again, but he always came back for more. If there’s anything that Evel Knievel stands for it’s the will to carry on against all the odds; to never say die and to never,
ever
give in. In that arena he had few peers. Jumping motorcycles from ramp to ramp may not be the most noble of careers, and neither is it a pursuit likely to affect the world in any significant way, but that does not detract from Knievel’s achievements over huge adversity and pain. His unique brand of spirit and determination could have been showcased in many arenas, the most natural alternative being motorsport, but that would have been following a trend, and that was never Knievel’s style. The very fact that he single-handedly created the arena in which he became famous highlighted the other outstanding attribute of the man from Montana: his originality.

When combined, Knievel’s courage and originality gave out the message to an entire generation that they should pursue their dreams, whatever they may be, and never give up in their pursuit no matter how tough things got and no matter how much hardship had to be endured. His own favourite and often-quoted phrase – ‘A man can fall down many, many times in life but he is never a failure until he refuses to get up’ – captured Evel’s attitude superbly, even if he never openly credited it as being an adaptation of Confucius’s proverb, ‘Our greatest glory is not in never falling, but in rising every time we fall.’

Evel’s timing in promoting such a message could not have been better, at least as far as American audiences were concerned. The country had lost its innocence with the assassination of JFK in 1963, just two years before Knievel’s first public stunt performance, and as Knievel’s career progressed, so did the conflict in Vietnam and so too did the nationwide protests against it. At the peak of his career in the run-up to the Snake River jump, the Watergate scandal piled further shame on both the US government and the nation as a whole. The American people badly needed a hero and an escape from the depressing events of the time. They needed someone who could not only provide distracting entertainment but who could give them faith in their nation’s virtues once again. For a never-say-die daredevil to come along dressed in assorted variations of the American national flag, facing danger with all the front of a real-life superhero and refusing to be beaten by pain or injury, must have seemed too good to be true. The Knievel phenomenon happened in exactly the right place at exactly the right time and the man himself had both the courage and the promotional know-how to milk the situation for all it was worth – and he continued milking it for more than a quarter of a century after his retirement.

Along the way there were excesses that would put most hell-raising rock stars to shame. Knievel was fond of boasting that he made $60 million and spent $63 million. At one time he owned 14 aeroplanes, 16 boats, five Rolls-Royces and more sports cars and motorcycles than he could remember. He lost and won millions of pounds in the casinos of Las Vegas and had his own private walk-in bank vault in Butte, into which he literally shovelled his cash.

Evel counted Elvis Presley, Frank Sinatra and Muhammad Ali among his friends, and his appetite for beautiful women was unrivalled. He claimed to have slept with over 2,000 women during his lifetime, despite the fact that he was married for 38 years.

But there were dark times too. Knievel was sentenced to six months in prison, a small proportion of which was served in a cell next to Charles Manson, for breaking a former colleague’s arms with a baseball bat. The colleague’s crime? He wrote a book about Evel which the daredevil took exception to. A $13 million lawsuit followed, but it was the shame of Knievel’s prison sentence that destroyed his reputation and ultimately his fortune, as every company he was associated with withdrew their endorsements. At the same time, the Internal Revenue Service were hunting down Knievel for anything up to $21 million in outstanding taxes. Knievel all but disappeared as the IRS stepped up the hunt.

For the best part of 15 years, from the late 1970s to the early 1990s, Knievel was neither seen, heard of nor talked about as he toured the US in a converted bus and trailer that he called home. He hustled for whatever money he could get by betting on games of golf just to buy his next bottle of bourbon. It seemed he had lived his somewhat extended 15 minutes of fame and was destined to fade into complete obscurity, with only hazy, booze-tinged memories as souvenirs of his time as one of the most famous people on the planet.

Then a remarkable thing happened. By the mid-Nineties, all those thirty-somethings who had grown up with the name Evel Knievel discovered a nostalgia for their lost Seventies youth, and suddenly the forgotten decade became fashionable again. Boot-cut denims were the new flares, satellite TV showed re-runs of all the cult, classic programmes from the Seventies; programmes like
The Incredible Hulk, Starsky and Hutch, The Dukes of Hazzard
and
The Bionic Woman
(in which Knievel himself once starred). Classic disco anthems like the Bee Gees’
Staying Alive
were being sampled by contemporary artists, and the star of the film of the same name, John Travolta, was shot dramatically back into the limelight in Quentin Tarantino’s huge box-office hit
Pulp Fiction.
It seemed there was no escaping the retro phenomenon and more and more forgotten stars of the Seventies were hunted down and brought out of mothballs to be lionised once again. Inevitably, their twenty-years-after appearances shocked many who could only remember them as the fresh-faced stars they had once been, but they were welcomed back into the limelight all the same.

At some undefined moment, the retro-mongers realised there was one very significant name missing from the Seventies celebration: Evel Knievel. What had happened to him? Was he dead? It seemed likely, given his chosen occupation and the fact that no one could really remember him officially retiring, since his career had simply fizzled out rather than ended in a blaze of glory. Knievel suddenly found himself making after-dinner speeches and being sought out by the media again. But it was the appearance of the once handsome and well-built man that shocked more than the revelation that he was still alive. Time had taken a heavy toll on Knievel, and the frail, grey-headed and bespectacled man who hobbled back blinking into the bright limelight which had for so long neglected him seemed as far removed from the King of the Daredevils as it was possible to be. Apart from the 16 major open-reduction surgeries he had gone through, Knievel’s appearance had also been ravaged by hepatitis C and Type II diabetes and he was suffering from liver failure as well as the to-be-expected arthritis. He was in poor shape for a man in his late fifties, but the fact that he was alive at all still seemed a miracle to most.