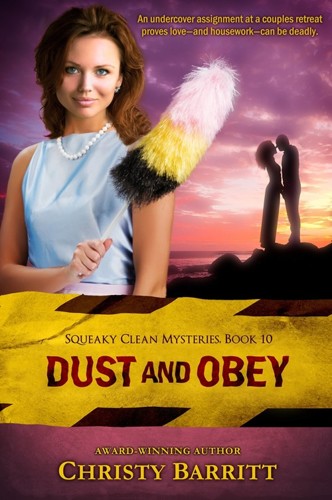 Dust and Obey: A Novel

This ebook is licensed for your personal enjoyment only. This ebook may not be resold or given away to other people. Thank you for respecting the hard work of this author.

The persons and events portrayed in this work are the creation of the author, and any resemblance to persons living or dead is purely coincidental.

Other Books by Christy Barritt

#2.5
It Came Upon a Midnight Crime

#5
The Scum of All Fears

#1
Death of the Couch Potato’s Wife

The Trouble with Perfect

The Novel in Me: The Beginner’s Guide to Writing and Publishing a Novel

Finally
my life was getting back on track. I was looking forward and not behind. I was pressing on. Running the race. Considering my trials pure joy.

Then my phone rang.

I climbed into my van, in a hurry to grab some lunch before I had to be back for the next training session for my new job, and glanced at the screen. When I saw Riley Thomas’s phone number, my nerves ratcheted from a-day-at-the-beach calm to New York City crazy. He was my ex-fiancé, the man who’d crushed my heart, turned my life upside down, and left me wandering aimlessly for the past few months.

Why is he calling me?

I cranked the engine and let some air blow on me. Unfortunately, the air was still hot. Springtime was unreasonably muggy here in Raleigh, North Carolina, and I needed all the Freon possible to help me chill.

I stared at the phone another moment in contemplation. What possible reason could Riley have to call me? I already knew he was moving back home to Norfolk, taking up his former residence in the apartment across the hall from me. Just like old times. Not that
he’d
told me that little update.

My best friend, Sierra, had been the one to mention it. Not that I was bitter about it or anything.

Just when I thought I’d gotten over Riley and the way he’d broken my heart like a Greek engaging in some celebratory plate smashing, the man decided to reenter my life. Lucky me.

I sighed and, after a moment of hesitation, decided to get this conversation over with.

“Hey, Riley.” I leaned back in my ripped seat, trying to deny the fact that my heart raced.

“Gabby.” His voice sounded smooth and warm. “How are you?”

Instead, I glanced out the bug-splattered windshield at the new facility where I’d spent the majority of my time the past two weeks. I was now working as a representative and instructor for Grayson Technologies, a leading provider of forensic equipment and supplies. I’d begun a new chapter in my life, and that should equate with hope.

“I’m glad to hear that. Listen, I know it’s been a while, but I have a proposal for you.”

“A proposal?” As soon as the words croaked out of my mouth, I wished they hadn’t. I knew how Riley could interpret them, but my quip wasn’t about a lingering desire to marry him or our broken engagement or me longing after him. I rubbed my forehead and wanted a redo.

“Yeah, you know, an idea.” His voice didn’t hold any judgment or even sarcasm, but instead he sounded earnest.

I released the breath I held. Thank goodness he’d been gracious enough to let that one slide because it could have easily made it onto my top ten most embarrassing list—and I had some doozies up there. “Okay, shoot.”

“I was going to wait until you were back in town, but I’m afraid it will be too late by then. This . . .
proposal
,” he seemed to hesitate before using the word, “actually involves this upcoming weekend. Sierra said you’d be back home tomorrow, so I’m hoping if you say yes the timing will work out.”

“I’m sorry. Our connection is lousy. Did you say you want to elope this weekend?” My words contained a slightly devious edge. This time I purposefully wanted to make him uncomfortable because I was immature like that sometimes in matters of the heart.

I heard him waffling around in agony, and I thought I’d get more pleasure from his discomfort. My negative feelings had really just risen to the surface over the past couple of weeks, and I wasn’t sure why. I suppose it tied in with the stages of grief. I had been in denial for a long time, and now I was wafting back and forth between anger and acceptance.

I prayed that I was edging closer to acceptance, but some days I questioned whether that was true.

“I’m just kidding, Riley.” I needed for him to know that I was over him and that his return to Norfolk wasn’t going to affect my mental well-being in the slightest.

In theory, at least.

Riley let out a short, clipped laugh. Had I made him nervous?

I was more curious now than ever as to where this conversation was going. “Anyway, all joking aside, what’s going on?”

“You know how I started working for the law firm up in DC? One of the law partners has a brother named Brad. Long story short, Brad and his wife were having some problems, and they went to therapy. In the middle of the process, Brad’s wife died. The police have ruled it a suicide. Brad doesn’t believe that’s true.”

“That sounds terrible and tragic, but what’s this have to do with me?”

“Well, I just happened to be telling my friend about you.”

Riley had been talking to his friend about me? Now
that
was interesting. But he’d probably just been telling a crazy ex-fiancée story. I’d given him a lot of material.

“. . . and your investigations,” Riley continued. “You’ve got a great track record for getting to the bottom of things and finding answers.”

“Yes, I do.” That was mostly because I was stubborn and sometimes foolhardy, so I really wasn’t bragging on my brilliance or anything. I also had a talent for putting my foot in my mouth and looking foolish—in the end it was a wash.

“Brad wants to hire someone to investigate his wife’s death. It will require going undercover at this retreat center. However, there’s a catch.”

“What’s that?” I fanned my hand toward my face. What was wrong with my AC? Did I even have money to fix it? And was smooth sailing ever in my future?

“It’s at a couples retreat center.”

I let that sink in quickly. “So I need to be a part of a couple? Who in their right mind is going to sign up to do that with me?”

“Obviously, you can’t go alone to investigate. You’d need someone to go with you since the program is for husbands and wives.”

“So you volunteered yourself?” I said the words jokingly, fully expecting him to deny it.

“Maybe I did,” he said, his voice surprisingly relaxed and at ease.

That only piqued my interest. It really didn’t sound like Riley. At least not like the Riley I used to know. “Go on.”

“When Brad and his wife had to . . . drop out of therapy, for lack of a better term, a spot opened up. Brad pulled some strings, and we can get in—under assumed identities, of course. The retreat takes place on the weekends at a place about an hour-and-a-half from Norfolk.”

“You’re really up for doing this?” I had to make sure I understood correctly because it was so out of the realm of what I’d expected.

I thought about it a moment. I was free this weekend. Sure, I’d started a new job, but it was part-time and I didn’t have any work to do until Monday. And I was moonlighting as a crime-scene cleaner still, but since I’d given up ownership in the company I was now free to accept or reject jobs as I pleased.

“You don’t think that would be awkward? You and I working together? Pretending to
be
together?” I finally asked, curious as to how he’d respond. There were a lot of unspoken issues between us. Knowing Riley, he had to feel awkward to a certain extent about this. He was conscientious like that.

“I think we’re both mature enough to handle it, Gabby.”

Mature
. That’s right. Doing this could prove to Riley that I was over our breakup and that I was emotionally healthy enough to be around him. In other words, I was She-Ra.

I was never one to turn down a challenge, even if it did require having my heart torn out and trampled. “I say . . . let’s do it.”

He let out a little breath. A sigh of relief, maybe? “It will be like old times.”

I could hear the pleasure in his voice, and the sound sent a shiver up my spine.

And it
wouldn’t
be just like old times. In old times, we were a couple. Now we would be two people working together,
pretending
to be a couple. I had to keep that at the forefront of my mind as I went into “Operation Protect My Heart” mode. Failure was not an option here.

“So what do I need to know?” I forced myself to focus. My lunch break was quickly ending, and I’d had no food. I rolled down the window and let some fresh air waft inside, wishing it would offer nourishment and not just comfort.

“I’ll fill you in on the way there tomorrow. We’ll have an hour-and-a-half to talk on the drive. What time will you be home?”

“Around eleven tomorrow. Does that work?”

“It’s perfect. I’ll meet you at the apartment at one. You’ll need to pack for two days overnight. And dress to impress. Most people at this retreat center make an income in the high six figures.”

Oh, I was going to fit in
so
easily there. Struggling to make ends meet came as naturally to me as walking did for most people.

I resisted a sigh. “It sounds like a plan.”

But as I hung up, I wondered what exactly I’d gotten myself into.

I could hardly wait to find out.