Read Lights in the Deep Online

Lights in the Deep 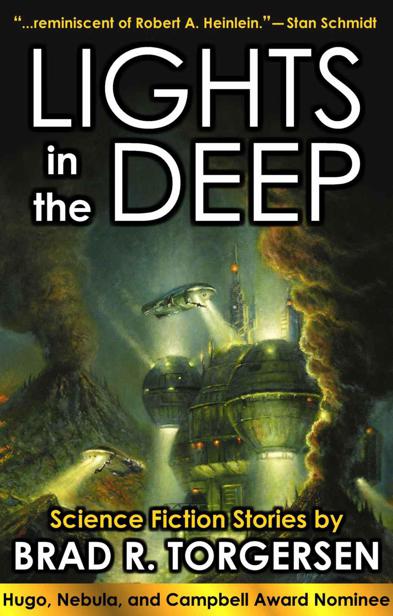 Ten astounding tales by triple award nominee Brad R. Torgersen. Go on fantastic new adventures at the bottom of Earth's oceans and at the edge of the solar system. Meet humans who are utterly alien and aliens who are all too human. Originally featured in the pages of
Analog Science Fiction and Fact
magazine as well as
Orson Scott Card's InterGalactic Medicine Show
, these stories are gathered here for the first time, along with anecdotes and other commentary from the author.

Lights in the Deep
Collection copyright © 2013 by Brad R. Torgersen

“On the Growth of Fantasy and the Waning of Science Fiction”
Copyright © 2012
(first appearance:
Writers of the Future
web site)

All rights reserved. No part of this book may be reproduced or transmitted in any form or by any means, including photocopying, recording or by any information storage and retrieval system, without the express written permission of the copyright holder, except where permitted by law. This novel is a work of fiction. Names, characters, places and incidents are either the product of the author’s imagination, or, if real, used fictitiously.

To my mother Mona, who gave me love and encouragement when I was a boy.

To my aunt Elaina, who chipped in money for workshops when I was brand new to publishing.

To my wife Annie, who supported me with patience and unflagging faith—and believes in me still.

To my daughter Olivia, who reminds me how beautiful and amazing the world can be when seen through young eyes.

Essay: On the Growth of Fantasy and the Waning of Science Fiction

When I read a story that makes a really strong impression on me, I tend to remember not only the story, but where I was and what I was doing when I read it. That doesn’t happen for many stories, but it certainly did with the first one I bought from Brad R. Torgersen.

I was sitting in the waiting area in the lobby of a big medical center, where my wife was being interviewed for a job. I had come along to give moral support in case it was needed
1
, and to do some other errands after her interview. At that time I was the editor of
Analog Science Fiction and Fact
[magazine] and my work schedule was flexible enough to easily accommodate this kind of thing. I worked mostly at home, so I just took along a briefcase full of manuscripts to read during Joyce’s interview.

These were the last days in which most of our manuscripts came in on paper rather than electronically, so the ones I took to read that day were ones that I was pretty sure I couldn’t just skim, to make sure I could keep busy even if the interview ran long. Mostly that meant they were by old pros who I knew would almost certainly grab my attention and demand a close reading, but there was also one by some guy named Torgersen who I didn’t know at all. All I knew was that I had started to speed-read his story along with a pile of slush
2
and found that it wouldn’t let me. I got hooked almost immediately, and put the story aside to read at a time like this, when I needed a small number of manuscripts that I could expect to demand—and reward—my full attention.

“Outbound” lived up to its initial promise, and then some. It’s obviously an after-the-holocaust story and a coming-of-age story, and those are a dime a dozen—but not this kind. This one had enormous scope in a remarkably compact space, but it also dealt intimately with the impact of its enormous drama on real and likable individuals. And, unlike too many post-apocalypse tales, which have little to offer but depression, this one gave reason for hope even under the most adverse of conditions. I don’t remember much about what was going on in the waiting room around me, except that that’s where I was, but I do know that when Joyce emerged from her interview I was able to announce confidently that I’d just made an important discovery.

Analog’s
readers agreed, resoundingly voting “Outbound” our best novelette of the year in The Analytical Laboratory, our annual reader poll (often just called “Anlab”). But that was only the beginning. Discoveries like that—finding myself thoroughly captivated by a story by an unknown writer—were the biggest kick I ever got out of editing
Analog.
But what was even better was when such a writer produced not just one memorable story, but a continuing stream of them.

Brad was like that. In my last couple of years at
Analog,
I bought several of his stories, and our readers liked them all. There was plenty of diversity in them, and plenty of food for thought. Sometimes military life and religion, which I don’t usually think of as my favorite topics, figured prominently in his tales, and in his hands—perhaps due in part to his personal background—they became thoroughly engaging. What all his stories have in common (or at least a little of it) is riveting portrayal of memorable but “ordinary” people doing extraordinary things under extraordinary circumstances. And he does all of that with admirably rigorous attention to the details of both human nature and hard science. The effect is often rather reminiscent of Robert A. Heinlein, but it is by no means mere imitation of Heinlein.

I was pleased to get several more of his stories, and to have readers coming up to me at conventions and saying, “How can you improve
Analog
? Publish more Brad Torgersen!” But he was producing more than we had room for, so his stories started appearing in other venues too—and you’ll find samples of them here.

I believe the last story I bought from Brad before retiring from
Analog
was “Ray of Light”—which happens to be the other “bookend” story in this collection. That one not only did well in the Anlab, but was a finalist for science fiction’s two most prestigious awards: the Nebula (given by the Science Fiction and Fantasy Writers of America) and the Hugo (given by the World Science Fiction Convention). Yet I think what impressed me most was something I saw at the next year’s Worldcon.

Worldcon always includes an art show featuring some of the best work by some of the best science fiction illustrators in the world. One of them, that year, was Bob Eggleton’s original painting for the
Analog
illustrating “Ray of Light.” It was a magnificent piece of art in its own right, which needed no accompanying commentary to command attention from viewers. But Bob had prominently displayed next to the painting a paragraph about how much he had admired the story that inspired it. Not every artist would do that—and not every story would make the artist want to.

If you look at “Ray of Light” and “Outbound” together, I think you’ll find that not only do they both fit the book’s title very well (though in quite different ways), but they have some other important things in common. I’ll leave it to you to think about what they are. They matter to all of us.

Meanwhile, I notice that “The Chaplain’s Legacy” is in the latest
Analog,
which recently came in the mail—and that while I haven’t yet read it, Joyce has. She has the best system I’ve ever seen for deciding how to vote in the Anlab: as soon as she reads a story, she gives it a numerical score, and then lets a computer rank them at the end of the year. I see that she gave “The Chaplain’s Legacy” one of her highest possible ratings—so I know I’ll have to read it soon.

But I knew that anyway—and you get to read it, along with all the rest, right here in this book. Enjoy!

2
Unsolicited manuscripts, of which we got so many that most, of necessity, could be given only a quick reading and no detailed feedback.

So let me tell you a little bit about this remarkable semi-young man named Brad Torgersen.

The first time I ever met him, or even knew of his existence, was when I handed him a trophy at the 2010 Writers of the Future Pageant. He was wearing a sharp-looking military dress uniform—not the kind jerks who have never been in the military piece together to impress girls (who are rarely impressed)— but a legitimate one with his rank and medals. We spent quite some time visiting that weekend, and he impressed me not only with this intelligence but also with his eagerness to learn everything he could about the field, and I mentally marked him as a talent to watch.

A few months later I got an assignment for an anthology of military science fiction. I remembered the man and the uniform, and I offered to collaborate with him. He did a powerful first draft, which required some rewriting, and we sold it and enjoyed some very positive reviews.

A couple of more assignments came in that played to his expertise—let me correct it: this small area of his vast expertise—and again, he did the first draft, I did the rewrite and polish…and one thing that I noted instantly was that each time we collaborated, he needed a lot less polishing than the previous time.

Devil in Disguise by Heather Huffman
Liberation (I Am Margaret Book 3) by Corinna Turner
Dave Barry's Money Secrets by Dave Barry
A Hero’s Welcome by Lauren Agony, Jan Springer
Dark Heart (DARC Ops Book 3) by Jamie Garrett
Anything You Say Can and Will Be Used Against You by Laurie Lynn Drummond
Descubrimiento by Aurora Seldon e Isla Marín
Outcasts by Jill Williamson
Nightlord Lover by Kathy Kulig
Night Music by John Connolly