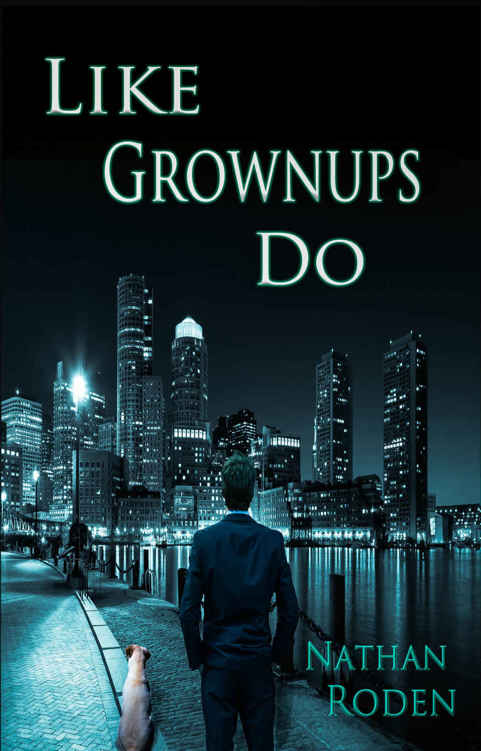 All rights reserved. No part of this book may be reproduced in any form or by any electronic or mechanical means, including information storage and retrieval systems, without written permission from the author, except in the case of a reviewer, who may quote brief passages embodied in critical articles or in a review.

Thank you to my Developmental and Copy Editor, Deborah Johnson, who is sufficiently unimpressed with me enough to provide edit reprimands that include the phrase “Shame, shame.”

Crowbar Unit—two by two on my six. Colonel Mudbaby and Lieutenant Apeshit—take the left flank. Psycho Gerbil, Major Tom—circle the old church from the east. Manson Hitler— get your scope dialed in. First movement will bring up that bell tower sniper. The rest of you fuck-tards—grenades hot and full auto ready. When we clear the church give me bangs on the south wall. Bring ‘em to Jesus.

The word escaped Cole Palmer’s lips in a burst of air at the same instant that his eyes opened.

“
Bless you,”
Cole’s rookie partner whispered on instinct, and then his eyes opened wide as he realized that both of them had violated protocol.

Both men looked over at their unit commander, who glared at them before making three crab-like hops to reach them. The commander pushed the microphone arm of his headset away from his mouth.

The unit commander’s eyes flicked back and forth between Cole and his partner, showing his concern for having two completely green agents under his command on a mission like this one.

He silently mouthed his favorite phrase before crab-walking back to his position.

Cole purposely avoided eye contact with his partner as he attempted to take a deep breath. He exhaled, his breath leaving him in a ratchet of panic.

He was even gaming in his dreams now. If only he could dream in his
bed,
that might be okay.

But tonight he was staged with his unit behind a hedgerow in an upper middle class suburban neighborhood on the outskirts of Phoenix. And rookie FBI Special Agent Cole Palmer was screwed.
So
very
screwed.

The nightmares followed him home from Iraq, almost derailing his graduate studies at Arizona State. He did not want to do the stint in the military, but it was the path that his father, his grandfather, two cousins, and two uncles had taken en route to becoming FBI agents. All of them worked out of the Phoenix field office, and the extended Palmer family operated as a single entity—spending almost every weekend and holiday together. Cole wanted nothing other than to take his place among them.

On the nights that he managed to fall asleep in his bed, the War Demons were waiting. They flooded into his subconscious with scenes of fear and horror until he was catapulted awake—back to his just-as-horrifying new reality.

Cole began taking caffeine in increasing quantities in order to stay alert in class and remain coherent long enough to study. He drank the little energy drinks, that contained God knows
what,
on an almost continual basis. He became so self-conscious about it that he would drive to different stores to buy them. He was a snake eating its own tail but he was powerless to stop.

Cole barely managed to complete the graduate work. He passed the FBI qualifying physical only because the physician was a friend and golf partner of his father. The doctor warned him about his borderline blood pressure and suggested he do what he could to alleviate the insomnia. The doctor did not document the coldness of Cole’s hands. Nowhere on Cole’s physical form was there mention of the tremors or the evidence of circulation problems that would have threatened his qualification.

Cole stole a few Adderall pills from his girlfriend’s purse after some research led him in that direction. The effects of those pills had been immediate and remarkable.

If only it were that simple,
he thought
. I’m sure that’s just what the Bureau is looking for—a few good candidates with French-fried, drug-dependent brains to ensure the safety of the country.
He spent hours lying awake and staring at a dark, swirling ceiling—performing both sides of an endless debate. He yearned to spill his guts to a doctor—a
ny
doctor. He fantasized about supernatural powers fighting against the forces that had taken over his life. His sole focus was regaining control over his own mind and body; And most importantly to him—his career.

But each night these thoughts ended in the same visitation—the vision of his father, his uncles, and his cousins—their looks of disappointment when they realized that Cole was broken. He would never join them at the Bureau because his years in a war zone had ruined him. The Bureau would not be able to trust him; such a sad, sad, pitiful figure. A failure.

Cole carefully wound his way through a few old questionable classmates, buying Adderall off of the street. He knew that this could not continue. A felony arrest would destroy him. A few weeks later he made a trip to San Diego and crossed the border into Mexico, where he bought a large lot of the drug.

The pills, while they quieted his anxiety when he was awake, did nothing to alleviate his insomnia. Cole resumed the all-night gaming that had consumed much of his free time as a teenager. He tried to distance himself from old gaming partners—most were still active. His military experience had further honed his gaming skills and he quickly became the leader of any group he played with.

Cole formed the “Crowbar Clan”, leading the group under his new tag of “The Humongous”. As it had been in his past, the hardcore do not go down for beauty rest. Stimulants were the order of the day much as he had seen in “real” battle.

The hardcore go all night. Hard.

Cole barely survived the training at Quantico. He knew better than to take his pills during the training, and the loss of chemical stimulants coupled with the physical demands drove him into an exhausted near-coma every evening. He was fortunate that he had a couple of compassionate fellow trainees who literally dragged him from his bed in the mornings and stood him on his feet.

Cole knew that he should have been euphoric after arriving back in Phoenix, amid the congratulations from this family and the pride that had his father almost exploding from his suit. But Cole was only achieving euphoria for about two minutes at a time, now—the two minutes of endorphin rush that the handful of pills provided—two minutes that gave way to his ever increasing tolerance for the drug, which left his brain to slide uncontrollably into a dull ache.

And so Cole Palmer existed for a debilitating six months.

Until tonight—tonight, he was screwed.

His team was given a quickly devised go-ahead to raid this suburban home on intelligence that a shipment of raw cocaine had been tracked out of Mexico and was being processed, cut, and packaged for distribution to the north. The front for the operation was an unassuming two-story home in a quiet neighborhood.

The wait was not helping Cole. He had slept for less than two hours of the last seventy two if you didn’t count the twenty second nap he had just snapped out of. He prayed that he would be able to camp behind the front line during this raid.

Maybe they’ll all run out to the lawn with their hands behind their heads—kneel down, cry like babies, and we can go back to the office and drink coffee and make reports.

The squatting position made Cole’s legs quiver. A drop of sweat bounced off of his forearm, though he didn’t know that he was sweating. He knew that he should be. This was Phoenix in August and the squad was dressed in heavy black protective gear. But it was not unusual for Cole to pass back and forth between sensations of hot and cold regardless of the temperature. His circulation was shot and the insomnia played tricks on his mind.

The sidewalk where he squatted was decorated with the remnants of a hopscotch grid—a few days old and multi-colored. There was an assortment of other juvenile graffiti.
Melanie is a nerd. Trevor eats cat poop. Marco and Monica sitting in a tree…

You should not be here.

Cole looked to his left and his right.
Did somebody say that?

He couldn’t tell the difference.

You’re going to fuck this up, ass-wipe.

Cole looked at his partner as his partner flexed and stretched his hands—one of the relaxation techniques they had been schooled in just weeks before.

Why am I not doing that?
Cole thought.

Because you’re bat-shit crazy,
the voice in his head said to him.

A fluttering sound over Cole’s left shoulder made him snap his head up. His eyes looked directly into a nearby street light.

Great
, he thought.
So much for night vision.

He squeezed his eyes shut for a few seconds, opening them to look down at his own legs and boots.

Something is off
, he thought.
My shadow is in the wrong place, and it’s…it’s…moving?

Cole stood, his finger reflexively selecting the desired firing option for his M4A1 carbine. He moved toward the house, purposely remaining behind the other agents. He caught movement to the left side of the house and heard a sound like the opening of a wood-framed window.

Damn it.
His partner was converging on the front door and too far away for Cole to signal him.

Cole was the only one to see or hear the activity on the side of the house. He faded across the lawn toward the left side.

There.
Two perps on a ladder, descending from a second story balcony. Cole moved to adjust his headset to contact the unit commander. When he pulled his left hand from his weapon his right hand involuntarily touched the trigger—just enough. And though he thought he had confirmed his weapon to be in single shot mode, in his state of brain fog he had selected fully automatic.

The Death Artist by Jonathan Santlofer
Love Me If You Bear: Werebear/BBW Paranormal Romance by Roxanne Sweet
Codes of Betrayal by Uhnak, Dorothy
¿Es Dios un Matemático? by Mario Livio
The Girl Without a Name by Sandra Block
House of Earth and Blood (Crescent City) by Sarah J. Maas
Absolution by Murder by Peter Tremayne
The Uncomfortable Dead by Paco Ignacio Taibo, Ii, Subcomandante Marcos
Sinners On Tour 03 Hot Ticket by Olivia Cunning
The Calligrapher's Daughter by Eugenia Kim