Read Lily and the Prisoner of Magic Online

Lily and the Prisoner of Magic 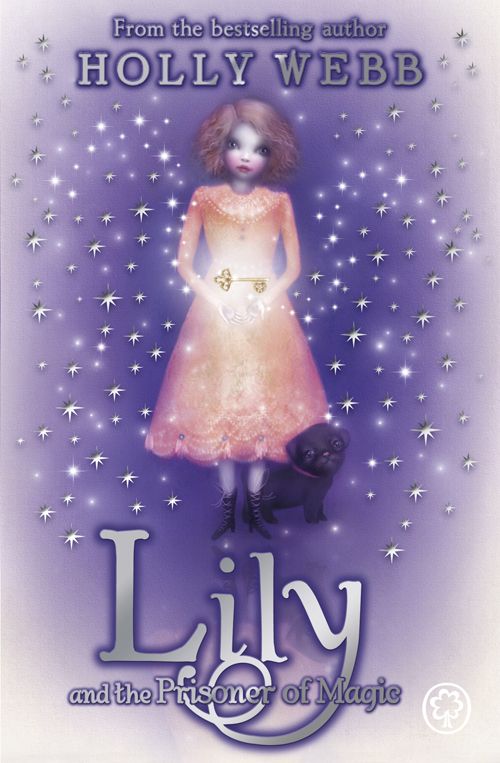 The right of Holly Webb to be identified as the author of this work has been asserted by her in accordance with the Copyright, Designs and Patents Act, 1988.

Orchard Books is a division of Hachette Children’s Books,
an Hachette UK company.

‘
N
o one’s following us?’ Lily asked, a little anxiously, peering back over her shoulder, as Fell Hall disappeared behind a row of softly curving hills.

The steady beat of the dragon’s wings didn’t slacken, even though he turned his great head to answer her. ‘Were you expecting them to?’

He sounded as though he was smiling, she thought. Lily had only known him a few days, and she wasn’t sure if dragons could actually smile. His mouth was probably the wrong shape – or perhaps he simply had too many teeth. ‘No. No, I suppose not.’ She stared down at the hills below them. They were so high up that the landscape looked like a picture in a book, dotted with delicate lines of hedges and roads. Unconsciously, she tightened her grip on the dragon’s scales.

‘Only a dragon could fly this high, this fast,’ the silvery dragon assured her. Then he was silent for a moment, and this time his wings did seem to falter a little, and Lily saw them lose a little height. The dragon had to beat his wings harder to bring them surging up again.

‘What is it?’ Lily asked him anxiously, once he was flying steadily again.

‘I had not thought… The length of time we have been – away. Many things may have changed. Are there other things that fly?’ His glittering black eyes fixed on hers, painfully wide.

‘Not like you.’ Lily shook her head. ‘Nothing like you. I was being stupid; I can’t make myself not be frightened of Miss Merganser, and the others at Fell Hall. But they didn’t have spells for flying, I’m certain of it.’

‘After what they did to you – and to your friends – being frightened is nothing to be ashamed of, Lily dear.’ The tiny old lady squashed up behind Lily hugged her tightly, and Lily had to try not to laugh. She’d never imagined being hugged by a princess, even if Princess Jane was disgraced, and supposedly dead. She patted the thin, white-skinned hands around her waist gratefully.

‘I shall fly faster,’ the dragon said firmly. ‘They must not catch up with us, and when it gets a little later, we shall have to put down and hide, of course. Too many towns to avoid on the way to London, or at least there always were.’

‘There are more now, I should think,’ Lily told him doubtfully. The dragon had last flown in the sixteenth century, and she suspected that back then even London had been rather small.

‘Of course, of course,’ he muttered, giving a little shiver of anticipation. She could feel excitement and magic shimmering through his scales. ‘So much to see. We must get well ahead now. I shall not be able to talk for a while, Lily.’

The great silver-white wings beat down heavily, and Lily gasped as they lifted even higher in the air.

‘Hold on!’ she called back to the others.

‘We already are!’ her sister screamed back to her, the words half carried away on the wind. Georgie looked as though she had practically stuck herself to the dragon’s ragged spines, she was clinging on so tight. Her light hair was streaming out behind her, and she looked like a ghost, with her pale face and white school nightgown. She had little Lottie tucked in front of her, and the child’s gingery curls had been blown into a halo round her head. She was squealing and giggling with excitement, and actually
bouncing
, as though the dragon flight was an amazing treat, like a fairground ride. Behind them, the other children clung to each other as the dragon hurled them through the air.

His smaller companions darted and twirled around them, and the silver dragon ignored their antics, only snorting occasionally as one of the other dragons shot across in front of his nose. Lily kept an eye out for the midnight creature who had rescued Peter, and was now carrying him caught up in its front claws. Peter swung and shifted as the dragon swooped, and Lily longed to scream to it to be careful. But she didn’t dare. She’d never spoken to any of the other dragons, only seen them here and there in strange visions at Fell Hall. What if they weren’t as helpful as the silver one? The black dragon had gleaming ruby eyes, and a mischievous look. It might drop Peter for the fun of catching him again.

At last the silver dragon slowed his wings, and spiralled gently down towards a patch of woodland below them. Lily watched the trees grow from something like a clump of dark green moss, taller and taller, until they swooped in amongst them, the dragon drawing in his wings, and landing in the fallen leaves with a gentle scrunch.

The children looked about them warily, reluctant to loosen their grip on the spiky frill that ran down the dragon’s spine.

The dragon turned his head, peering back over his shoulder. ‘It’s safe now, my dears,’ he purred, his voice as low and gentle as he could make it. ‘We’ll rest here until dark, and then fly on to London tonight.’

‘London,’ some of the children whispered to each other, in a sort of delighted fear.

‘We’ve a safe place to go,’ Lily promised, crossing her fingers under a fold of her nightgown. She wasn’t sure how Daniel and the other performers in the theatre were going to react to forty children. And a dozen dragons…

The other dragons were landing now, shooting in among the trees, and furling their wings gratefully. The blue-black dragon came down in an awkward fashion, with one front leg curled to his chest, and Peter pressed against his scales as saggy as a doll. He limped over to Lily, who was still perched on the silver dragon’s back, and reared up, laying Peter down in front of her. The mute boy sprawled over the dragon’s neck, staring up at Lily in bewilderment.

‘Is he any better?’ Georgie asked, leaning forward.

Lily sighed. ‘Maybe a little. He’s awake, anyway.’ She bowed her head to the black dragon. ‘Thank you – you were so clever to catch him; I thought he was lost for certain.’

The smaller dragon ducked his head smugly, and sidled away looking pleased with himself, to squabble over the best sleeping places with the others.

‘He doesn’t talk, like you?’ Lily asked the silver dragon, curiously.

‘Perhaps when we’ve been awake for longer… We’ve forgotten so much…’ The dragon’s voice was wistful. ‘I learned again, from watching the children, and talking with you and your little dog.’

The little dog shook her ears irritably, but didn’t argue for once. Flying had not agreed with Henrietta, and her black eyes were bulging even more than usual. She wriggled out from under Lily’s arm and picked her way carefully towards Peter, until she stood over him, scowling thoughtfully.

‘I’d hoped he would come back to himself, once he was away from Fell Hall. But he still seems to be bound up in those spells.’ She sounded very grumpy, but Lily was sure that was nothing to do with Peter.

Lily stroked Henrietta gently, running her fingers along her velvety wrinkles, and the little dog nudged her hand. ‘Will you be all right, all the way to London?’ Lily murmured, hoping the dragon couldn’t hear her. She didn’t want to sound ungrateful.

Henrietta shuddered delicately. ‘It may be better in the dark. When I can’t see how far down everything is. Flying is unnatural.’

Henrietta said it quite clearly, and if the silver dragon hadn’t been so big, and so noble-looking, Lily would have said that the noise he made was a snigger.

The children from Fell Hall were gradually loosening their frantic, panicked grip on the dragon’s scales now, and sliding down his sides to the ground. Several of them staggered as their feet hit the dry leaves underfoot, their balance thrown by the hours in the air.

Georgie wriggled down, loosening her clutch on Lottie, who ran off, dancing round the trees and peeping out at the other dragons.

‘Be careful!’ Lottie’s older sister, Elizabeth, hissed. ‘Lottie, don’t – don’t annoy them,’ she added in a fierce whisper, glancing nervously at the silver dragon as she hurried to follow Lottie.

‘What do dragons eat?’ Henrietta asked conversationally, leaning over the silver dragon’s spiky crest and trying to see into his eyes.

The dragon stretched, and folded his wings more carefully, as though he was settling down for a while. ‘Anything. All sorts of things… But not children, not now at least. I promise, and they do too.’

The other dragons twitched, and some of them looked quite regretful. The blue-black one pulled back in a clawed foreleg that had been creeping towards Lottie and sighed, sending out a misty plume of smoke that made the dry leaves dance and sizzle.

‘You
can
breathe fire then,’ Henrietta muttered, shifting her paws a little nervously. ‘Didn’t like to ask. Well, it’s useful, I suppose.’

The Accidental Bestseller by Wendy Wax
The King's Name by Walton, Jo
Cardinal by Sara Mack
One Night in Paradise by Maisey Yates
Eggnog and Candy Canes: A Blueberry Springs Christmas Novella by Oram, Jean
Ultra Violet by Chastity Vicks
Mercury by Ben Bova
Clash of the Otherworlds: Book 1, After the Fall by Casey, Elle
Going Rogue by Robin Benway
Serpent's Kiss: A Witches of East End Novel by de la Cruz, Melissa