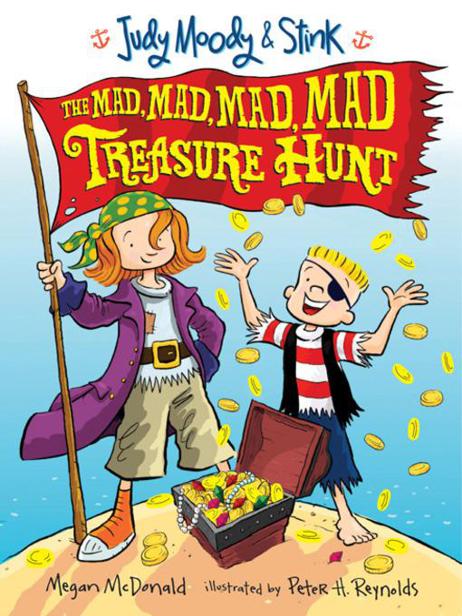 Going for the Gold

From the upper deck of the ferry, Stink peered through his spyglass with one eye. The eye not covered with a pirate patch, that is.

All he could see was blue, blue, blue. Blue sky. Blue water. Blue . . . T-shirt? His sister, Judy Moody, was blocking his view. “Hey, Judy. You make a better door than a window.”

When Judy moved, Stink focused his spyglass on the horizon. “I think I see it,” said Stink. “Vegetable Island! I mean, Artichoke Island.”

“Whatever,” said Stink. “I just want to meet pirates and look at shipwrecks and see real gold and find treasure.”

“Yeah, right. We’re only in North Carolina for a few days.”

Through his spyglass, Stink spotted Mom and Dad down on the lower deck. “Ahoy! You there, on the poop deck,” he called.

“What’s the poop deck? Wait, that’s where all the seagulls poop, right? Let me look.” Judy grabbed the spyglass from Stink.

Stink swung his arms in the air and sang like a pirate:

“Fifteen men on the dead man’s chest —
Yo-ho-ho, and a bucket of fun!”

“Hey, Stink, there’s a boy on the poop deck staring up at you. That tall one wearing the turtle T-shirt. Next to that girl with the glasses. She looks smart. And she’s staring at you, too.”

Stink sliced the air with his invisible sword.

“Fifteen chests on the dead man’s bum —
Yo-ho-ho, and a packet of gum!”

Stink pretended to walk the plank on the upper deck. The boat hit a bunch of waves. Judy hung on tight to the rail. Stink slumped to the deck, making pukey stomachache faces.

“
Arrrr!
Never say ‘puke’ when a pirate’s about to puke.”

Judy tried to think of something — anything to take Stink’s mind off the pukes. A joke! “Stink. What do you call pirate throw-up?”

“You’re like the Girl Who Cried Throw-Up or something.”

“Okay, then what do you call pirate heave-ho?” said Judy.

“No, you call it Pieces-o’-Ate!” She laughed herself silly.

“My feet itch.” Stink scratched his feet like mad. “And my teeth hurt. Do I have red blotches on me? Are my teeth falling out?”

Shiver by Deborah Bladon
Psycho Therapy by Alan Spencer
Probability Space by Nancy Kress
Inherit the Word (The Cookbook Nook Series) by Gerber, Daryl Wood
Bad Boy Secrets by Seraphina Donavan, Wicked Muse
Put The Sepia On by Feldman, Nick
The Air Singer (The Cantors) by Huber, K.
Down the Yukon by Will Hobbs
For Heaven's Eyes Only by Green, Simon R.
Wildcard by Cheyenne McCray