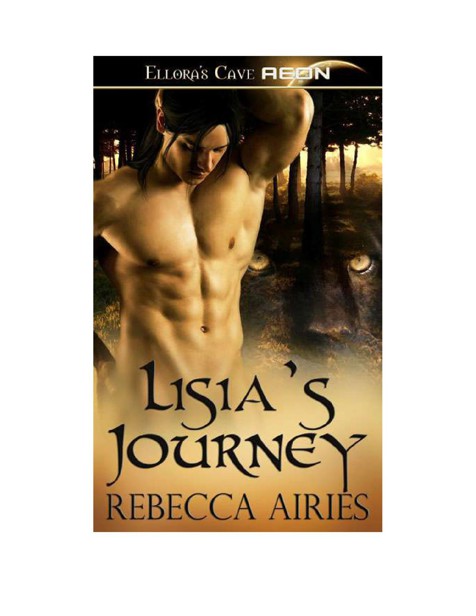 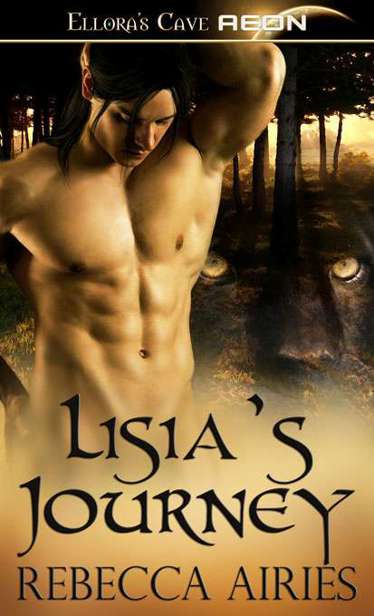 Lisia Fariel only wants to go home. She‟s willing to try anything to get there. She

never expected to meet a large
Aridi
male or to feel such a connection to anyone, much

less someone so handsome, dominant and possessive.

seems to stay long enough to do anything. Finding a female
Aridi
helping the United

Defense Alliance gain access to the planet is surprising, but even more so is the

connection he feels to her. He‟s not going to let this beauty slip away from him when

the tie between them is so strong.

Lisia‟s determined to resist his attempts to bond them together, but Jarritt isn‟t

making it easy to ignore the attraction. Toss in the threat of space pirates and suddenly

The terms Romantica® and Quickies® are registered trademarks of Ellora‟s Cave Publishing.

With the exception of quotes used in reviews, this book may not be reproduced or used in whole or in

part by any means existing without written permission from the publisher, Ellora‟s Cave Publishing,

Warning: The unauthorized reproduction or distribution of this copyrighted work is illegal. No part of

this book may be scanned, uploaded or distributed via the Internet or any other means, electronic or

print, without the publisher‟s permission. Criminal copyright infringement, including infringement

without monetary gain, is investigated by the FBI and is punishable by up to 5 years in federal prison and

a fine of
$250,000. (http://www.fbi.gov/ipr/).
Please purchase only authorized electronic or print editions and do not participate in or encourage the electronic piracy of copyrighted material. Your

support of the author‟s rights is appreciated.

This book is a work of fiction and any resemblance to persons, living or dead, or places, events or locales

is purely coincidental. The characters are productions of the authors‟ imagination and used fictitiously.

To the fellow dreamer in the family, good luck on your journey. May your dreams

Thank you for the help and the support when I needed it.

To my editor, Helen, thank you for being so fabulous at your job and for suffering

through the “huh” moments so that the readers don‟t have to do it.

The blaring horn sounded, breaking the relative silence and sent birds darting out

of the trees. Lisia jumped. The loud noise startled her and made her ears ache, but she

leapt forward and ran toward the obstacles that filled the clearing in the lush forest.

Even after hearing it when the first man ran, the jarring sound surprised her. She didn‟t

know how the other
Aridi
stood it over and over again.

She wasn‟t exactly dressed for the complicated course, but when she‟d decided to

simpler. This definitely wasn‟t simple and she had a feeling that more was going on

than some power game. That didn‟t concern her though and she pushed back the

curiosity. She wasn‟t going to be here long enough to need to know about the politics

and manipulations that went on behind the scenes.

under the time limit to fulfill her part of the deal with Lieutenant Commander Carson.

She sprinted forward grabbing the first flag as she leapt over the low, dark brown brick

It shouldn‟t be that hard, the course was enough like the ones at home that she‟d

spotted all the flags. Even the flags that had been half hidden by the bushes. That had

been her second clue that something was strange on Enoch. The man in charge was

doing everything he could to make sure the time wasn‟t broken. His methods bordered

on outright cheating. Nothing had been said about concealed markers.

second. Rolling into the short tunnel covered by a mound of dirt, she grabbed it and

focused on the next barrier, the wall. She felt a tug at her right leg and heard a small rip.

of her favorite pairs of pants.

She climbed the man-made rock wall plucking the flag off as she flipped over it.

The fast pace, exertion and challenge set her pulse racing. She enjoyed the thrill and the

test of her skills. It was something she hadn‟t experienced in a while and it was better

than the fear and worry she‟d felt over the past few weeks.

The fourth flag hung amid the leaves of a squat thorny bush, but she grabbed it

ignoring the scratches on her palm. Annoyance rose, but she focused on getting to the

next flag. She snatched the fifth from the top of a pole and plucked the sixth flag as it

fluttered in the gentle wind midway up a slope.

freely. A simple course like this shouldn‟t make her breathe hard. She reached the top of

the incline and jumped down from the edge to the base of the wall bracing the slope.

She found the flag in the water-filled rut behind it. Slogging out of the brown liquid, she

noticed the mud on her black knee-boots and her pants. If she didn‟t need the

Lieutenant Commander‟s help, she‟d make him pay to replace them.

With a not-so-silent curse, she ran for the eighth and ninth flags, on opposite ends

of a climbing net. She bypassed the simple rope swing to grab the tenth flag off the

corner of the platform. Jumping down, she landed lightly and grabbed the eleventh

before leaping the final short wall.

Satisfaction coursed through her as she saw the brown-haired man‟s dropped jaw.

The
Aridi
man had shown he was a fool from the first. He was one of the few shifters

who considered humans weak. She hadn‟t met many
Aridi
who felt that way. It gave

her a thrill to surprise him. He clearly hadn‟t expected anyone to finish in time.

It wasn‟t her fault he didn‟t know she was also an
Aridi
. She hadn‟t done anything

to hide it. The open space and the fact that she was with a group of humans would go a

long way to masking her scent, but now that she‟d worked up a sweat, her scent would

be stronger. There were ways she could hide her smell, but she hadn‟t done it. Basically

because she didn‟t expect to be here that long. She wanted to get her job done and go.

just so no one would complete the course. If she hadn‟t expected trickery, she might not

have taken the time to spot them all first. At her first sight of the man claiming to be in

command, she‟d known there was something wrong.

Shi’an
, a clan leader usually had. He definitely didn‟t have the attitude, the carriage of a

man accustomed to holding and using power. He was just too damn perfect-looking to

have fought in more than a handful of fights. It was obvious he wasn‟t the leader he

was pretending to be. That and his clear disdain for the Universal Defense Alliance

soldiers were enough to warn her. According to Lieutenant Commander Marsh Carson,

they‟d asked for UDA help. A man like him wouldn‟t ask for help from someone he

That wasn‟t the only thing that had raised her suspicions, but it had been enough to

make her very wary. The men who‟d met them at the shuttle had been much too young,

too inexperienced for the guards of a colony out on the edge of known space. She‟d

never heard of a group of
Aridi
out this far.

the palm of a young guard standing to her left. Smirking, she waited for the man

running this test to find his tongue. She smoothed her hands down her sleeveless blue

shirt, brushing at a bit of dirt on it as she waited. The shirt at least looked salvageable,

but the pants were probably ruined.

“It seems you beat the time and managed to find the flags. Was the course

challenging for you?” The man‟s lips compressed into a thin line and he glared at her,

his body half turned away from her as if he really didn‟t want to look at her.

She held the growing laughter inside when she wanted to let it flow. His fast

clipped words told her even before she caught his scent that he was furious. He wanted

to force them to leave but was held by his word.

“No, the course was a little easy. I didn‟t expect it to be that simple. Are you the

Shi’an
of this group?” She cocked a hand on her hip and smiled. She knew that it would

irritate him. His irritation was probably the only satisfaction she‟d get out of this little

jaunt other than a trip home.

Curiosity spurred the question. Well, that and a wicked desire to see him squirm.

She wanted to see how he‟d react to it. From the sharp glance of the young guard to her

right, she already knew the answer. He definitely wasn‟t the
Shi’an
, not even one of

them if they had shared ruled here. How far would he go with his lies and half-truths?

“What do you think?” The man threw his shoulders back and puffed out his chest

as he did his best to give her a quelling look.

“I think that any man who won‟t openly claim his position has something to hide.”

Lisia smiled, not at all intimidated by the young fool.